Have there been changes in ownership or management at Gourmet Noodle house?

I went there last night hankering for some Shanghai style noodles, but noticed they had added Chonqing xiao mian to the menu and couldn’t resist checking out their version ([pretty good, for $7.95]
(https://goo.gl/AdZWei)).

There was also a sign in the window announcing another new addition, Wuhan Sesame Noodles (presumably regan mian) More significantly, on each table, in addition to the regular Shanghainese menu, was a separate laminated menu featuring Wuhan spicy duck necks, other duck parts, and accompanying snack items typical of what one might find at a Wuhan duck neck joint. The menu is identified as “Hot Spicy Dips” (Ma La Tang in Chinese) but bears the name “Gourmet Noodle House” in small print at the top of the menu, so I guess the restaurant is doing double duty and perhaps should be added to @Hyperbowler’s list of Hubei restaurants.

I didn’t recognize the server, a slender, cheerful woman who spoke Mandarin but not Shanghainese, though I previously had been only been to GNH at lunchtime, and she may have been there all along,. There also seemed to be a change in the crockery and utensils; my soup was served in a plain white ceramic bowl with a rustic wooden spoon.

There’s been no change in the ABC license; it’s still identified as “GS Riverside Grill.” 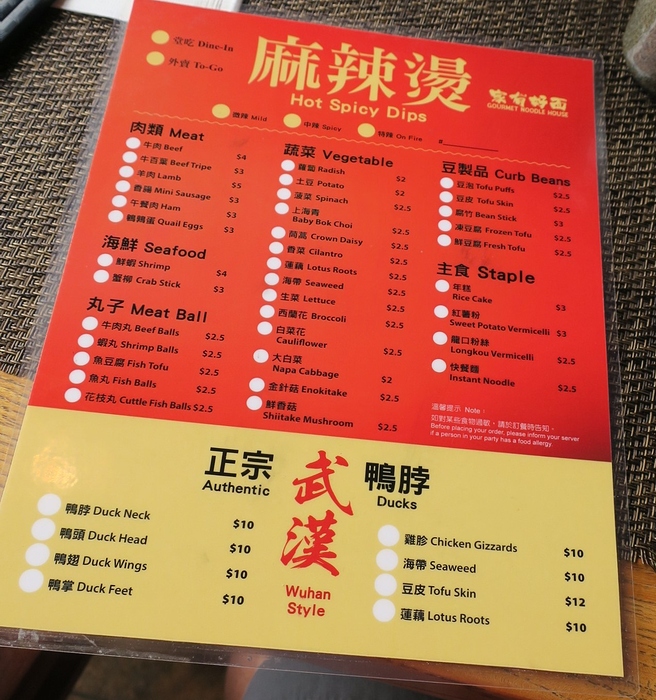 Great blog, Gary! I always enjoy your posts. It’s nice to see I can enjoy all your noodle-musings in one place. Love the play on words!

Interesting. I’m also interested to know if there’s been a change in the kitchen. With the caveat that it was (1) takeout and (2) dishes every local Shanghainese place has so perhaps dishes they always would phone in, I had overly oily, salty, and lacking in char rice cakes with pork and Shanghai style fried noodles (not the thick kind).

woman who spoke Mandarin but not Shanghainese,

What is Shanghainese? I thought it was Mandarin or Cantonese, as far as language and translation in the U.S.

I ask because when I shop at Chinese markets for obscure items, I try to have a list with pictures and Chinese characters indicating what I’m looking for (dried scallops, lily buds, etc.).

Often, they have to find the one person in the entire market that can read the characters on my list. I have never studied Chinese, so I can’t see the difference.

Btw, I think your posts are very interesting, and am learning a lot about SF history and food. Thank you.

My wife is Shanghainese and I know enough of the dialect to curse or order food. (Most Shanghainese these days understand Mandarin too, but knowing a little Shanghainese is a great way to earn some postive vibes in a Shanghainese restaurant.)

The Life and Death of Shanghainese

Spoken: there are hundreds of dialects in China, like Gary mentioned, Shanghainese is one of them. Mandarin is the language for official business in China, and I believe originated from around Beijing. But populations in various provinces often learn it either as a second dialect (in addition to their own) or as the first.

Written- simplified Chinese was invented by the Communist Party in the 1950s after they took over China in 1949. Traditional Chinese was used by Kuomintang and the imperial dynasties in China, and is still used officially in Taiwan, Hong Kong, and Singapore.

I know enough of the dialect to curse or order food.

Which is how one generally learns a language when entering a foreign land.