I was blissfully unaware of this place opening almost two weeks ago until Tablehopper’s eagle eye spotted a solitary Yelp review (which hasn’t even made it into Yelp’s new business listings section). I went to check it out at lunch today.

It’s called Jia You Hao Mian (roughly “Good home-style noodles”) in large Chinese characters on the sign and “Hu Wei Chuan Mian Guan” (Traditional Shanghai Flavor Noodle Shop) in smaller characters above. That, and the noodle repertoire presented on the menu, made it obvious that it’s my kind of heaven, but since it’s thoroughly Shanghainese I felt duty bound to first vet the xiao long bao and the xian dou jiang (another Shanghai favorite). I’ll get to the noodles very soon (and maybe very often).

Gourmet Noodle House was nearly full shortly after 1:00 when I arrived with mostly Chinese diners, some speaking Shanghainese, so word of mouth seems to be working for it. I wasn’t able to get much info from the sole harried (Shanghainese) server beyond confirming that the xao long bao, like all the noodles served, are made in house.

The xiao longbao tended more toward the Nanxiang/Shanghai style than the Nanjing tang bao style, with thicker wrappers, less “soup” and more meat. If I had a major criticism, it would be that the meat balls inside the dumplings were too firm and chewy; the XLB also seemed under-flavored, but my head cold may have been partly responsible for that. It been a while since I’ve surveyed the state of xiao long bao in SF, but I doubt that these would be at the top of the list.

The xian doujiang, deceptively listed as “Fresh soy milk (salted)” on the “Drinks” menu, was a valiant effort but didn’t nearly approach the excellent version at Shanghai House (which is only available on weekends). It lacked brine shrimp, and it, too, seemed a little timid in flavor (perhaps needing some MSG). A few drops of chili sauce (from a Crystal Hot Sauce bottle!)

As my wife told me pointedly when she was helping me with the sign translation, I probably shouldn’t be ordering something other than noodles there in the first place, so I’ll withhold judgement until I’ve done my due diligence in that area. There’s a bowl of yellowfish noodle soup with my name on it there, methinks. I returned today to start on the noodles, beginning with the yellowfish noodles (N4 Special Yellow Croaker W/ Noodles Soup). I’ll be posting a fuller account in my blog and here after the Christmas dust clears, but suffice it to say it compared favorably with the best versions i’ve had of this classic in Shanghai, and I am very encouraged by this experience. 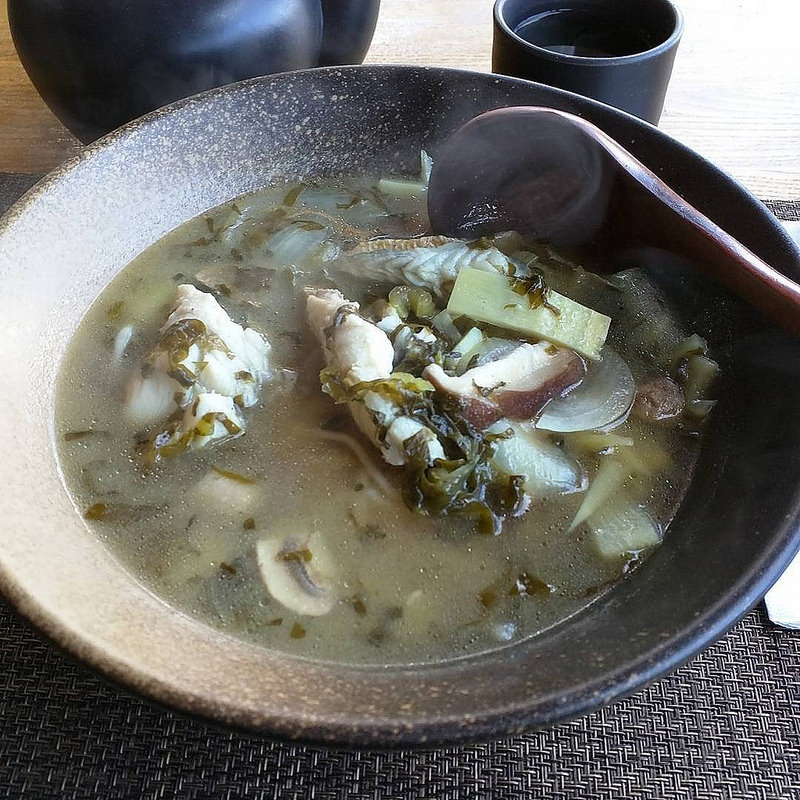 I also ordered and was pleased by the Fried Tofu side dish (served with onion and jalapeno slices), a bargain at $3.95. 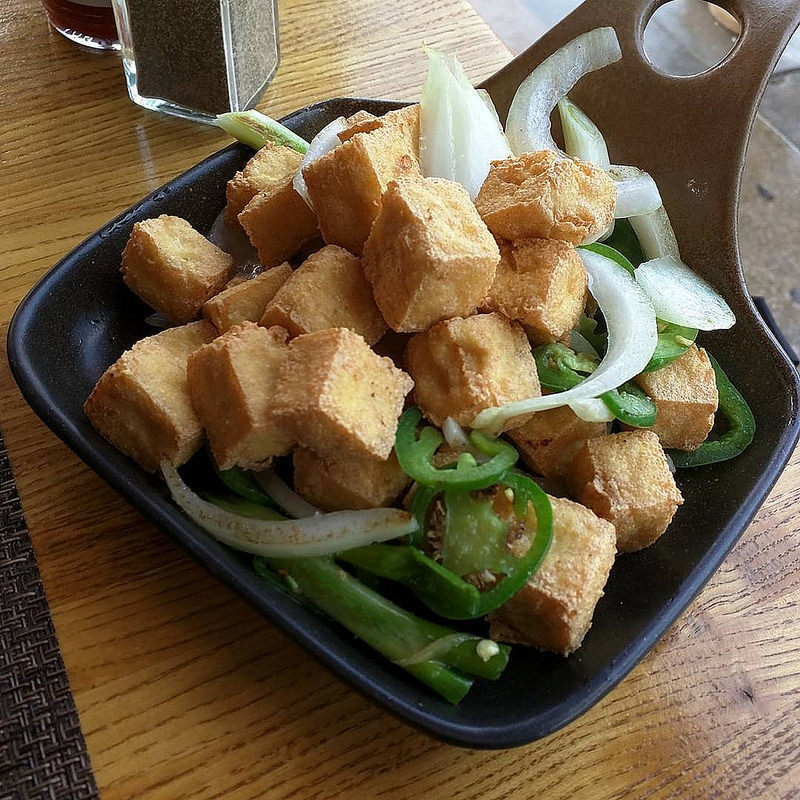 fyi, Y…p is discontinuing the new businesses section for most cities. those that have them will have at least a 2 weeks delay in posting.
reason cited is the fake review on a new el cerrito eatery Tsai (what the fork?) couldn’t find.
hearsay higher ad rates will be in effect soon.
-no doubt new eateries with numerous 5 stars reviews won’t be seen on Y… new business page

Exciting! Here are some menu pics 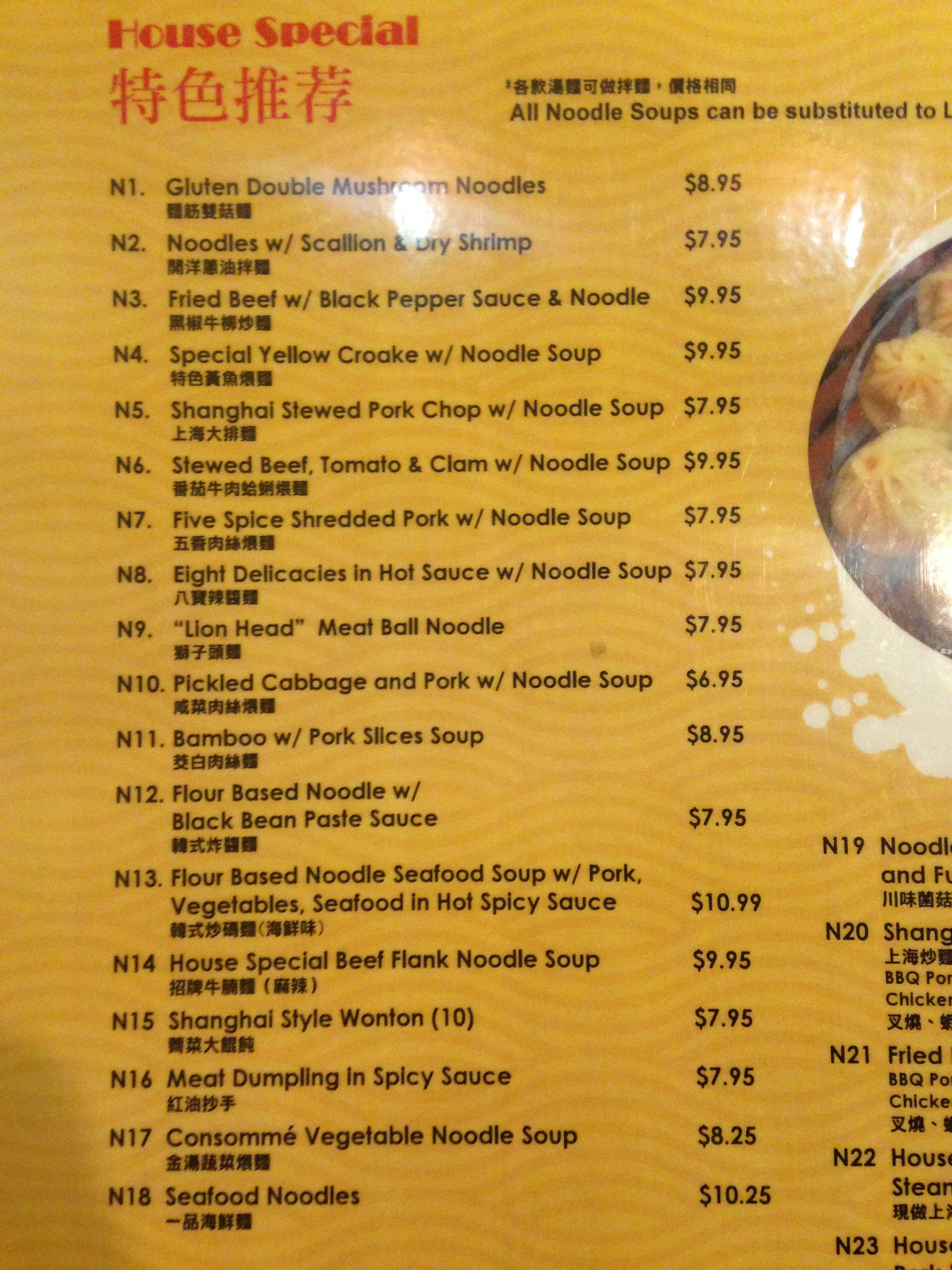 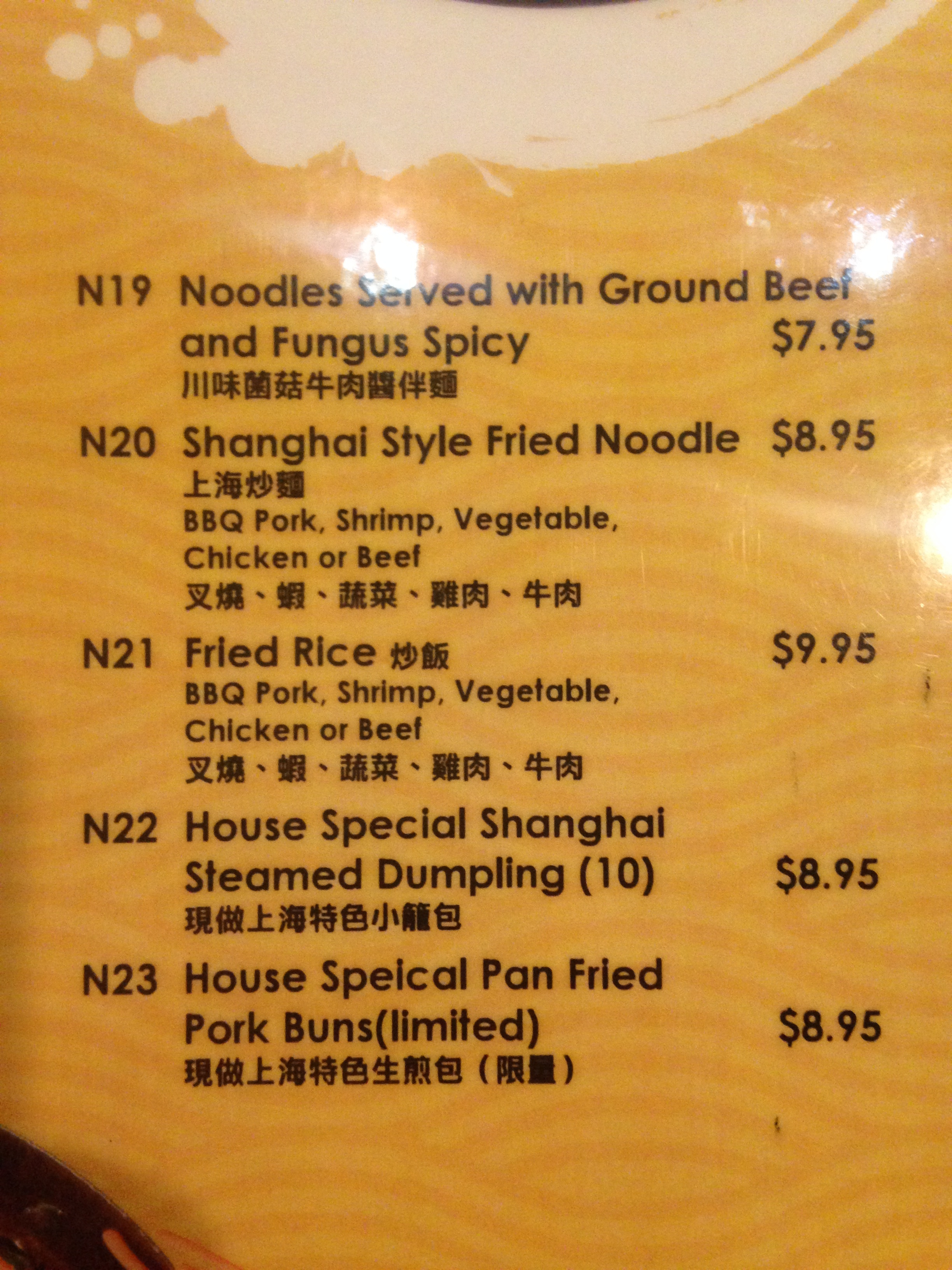 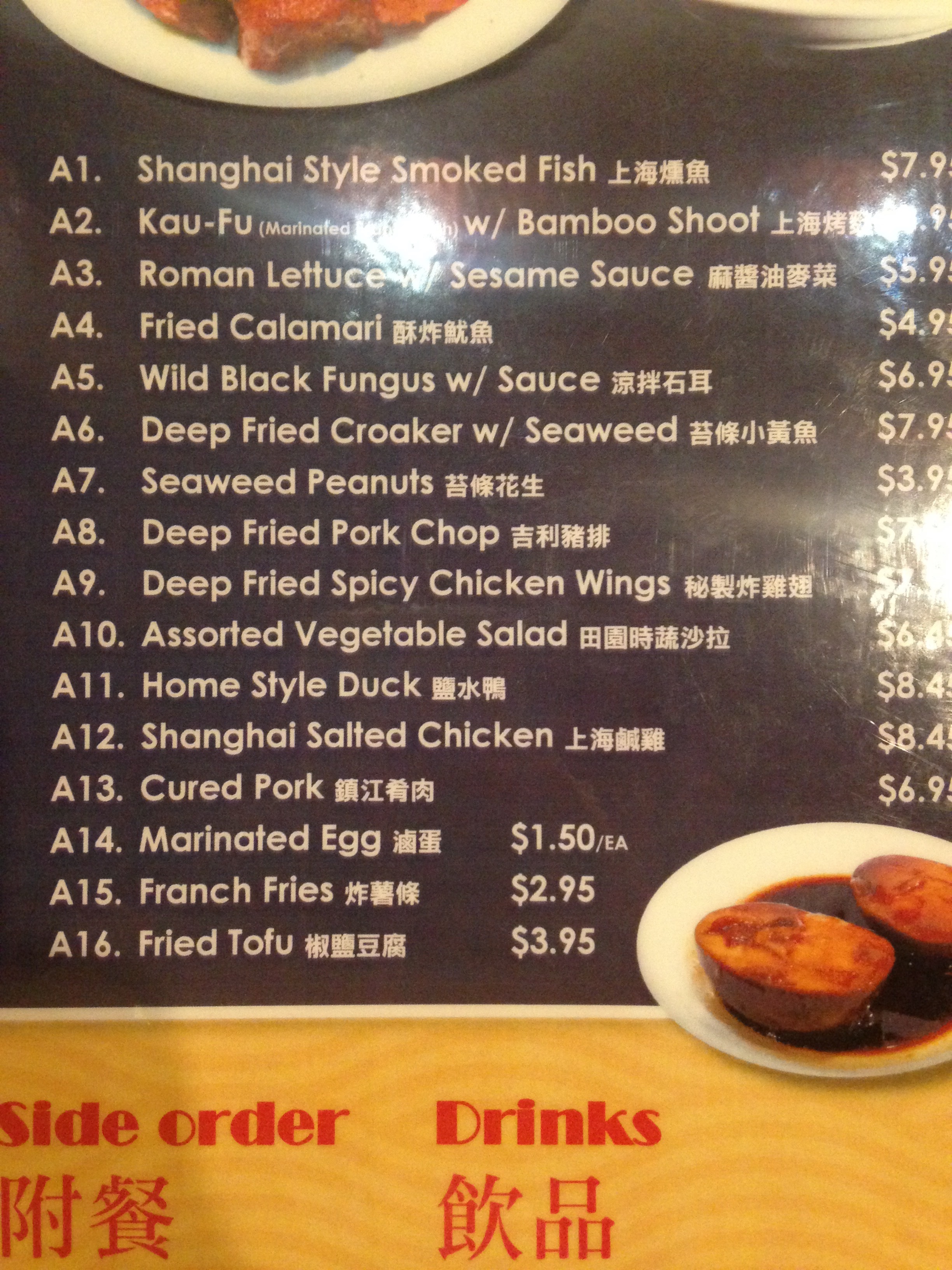 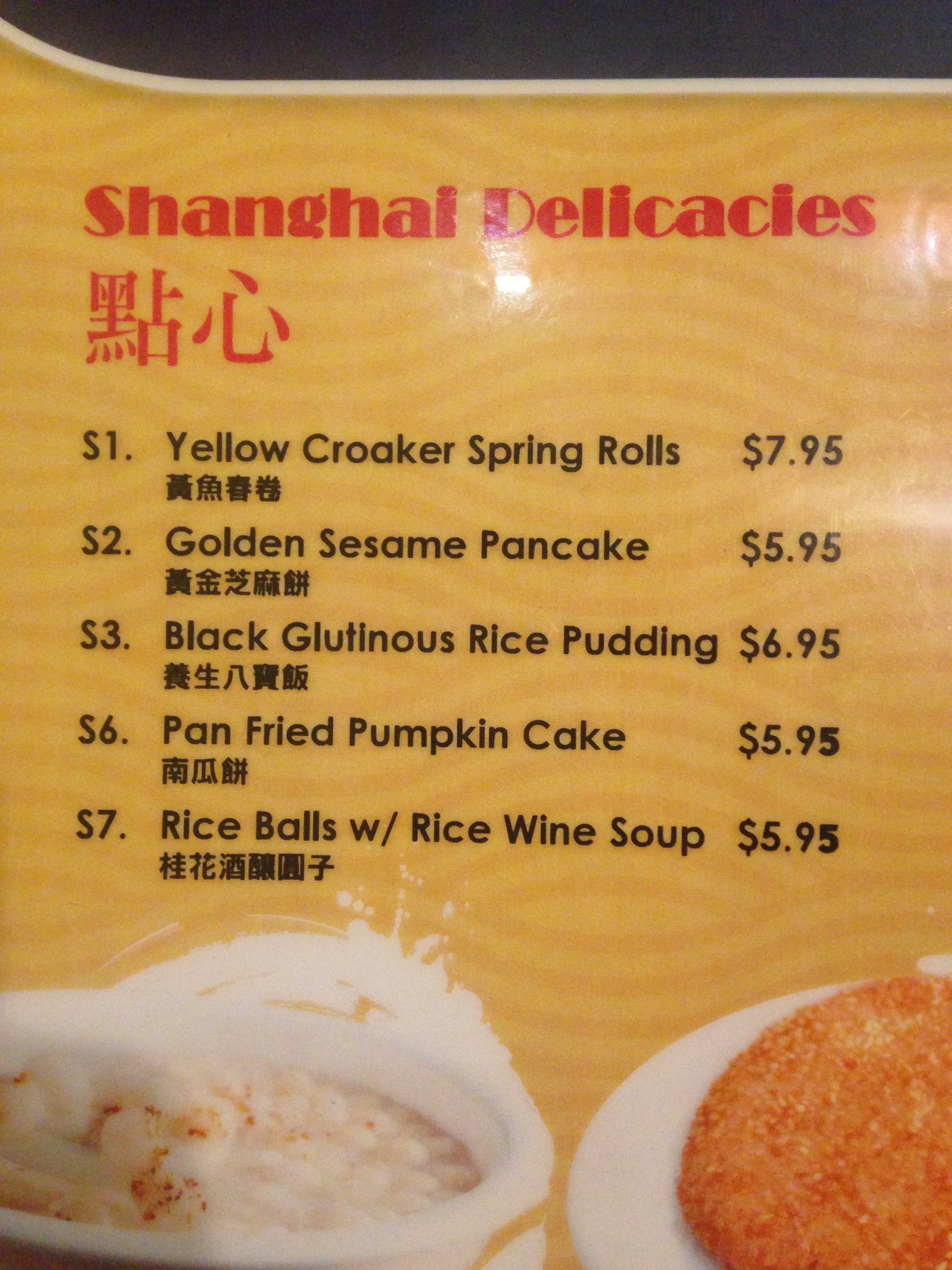 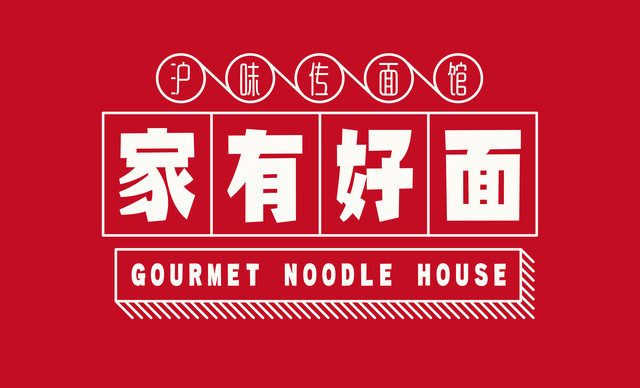 You can ask them the question. They are probably a knockoff chain- all 3 sets of fonts, chinese and english in their logos are different from the original you pasted above.

They look like they got some fancy placemats though- look like Chilewich, which are expensive stuff… or maybe those are knockoffs too.

What other noodles on the menu you think would be good to try next?

Just had the pork chop noodle soup. Really great broth, but sorta bland noodles. I also had the XLB, which were as Souperman described, although I thought they were okay. Would order them again on future visits.

Overall I was pleased with the meal and will come back. It is certainly an enormous improvement from the fusion burrito spot it replaced. 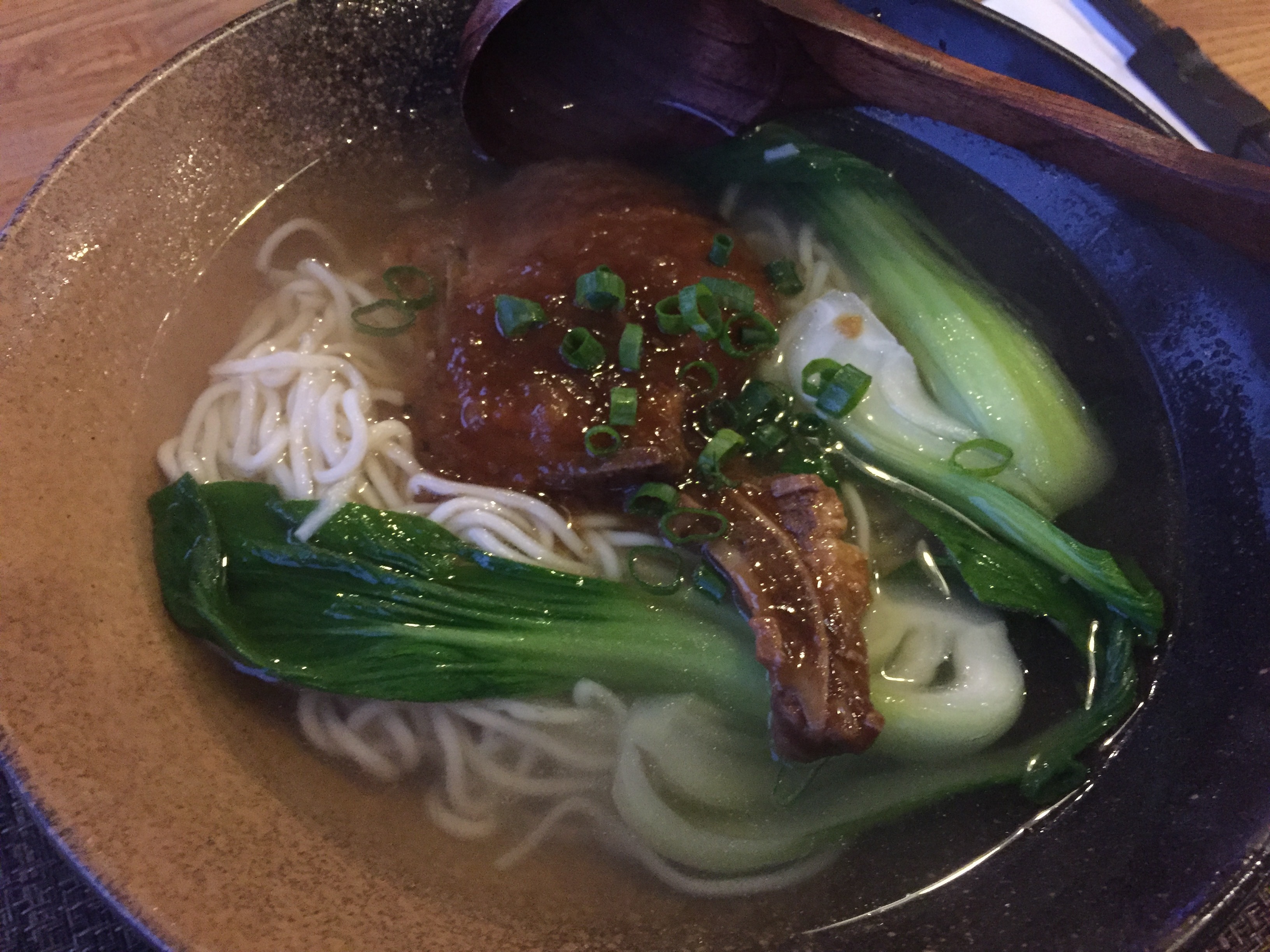 Nitpicking (but not if you suffer from celiac diisase): kaofu is not tofu, but wheat guten.

Thanks for the correction on the wheat gluten A2.
We enjoyed N14 - very spicy with beef…and the N4 lo mein with the boneless yellowfish.
Each xlb was tasty with soup, not dry at all - arriving at the table after both the N4 and N14. Small gems.
Service is very friendly. 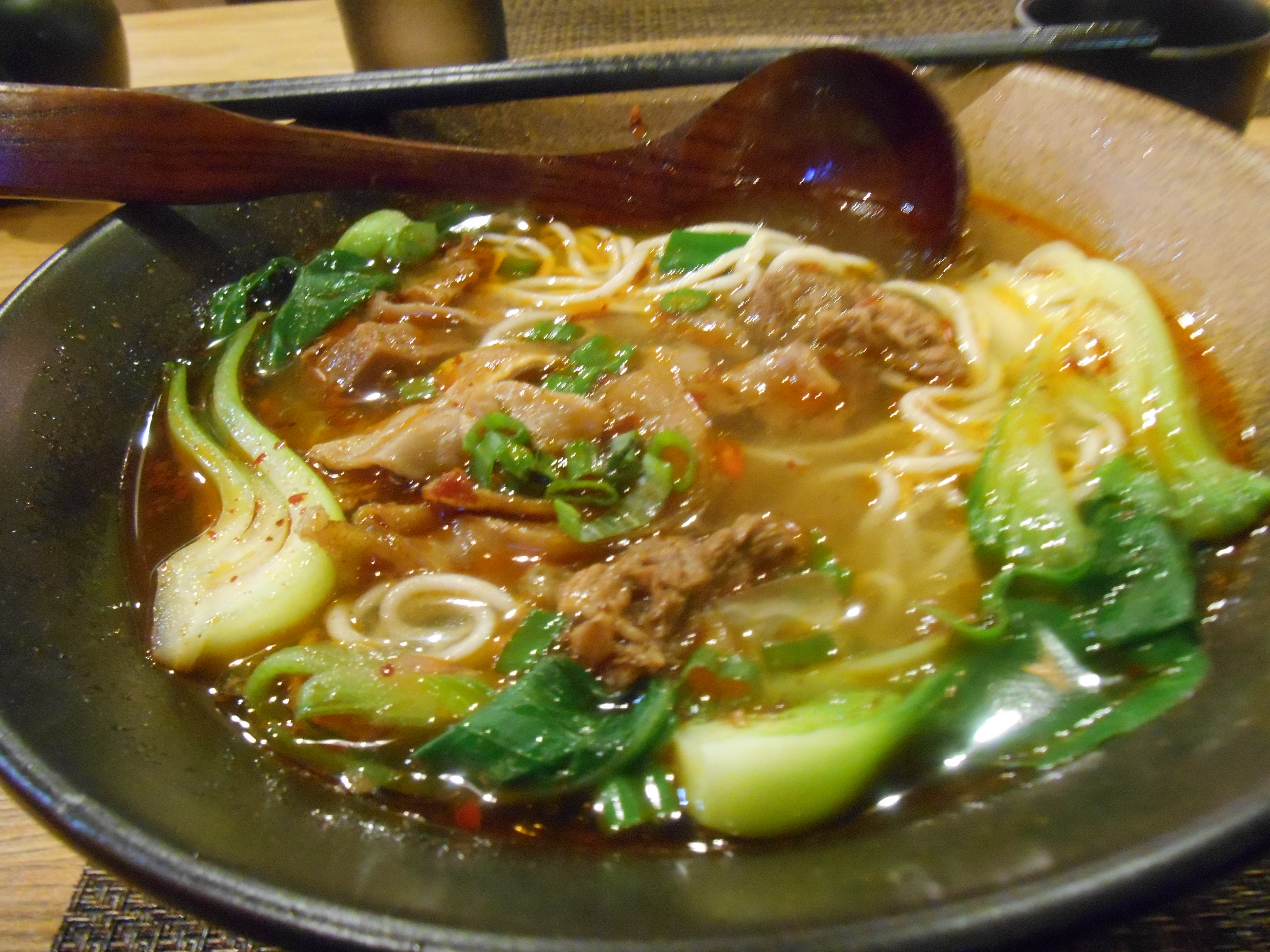 This is N14 - House Special Beef Flank Noodle Soup - steamy and spicy to warm the cockles of your heart. It also made my nose run, and my eyes tear - all good.

I returned today to try the spicy House Special Beef Flank Noodle Soup Cynsa37 wrote about and picked up a couple of bits of intelligence: 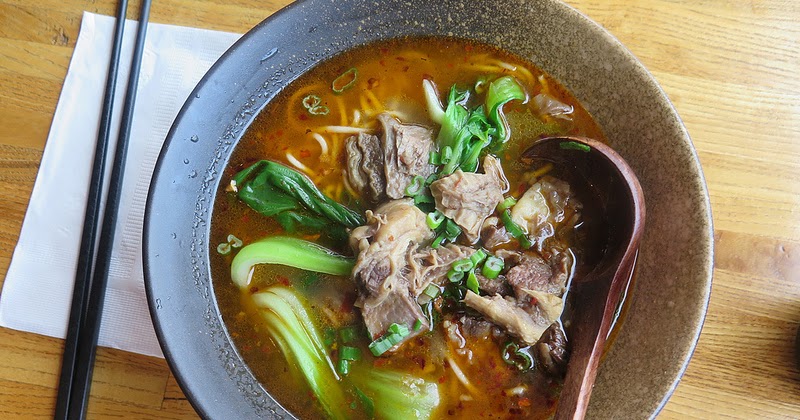 I jokingly chided the server at Gourmet Noodle House for failing to alert me to the spiciness of "N14 House Special Beef Flank Noodle S...

I returned to this place (it’s getting to be an obsession) to vet the ban mian (tossed noodles) with dried shrimp and scallions. I found this dish pretty but a little disappointing compared to my previous noodle selections.

However, I really enjoyed the Yellow Croaker Spring Rolls (S1 on the menu). These compact marvels feature a very thin, crackly wrapper stuffed full with shepherd’s purse-accented yellowfish filet and no “filler” such as bean sprouts or cabbage. They are well worth the seemingly pricey $7.95 for four smallish rolls (cut in two to make eight bites) and will definitely order them again. 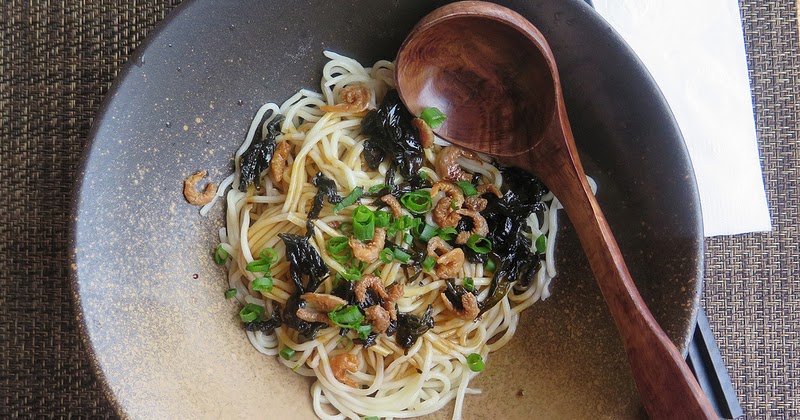 The vicinity of Geary Boulevard and 2nd Avenue has been very, very good to me, if not always to its restaurant tenants.  I've gotten at ... 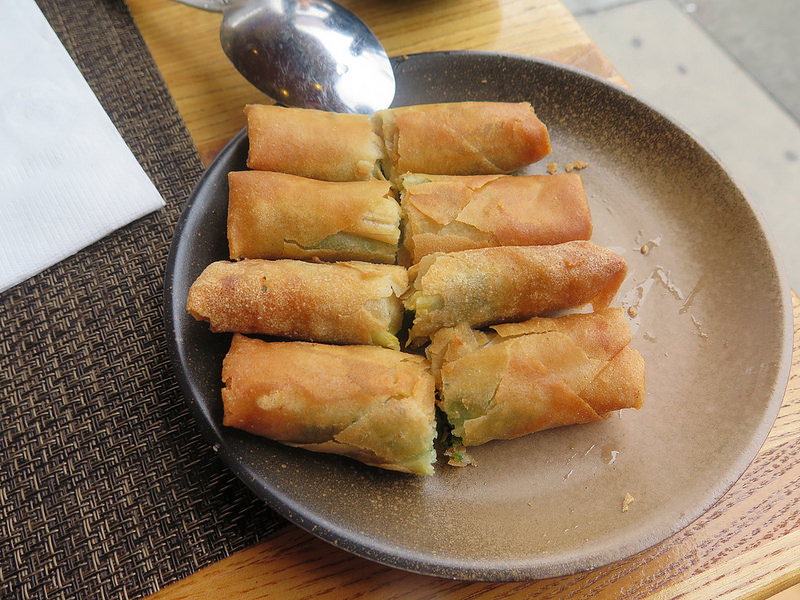 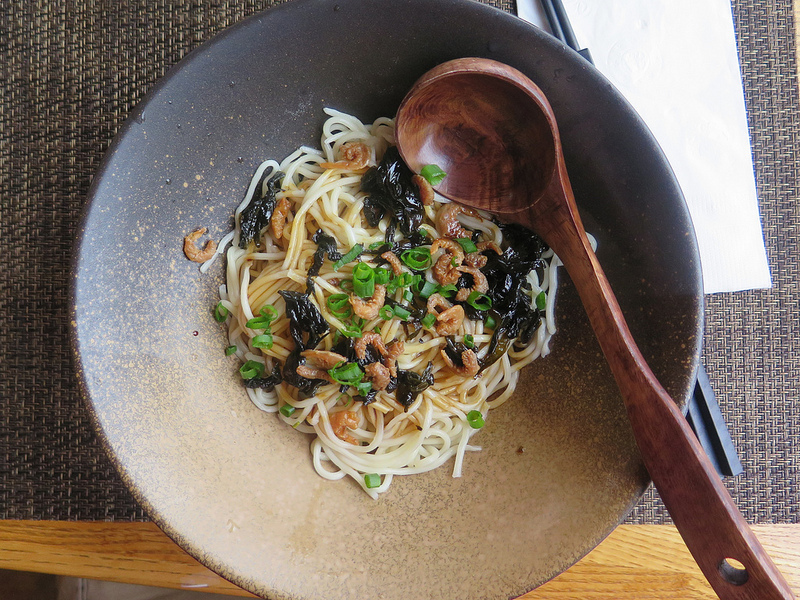 I’m not generally a huge fan of Shanghai food, although I do enjoy eating at Shanghai House on Balboa and at Bund. My first meal at Gourmet Noodle House was quite disappointing.

We had the Shanghai Style Smoked fish, which was served way too cold (straight from the refrigerator cold, although it was already 2.30 pm). They offered to warm it, but that didn’t sound good.

The A2 appetizer was also way too cold, and the flavor was bland and soggy, with the boiled peanuts adding an additional mushy consistency, which I didn’t find pleasant.

Shanghai stir fried noodles were decent enough, but nothing special (alrhough to be fair, this is a dish that I almost always regret ordering).

The one high point were the yellow croaker spring rolls, which were nice and fresh, and contained only the fish and some greens, although they might have been even better if the fish was minced rather than mashed.

I may go back to try more noodle dishes, but I’ll be walking, not running.

Your experience is more or less consistent with mine, and I happen to be a fan of Shanghai food (out of self-preservation, if nothing else). Other than the excellent yellowfish spring rolls (and I liked the chunkiness of the filling),the highlights for me so far have been two of the noodle soups. I’ve avoided some of the side dishes just based on the photos I’ve seen of them.

The smoked fish is best at room temperature, but the health code may be as much to blame as the establishment in this instance.

But after all, GNH identifies itself as a noodle house once in English and twice in Chinese on its sign, so that’s where our expectations should lie.

Had 3 noodles today. Listed in rough order of preference.

Had the House Special Beef Flank Noodle mild. I think they redid the menu numbering. Thumbs up. The flank could be cooked much longer though as the tendon was still chewy and tough. Loved the broth. Drank it all. The noodle was also of good texture. This dish is also available with Korean noodle. But the server recommended the classic noodle. 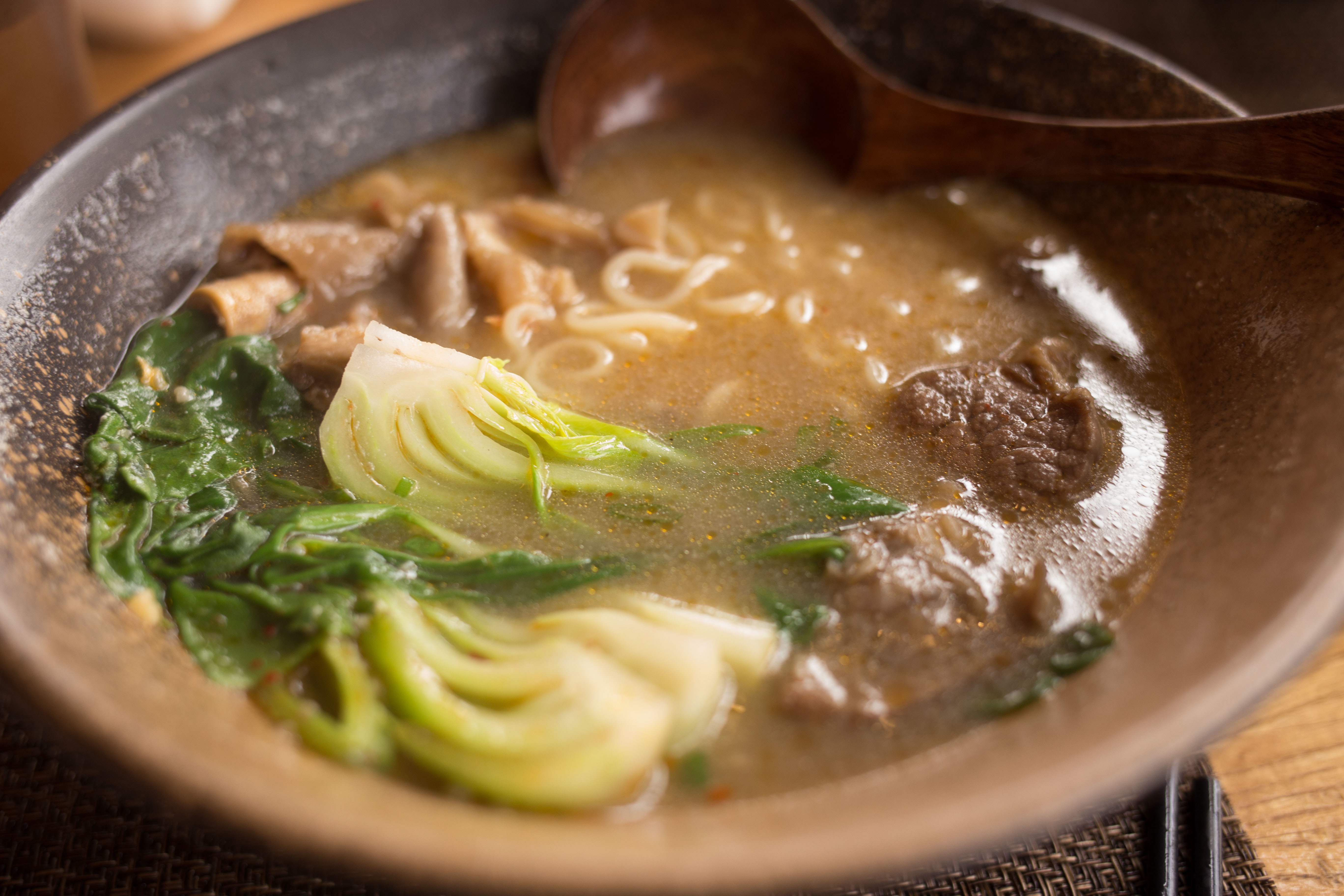 The tomato and clam noodle. The broth reminded me of the cantonese baked tomato pork chop dish. This noodle tasted homey and comfy. The clams were overshadowed by the tomatoes so its hard to pick up any clam flavors from the broth. 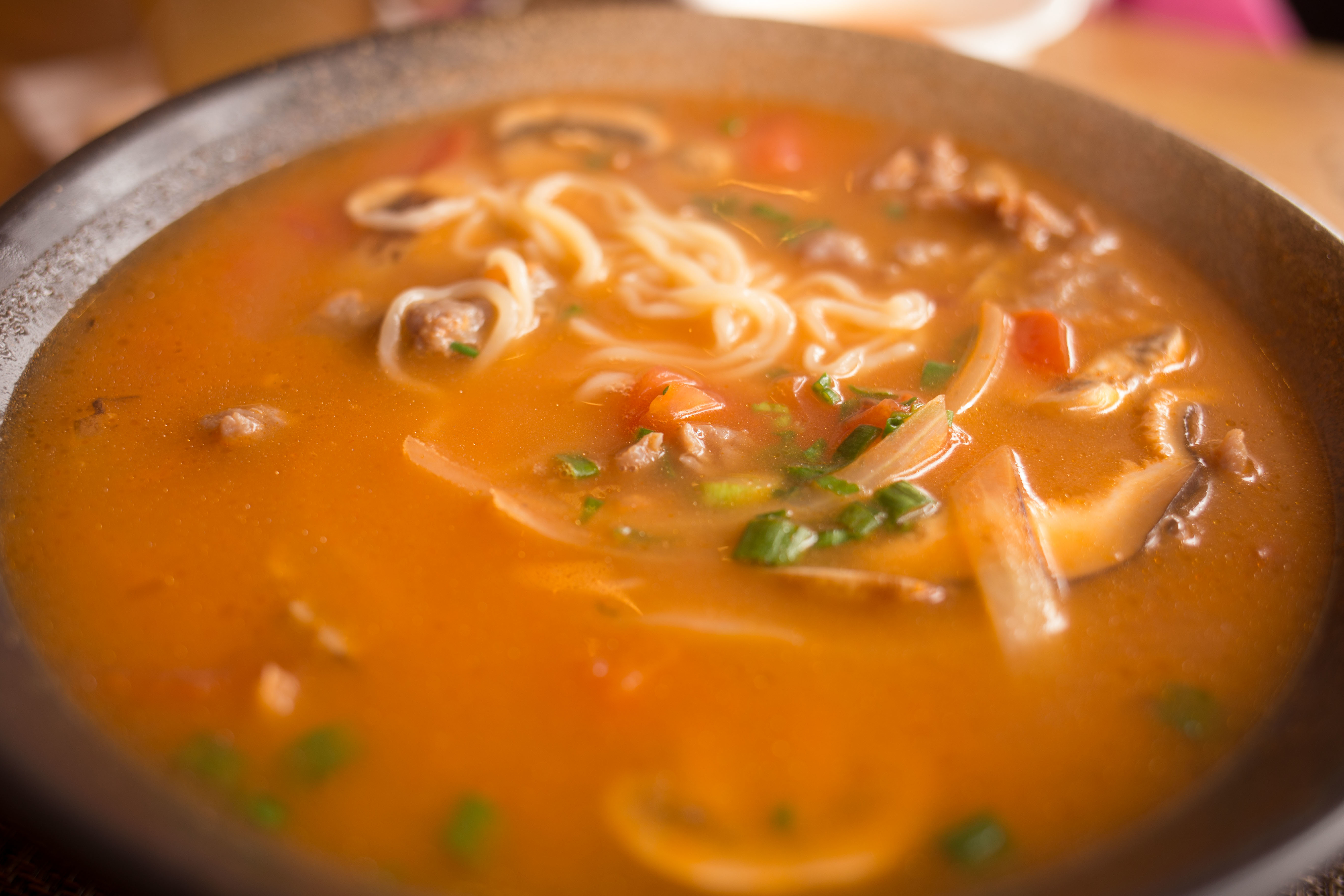 The pickled cabbage and pork soup. This one seemed to have similar components to the yellow croaker noodle soup except the fish was now the pork. 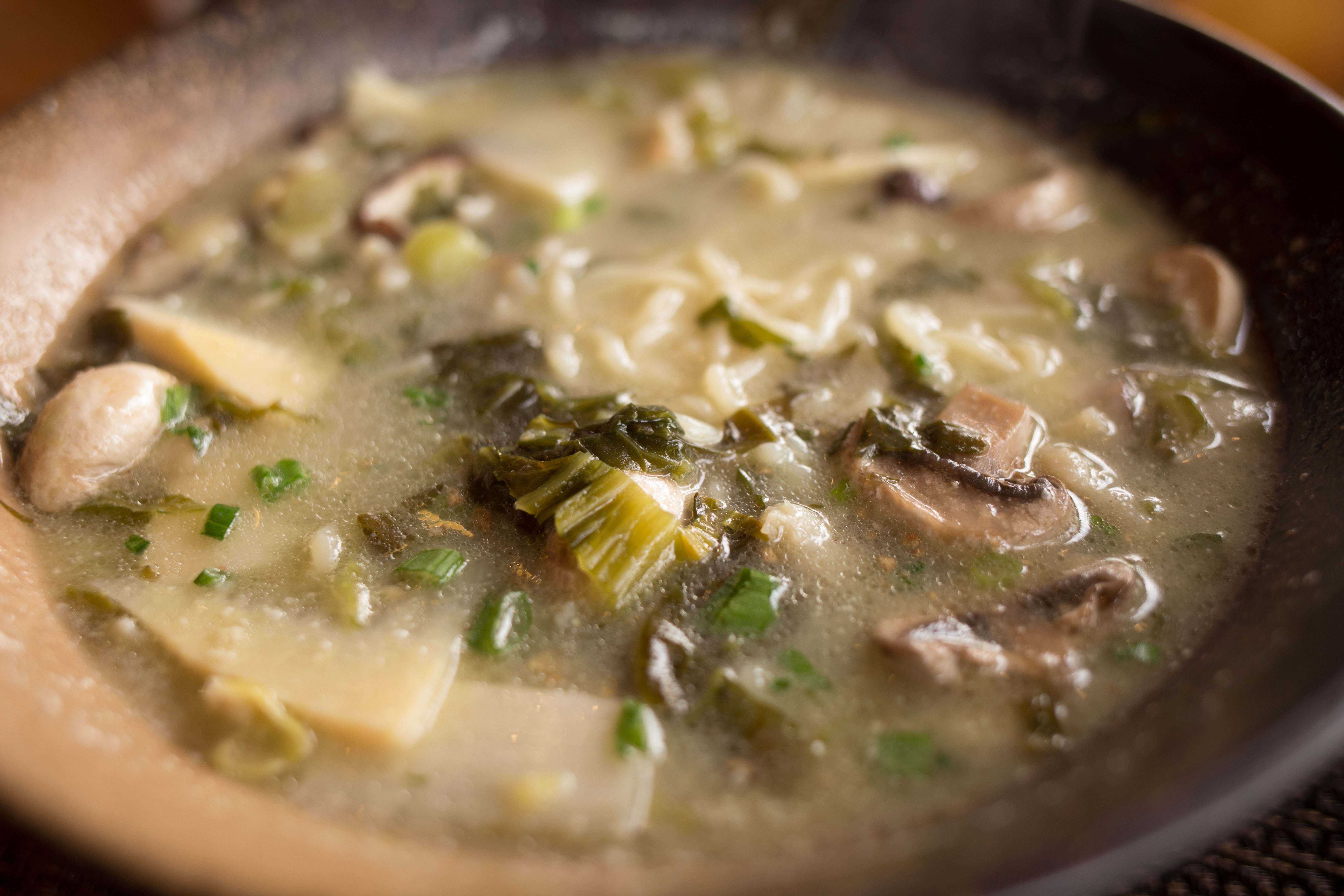 Comfortable noodles. I would love to go back and try the other noodles the server mentioned.

Today both servers were Cantonese. One of them mentioned that they were not related to the Gourmet Noodle House chain in China. The owner used to work there.