I am ready for my banishment from the site.

Not a processed cheese person here either. My kids did grow up on blue box Kraft Mac n Cheese or Annie’s, but it was always Tillamook medium cheddar they had at other times. Of course American process on the occasional burger out. But, after flying cross country last December, being really tired, and arriving a day before our hosts were able to be home, I found a partial package of Kraft Singles, and ate them all. Maybe three total, but I felt bad for wiping them out. The cheese singles aren’t exactly low cal, and not very filling, but tasted awesome. Also found the Tanqueray and finished that off too.

I just LOVE a grilled cheese made with Kraft singles.

I’ll see your Kraft singles and raise you Wonderbread.

In the early stages of the pandemic when there was the run on grocery stores we wound up with a couple loaves of white bread, which we haven’t had since my kids (22 & 24) were kids. lol I think it was Sara Lee white bread OMG it was the best, lightest, softest yummiest thing…I swear to God it was the best thing since sliced bread!

I’m also a fan of velveeta in mac and cheese. I love the gooeyness that it adds. I’l also add cheddar for flavor. And when I bake, it’s never too long, so that creamyness is there.

And for grilled cheese, it’s always white bread, with a little mustard, and velveeta. Plus Campbell’s tomato soup, with milk instead of water. Yum! 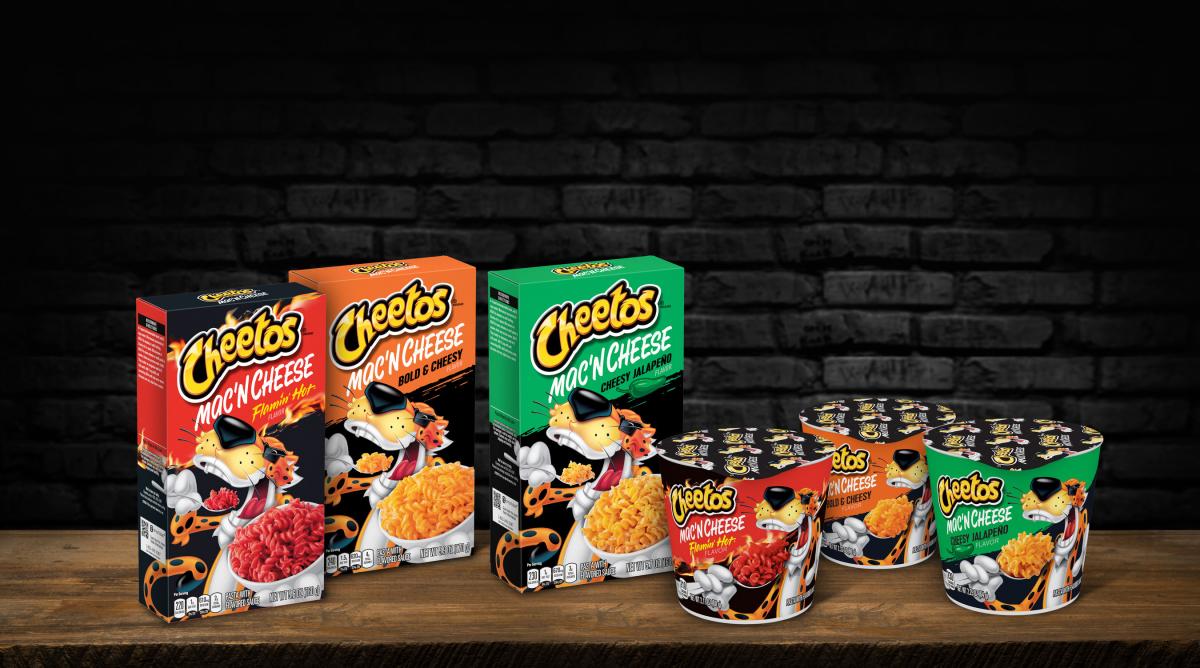 Cheetos Mac 'n Cheese will be available in three different flavors, each for less than a dollar.

Thanks! And now, a quandary: love Cheetos. hate Walmart.

It is dangerous to tell me* this right before I go to the Fine Fare. 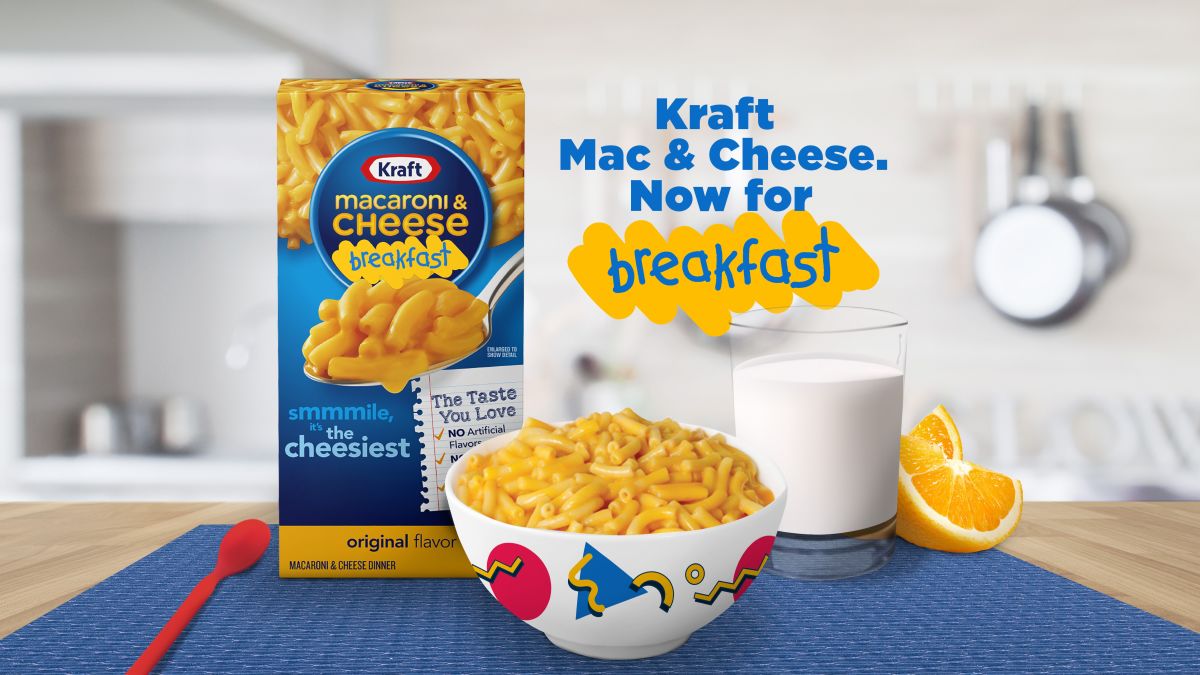 Kraft has just released the results of a survey it evidently conducted to determine how many parents have completely given up. Out of 1,000 parents surveyed, 56% allow their kids to eat mac and cheese for breakfast, which is 44% fewer than I was...

Confession @bbqboy - I had Mac n cheese for breakfast today, but leftover, homemade stuff. I’m copping to oral surgery on Tuesday. However, Kraft Mac n Cheese is probably a healthier option for kids than sugary breakfast cereal. Could be debatable though…

Well I am equally proud and ashamed at my accomplishment here. Without a doubt this is a “cheesey” recipe and one I’m not sure I would care to repeat, although the family did enjoy it.

Started with 2 cups of pre-ground Cheetos into a food processor to grind as fine as possible. Added the ground Cheetos to the already simmering pot of half a pint of cream. Upon mixing I decided it needed more cheestos flavor so added another cup of ground cheestos and the mixture really thickened, so added the rest of the cream and the chunks of velvetta (generic), added mixture to the bow tie pasta and hocus-pocus Cheetos mac n cheese!!!

I give it a solid meh… 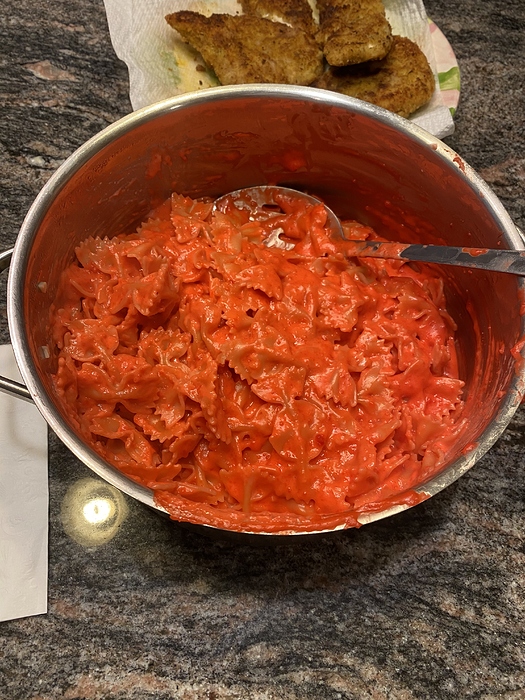 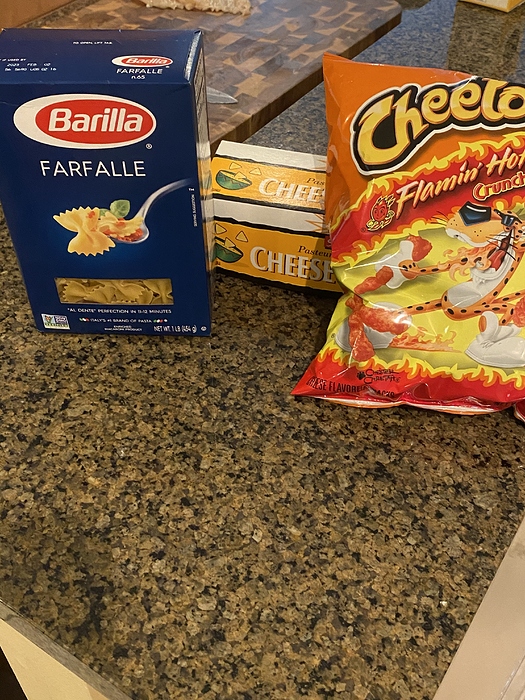 Well good on you for trying it out @NotJrvedivici! The color is a bit lurid - do you think that put you off a bit? I’m thinking it probably tasted better than you think it did, because you made it. Sometimes I get over critical about attempts at stuff…

Well full disclosure I never tasted the finished product. I’m a taste as I cook kinda guy and during the cooking process I decided I “had enough” (just didn’t think it was that great).

My daughter had her pre-school teacher write us a note saying that she didn’t like the lunch she brought to school every day, and that she wanted mac and cheese (and a bunch of other things). LOL

As is so often the case I’m late to the party. My invitation must have gotten lost in the mail.

When I had step-daughters I got quite upset at the notes that came home from school. Poor grammar, bad punctuation, and horrible spelling. The teacher’s response to my query was that she was “tired at the end of the day.” I was working ten hour days six days a week plus commutes at both ends. So I started grading the notes and sending them back with copies to the principal. When those were ignored I started sending copies to each of the school board members. I was invited to come speak to the board which got the attention of the PTA. There was even an initiative to get me on the ballot for school board, but I got divorced instead.

I won’t bore you with the details of the discussion with my step-daughters and ultimately the math teacher that spelling counts in math.

Sam - I hope you have better luck than I did with the American education system.

Mac & cheese was not part of my mother’s cooking rotation. At some time in my twenties someone fed me mac & cheese from the blue box which put me off for about twenty more years. My SIL introduced me to homemade mac & cheese. I’ve fiddled with her pretty classic recipe.

My base is cheddar cheese, shredded at home. As others have mentioned, ends and bits of cheese from the drawer are likely to find their way in. Those could be nearly anything. No Velveeta, no Kraft singles. Not ever in our cheese drawer. Sorry. My preferred pasta is cavatappi. Elbows are fine.

I saute onion in butter before adding flour to make an onion roux. I fold bacon into the Mornay with the cooked pasta. Confirmed baked mac & cheese guy with thinly sliced tomato on top of the mix before adding bread crumbs.

Since we’ve branched out to include grilled cheese… Real grilled cheese aficionados will insist that what I make is a melt and not a grilled cheese. I toast one side each of two pieces of bread. I usually use a dry skillet for that but have done it with a plumber’s propane torch on a dare. There may have been adult beverages involved. Those toasted sides end up inside the sandwich and help keep the bread from getting soggy. Grated cheese just like the mac & cheese, tomato, bacon (hmm - there seems to be a pattern). Assemble and cook, usually in a lubricated skillet but I have made them in panini presses, George Foreman grills, and waffle irons.

Story on myself. On a yacht delivery for lunch after we’d all been up all night dealing with a storm I made grilled cheese. I was exhausted, bruised, and had not cleaned the salt water droplets off my glasses. I cranked out eight or ten sandwiches for the four of us. For the last cooking step I mistook the golden-colored dish soap (some French brand we bought in Martinique) for vegetable oil. sigh Not just once, but every time. No one complained. I suspect no one noticed.

Cheddar, tomato, and bacon in quiche as well. No tomato in stuffed baked potato but definitely cheddar and bacon. Hmm. I may have to try sour cream on mac & cheese…

Has anyone thought about why ‘everyone’ is one word, and ‘no one’ is two words? That really tripped me up in eighth grade.

My invitation must have gotten lost in the mail.

For future reference what is the proper mailing address for a yacht in transit? Messenger pigeon?

but I got divorced instead.

A bit extreme to stay off the school board ballot, but hey if it worked out for you in the long run!!!

You cooked the bread / grilled cheese using soap instead of vegetable oil and nobody noticed? This sounds like it could be a new cooking competition. The judges substitute on ingredient for something completely different than the cook thinks, like soap for oil, then see who can pull it off!! You might be the next food network star! (I of course am your business manager)

Has anyone thought about why ‘everyone’ is one word, and ‘no one’ is two words? That really tripped me up in eighth grade.

I was thrown out of school in 8th grade so I’m fairly certain I missed this lesson, sorry.

What a great read this is. No idea how I missed it until now.

For future reference what is the proper mailing address for a yacht in transit? Messenger pigeon?

It moves around. Sometimes I have HF/SSB/Pactor and sometimes satellite. I have a fairly complex home email system with a whitelist that forwards to whichever boat I’m on. Send me your email address and I’ll add you to the whitelist so your traffic gets forwarded. Please no pictures of kittens or videos at all. grin Life is tough over the edge of the Internet.

…but hey if it worked out for you in the long run!!!

I did win the in long run. Quite literally third time was the charm.

You cooked the bread / grilled cheese using soap instead of vegetable oil and nobody noticed?

Exactly. It is amazing what fatigue does to people.

We discovered, in college, that if you pull an all-nighter and pour Michelob over Cheerios it tastes like pineapple. You have to stay up all night though.

I know this is not about cheese, but does anybody else include eggs in theirs? Thats the one I grew up with. Neither I or my kids had heard of the boxed version until visiting with friends.

I don’t like the saucy/bechamel version, nor do I like it so stiff you can cut it with clean edges.There was a great discussion on Chohound about this, and I ended up with a decent version that included elements of both.

Carbonara is basically mac and cheese with egg. I use about 3 eggs per 150g of spaghetti, and the sauce gets nice and thick.

I’ll buy that. But when I was searching for the Chowhound thread, which might capture what I’m talking about. 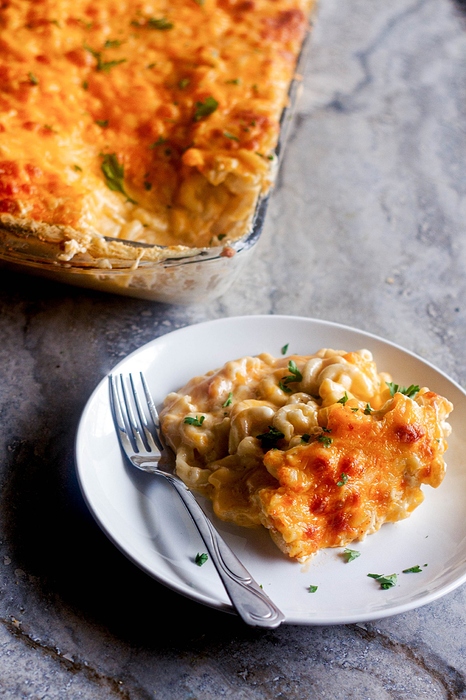 Southern baked macaroni and cheese is the ultimate comfort food. My recipe has five cheeses and stays true to the cultural classic.

I’m also going to look for the compromise version, which I think was from Alton Brown or NYT , and cooked in the oven, but stirred from time to time.