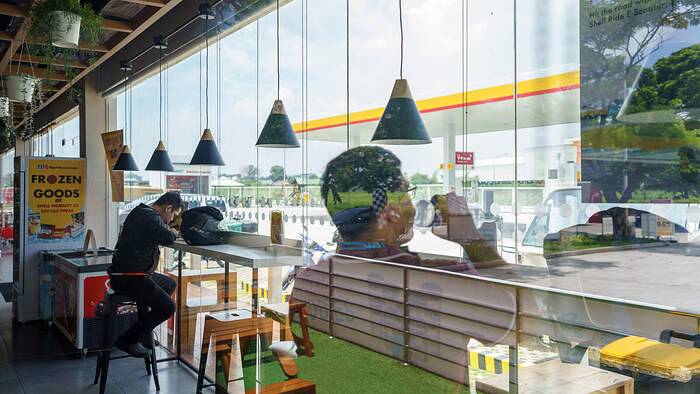 At these eateries, you can fill your gas tank and your belly, the latter with treats ranging from Texas-style barbecue to Czechoslovakian stuffed pastries.

I’ve been to Buc-cee’s multiple times, stopped at Hruska’s more than once and the Czech Stop in West (plus Weikel’s in Columbus, is it? I stopped at an Allsup’s in Temple, I think it was, for gas but didn’t know about the chimi (I was still working on some breakfast kolaches from Hempstead a couple of hours earlier). And I mentioned Stripes (Laredo Taqueria) in my report on my trip to Colorado a half dozen years ago).

Here in Houston I’ve been to Ekko’s Deli in the Galleria area, Greek food plus Sabrett hot dogs (I think that’s a Valero now, but still serving). And there are multiple gas stations with food trucks. I’ll have to think about anything really special.

Can you believe we’ve never been to a Buc’cees. For one thing, they don’t list the gas price on a sign outside. And we always thought of it as a tourist trap. A few weeks ago I had to meet my daughter to drop the grandkids off after a weekend visit. She suggested the Buc’cees a few towns over as a halfway point. There were cars coming and going. People walking all over the place. Cars backing in and out. OMG, it was like driving through a minefield. But the article states they have really good BBQ. So that must be part of the attraction.

I don’t recall the name, but if you drive a block or two into town, there is a place on the north side of the street that has superb kolaches and klobasniki without the Czech Stop crowds. You can sit at a table and enjoy the treats at your leisure. I love the honey bees at Weikel’s and the burgers at Hruska’s. Hruska’s sausage and sauerkraut klobasniki are TDF.

Technically not a gas station, but next door to Hruska’s is Peter’s, ok but really inexpensive barbecue and a wonderland of sides and desserts.

And we always thought of it as a tourist trap.

It’s not a tourist trap, it’s made by and for Texans. The biggest location has broken ground at the I-10 Luling exit. It will replace the existing store which was the first. I love the pulled pork sandwich. You can order food at a computer while you gas up and then run in to fetch it. You won’t find cleaner or larger restrooms anywhere in the world. It’s truly amazing.

I’m not absolutely sure of this but I think different locations may have different specialties. I’ve been to quite a few around the Houston area but haven’t really traveled/used them along the Interstates. Had an awesome crawfish ‘empanada’ at the one on TX 332 leading to Surfside Beach @ Freeport. I’ve looked for that everywhere since and haven’t seen it again.

There’s ‘localization’ of the non-food merchandise, too, like sports and sports fan gear and souvenirs, of course.

I had read about that problem. I went, I think, a lot farther in town, across a RR??, and the one on the north side of the street was supposed to be good, but it was closed by the time I got there. There was one on the south side, much closer to I-35, that I stopped at but finally decided I needed to check out the Czech Stop one time, too.

Burgers at Hruska’s were all I knew about when I stopped. Bought a couple of kolaches but had not heard of the klobasniki. Or the honey bees at Weikels. Dang.

Okay, now. I didn’t know about the pulled pork or ordering at the pump. Clearly, we are in the presence of someone with experience and know-how:

I stopped at the one just east of Baytown on I-10 a couple of years back, which, I think (?), was the biggest at the time. They’re caught in a vicious circle of having to out-do themselves, I guess.

Buc-cees started in my hometown (Lake Jackson) and last I was down there, the original one, on TX (or FM) 2004 was still in operation. It wasn’t much bigger than a 7-Eleven.

I remember traveling when I was a little kid, gas stations would have signs leading into towns about their clean bathrooms! One was Grimes Garage, in either Columbus or La Grange, which must have had hundreds of signs about ‘cleanest bathrooms in Texas.’ We always stopped for their huge cooler with an unbelievable selection of soft drinks. Dad would let my Bro and I get 2 apiece. They were 7 oz back then. Didn’t take much to keep us appeased in the back seat back in the 40s and 50s

I ventured into the bathroom, once. It was huge, probably at least 20 urinals along the wall plus stalls and sinks. And yes, spotless. Also, nobody there! There were never lines at the pumps (only 4, I think); they were never busy!

“Okay, now. I didn’t know about the pulled pork or ordering at the pump. Clearly, we are in the presence of someone with experience and know-how: “

That was pretty funny.

But informative. Maybe one of these days.