They used to be mandatory valet parking. I assume they rented gas station parking across the street and use to hustle the cars back and forth. Given the blind right turn off of Tinton Ave you couldn’t blame them for the mandatory valet, someone could easily get hit crossing from the gas station to the restaurant.

Gargiulo’s is going to have valet parking.

Where did you hear this? Just curious, I know last week they were re-sanding and painting their chairs white! lol

Gargiulo’s said today they are aiming to open in a couple of weeks. No guarantees that they’ll make it.

There has been an uptick in activity there this past week. Parking lot full of cars, not work trucks (training?) and even at 8am this morning there were a lot of cars outside. I had heard there was a work stoppage by the town, guess that has been lifted! I can’t wait!

This has been one of my most anticipated restaurants in a long time. Mostly because of the extremely close proximity to home, but also because who the heck doesn’t love excellent Italian food. Last night was opening night and I was able to secure an 8pm reservation. Since it was opening night I went in full well knowing there were going to be some opening night “jitters” so I’m going to forgive a lot of the service “errors” etc., however I will describe a few (of the many).

One of the reasons I was so excited was because of the online information about their Brooklyn location such as:
Tuxedo-clad waiters serve old-school Italian fare at this circa-1907 banquet hall-style eatery.

In the 90’s Oldsmobile ran an advertising campaign for their cars that said:
This isn’t your fathers Oldsmobile…well…This isn’t Brooklyn’s Gargiulo’s.

I was expecting Nicholas style service & ambiance with Jimmy’s quality red sauce and Italian favorites, what I received was well, continue reading…

Arrived at 8pm for our reservation and the first warning is DO NOT approach the restaurant from Water St. vs. Sycamore (going east vs. west) the Valet is NOT set up for cars approaching from Water St. and honestly it was a cluster f*ck trying to valet park, which is their only parking option. (@paryzer)

I was rather disappointed that while they did completely update the interior the floor plan remains the same with the very cramped bar area as soon as you walk in. We were greeted and told our table would be ready shortly and about 10 mins later it was. The dining room while completely refinished aesthetically it is relatively the same. I do believe they removed some tables as it’s not as cramped feeling as Portofino’s was, however with the low ceiling noise is a bit of an issue, not overwhelming but it is noticeable.

Greeted by a server, no specials on opening night, given bread (meh…for a Brooklyn place I was hoping for exceptional bread it was fine but nothing truly special) only drink order given was an unsweetened iced tea which after 5 minutes I was told they do not have. (No offense but if you have hot tea, which they do…then you also have unsweetened iced tea)

After a slight but understandable delay in getting the apps, the artichoke came out first. This was my daughters pick and while I didn’t pay attention to it on the menu she ordered the garlic and parsley artichoke, which she thought was stuffed and finished with garlic and parsley vs. a broth as commonly prepared. Interestingly enough and I’ve never seen this, it was NOT stuffed but just prepared with garlic, oil and parsley. Not their fault, and not really that enjoyable just sucking on artichoke leaves. lol Hey if you enjoy it go for it, but I prefer mine stuffed!

After about 10 mins gnawing on the artichoke leaves the waiter comes to the table to explain:
“I ordered your pasta fagiole, but they said it can’t be served as a side so I have to bring it out before your entree’” . I said that was fine, I wanted it as a soup / app so please bring it out.
(beyond opening day “jitters” I think a waiter in an Italian restaurant should know pasta fagiole is a soup, not a side)

Soup was served and it was delicious, one of the better versions I’ve had in a long time. Only problem is the “bowl” was rather skimpy, nothing overly gratuitous about the serving size. I also had to wait about 5 mins to flag someone down for cheese and pepper. The cheese, again from Brooklyn, it was good, but not great. Also just served in a small ramekin, no big heaving block of cheese freshly grated at the table. I don’t think they filled the pepper grinder because after about 10-12 grinds I barely had any pepper and just told the kid to give up. The option of red pepper flakes would have been nice but I didn’t want to bust the kids chops at this point so I just used table black pepper)

During a somewhat lengthy wait, we noticed the table next to us had a bit of an issue. Apparently their server lost their order…literally lost it and never put it in the system. So they were there before us but as our entree’s were coming, theirs were never put in and the waiter had to re-take their order. They were rather annoyed and understandably so.

Our entree’s arrived piping hot and looking good. Although they looked good, expectations vs. reality = my daughters dish was more a generous side dish portion than an a full entree. She’s not a big eater and she finished it all and several pieces of bread in the broth afterward. She said it was very good, but she never finishes a meal and she cleaned her plate. (at $23. it’s not an excessive price but it’s pasta dammit, you can tell by the pic, the full sized dinner plate is under her dish, her plate is truly a side dish sized plate)

My veal parm while good, wasn’t exceptional. I don’t like my parm over sauced, but one ladle didn’t really provide enough for each bite. They seem to use a panko breadcrumb which isn’t the norm for an Italian fried dish, but it was good although the non-exposed pieces of breaded veal were very soggy and not crisp at all. I also don’t know if the side of veggies vs. pasta is the norm or a mix up because of the pasta fagiole mix up, I wasn’t going to ask.

Wife’s sole francese was very good and a nice serving size (3 pieces). However if it comes with mixed veggies as a side, and we ordered a side of brocolli rabe’ as an up-charge, why place the mixed veggies separate and place the rabe’ directly on her plate. The lemon of the francese overwelmed the taste of the rabe’ only adding to the already bitterness of the vegetable, not giving you a fair taste of the peroration without the sauce from the plate mixing in.

It was late and although we finished our meals we were still hungry. The veal parm was one “decent” size piece (It looks larger in the pic than I remember) but hardly enough to be called a hearty meal. So we ordered desert.

Tortoni (from Bindi?) and a cannoli which was excellent sans chocolate chips in the cream.

All in all a mixed bag, I will certainly return for the convenience factor alone, not because the food would food is calling me back, but it’s only one experience and I do encourage all of you to give it a try and report back.

Honestly if you were a big San Remo of Red Bank fan, thus far I put this on par with that. Hopefully with some time a few of the wrinkles will get ironed out and they will find their stride. Right now it’s a new spot serving decent food and I certainly do wish them all the best.

To use @gcaggiano ranking I would give it 3 of 5 while grading on a curve for first day jitters. 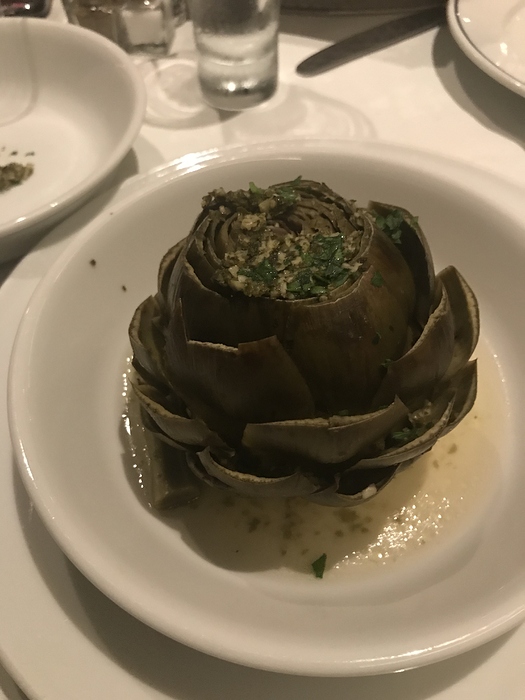 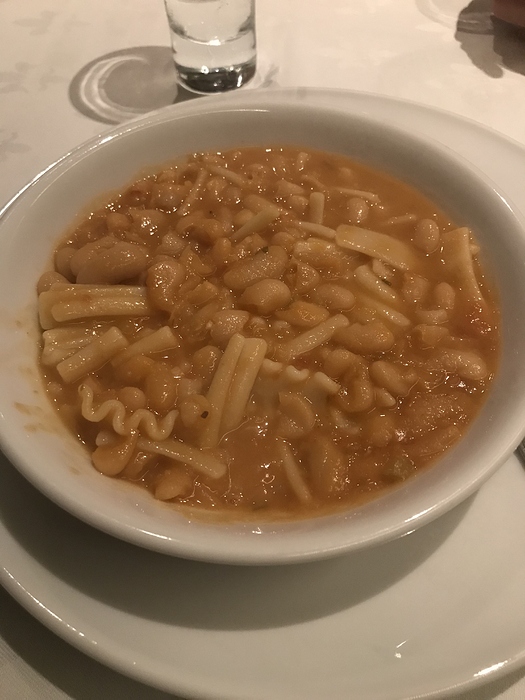 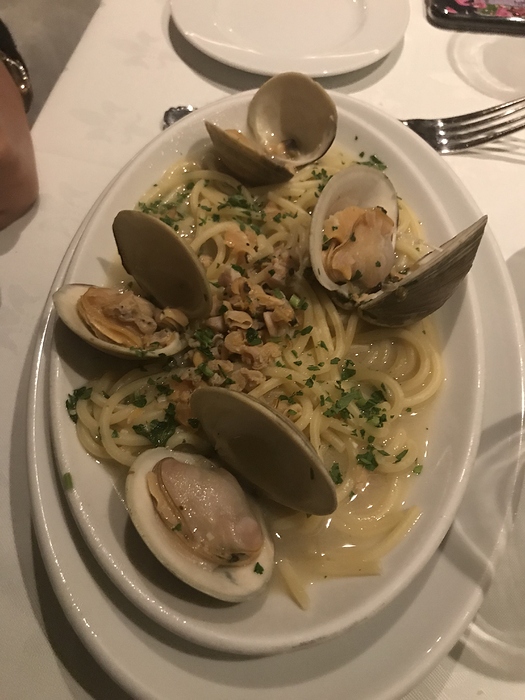 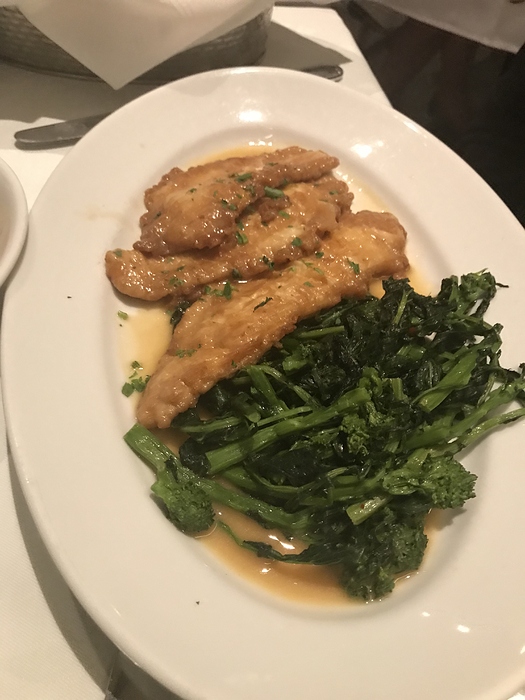 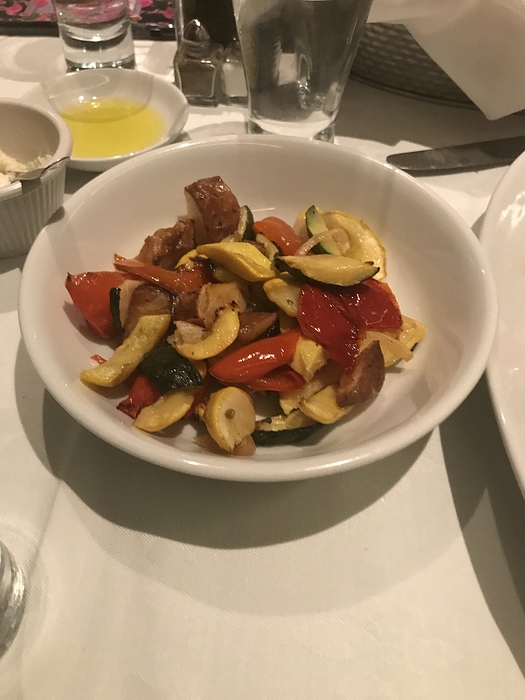 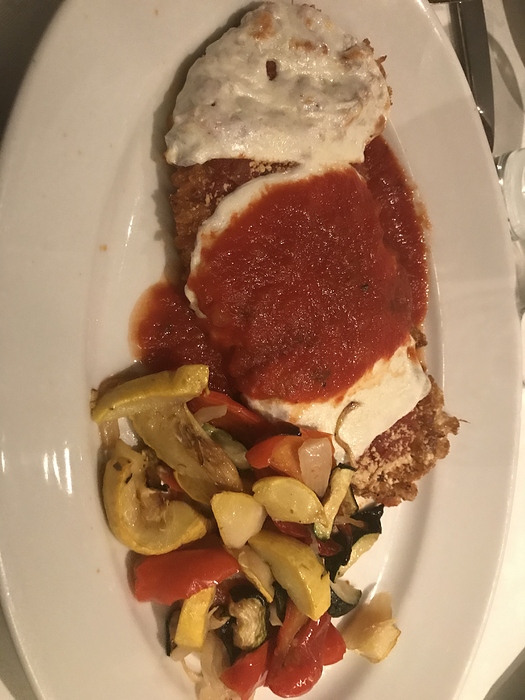 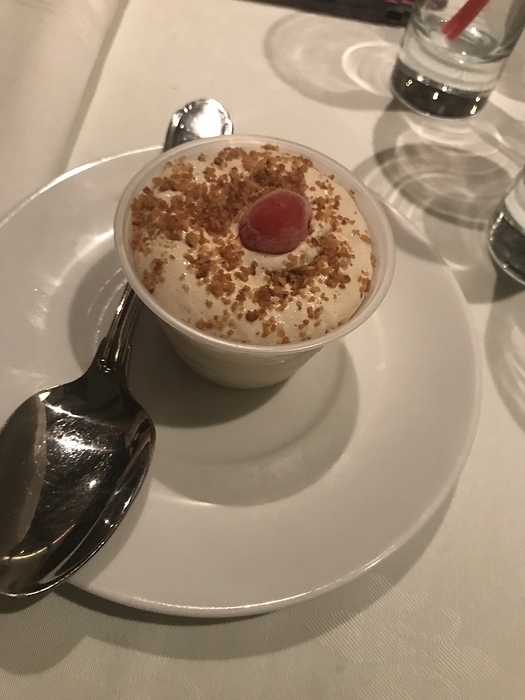 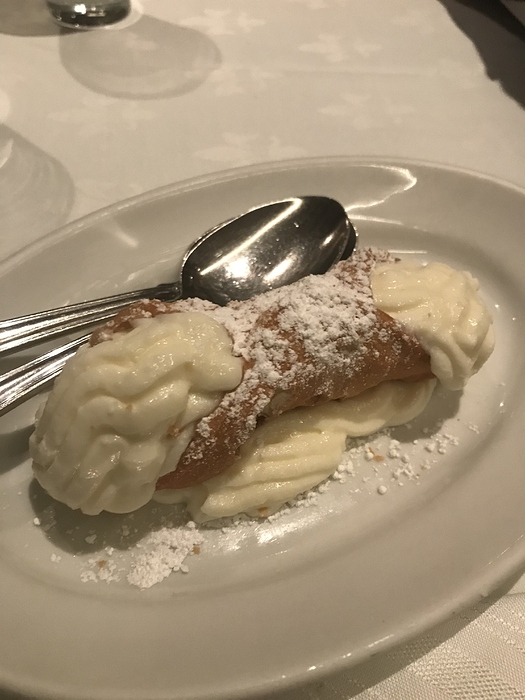 Where the waiters tuxedo clad?
Did the waiter offer the number cubes to use as an option to pay for your meal?
Old time Garguilo fans should remember this.
Do they have a liquor license?
Your experience doesn’t seem like I am hurrying there any time soon as my go to Italian place is Solo Trattoria in Freehold

I’ve never been to the one in Brooklyn but my wife has many times and it sounds like it’s not the same quality, at least so far. I’ll probably stick to Jimmy’s until they get their act together which I hope they do. I was really looking forward to this place.

I hope @BossaNova and others are right and that this turns into something, ** but right now it just sounds to me like every other mediocre NJ Italian place–which is why I so rarely go out for Italian food.

No, not tuxedo clad at all. Grey dress shirts, not ties and jeans/slacks.
Number cubes? No, I have no idea what you are talking about the only options to pay were:
1.) Cash
2.) Credit Cards
3.) Washing dishes
4.) Cement shoes and a trip over the Tinton Falls the hard way

Yes they have a liquor license but a rather small bar, maybe a dozen seats.
My intention isn’t to discourage anyone, I just had very high expectations and unfortunately my experience didn’t live up to them, but that’s on me. I will be back to try other dishes.

Where is Solo Trattoria?

@BossaNova - again, I don’t want to discourage anyone but knowing you are a Jimmy’s fan like I am I’m not sure how this will size up for you.

@CurlzNJ “mediocre” might be a bit harsh - I would say it was good but not up to par with my all time favorites and I was expecting a much more formal environment. I never changed from work so I was in a suit and tie, the only person dressed as such. Table next to me was a guy in shorts and tee shirt, certainly not what I was expecting based on what I read about Brooklyn.

Hot Off the Tinton Falls Facebook page:
(I don’t think it was pricey as so much small portions) 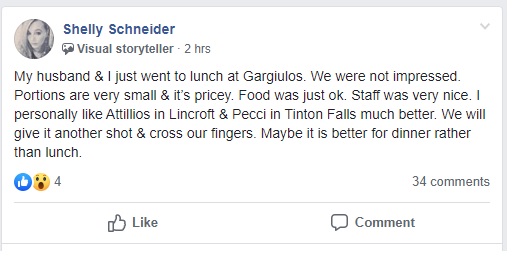 The payment cube in Brooklyn was where you pulled a number from a velvet bag and whatever the number was that’s the price of your meal
Solo Trattoria is on South Street in Freehold open about 20 years
Shorts & T shirt would never be allowed in to the restaurant.
Sounds like they are trading on their Brooklyn reputation, as for me until they are open at least a year doesn’t seem like I am missing anything
Thanks for your help.

I’m getting bummed out. All these new places I want to try seem to be mediocre…il nido, gabriellas, gargiulos, nettis.

Higo better come through. That is high on my radar.

Il Nido Is the only one that’s really calling me…

I don’t know how much faith I would put into that post…Pecci in TF aka Taste of Italy? Is she really comparing this place to a deli/caterer?

Honestly I had no idea what “Pecci” in TF was, so if you are correct I would agree that’s not truly a fair comparison. However her sentiment, small portions and food being “ok” does pretty much coincide with my experience so I don’t have question to doubt her experience since it seems to closely resemble mine. (all my service issues aside)