This is so interesting! I’m not posting a link to the article because the paper is subscription only, but you can see the good news in the screen shot! I have high hopes for Katie’s new restaurant venture. I notice Katie’s is also supplying Chris Shepherd’s One Fifth Gulf Coast year long restaurant project. It’s almost oyster season, my favorite season. @jcostiones, if you get here first, be sure and let us know how it is. 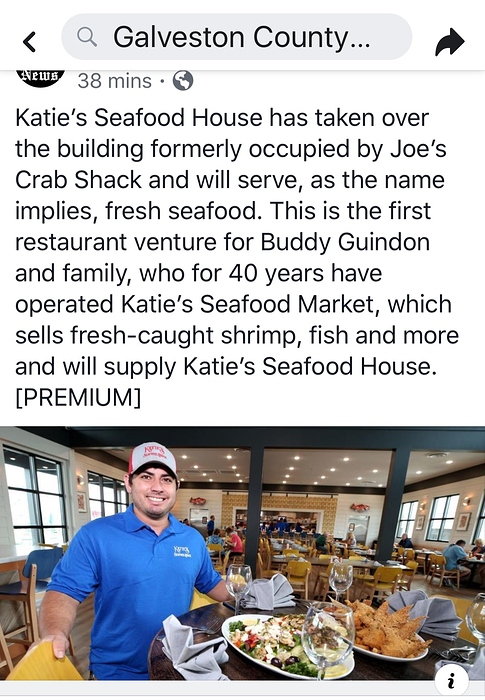 On a sad note, both locations of Olympia Grill have apparently closed for good. I really liked the harborside setting on 21st Street Pier.

Sadder still is the news that Clary’s will not continue following the death of Clary Milburn a few years ago. The building it was in on Teichman Road was always in a precarious position over the water and suffered repeated damage from storms over the years. Jack Nicholson and Shirley MacLain shot a scene here for the movie Terms of Endearment. I’m personally acquainted with some of the Milburn family in Galveston and they are fine people. 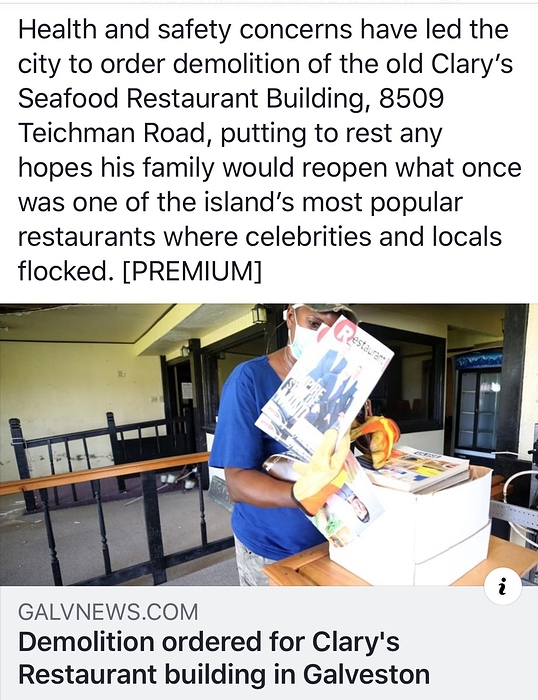 Speaking of floods, I hope all of our faithful HO remnant are safe and dry following last week’s edition of “Houston Floods.”

Oh yes I forgot about him. We’re i-friends as well, with several mutual friends. His wife is joint venturer and they have some unique items. Definitely a must try.

Noooo!! Say it ain’t so, Joe’s Crab Shack is closing! I guess all those tourists with Midwest license plates have been fooled before by this place before and didn’t go all the way to Galveston to get ripped off, let alone the locals.

We loved Clary’s, a very nice place with good food and Mr. Clary was always there.

Tropical Depression Imelda Marcos dumped enough rain that flowed into Galveston Bay to set back the oyster season at least a month, just my professional opinion.

Katie’s apparently just opened, just a facebook page is all I can find. We’ll be down there in a month and will try it.

I’m confused by this location after looking at the Yelp page for Katie’s (the soft opening is this week and Grand Opening Oct 14). I’ve been to a Joe’s Crabshack on the seawall, it was a bad as expected. But this is on the harborside by the Tallship Elissa. I don’t recall a Joe’s on that side. ANYWAY, it looks good so far, I’m intrigued by the “snapper wing” dish people are talking about. I’m thinking BONES. 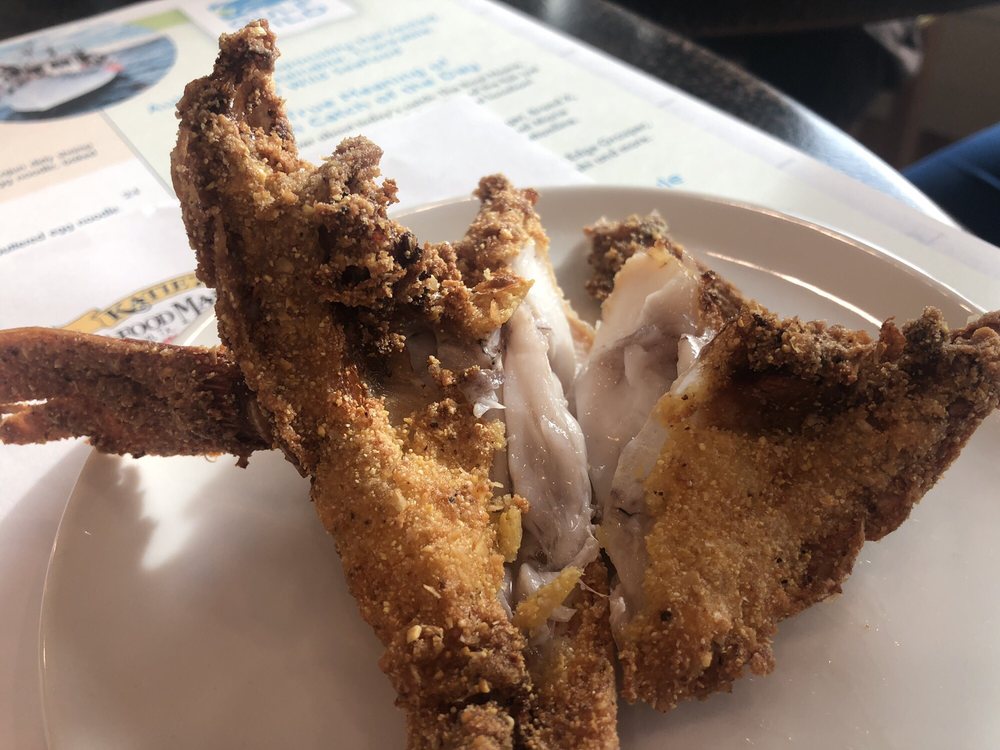 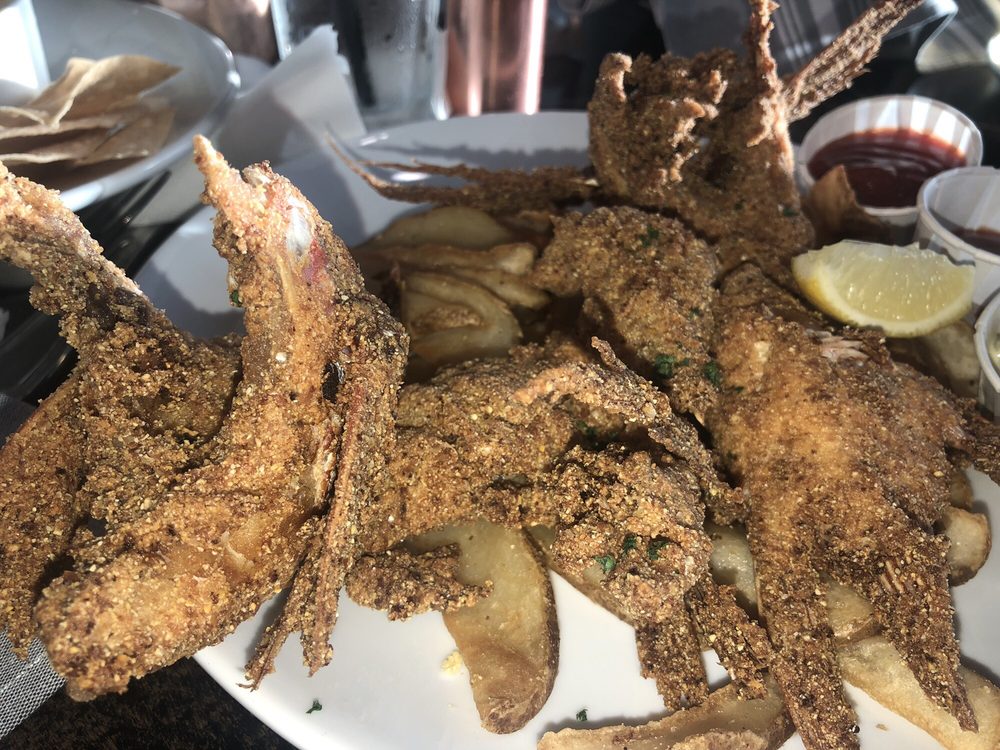 I have to agree that Joe’s Crab Shack would be no great loss. Just a few fried shrimp or oysters atop a mountain of French fries. Although, I will say that when all the servers dropped whatever they were doing to perform the Macarena was fun.

But about the oysters. Because of the rainfall do you mean they will be unavailable all together or just not briney/tasty enough? Inquiring minds would like to know. We might be heading that way in the next few weeks and are very oyster oriented.

But about the oysters

Oysters are available year round in Galveston from private leases in the bay but the half shell ones are generally after the 1st of November when the season opens but it won’t surprise me if the opening isn’t delayed for most if not all of the public leases.

I assume you’re coming through Houston and Captain Benny’s will have half shell oysters from Matagorda or San Antonio Bay if Galveston ones are unavailable. Jump on the Matagorda ones if you find them, just call and ask the restaurant about location, sacks are label by law.

the soft opening is this week

There’s this from the Chronicle. 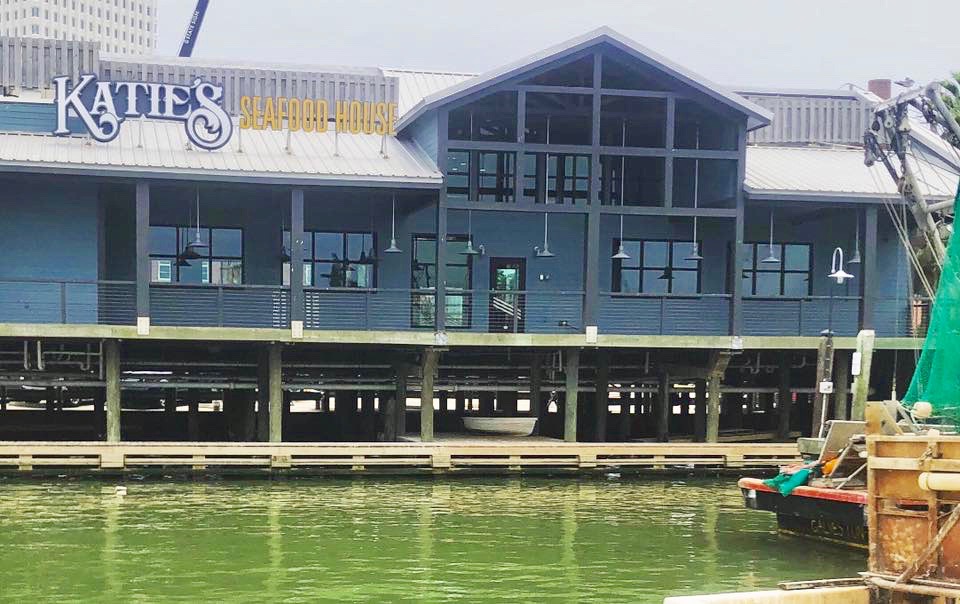 “Brett Otteman of Landry’s Inc. is now the general manager at this seafood outpost, 2000 Wharf Road, which should formally open to the public on Oct. 4.”

I’m hoping he has left Landry’s to take this job and Landry’s is not a partner. Tilman’s cost-cutting profit-enhancing focus so well portrayed in the TV show Billion Dollar Buyer often means sub-par food.

and Landry’s is not a partner

And it was announced today that he has bought Del Frisco, lock stock and barrel.

he has bought Del Frisco, lock stock and barrel

I saw that and wonder what is next in his crosshairs.

Half shell info is what I was looking for, but the general oyster information was helpful too. Thank you!

We were in Galveston last weekend and had trouble finding any oysters let alone half shell. Everybody says November 1st is the opening of the season.

We were in Galveston two weeks ago. To make a long story short it was rainy and uneventful food wise or I would have given a review. But I feel like I owe you of all people this. Decided to give Bennos one last chance. Everything was hot, fresh and absolutely delicious. Blackened oysters, fried shrimp & seafood platter. Service was friendly. Really good.

We were in Galveston two weeks ago.

Thanks for replying. I’m happy everything was good at Benno’s. I’ll be doing a Galveston/Kemah, not boardwalk review manana.

Sad to say, Buck’s has already closed their doors.

Buck’s has already closed their doors.

I had it on my radar to visit, but didn’t make it to Galvy in time. Sad really. I know that the locals harbored resentment for his taking over Farley Girls and changing the menu gradually, which makes no sense to the rational world, but Galvy has its own standards to adhere to. In that same vein, they are exceedingly loyal to their longtime establishments Leon’s and another place near the Lakeview Cementary that I can’t remember the name of. I had Leon’s once and thought it was not great to be charitable.

Thus they were left with tourists, and, well, it’s January at the beach too.

I feel sure they’ll pop back up soon in a successful adventure, but stay off the Island, is my advice. I know it was an incredibly hard decision. I also have some mutual friends of theirs.