Fun or interesting food related stories. Here's one about me and Pope Francis.

While in general I’ve come to despise social media like Facebook, every once in a while it still serves a purpose. Today I was reminded of a food related story which I shared on Facebook in 2014, here is when I bought Pope Francis beef jerky. (true story - I have edited full names from original story)

A friend of mine from high school, Robert XXXXXXX , received the calling and decided to dedicate his life in service of God as a Catholic Priest. I discovered this on Facebook approximately 5 years ago. At this time he was serving the poorest of the poor in the world, living in villages in 3rd world countries, both practicing and spreading the word of God to the world’s most impoverished people.

In 2011 he was given a chance to come home to New Jersey to visit family and friends, he was generous enough to share some of his time with me to discuss his calling and his new life. (See picture #1)

A few months ago I was pleased to read an update on Facebook that he received a transfer to Rome Italy and was living in modern accommodations. In his status update he was stating how happy he was to be living with modern conveniences, which he had done with out for several years prior. He also lamented that although he had these conveniences again, some of his longings from home were not available in Italy (perhaps in all of Europe I don’t know). Those longings were for beef jerky and Snyders hard pretzels. I read this and contacted him asking him for his address and I would ship out some beef jerky to him, however I had one contingency;

“If you are in Rome now and I send you beef jerky, I fully expect you to get some into Big Franks hands. (Big Frank is Jersey-speak for Pope Francis). I want you to give Big Frank some beef jerky, when he becomes addicted I want to be his “supplier” and I want to get in tight with Big Frank. This will include some one on one time with him and a ride in the Pope-Mobile”.

I shipped the beef jerky and it was received by my friend about 2 weeks later. (see picture #2). Mission accomplished………so I thought.

Yesterday I received the following message from Brother Bob;

“Robert XXXXXX PM: NotJr.–Two weeks ago, I gave the head of the Papal household a bag of beef Jerky with your name and address on it. yesterday I asked if he gave it to the Pope, and he said yes. Had I known at the time that I would have an opportunity to give it to the Pope myself, I would have waited. But your plan of getting the Pope addicted to Beef Jerky has been set in motion!”

For those that don’t know the Head of the Papal Household is the equivalent to the Pope’s Butler, he run’s the Pope’s personal residence, including his kitchen. The Pope has LITERALLY received Beef Jerky I have sent him!!!

The reason Brother Robert says; “Had I known at the time I would have the opportunity to give it to the Pope myself”, is because Brother Robert was chosen to serve Easter Sunday Mass with Big Frank!!! (see picture #3 & 4).

That my friends is how I bought the Pope beef jerky. I will let you know if I get a thank you note from Big Frank. I kid you not this is all 100% accurate. (Even I’m not crazy enough to make a story up regarding the Pope!!!)

So what interesting food stories do you have? 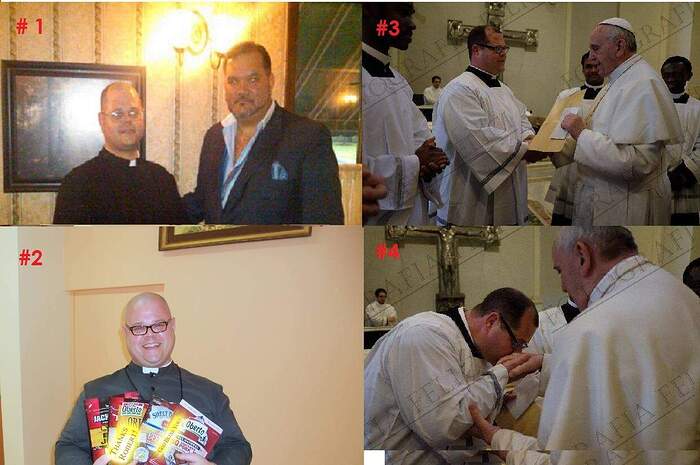 I once sold Max Weinberg a Double R burger. So, kinda the same thing, right? (I’ll try to think of something more interesting than just being in the same restaurant with a famous person.)

Wasn’t that Roy Rogers burger? If so where was the location?

Monmouth Mall, right next to A&S. And close to Sebastian’s Pub, where my friend Elaine worked. She was on her break, hanging out with me at my register, and demanded that Max give Bruce Springsteen her phone number. She was (is, actually, we’re still friends) a piece of work.

That’s a great story! Love it!! So you have to speak Monmouth Mall location lingo post 1994 since I moved to the area. Neither A&as nor Sabatian’s were there since I can remember.

I think A&S became Macys. Or maybe it was Bambergers that became Macy’s. Sebastian’s Pub was a mini-chain, and the name pretty much tells you what you need to know about it. It had some videogames, so I used to go over there on MY break, to hang out with Elaine and play them. She had memorized the pattern of the Pacman ghosts and could get to the ninth key level. I was an ace at Frogger, myself.