Recently my other half’s mother passed away. His father doesn’t cook and I mentioned to him about having frozen meals delivered to his father and just reheating in the microwave. What companies do this for good quality meals? Thank you.

In my part of the world, this company seems to have a good reputation, although I’ve no personal experience of them:

Several years back, I had food delivered to my MIL for a while after my FIL died. I got her the low carb versions, but they offer a variety of meal types. She liked them all. They, along with food I cooked and brought her, helped keep her in her own home for more years than she might’ve been able to, given her cognitive problems.
http://www.homebistro.dinewise.com/

He is in Meriden, CT

This sounds like it would be really helpful. However, will someone be checking to be sure he actually eats the meals in question? Seniors can be really sneaky, i.e., lie like rugs, when they think it will avoid bigger issues.

What some seniors do is eat half a meal and save the other half for another meal. This almost definitely means they are not getting enough nutrition. This is particularly a problem if they are getting only one meal a day delivered. Or they don’t eat it at all, because they don’t like (for example) meatloaf and that day’s meal is meatloaf.

My father used to get Meals on Wheels a few days a week (because he didn’t like all the meals). And then he’d eat half for lunch and half for dinner. Now admittedly he was a small person and probably needed slightly less food, but he still was not eating enough and was tired a lot of the time. When he moved in with my brother and sister-in-law and someone was paying attention, he gained back the weight and had more energy.

Similar experiences with elder care. Is it unaffordable or would he balk to have someone arrive with a meal sure to please, or cook one, and keep him company while he eats? A lot of people find it unappetizing to eat alone.

Also consider a substantial nutritious lunch and then a vitamin-packed soup for dinner. Simply heating a soup for dinner might be easier than getting good results with a frozen dinner and a microwave.

It might be the case that the only way to guarantee enough nutrients is to include dietary supplements like Ensure. Also, doctors should have the last word, but it seems to me if one is 96, one should just go ahead and eat all one’s favorite foods if it encourages eating. My MIL might have lived beyond 89 had she eaten salad for lunch instead of cheesecake, but hey – it’s protein, it made her happy.

but it seems to me if one is 96, one should just go ahead and eat all one’s favorite foods if it encourages eating.

I agree to a certain extend.

If you give the elder this choice though, he/she might end up eating only sugary food. I see at times my very health conscious dad craved for MSG because food is a bit tasteless with his aged taste buds.

If the senior is still capable of making their own decisions, and understands the risks, I’m ready to let it be their choice. Heck, at 96, if somebody wanted to smoke, I’d say “Up to them!”

I’d like to make it till I’m at least 96. Not really fussed how much extra time after that but I’d like to go with cigarette in one hand, a glass of Calvados in the other, murdered by a jealous husband.

I pretty much let my cat eat whatever he wants now (with my vet’s approval). He’s almost 20 (will be 20 in March if he lives through the winter) so he is in the same territory.

Meal delivery is very local. I know an excellent meals on wheels, Santropol Roulant, but they stop just south of my neighbourhood (the other side of a railway line).

If the senior is still capable of making their own decisions, and understands the risks, I’m ready to let it be their choice.

I agree, but remember also, that at 96, they were born in 1919, and hence grew up during the Depression and then WWII rationing. Their [quote=“lagatta, post:12, topic:2531”]
I pretty much let my cat eat whatever he wants now (with my vet’s approval). He’s almost 20 (will be 20 in March if he lives through the winter) so he is in the same territory.
[/quote]

No offense, but this is a really bad analogy. For starters, what cats eat is not affected by their reading food ads, hearing that gluten is bad for them or that oat bran is good, or all sorts of other influences people have on their eating habits that cats do not.

And 96-year-olds were raised during the Depression and lived during the rationing of WWII and do not always look at food costs in a way that is rational for the 21st century. (My father definitely tended toward the cheap foods, and when a live-in care-giver was taking care of my mother and doing the shopping, my father thought the bills were really high and she must be skimming some off. No, she was just buying fresh fruits and vegetables and cooking healthy foods, not frozen individual pizzas.)

Frankly, animals are probably smarter than us about what they eat (although pets pretty much eat what they’re fed, and that could be anything).

I’m glad you aren’t offended by me bringing up my cat! He is my favourite sentient being on earth, and I certainly don’t want to put down fellow humans.

eleper, I prefaced my remarks by saying a doctor should have the last word, and when talking about whether a senior was capable of making their own decisions, I was assuming that those nearby would recognize persistent irrationalities in their thinking. My late MIL grew up during the Depression and WW2, and she went for the cheesecake and plenty of other expensive “luxury” foods for what I thought were obvious reasons. No inevitablities about how people process their experiences.

I once read an interview with a highly successful, very long lived man in Italy who vowed in his long ago youth that if he ever had money, he would never eat polenta again, having been forced by necessity to eat it 3 times a day when he was a child. When the interviewer rattled off a list of delicious and health-giving polenta dishes he was missing, he just smiled and shook his head. All sorts of things go into making a long happy life depending on who you are and what you’ve determined to do: eating cheesecake, turning your back on polenta, and I would even say being proud of being a miser when it comes to paying for food. If you’ve made it to 96, I figure you must be doing something right (plus the blessing of great genes).

I pretty much let my cat eat whatever he wants now (with my vet’s approval). He’s almost 20

20 isn’t that old…my neighbour’s cat died at 26. The oldest cat died 38 years old, and his lifetime, was occasionally treated with ham and bacon. If you listen to a vet, he would have told you cat shouldn’t eat cured meat nor salty food.

Personal anecdotes aside, 20 is considered very old for a cat. 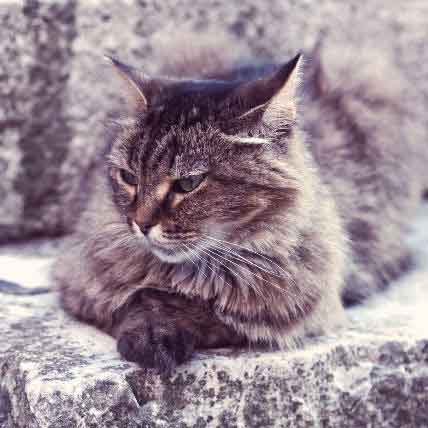 The Average Lifespan of a Cat Breed by Breed Chart

Cats come in a wide variety of shapes and sizes. As such, different cat breeds have different life expectancies. The average lifespan of a cat depends on a lot of variables -- from diet and exercise to their overall health to their breed. To get a...

We knew a man in Friuli (Northeastern Italy; like the Veneto, a place where poor peasants were mangiapolenta); he was active in the Resistance there as a young man. He wasn’t as adamant about never eating polenta again as the man Holy Terroir mentions, but was very amused that it had become “trendy” by the 1980s, when it was the staff of life for the poor in certain Italian regions.

I don’t give junk or overly salty food to my old cat; the only somewhat dubious food he gets is the odd sardine, though I do give him no-salt-added water-packed Brunswick sardines. There is of course naturally-occurring salt in sardines, but he doesn’t get more than half a sardine once in a while. And he purrs while eating it.

As for his “breed”, he is part Siamese and part “domestic shorthair” (or alley cat). He is black with a bit of white, Siamese voice and sleek short fur.

[quote=“lagatta, post:18, topic:2531”]
part Siamese and part “domestic shorthair”
[/quote] Well then, if he’d like to, he can call himself an Oriental Shorthair! I was one of the breeders who pioneered this breed in the USA. In the U.K. at the time, the all-brown ones created from Chocolate Point Siamese were called Havana Foreign Short hairs, those from Lilac Points were Lavender Foreign Short hairs, etc. Here, we began by envisioning a wide range of color possibilities, all with Siamese conformation but without the “point restriction” pattern that makes the color darkest at the coolest areas of the body. I imported a cream male from England but much of the foundation stock here was the result of crossing Siamese with non-pedigreed domestic shorthairs. Subsequent backcrossing to Siamese created a cat with all the behavioral and physical traits of Siamese save for the color pattern.

Congrats to you on his longevity. I agree, when a loved one (regardless of how many legs s/he has) reaches advanced old age, s/he should be free to eat/drink/smoke as desired.

Reminds me of my dad . At 96 we did have home care for him . I would bring a twelve pack of Coors beer over to the house , sneaking them into the garage without the nurse seeing . Then papa and I would go out to the shed and drink some beers . He would say , " This tastes so fucking good . " Then pickup and go back into the house like teenagers , having the nurse give us a dirty look .