The hit Bravo TV series Top Chef has helped many of its contestants gain exposure and advance their careers over the years. For Top Chef Winner, Chef Mei Lin, it helped with the launch of her first independent restaurant Nightshade a few years ago, which garnered a few “Best New Restaurant” mentions. With the pandemic, and Nightshade being an exclusively indoor, fine dining-ish restaurant, it seemed pivoting to takeout only was too difficult and Chef Lin decided to close the restaurant.

However with the Fried Chicken Sandwich craze hitting our nation over the last year or so, Chef Lin has developed Daybird, a new restaurant concept to tie into that zeitgeist but with a nod to her cultural heritage, resulting in Szechuan Hot (Fried) Chicken. 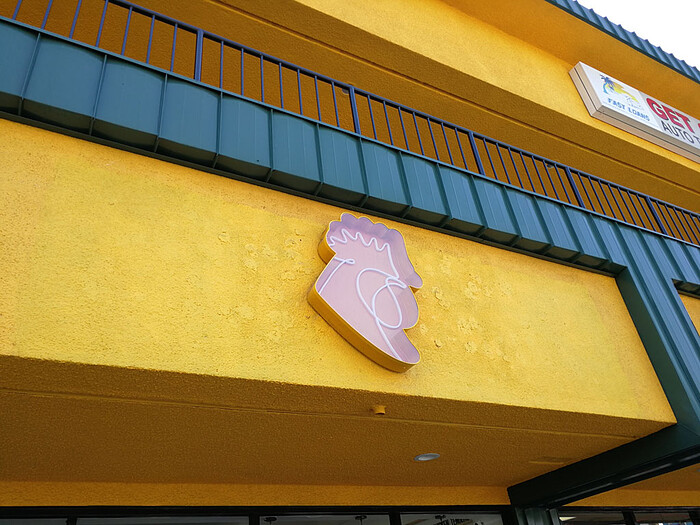 While it was only the first Grand Opening weekend, there was already a sizable line when we showed up. By the time we ordered, the line had grown to around ~30 people deep, mostly socially distanced. But by the time we finally got our food and left, the line was down to only 4 people.

The menu is pretty simple, just Szechuan Hot Chicken Tenders or Sandwich and Fries (and a choice of spiciness levels). 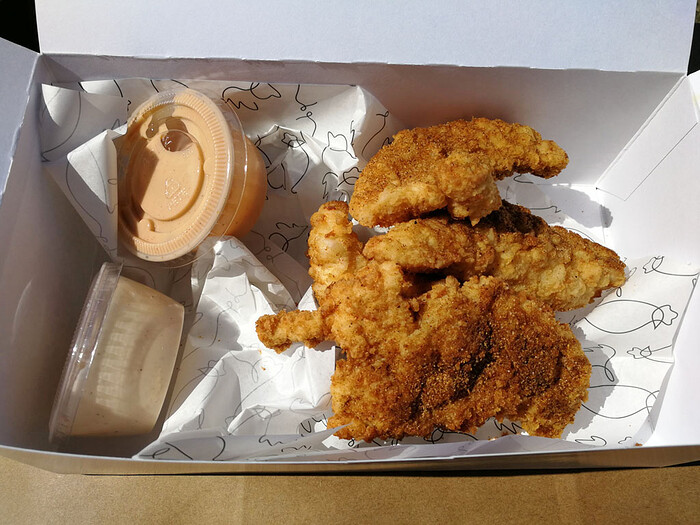 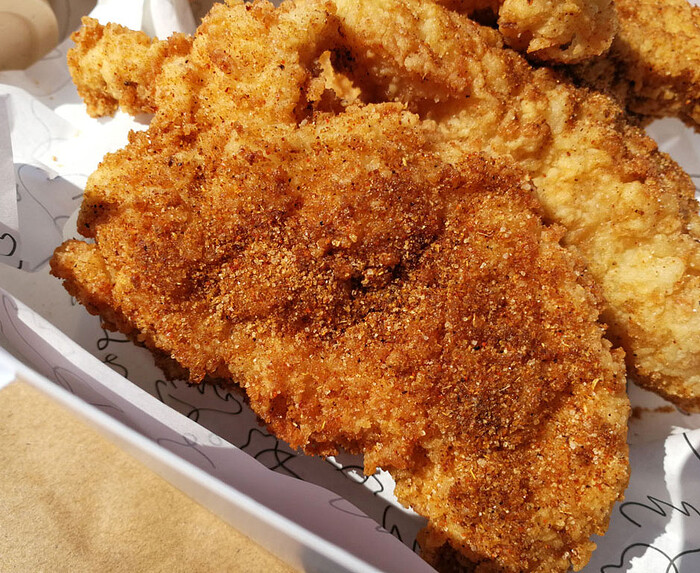 Daybird has 5 levels of spice: No Heat, Mild, Medium, Hot, and Extreme. For this first order, we chose Mild. It should be noted that these are definitely in the “Chicken Tenders / Fingers” vein, and not the “Chicken Strips” size of hefty, huge strips of Chicken Breast (as popularized by places like Dave’s Hot Chicken).

Daybird’s Chicken Tenders are dainty, a bit small, but thankfully it was moist and tender. There is a slight crunch to each bite, and the batter is different than their Szechuan Chicken Sandwich. On Mild, there is a feint, light spicy heat (less than Jalapeno Peppers), that is lightly sweet and aromatic. 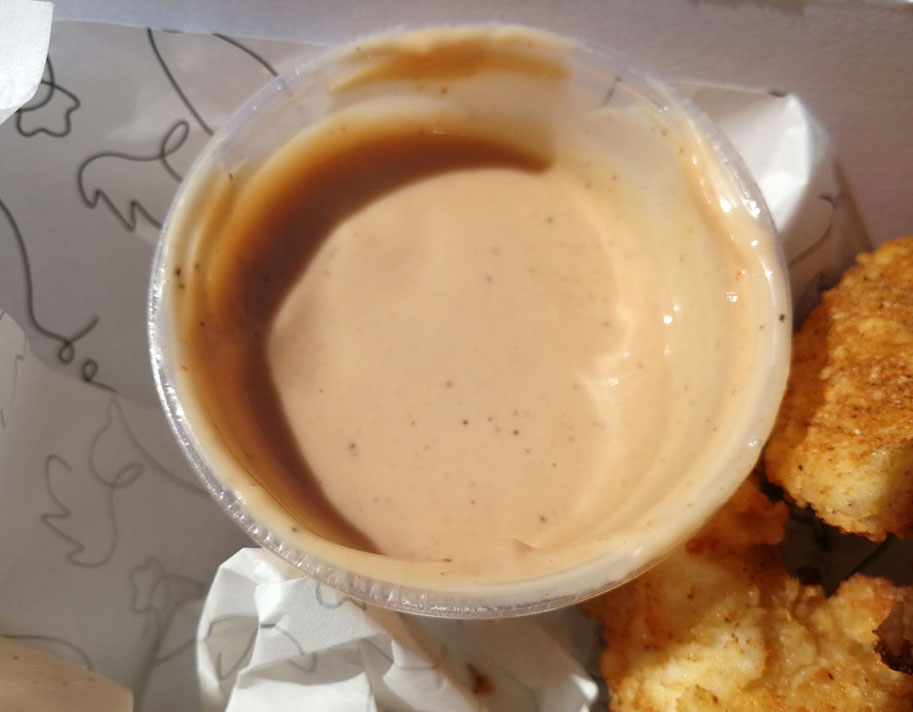 You get a choice of Dipping Sauces with your order, and their Daybird Sauce (which is Chef Mei Lin’s take on Comeback Sauce) has a creamy Mayonnaise-spicy taste to it. Not bad. 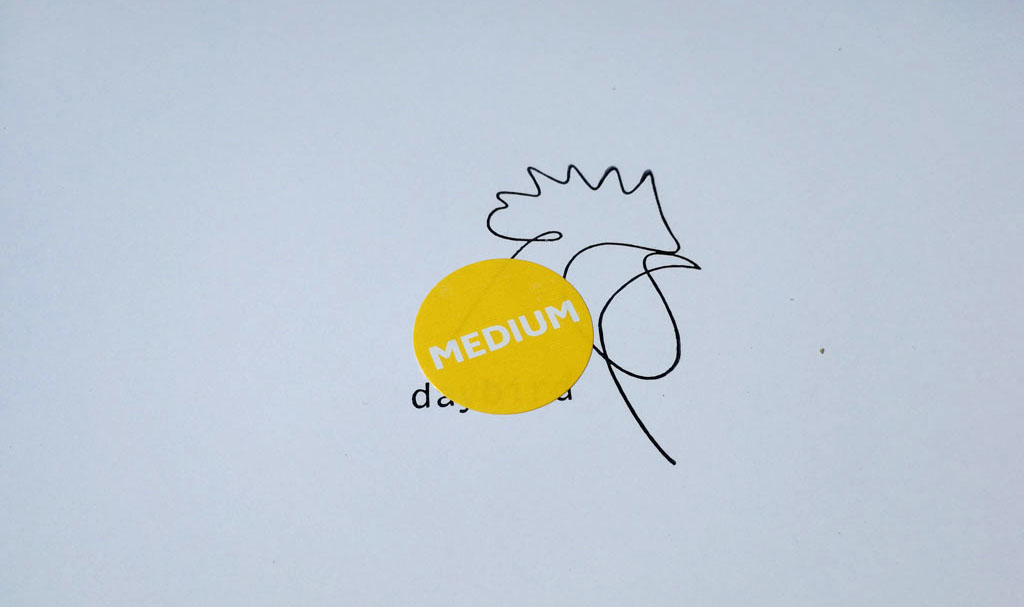 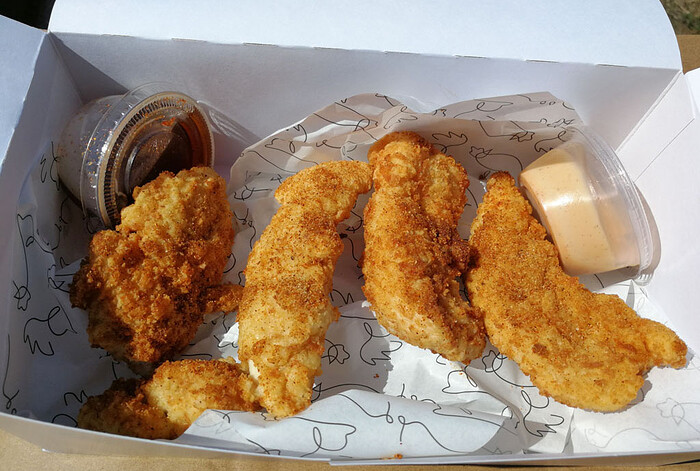 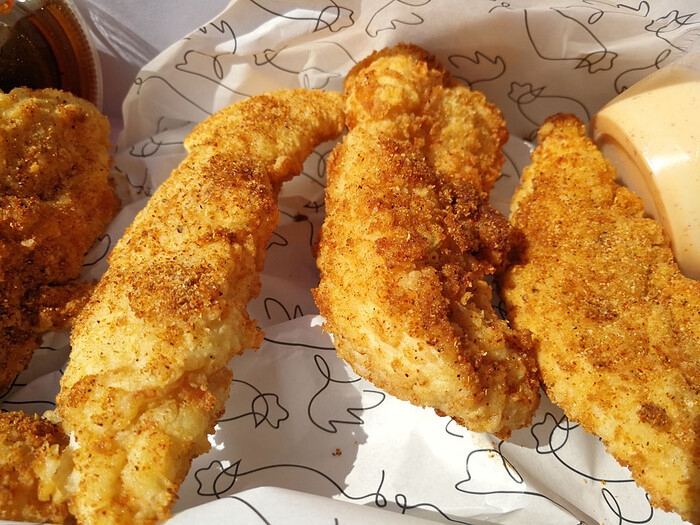 With their Medium spice level, there was definitely some burning heat, but it was still manageable. For reference, Howlin’ Ray’s Level 3 Medium is far spicier than Daybird’s Medium. It was an immediate heat that didn’t linger for very long and was probably a touch less spicy than Serrano Peppers.

Like the Mild, these Medium Szechuan Chicken Tenders had a very slight, feint crunch to them, but it was mostly a delicate breading. The white meat Chicken was still moist and juicy, but they felt like typical (but well-made) “Chicken Fingers” with a bit of Szechuan Chili flavor. 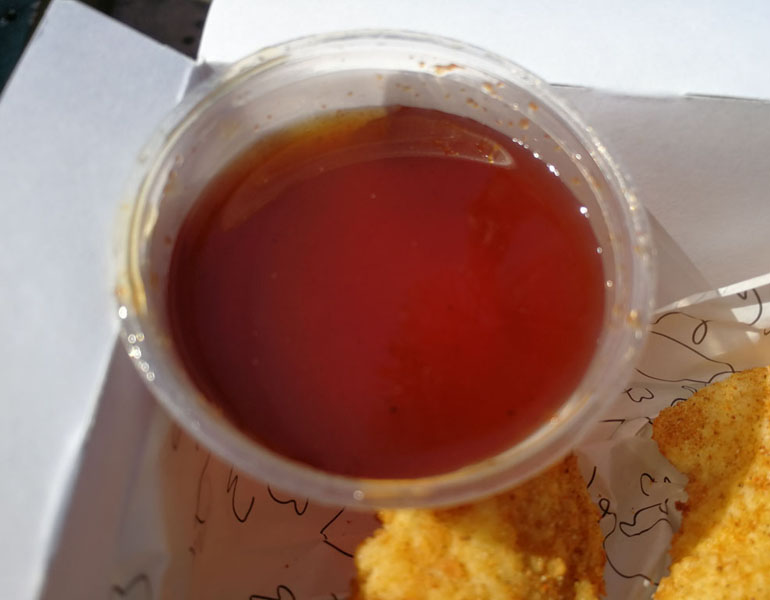 The Hot Honey Sauce was our favorite Dipping Sauce of the bunch, being, true to its name, a concoction of Honey and some Chili heat. It complemented the Chicken Tenders the most, adding a spicy sweetness. 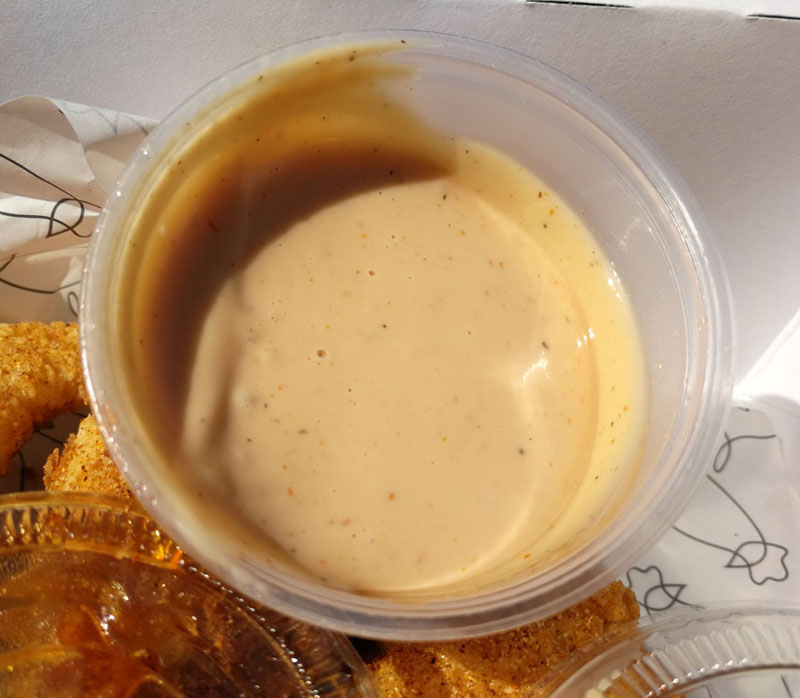 Their Habanero Ranch was surprisingly mild. We’ve had Habanero Chilies plenty of times, but this was pretty tame with some heat to it. Perhaps the Ranch Sauce base mellowed it out. Not bad for fans of Ranch Sauce with their Chicken Tenders.

Their Chicken Tenders overall felt a bit underwhelming. They weren’t bad, but where we see Chef Mei Lin shine is with her Fried Chicken Sandwiches. 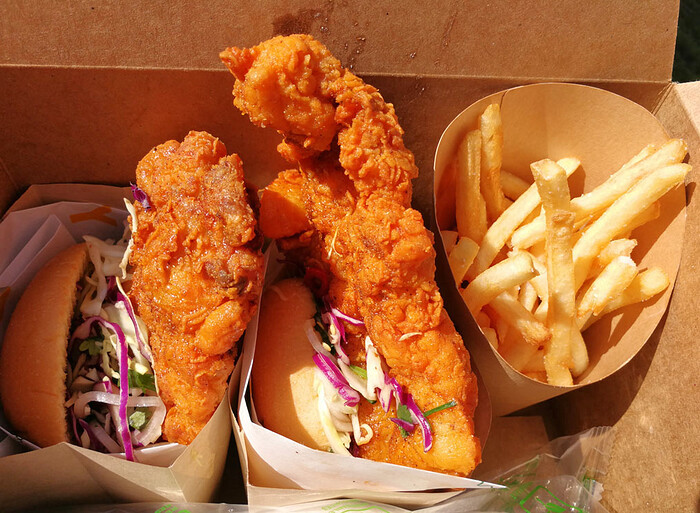 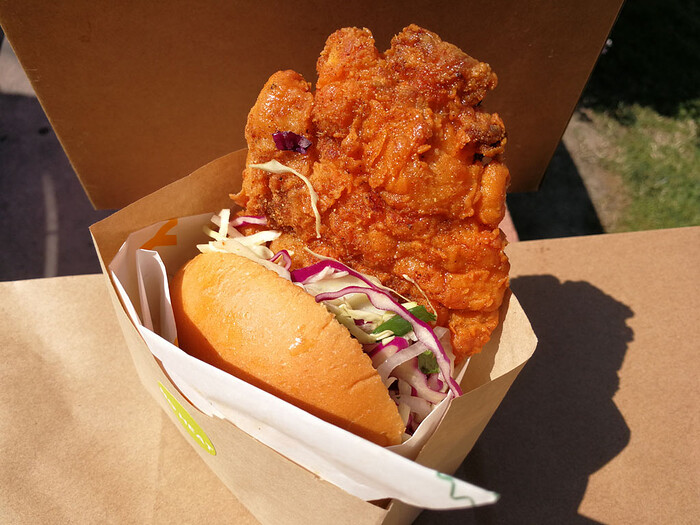 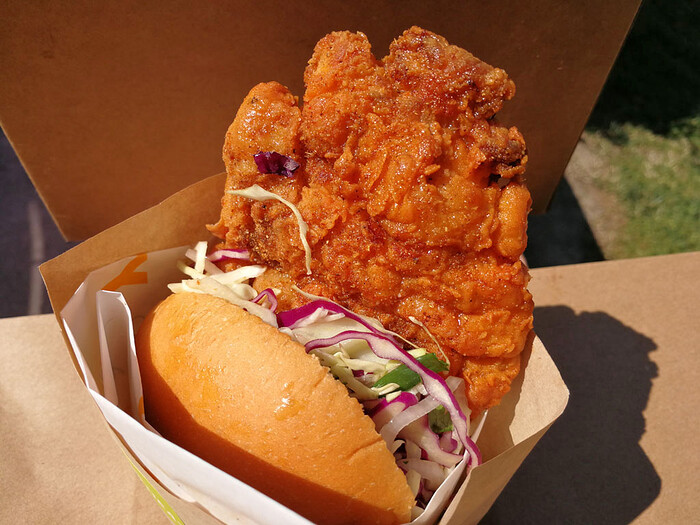 Chef Lin’s Szechuan Hot Chicken Sandwiches are all presented in a unique way: The Fried Chicken “patty” is a huge pounded piece of Boneless Fried Chicken Thigh meat that is far larger than the Bun itself. It reminded me of Hot Star Chicken, the Taiwanese concept that opened here in L.A. a couple years ago.

Taking a bite: The Buttermilk battered Chicken is crunchy (much more crunchy than the Chicken Tenders), and even with No Heat, there’s still a fragrant sweet spiciness (not “Chili Pepper spicy” but the non-spicy, aromatic variety (like Cloves, etc.)). The dark meat Fried Chicken is juicy, tender, and with a bit of the Martin’s Potato Roll and Pickled Chili Slaw, it makes for a delicious bite. 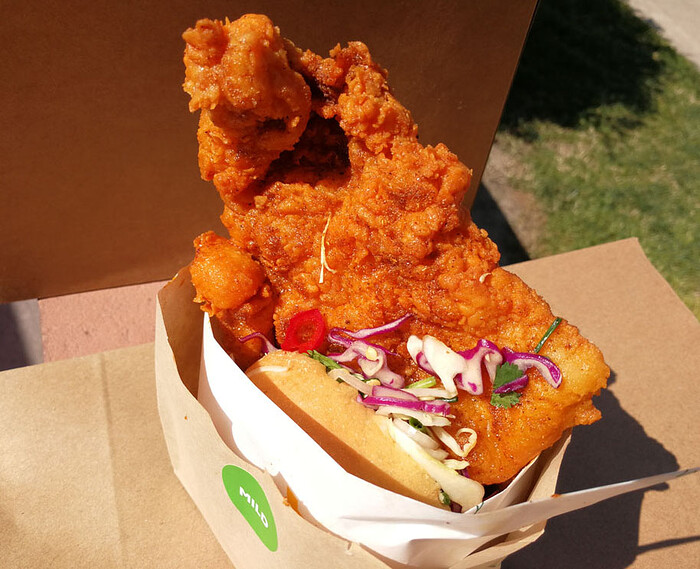 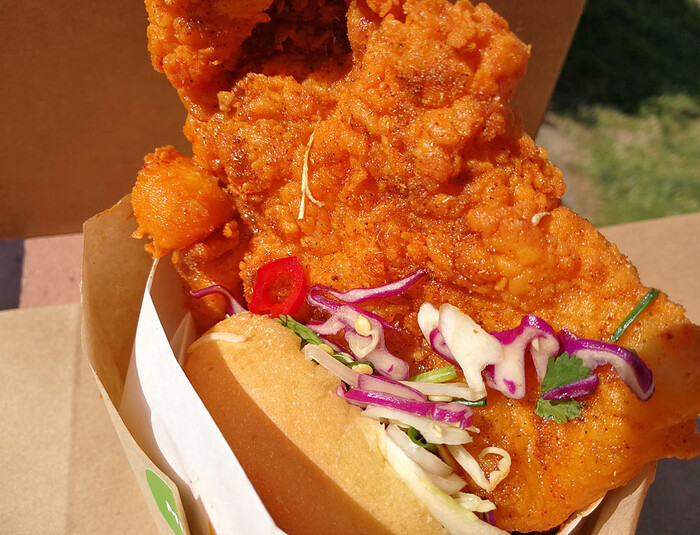 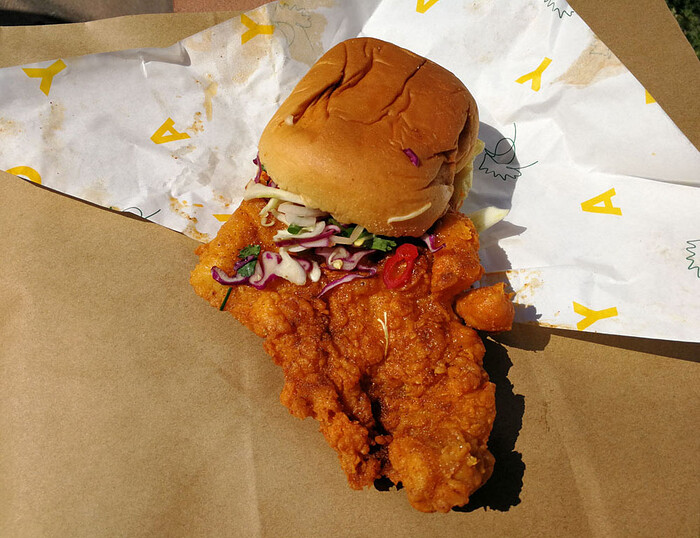 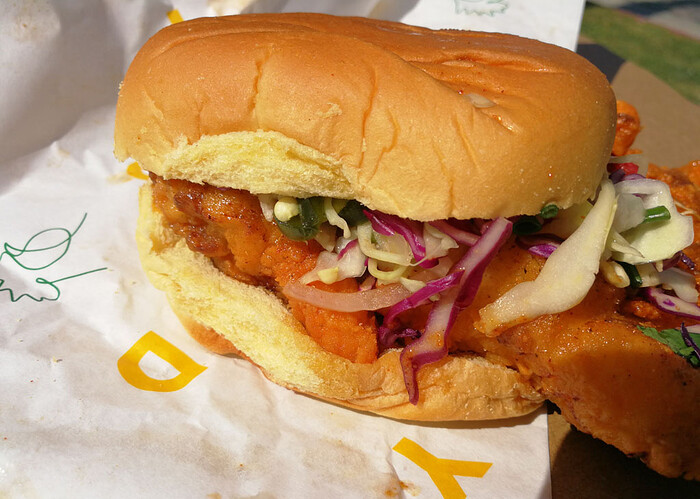 Their next level up for heat, the Mild Szechuan Hot Chicken Sando had a light burning heat to each bite. Similar to the Chicken Tenders, these were just a tickle of heat, weaker than Jalapeno Peppers. There’s a nice crunch in every bite, the Fried Chicken Thigh meat is the same as the previous one (good for consistency), moist, flavorful, and the light heat adds to the appeal.

If there’s one small quibble is that it did feel a bit heavy / oily after finishing the Sandwich, but it is Fried Chicken after all. We never got that feeling from OG Howlin’ Ray’s (made by the OG crew before COVID) as a point of comparison. 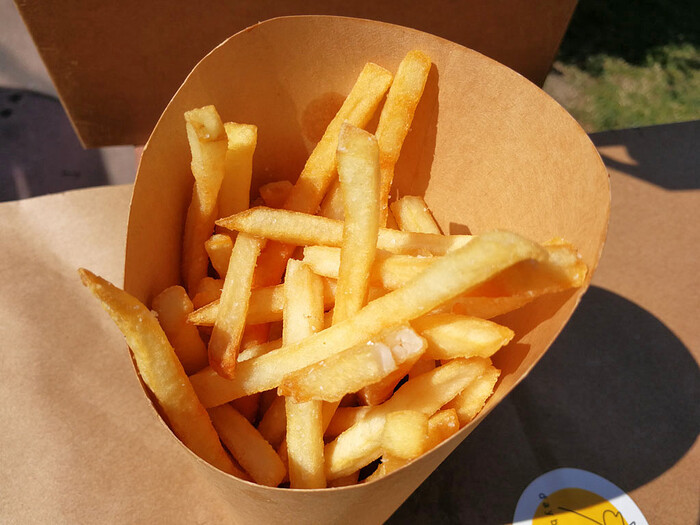 Their Fries were a disappointment.

We picked up our order as soon as they called it out, and ate it within a couple minutes, but the Fries were lukewarm-cold(!), and they were a bit flaccid and soggy.

Daybird currently is looking like a one trick pony, but what a pony it is: A standout, crunchy Fried Chicken Sandwich that leans on Chef Mei Lin’s twist of giving it a Szechuan Chili spike. Those that remember her Szechuan Quail from Nightshade can get an idea of where this Sandwich is at. It’s crunchy, aromatic, lightly sweet-savory and with juicy dark meat Chicken. The Pickled Chili Slaw helps liven things up, and the No Heat, Mild and Medium are all appealing. We heard a few people crying out in “Oooh!” “Wow!” type of “pain” from trying Extreme, so we’ll probably hold off on that for now.

The downside to Daybird is that besides the Fried Chicken Sandwich, there’s nothing else on the menu that stands out. The Chicken Tenders are decent at best (nothing standout), not very crunchy and rather small / poor QPR (4 small pieces for $13 (+ tax & tip)). The Fries are terrible, and that’s the menu. So it feels like an “incomplete” meal experience at the moment (just the Sandwich, nothing else).

Also, Chef Mei Lin was personally frying every single order(!) which helped with the quality for the Grand Opening, but the wait time was pretty long (~25 - 30 minutes per order). One has to wonder if this is really sustainable (it’s not). So when Chef Lin hires more staff, how will the quality hold up? One hopes she finds staff as consistent as what Chef Johnny Ray Zone did for Howlin’ Ray’s, keeping it running like a well-oiled machine.

If Chef Lin can keep up this level of quality for the Szechuan Chicken Sando, get more efficiency so every order isn’t taking nearly 30 minutes, and adds a few other standout menu items, then Daybird is going to be a destination. In the meantime, stop by for a fantastic Fried Chicken Sando if you can brave the lines and wait times.

I’m actually okay w/ a one trick pony. Given the current circumstances, I’d be a little suspicious of a place offering a huge array of dishes.

Had the HR chicken sandwich during the pandemic, and it was exactly as you said. So I’m happy to have another alternative that much have some more crunch intact.

BTW, they are closed on Sundays during soft opening (I know b/c I tried to order today!).

Yah, I’m OK with a specialist, even if they can only make 1 item well, if it’s that standout. And for Daybird, the Sando definitely is a standout.

Looking forward to your report back .

Sadly no daybird today at 3 p.m.

Bummer, sorry to hear they were sold out by 3 p.m. (but good for them!). Hope you get a chance to try the sando and see what you think.

Those are some good looking chicken sandwiches. Too bad the tendies weren’t as good, wonder why they don’t use the same batter. I love that the chicken patties in the sandwiches are ~2x the size of the bun

Hard to believe it’s been 2 months since our last visit to Daybird, but given that it was a one trick pony, we weren’t in a rush to return (even though it was quite tasty).

On this weekend visit, there was no line, but still quite a few people already with food eating. Perhaps they had gotten really efficient? (Which is great news.) 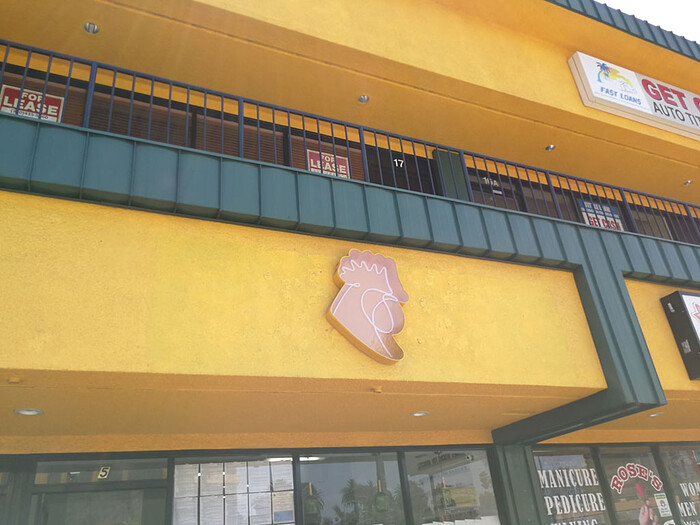 Walking up to the window and looking in, Chef-Owner Mei Lin was nowhere to be found. She had apparently found assistants who could help run Daybird now (which is totally understandable). 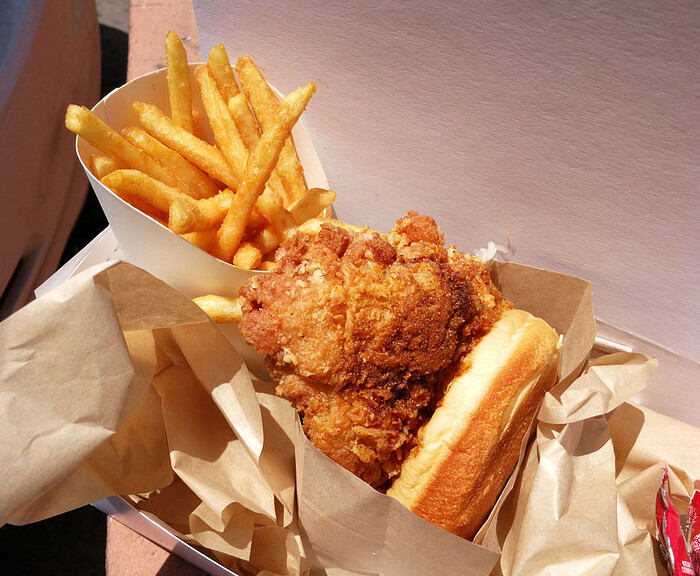 First, we noticed that the breading looked completely different than their Grand Opening version!

Comparing pictures, it’s clear that the breading they use now is just the same breading as their Chicken Tenders (which were mediocre at best). 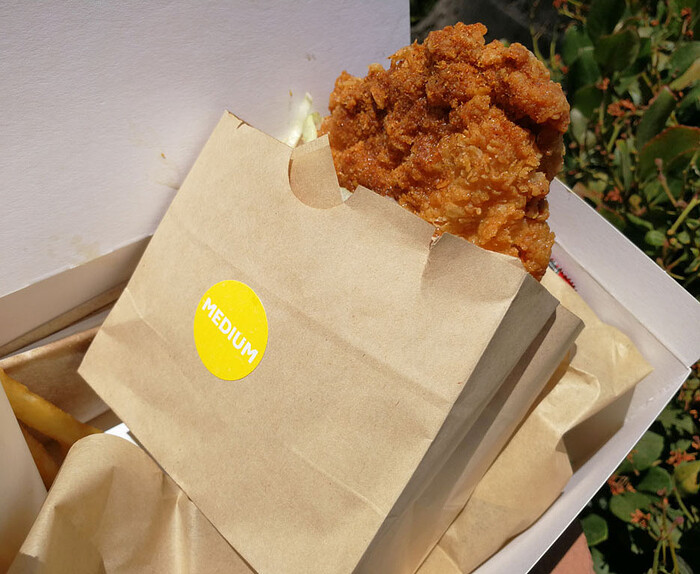 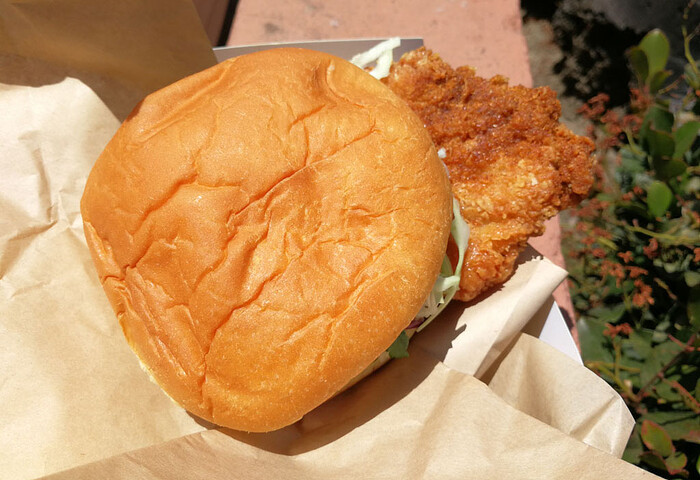 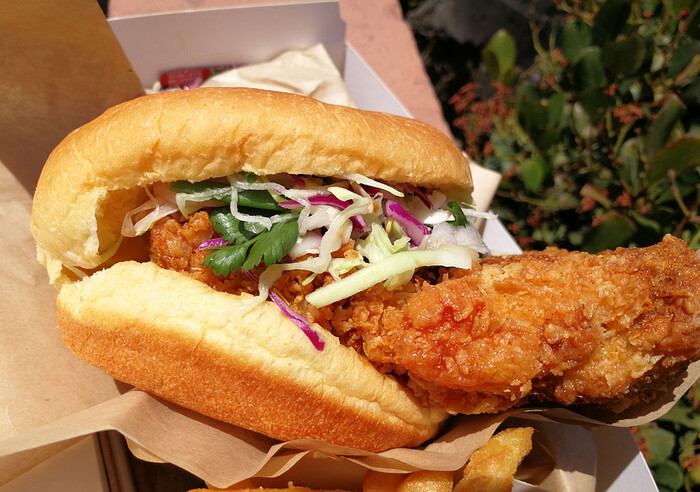 In addition, the Fried Chicken Patty was nowhere near as pounded / flattened as the OG version. The color even looked different. Not good. But we were hopeful.

Uneven frying. The breading is oily, there’s undercooked breading (some raw-ish looking dough within the Chicken Patty), and there’s chunks of unrendered Chicken Fat as well.

The Medium Spice level is sweet spicy, an immediate heat that’s much more gentle than Howlin’ Ray’s but still has some kick. At least that is consistent. But the Fried Chicken itself was dramatically worse.

(And I had to spit out some of the undercooked breading.) 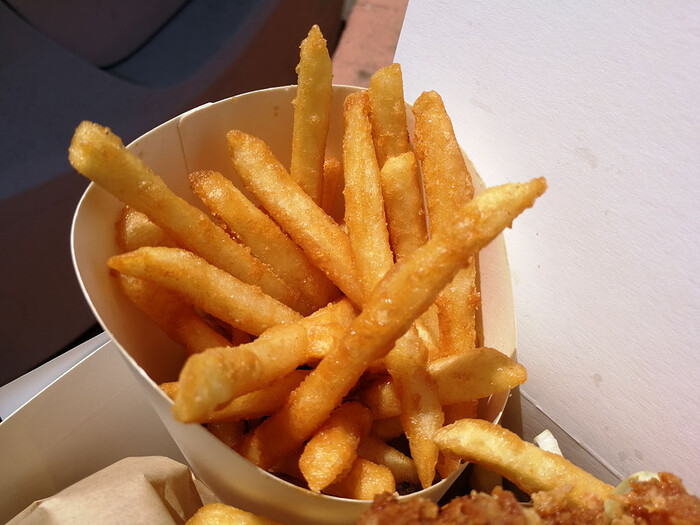 Daybird has now been handed off to assistants / help and Chef Mei Lin is no longer cooking in the kitchen (at least on this visit). Unfortunately her help is not properly trained. The breading is different, the frying technique is shoddy at best, and Daybird is putting out mediocrity with a tasty spice mix at least.

We’ve seen this time and again in L.A.: Celebrity / famous Chef opens a new restaurant. Cooks there for a few weeks / first month or so, leaves and the replacement help is not properly trained and lacks the skill level to execute. If today’s visit is indicative of the level of Daybird now, it’s now fallen to the “average Fried Chicken Sandwich” tier in L.A.

That’s disappointing to hear about the sandwich. I really enjoyed it the one time I had it, and I’m pretty sure if must’ve been w/ the old recipe. My fries were also really good, so I might’ve hit them at their peak. Hope they change the recipe back. I’m not on social media, but it looks like they have an IG page, so hopefully someone let’s the chef know what’s going on…