From the Boston Globe...pop ups!

On the dining scene, novelty now comes in the form of happenings rather than openings. 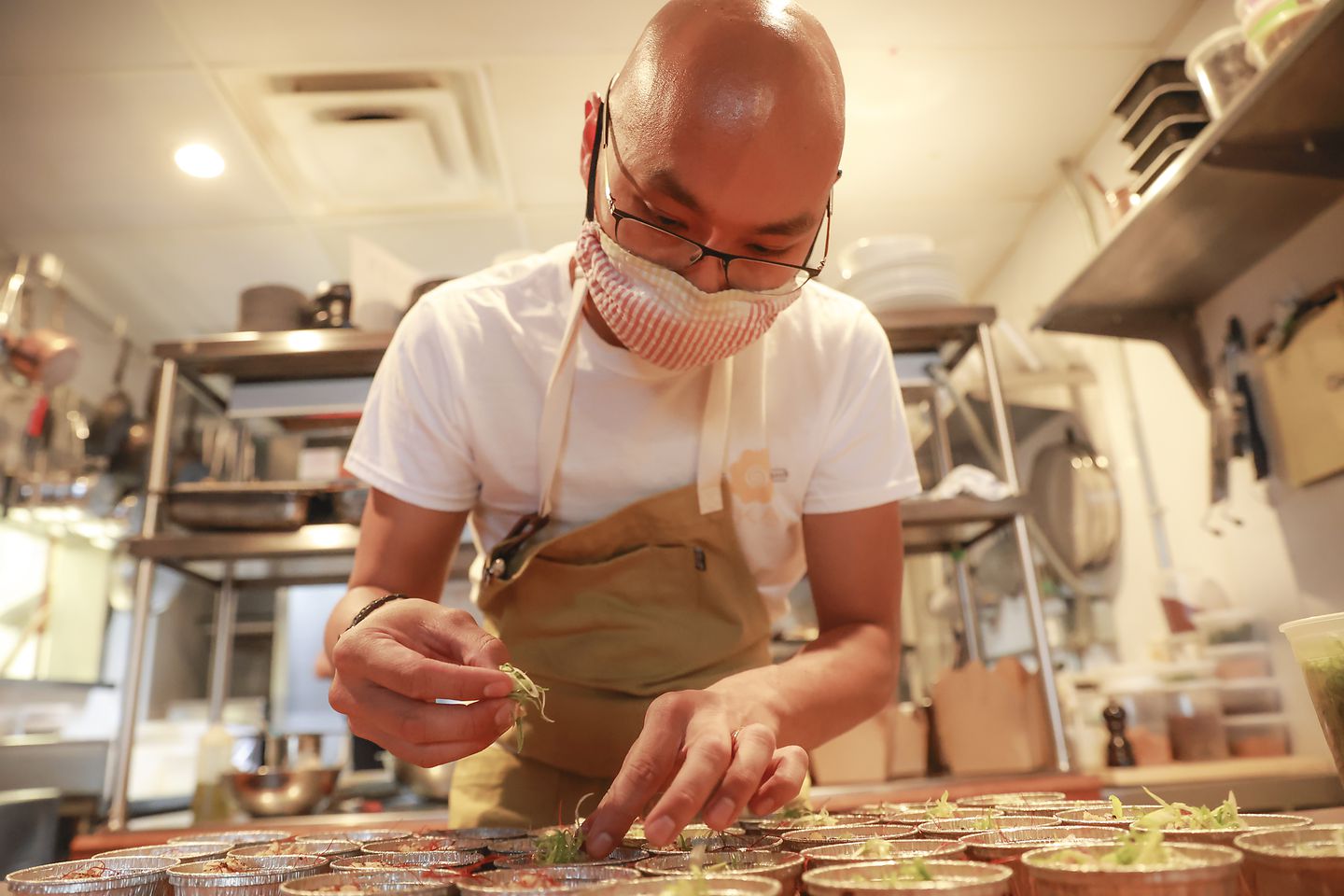 Chef Derrick Teh preparing the blue crab and Maine uni dish at the Sekali pop-up to go at the Fat Hen kitchen.1440×960 146 KB

Chef Derrick Teh preparing the blue crab and Maine uni dish at the Sekali pop-up to go at the Fat Hen kitchen.MATTHEW J. LEE/GLOBE STAFF

At the end of September, the pop-up Bún Bò Bui posted for the first time on Instagram. A week later, founders Stef Bui and Bob Mersereau were already serving their Vietnamese specialties at Black Lamb, a South End restaurant run by friends from the days all worked at Barbara Lynch restaurants together.

Ordinarily, the couple can be found at Seaport restaurant Chickadee, where she is chef de cuisine and he works on the beverage side. But pandemic life is anything but ordinary, and Black Lamb had started hosting pop-ups; Bui and Mersereau took the opportunity to highlight Vietnamese dishes beyond the pho that is familiar to many in the Boston area. “I grew up in Southern California, and there’s tons of awesome Vietnamese food out there. It’s something I wanted to showcase,” Bui says. “We’d been thinking about it before COVID, but I never would have thought COVID would be the right time to do it.”

The pandemic continues to devastate a restaurant industry now heading into the colder months when outdoor dining becomes less appealing. But during this time, a host of alternative projects — pop-ups, independent delivery, prepared foods — have debuted, drawing audiences via social media and word of mouth. Making use of existing kitchens, operators don’t have to shoulder all of those costs. And diners can partake in a revolving feast of dumplings and doughnuts, noodles and Nashville-style hot chicken sandwiches, seven-course Japanese meals and Malaysian menus that sell out in minutes. New restaurants are a rarity at the moment, but there is still fresh energy on the scene. Novelty now comes in the form of happenings rather than openings.

Get HomeFront in your inboxThe Weekender is temporarily HomeFront, your guide to the best ways to stay entertained at home any day of the week.

The people behind these projects have often worked at some of the area’s best restaurants: No. 9 Park and Sportello, Oleana and Sofra, Momi Nonmi and Pagu. Some are ramping up existing side hustles or launching new ventures after being furloughed or laid off. Others would have opened their own restaurants by now but are biding their time in an uncertain climate, using this as an opportunity to do R&D and build their brands. 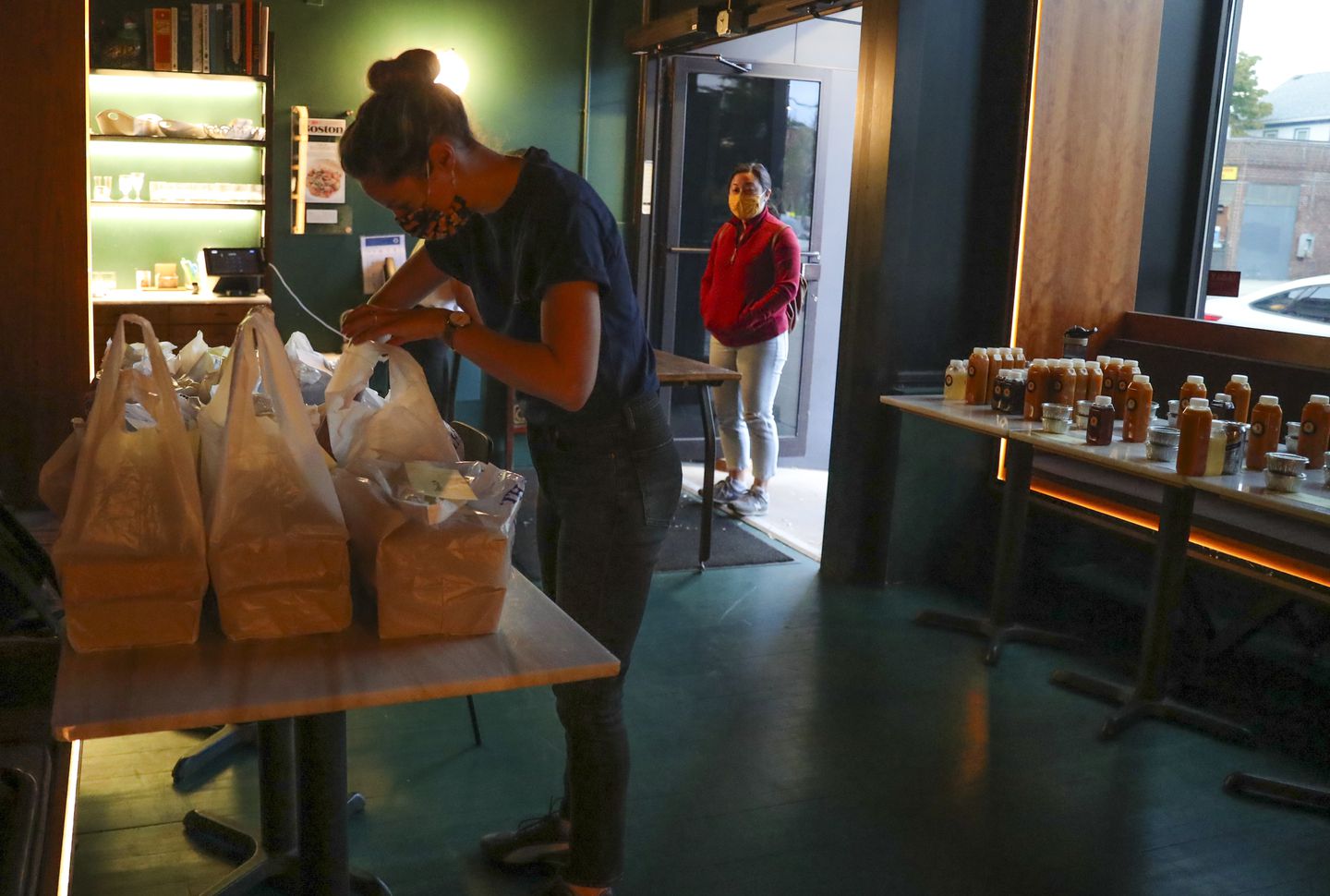 Kate Hardy gets a customer’s dinner order ready for pick up at the Sekali pop-up to go at the Fat Hen.MATTHEW J. LEE/GLOBE STAFF

“Buying real estate is not smart at the moment,” says Kate Holowchik, who has worked as a pastry chef all over town, at the likes of Capo, Ledger, and Yvonne’s. She recently launched Lionheart Confections, doing doughnut pop-ups, making custom cakes, and more. In the process of looking for a space when the pandemic began, she has put that on pause for the time being. “I’d rather tread water until it’s feasible. If I do enough pop-ups and get enough face time, when I have a brick and mortar, people can say, ‘Oh, we know her. We’ll support her.’”

Jon Awerman and Ted Woo, the team that makes up Mimi’s Chūka Diner, met working at B&G Oysters. They began planning for a restaurant that would serve chūka ryōri, Japanese-style Chinese food, back in 2018. In January, they started hosting pop-ups, readying to look for funding and a location. Then everything ground to a halt; Woo was furloughed and Awerman laid off. They had to figure out how to proceed. 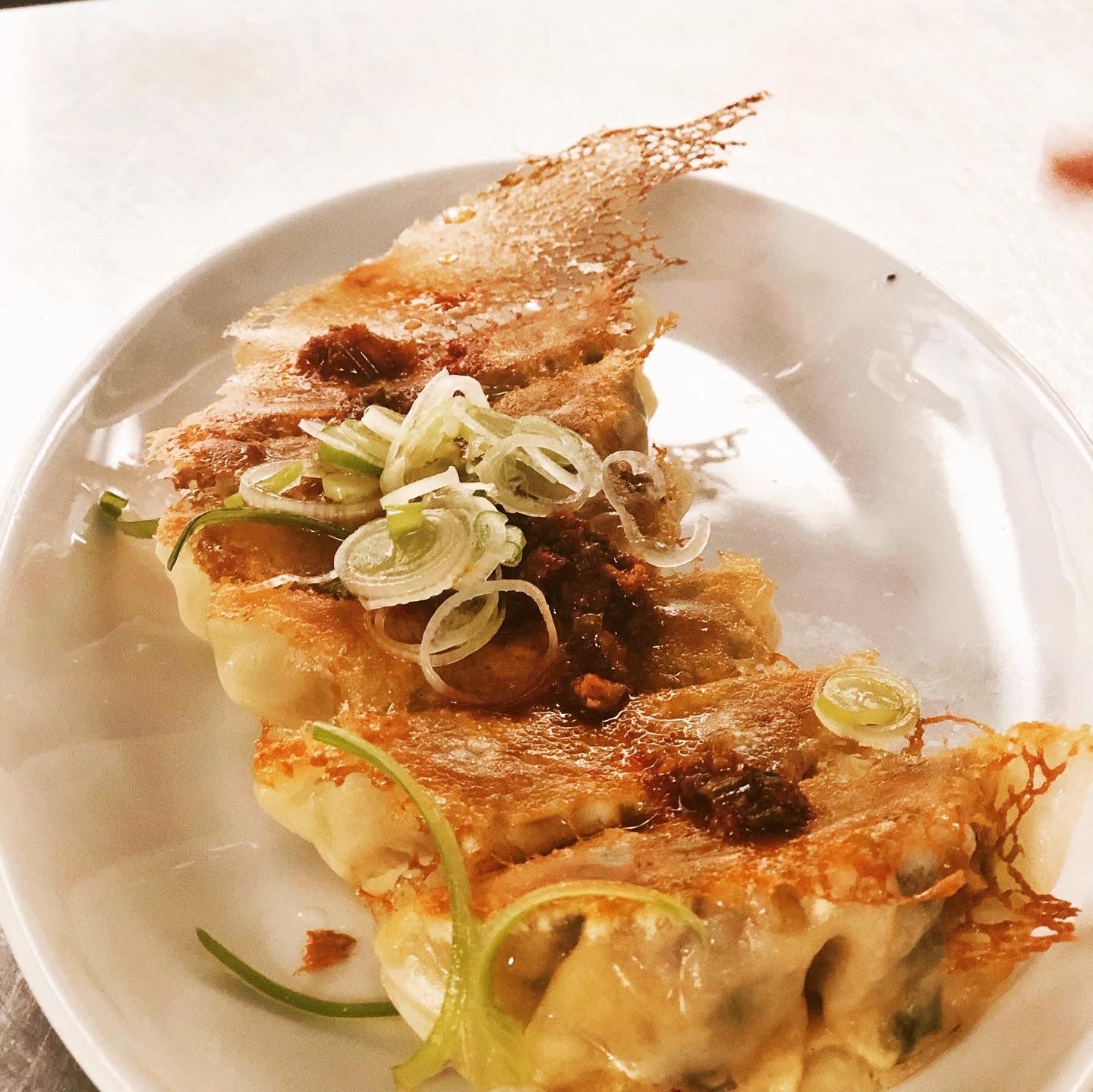 The answer: dumplings. Their friend Alex Nystedt, another Barbara Lynch alum, last year launched his pop-up, Hot Chix, with partners Alex Kim and William Yoo. Nystedt connected Mimi’s with the folks at Idle Hour in Quincy, one of the locations where he had been prepping and selling hot chicken sandwiches and sides. Could they use the kitchen to make frozen dumplings?

They could, and they did. “Frozen dumplings were a shift in direction so we could build our brand at a time when hot food would have been difficult for us,” Awerman says. With Idle Hour as home base for production, they began delivering frozen gyoza, Sichuan-style wontons, and accompanying condiments on Sundays for preorder within a 7-mile radius of the South End. “We do pretty much everything ourselves, from graphic design to delivery.” 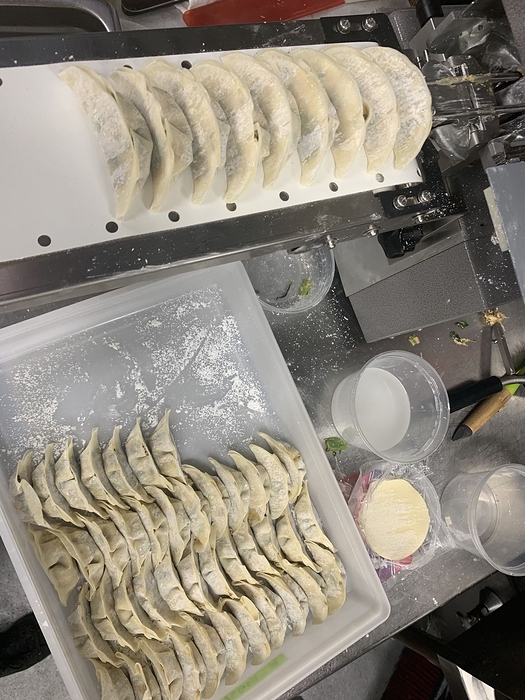 Gyoza being made for Mimi’s Chūka Diner.COURTESY OF MIMI’S CHUKA DINER

From April to August, Mimi’s was solely a frozen dumpling delivery service. Then they started doing pop-ups with hot food: a series at Black Lamb for three Mondays, a September event at Idle Hour, several dates this month at CREATE Gallery & Cocktail Lounge in Somerville’s Bow Market. They’ll be taking over the kitchen at Black Lamb the next two Sundays, serving dumplings and steak fried rice, then heading to Fort Point cocktail bar Drink for a tiki event with bar snacks.

It’s a juggling act, but for the moment it’s working. “Idle Hour is open seven days a week, so we have to squeeze in time after the cleaner comes,” Woo says. “They finish at 10:30 a.m., and Idle Hour starts prep at 1:30, give or take. There are anywhere from four to six of us in the kitchen space, with us trying to wrap up operations in a three-hour window.”

It’s also a way to maximize use of facilities. In Somerville, Fat Hen focuses on Italian tasting menus, now opening for regular service only on Friday and Saturday. They are trying to schedule pop-ups Sunday through Thursday when they are closed. “We have had to rethink, pivot and pivot again, over and over to try and figure out how to make things work during this pandemic,” says chef de cuisine Brian Miller via e-mail. (He was the only one working at the restaurant that day; Fat Hen is still serving takeout and has also introduced Fat Hen @Home, where chefs bring fine dining to customers where they live.) Pop-ups might pay a percentage of the sales to cover overhead costs and equipment usage. 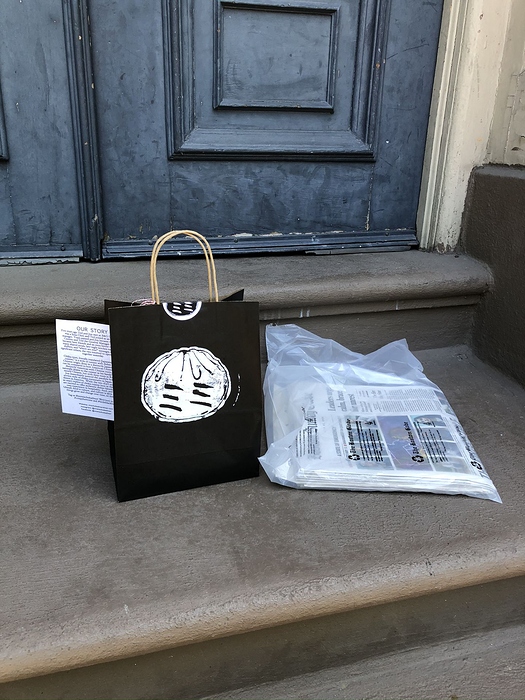 “Our goal for the pop-ups isn’t to profit substantially but to have the space be continually in use while Fat Hen is closed during the week,” Miller says. “Ultimately, there isn’t anything that is a sure thing to remain sustainable right now. Our hope is that … providing a space for friends and industry family to continue doing what we all love will allow us to keep the lights on and the doors open until we are able to get back to a normal industry standard. I can’t imagine doing anything else. I’ve been in the industry 12 years and have dedicated my life to the craft. It’s absolutely traumatic to look around and see some of the most talented people I know in this industry be out of work.”

That supportive attitude is characteristic of the local restaurant industry. “I always thought Boston had a small culinary scene, and it’s even smaller now. It’s an immensely helpful network,” says Awerman of Mimi’s Chūka Diner. “It has been a nice, positive thing to see during this pandemic. Boston helps prop each other up and support each other.”

When chef Derrick Teh was furloughed from his job at Momi Nonmi, he turned to Sekali, a pop-up he started in 2018 featuring his native Malaysian cuisine. “I thought to myself: I have a brand. How can I bring this to the masses while in a pandemic? OK, what if I create a short menu and deliver it to people? It actually worked.” 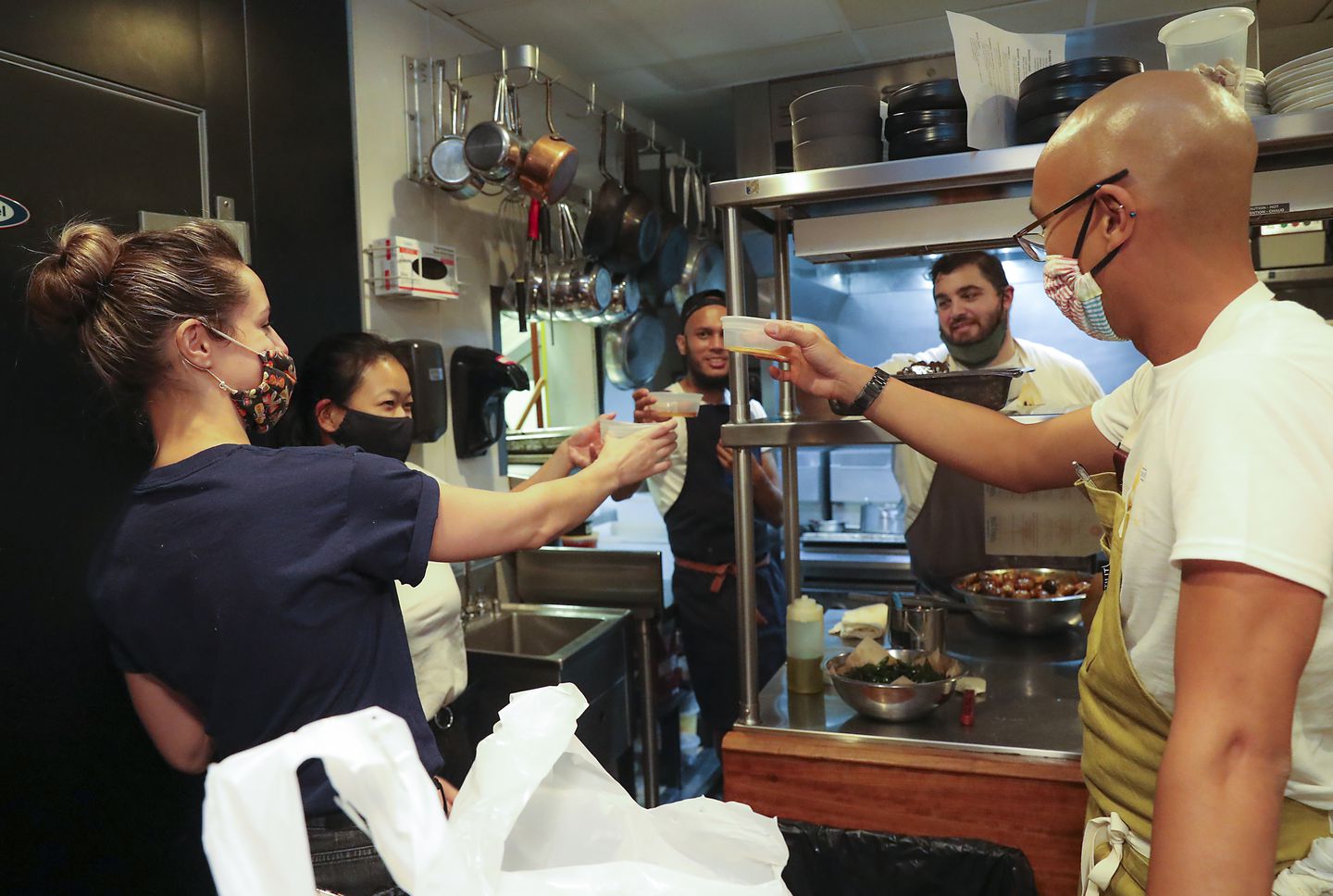 The delivery platform was profitable, so he was able to give back to industry colleagues who were out of jobs. He began preparing and serving family meals at Momi Nonmi on Tuesdays, donating leftovers to a nearby homeless shelter. He also started donating meals to medical departments.

Now he’s doing Sekali pop-ups full-time, taking over at places like Fat Hen and Little Dipper in Jamaica Plain, and collaborating with Momi Nonmi chef-owner Chris Chung. Teh’s menus of roti john and rendang, curry laksa and kaya toast, plus drinks made by bartender Koharu Usui, sell out almost as soon as the signup form is sent. Trying to get Sekali’s food is the pandemic equivalent of clicking repeatedly, or remembering to call on the first of the month, to make a reservation at some newly hot or long famous restaurant. 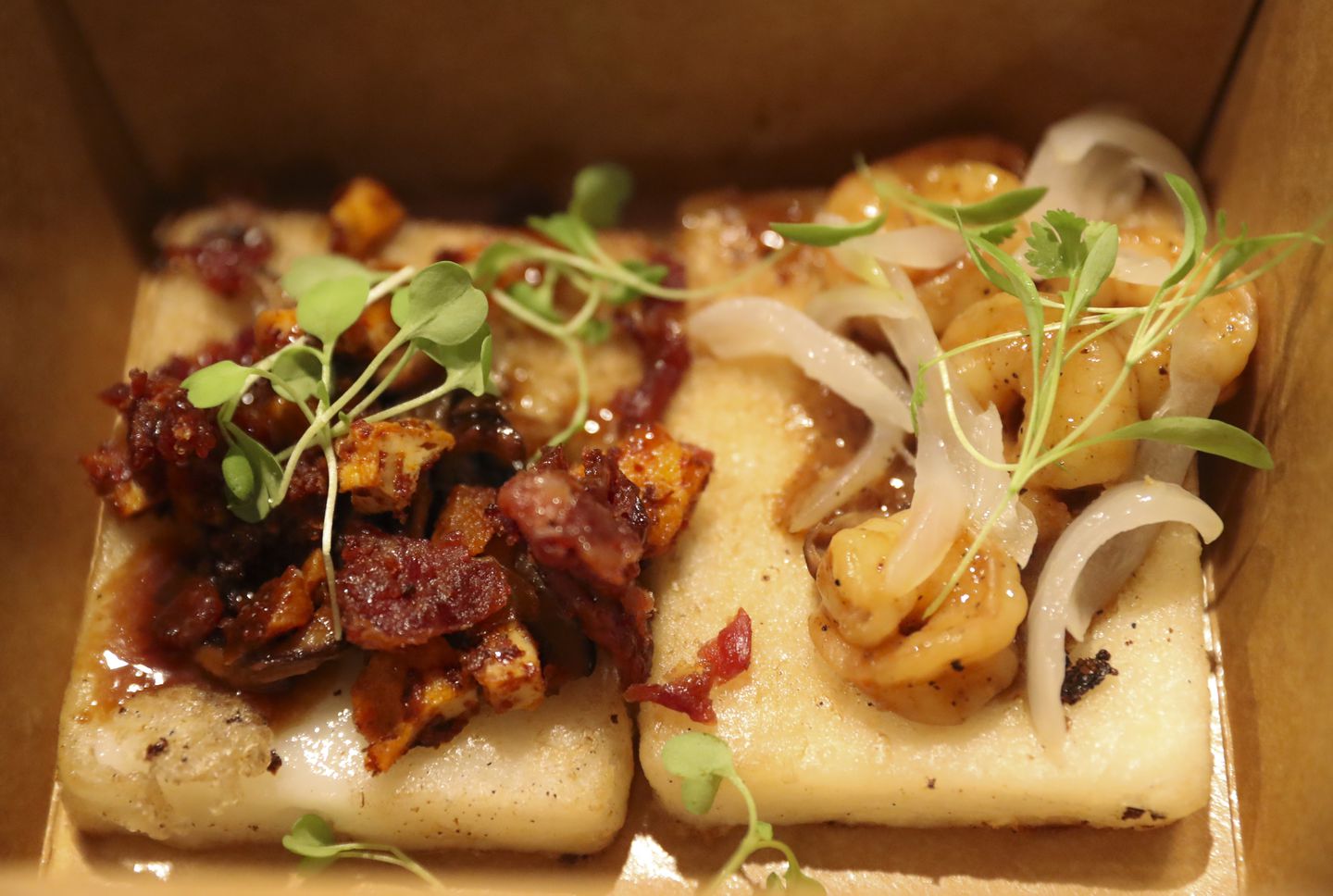 An appetizer at the Sekali pop-up.MATTHEW J. LEE/GLOBE STAFF

“If you said tomorrow, do you want to open a restaurant for me?, I’d say no thank you because it’s so much uncertainty,” Teh says. “I commend all the restaurateurs that are open and have opened through COVID. It’s a feat on its own. For me, that risk is too high to take. My team, I don’t want to put them at risk as well just to open up a restaurant. But 2021, 2022, we’ll see what happens. I feel I’ll be more comfortable in a year or two.”

In the meantime, venues like CREATE Gallery & Cocktail Lounge will continue to serve their own menus and play host to newcomers like Lionheart Confections, popping up there Oct. 24. “There’s a lot of hustlers out there. Boston’s a scrappy city,” says CREATE’s Louis DiBiccari. “Figuring out how to bring a brand to market, it’s such an interesting time to do that. There’s a lot of support for small business right now. Everyone wants to jump on the bandwagon and give you a boost.”