So, mostly out of boredom and the lingering widespread Covid, political and social isolation, Wahine and I joined one of the traditional USA fraternal organizations. It shall remain unnamed for the time being. One of the positive things we’ve discovered is that socializing over food is important, at least at our “chapter”. The facility has had a commercial-grade kitchen for many years, and recently replaced its ranges with a pair of quite spendy restaurant models.

At this place, there are about 10 meals per month offered, 9 of them dinners. One of the meals each month is always a steak dinner. We’ve now been to 3, and while Peter Luger’s shouldn’t feel threatened, maybe Ruth’s Chris should be. An Enormous ribeye, grilled to order, baked potato with fixins’ and vegetable, is $18. Pizza night features perhaps 10 topping options (including crustless), and is surprisingly better than those at Costco and take-n-bake outlets. Other semi-regular meals include smothered burritos, burger dips, Swedish pancakes, etc. Members who fish regularly bring in fresh crab, oysters and salmon, for chapter equivalents of pop-ups. For the town’s street fair, the chapter did a Cajun Microwave pig(s) that tasted as good as my native pua’a kalua. This Thanksgiving, there will be complete takeaway turkey dinners. Plain food, but rock solid and nothing to apologize for.

I volunteered to serve at our first steak night, and IMO, the entire kitchen crew was extremely competent. I’ve been similarly impressed with all the other meals’ execution.

Now comes the fascinating part for me. I was recruited by the recent past president of the chapter. He made it clear to me that everything–everything– about the chapter’s activities is up for ideas and a vote, including the food offerings and meals. Have a good philanthropic idea? Present it, and try it! Same with the food. They also do special benefit charity food events off-site: I haven’t been to any of those yet, but they get glowing reviews.

This was a revelation for me. People open to new ideas, and willing to fund them? Competent, motivated and unpaid volunteers willing to make it happen? Members who want this kind of interaction? Who wanted to be there, and who were willing to accept the occasional watery green beans because they knew the steaks would be great and and their friends would be there in conviviality and philanthropy?

I was recently at another “chapter”, and learned that a retired restauranteur member there is a local legend when it comes to clam chowder. He somehow sources and grinds his own fresh local clams (may dig them, too), and I heard enough detail to bet my bottom dollar that his chowder is worth making a long drive for, and giving the secret handshake is a small price to pay.

I’m very interested in others’ experience with the food aspects of fraternal organizations. Maybe mine is lucky, but I hope not.

I am in a sorority; a Historically Black one. It’s a service organization, and food is not a focus, but I have posted off and on about my attempts to support the needs of my chapter.

ISO a good recipe for vegan breakfast bars/cookies that non-vegans might try. Recipes

The struggle is real! For a few years I have posted about trying to find a recipes that will work for a group I belong to. …with one vegan member. She continues to say there is nothing for her to eat, in spite of what I have tried, but I actually enjoy this annual adventure. I made a granola a few years ago that I loved, and was well received, but I don’t know that it was vegan. More than once the culprit has been honey. This year I’m wanting to experiment with vegan breakfast cookies a…

I guess the VFW is not fraternal organization per se, as many females have served overseas but this place in RI is legendary and not resting on its laurels, although it has been some years since I’ve eaten there. But I’m willing to attest to the food, especially the polenta. 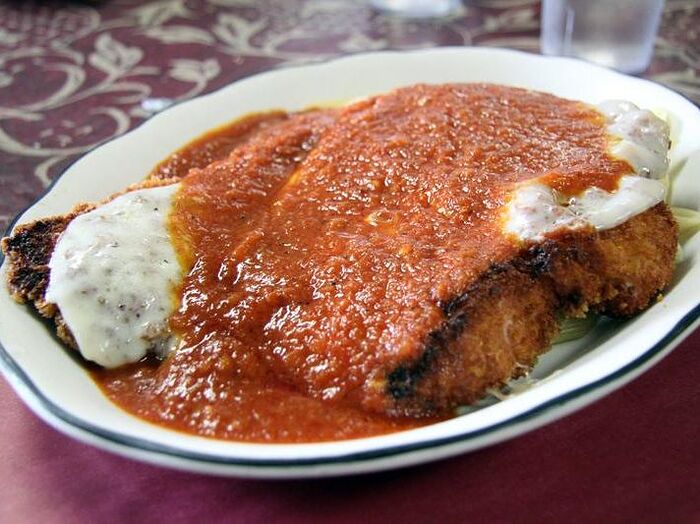 I am fascinated that such organizations still exist and, apparently, thrive. In my youth, I viewed them entirely through the lens of ancient sitcoms like The Honeymooners (The Racoon Lodge!) and The Flintstones (The Loyal Order of Water Buffalo), and associated them exclusively with men older than my parents who mostly wanted to drink, hoot at strippers, and go fishing /bowling w/o their wives. The only ones I actually knew of that existed were the VFW (again, largely old guys, drinking), The Moose Lodge (same, without the war talk to use as a fig leaf) and The Shriners, who, so far as I could tell, didn’t do anything but wear fezzes and drive tiny cars in Chicago parades. The Knights of Columbus was known, but they were tied into the Catholic church, so my little Jewish self knew nothing of it besides its name.

Certainly, none of them was known for FOOD, in any capacity.

‘Fraternal’ just brings to mind college and Greek culture, which during my day (last half of the 80’s) might as well have consisted entirely of Everclear and sexual assault. It was not my thing.

I’ll try to find a good link and send you, and anyone else whose interested a pm, as its mostly not on topic, except maybe one of our current initiatives.

Oops! That was supposed to be a PM.

I’ve never really understood what these organizations actually do.

They all have their pet philanthropies, and most are very serious about doing good. Mine has college scholarships, “meals-on-wheels” type deliveries to the infirm and housebound, animal rescue fundraisers, and donations to special needs children’s camps. It also works with other similar groups to support local festivals, specialty food cookoffs and other gatherings.

This is not to say that drinking doesn’t feature prominently. Gambling, too. But all of that, plus the bar and food operations, are the primary sources of revenue for the good works. Our “chapter”'s (about 750 members) budget is large enough to surprise many people and provide for regular live entertainment…

You missed mentioning the Elks, American Legion, Eagles, and several others. I believe most are alive and well. Most also offer reciprocity at hundreds of “chapters” nationwide.