Any news on Sola reopening?

Some news from the Atabula site, it said that Sola has reopened in Dec 2017, but with a new chef, Kousuke Nabeta from Maison du Saké. Hiroki Yoshitake, the ex chef left Paris and will open his own restaurant in Fukuoka, Japan. The concept of Sola will change, a saké bar on the ground floor, and the gastronomy restaurant underground. Also the restaurant will now serve only 20+ clients (instead of 46 in the past).

Thanks for the update. It’s too bad that the old “Sola” won’t be coming back; we had an exquisite meal there two years ago. But with Alliance, Montée, L’Arcane, and others we haven’t tried yet, we have plenty to look forward to.

If you try it, I’ll be glad to know what you think.

Please note that Passage 53 is renamed as la Table du 53, sous chef Hideki Nakamura will become head chef, the restaurant will simplify the cooking and become cheaper too! Lunch price 38€ for 2 course, 48€ for 3 course.

While Chef Shinichi Sato will open a new concept restaurant in the coming months. 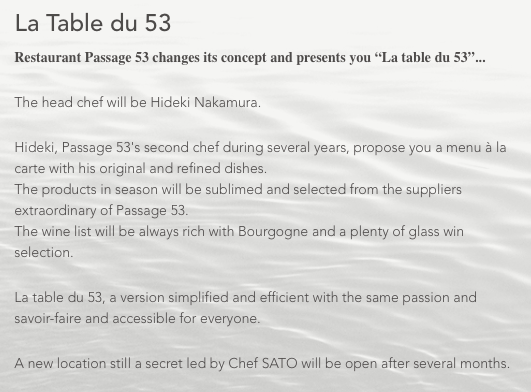 Thanks for the update!

Just saw it today and was surprised. Few months ago, wanted to see if they had a cheaper lunch, but everything was over 120€ or more.

I’m certainly happy if I don’t have to pay too much for good quality.

More on this here.

Problems filing tables are some of the 2 or 3 stars ‘zombie’ places. Stephanie la Quellec’s 2 stars restaurant is killed, 3 weeks after promotions to 2nd star.

That was my point. Many people don’t have to think twice about going out for a meal that costs some €50. When you’re talking about €300-400 or even more, people start to think.

Given the fact, you don’t eat alone. LOL!

A message for fans of Yam Tcha and Adeline Grattard.

"I know Yam Tcha won’t last forever. I put a lot of energy into it, and if the team goes away, I’d want to close it because we’re a family. I also think someday I won’t want to cook. When I run out of energy, my dream is to operate a hotel. " / The chef Adeline Grattard (Yam’Tcha restaurant in Paris) on stage at Omnivore Food Festival on March 12th. " -

I guess you are planning your annual Parisian trip in autumn?

I guess you are planning your annual Parisian trip in autumn?