I am just kind of anxious to get this board started. We went back to Fortina last night - we hadn’t been in a while and had been a bit worried that they might be spreading themselves to thin opening 3 places. I have to say, I am continually impressed with the level of dedication of their staff - their great attitude and customer first attitude comes right from the top down. After a while I kind of relax into the noise level and it becomes part of the fun. Oh, and then there’s the pizza - still great,not to mention the succulent wood fired bone marrow!

Fortina is baking some of the best pizza int he area. They also have a shop in Rye, NY and they are opening in Stamford in the next few weeks. The LB is one of the best combos I have ever tasted.

Their third restaurant is opening in Stamford 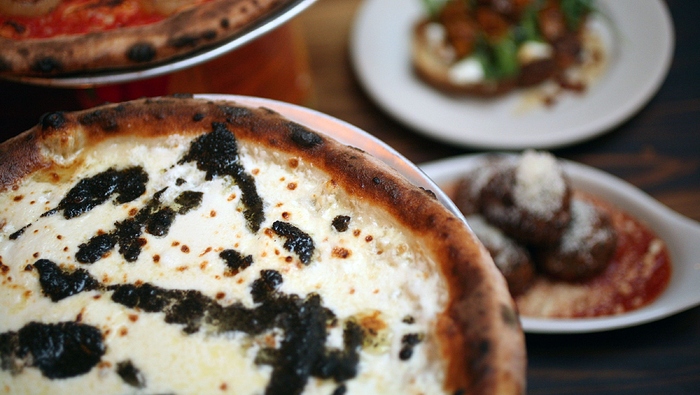 Fortina Stamford is ready to open

The Fortina crew is ready to open a third restaurant in Stamford's Harbor Point development this weekend.

I’m wondering… where exactly in Armonk is Fortina located? I won’t be eating there since I now live in England, but I knew Armonk very, very well years ago. My then husband was a doctor there for years. I often think back to that town and all the people I knew there.

I’m not sure how long ago you left but they built a beautiful new shopping area behind Main Street with an entrance on Maple. They have a great supermarket and Fortina is on Maple.

Thanks - I know just where you mean… near Wampus Pond. I guess I wouldn’t recognize the
town these days. Lots of my friends have moved, and we lived in Chappaqua back in those days.

Well, Chappaqua has not changed much!! But Armonk sure has grown, but its still really pretty.

Probably the only thing that’s changed in Chappaqua is the tax rates. So many people have had to move now that they’re retired. I guess I’d be among that crowd if my life hadn’t changed.

My partner in CTbites.com visited with The Boys for a walkthrough the other day. It looks fantastic. Grazie a Dio. The long wait (and drive to Westchester) is over.   Fortina  is ready to rock in Stamford’s  Harbor Point.   Luigi Bianco Pizza, welcome to Connecticut! Expecting to begin serving any day (as soon as...

To the questions where it is located Armonk. Take 684 to the route 22 exits. Go west one light and make a right.The road will swing to the left in about a half-mile and Fortina is located about 100 yards ahead on the left.

The guys are going it again. They are opening another location in Yonkers that will have outdoor ovens.

Rumor has it, the guys are also eyeing Brooklyn.

The route of restaurant expansion is usually outward — from the city to the subs, so this audacious move would be against the grain. I know Peter Kelly once considered opening in the city, but the deal fell through, and with a bit of relief on his part. He feared being the country mouse served up to the insular city critics. Will be velly interesting to see how Fortina pizza will fare in Di Fara land.

Well, Brooklyn is more than DiFara, as far as pizza goes… But DiFara is probably the only pizza I would go there for