Just to set the record straight:

Both Eater SF and Hoodline, in articles about Z&Y’s upcoming new venue across the street, are re[porting that President Obama once stopped at Z&Y for takeout. This has become an urban myth. Obama did NOT stop at Z&Y for takeout. He went into Great Eastern next door and ordered dim sum to go. His car was parked in front of Z&Y and several photos showed him in front of Z&Y when he was returning to his car. Z&Y plastered some of the pictures on their front window, creating the false impression that O had stopped there.

As Herb Caen once commented, nostalgia ain’t what it used to be, but I still cherish these 2012 photos of Obama at Great Eastern, especially #6, which depicts some Chinatown ayi grab-ass action. 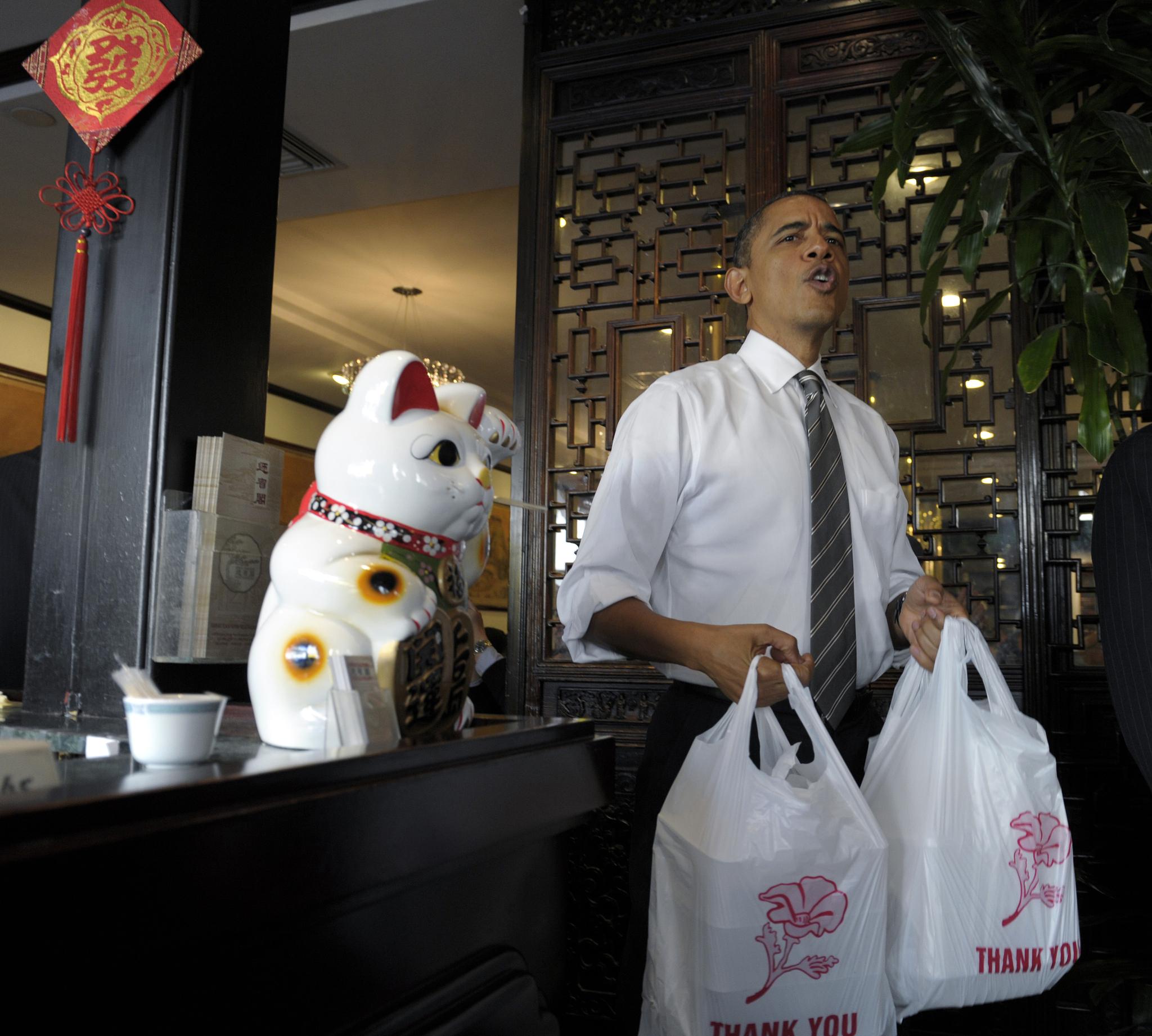 Haha! #6 is great! Thanks for sharing.

In other words what you are saying is; “Fake News”!!! lol (sorry)

He went into Great Eastern next door

Yep. His photos are still on the Great Eastern window. Not sure… where the Z&Y news came from. 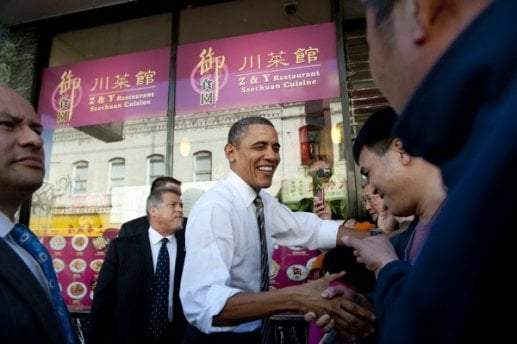 Who remembers Bill Clinton at The Slanted Door?

Which Asian eatery would Trump’s motorcade stop at? Jollibee??

I think so.
I think Trump will like whichever Asian eatery has the closet resemblance to McDonald. Jollibee is up there.

Oh, for the days when our leaders knew what dim sum is…

Yep. His photos are still on the Great Eastern window. Not sure… where the Z&Y news came from.

It’s easy to get misled by the photo, and Z&Y deserves credit for perpetuating the myth that Obama ate at Z&Y. A few years ago, my Facebook (Adsense) ads included one that said “Try SF’s best Chinese cuisine from Chef Han, who has served Barack Obama!”. Z&Y’s current Facebook page shows a photo of Obama outside Z&Y in 2012 and implies a connection by saying, “Chef Han has served several Chinese and US presidents!” The Obama photo on their current webpage is labeled, “President Obama visits Z & Y Chinese Restaurant”.

The Wall Street Journal recently perpetuated the claim that Obama ate food from Z&Y in SF Chinatown. In addition to the Hoodline and Eater SF articles mentioned by @souperman, Michael Bauer made the same unsubstantiated claim in 2015.

I have no doubt Chef Han would make a wonderful meal for Obama. But I’ve seen no one evidence he has. No specific US president is listed on Z&Y’s Distinguished Guests page, which mentions several impressive people Chef Han has cooked for either at Z&Y or when he was executive chef in Beijing International Hotel or Consulate General of China in San Francisco.

By the way, I have walked passed Z&Y many times, but I have never eaten there. I am not a huge fan (nor hater) of Szechuan cuisine which is why I have skipped over it in the past. However, is Z&Y a good restaurant on a normal SF Chinatown scale?

Is it spicy Sichuan dishes that you don’t gravitate toward, or other aspects of the cuisine?

I think you’d be able to carve out a nice meal of non-spicy food. I stay clear of the Cantonese or Chinese American leaning dishes—- Their chow mein is the only one I had and it wasn’t very good. Anyone else have experience with the non-Sichuan dishes here?

For non spicy stuff, sichuan or otherwise, they do good versions of a beef roll, smoked duck, bitter melon with honey, and pea sprouts (not a wide variety of seasonal greens IIRC). I would avoid the turkey style Chicken (probably refers to the country, it’s basically chicken in Italian dressing) and their Dan Dan noodles, which they no longer make with meat. I’ve been curious about a few Shanghainese items on their menu, but haven’t tried them since Bund Shanghai is across the street.

Their advertising is hilarious. A few years ago they declared themselves as part of Michael Bauer’s top 10 restaurants in San Francisco, when in reality they were included in his ten picks for Chinatown ( they weren’t yet part of his top 100 IIRC). Now, they are declaring chili house, their sister restaurant, Eater’s “best Chinese restaurant in San Francisco.” When you look at the eater article, they are indeed number one—- alphabetically! I actually can eat spicy food. I also eat Szechuan food (spicy or not) from time to time. They are just not my top foods. If I drive by a Szechuan restaurant (by itself), I will likely go in and eat, but if I drive by multiple restaurants then I tend to pick another one.

So you think their Szechuan food is pretty good? Thanks.

I’d say its worth a visit in Chinatown. The good Cantonese in Chinatown are at best at the e.g. R&G level, which is solid. Apples to oranges, but Z&Y are better than many of the average Cantonese places. Chef’s background/ credentials here: http://www.zandyrestaurant.com/m-en/the-chef.html

Can we get the chef to cook some of the fancier stuff he probably cooked at the other places? The Z&Y dishes are pretty good, but surely he must have the goods to deliver at a higher level than Z&Y, if what he said about himself is true. LOL, given what @hyperbowler found about their embellishments above, I wonder if I should be more skeptical.

The kung fu tea performance has me intrigued to visit soon – – I haven’t been there in over a year.

The Z&Y dishes are pretty good, but surely he must have the goods to deliver at a higher level than Z&Y, if what he said about himself is true.

I’ve never read any reports of him making specialty dishes, but would be eager to learn of his specialties as well—- I enjoy their stock Sichuan cooking. Do they have a special menu? There’s a crawfish dish on Their Facebook page that’s not on the menu.

Chili House’s menu is the more dynamic of the two restaurants, but the additions they’ve had since opening have all been from Beijing. I don’t believe Z & Y had updated the menu in several years, so they lack some menu items available at newer Sichuan restaurant that have been popular in LA for years (or Chongqing items like roasted fish).