We visited Orlando for a day this past Saturday. Our flight was delayed twice, then canceled, then uncanceled, and, by the time we arrived at our AirBnB, it was 3:30AM on Saturday morning. Our flight back to Baltimore was at 9:45PM that night, which meant we had to fill the gas tank and be at the car rental return by about 7:45PM. Also, we decided to let the kid rest as much as possible this time, so we didn’t leave in the morning until 11AM. I headed out to the farmers market and some pastry shops in the morning to grab breakfast while the others were still sleeping. We had non-food activities planned this time, but, even with the late start, managed to get a lot done. I’ll start the report tonight.

Wow. Sounds like The Trip From Hell. Waiting to hear how you redeemed it.

I woke a bit early to pick up some goodies and bring them back to our AirBnB for breakfast. First stop was the Winter Park Farmer’s Market. I don’t think it should be called “Farmers’ Market” because I saw just one or two vendors who actually grew their own produce, and one was hydroponics. I sampled some citrus but it wasn’t much better than what’s available at a regular supermarket, and some even had the same stickers. I was in a rush, so I could easily have missed something. I was really hoping to find amazing citrus. A few vendors were advertising Plant City strawberries and I picked up a basket. They were good, but not as good as I was hoping. There was a croissant vendor, too, and later I would learn croissants are very popular in this area. Olde Hearth Bread Company had a stand here and I purchased a few things from them in case we didn’t make it to their shop in East End Market. It must have been an off day because nothing was executed very well: cookies were OK, ciabatta was oddly shaped and too dense, and pretzel had no characteristic pretzel flavor 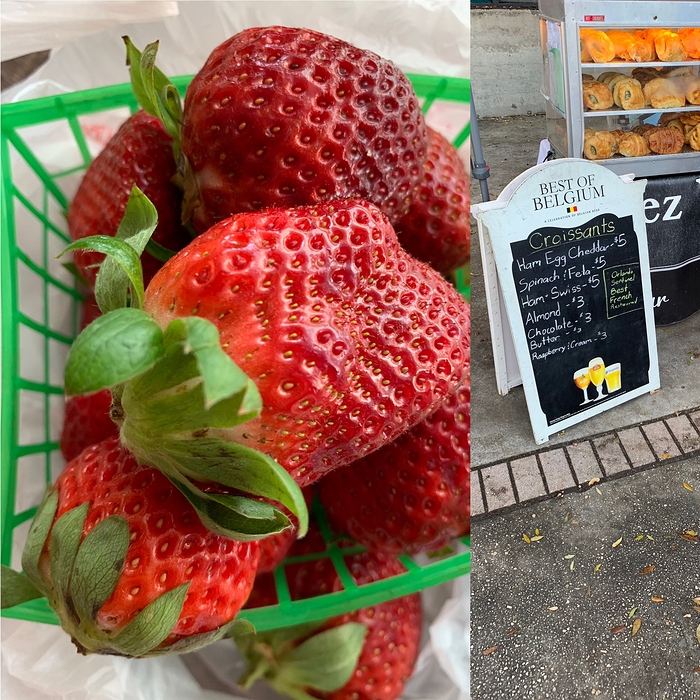 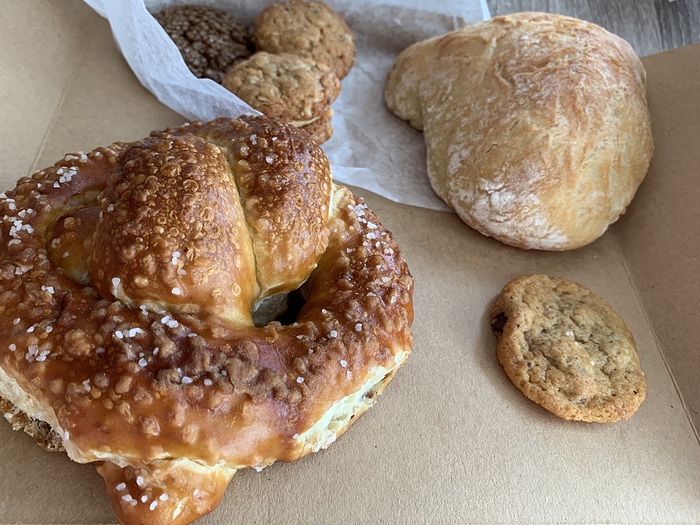 Next, I stopped by The Glass Knife. I was really looking forward to this place. They had quite an assortment of doughnuts, but I went simple with the glazed. I also picked up a Chocolate Big Wheel. Service was great, they happily answered all my questions with no issues. You could even watch them assembling pastries in a side room. Their decor was outstanding. The doughnut was light, the dough had well-developed flavor, and it didn’t feel greasy, but it had a shortening mouthfeel to it. I had been craving doughnuts all week, so I finished it, but the rest of the gang avoided it. The fillings and flavors of the other varieties would have masked the shortening. I haven’t seen this style of doughnut executed better (sometimes it’s referred to as Southern-style.) Conversely, the Chocolate Big Wheel was advertised as having marshmallow-flavored filling, but I couldn’t taste any marshmallow flavor. However, the others said it didn’t matter because it had such great chocolate flavor. 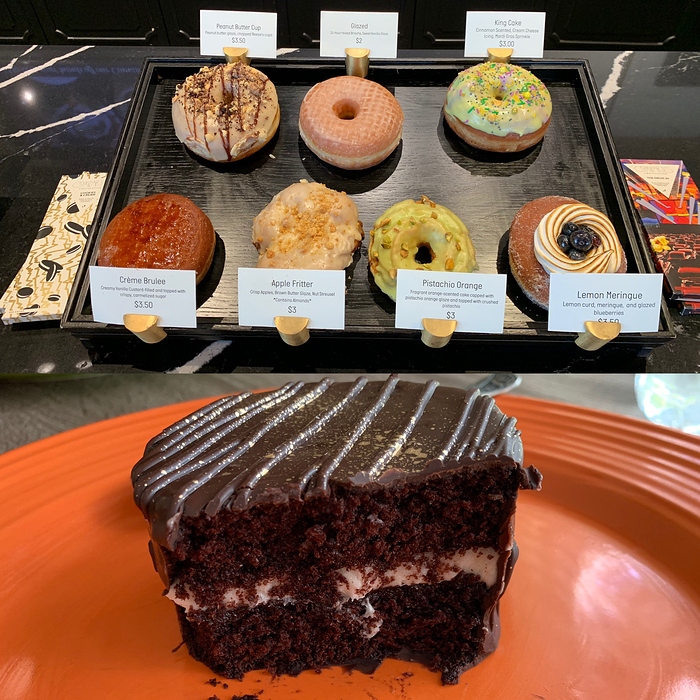 I made a quick stop at Trader Joe’s. Other than organic strawberries, they didn’t have any local produce (sometimes TJ’s will have local “opportunity buys”). Ironically, they were sampling Heirloom Navel Oranges from California. I quickly perused the bakery section. This section is where Trader Joe’s from different regions differ the most. I grabbed some water and milk and headed out.

Lastly, I visited the croissant specialists at Buttermilk Bakery. (Believe or not, nearby is another croissant shop named Croissant Gourmet, but I didn’t have time to stop by.) The line was out the door, and the workers tried hard to be patient as I decided on my croissants: Matcha Almond Croissant, Banoffee Cruffin (banana custard filling on the inside), and Fresh Raspberry and cream cheese Danish, all made with croissant dough. The pastries are expensive, but also very rich. Sort of like French technique meets Southern sensibilities. The matcha almond filling was a bit too sweet – I like some bitterness from the matcha to come through – and the banana custard in the cruffin might have had flavoring added. Still, they were executed very well. We couldn’t finish the fresh fruit one until the next day and it was still good (probably the best of the three.) By shaping the same dough differently, the three pastries actually felt distinct. 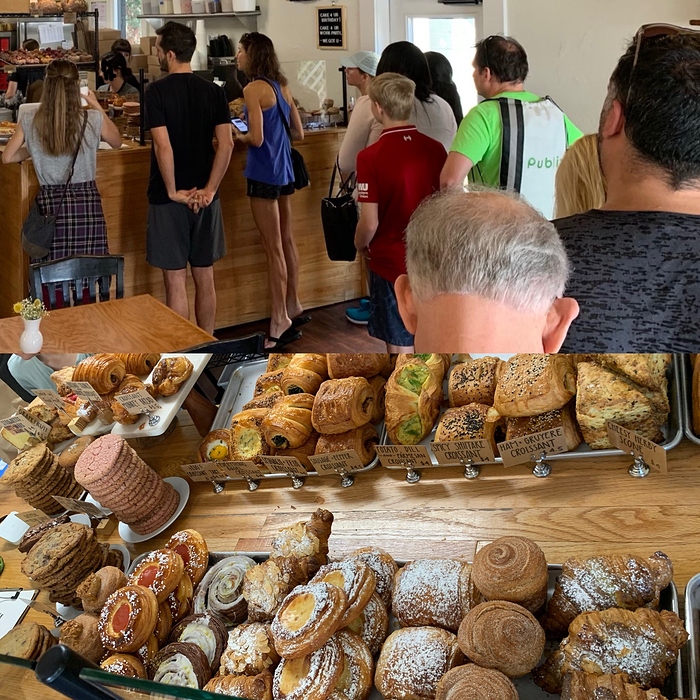 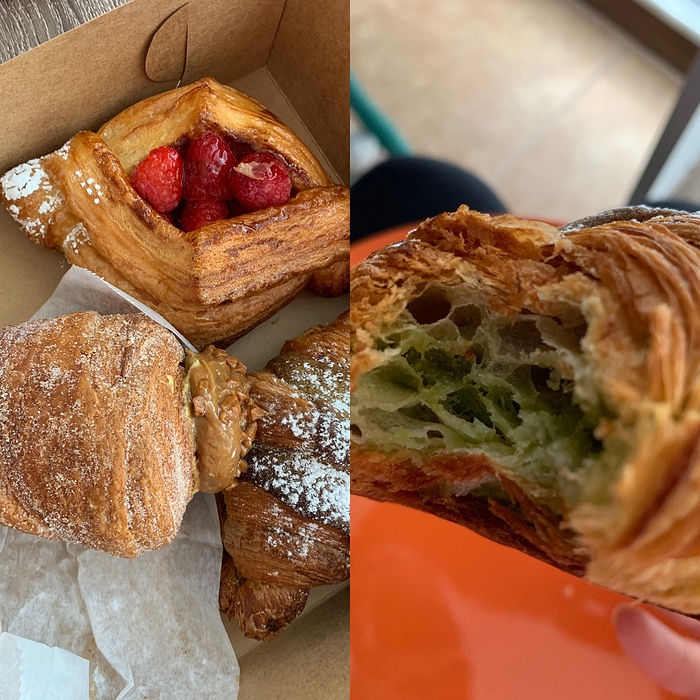 We quickly packed up and headed out.

citrus but it wasn’t much better than what’s available at a regular supermarket,

Traditionally most of the commercial citrus grown in Florida were juicing varieties. A tremendous number of commercial growers have sold off their land as the population has expanded into what were rural areas. Couple that with over 15 million backyard citrus trees destroyed since '95 due to the states efforts to eradicate citrus canker and there just isn’t much variety for fruit to eat out of hand. Over 20 years later people are still heart broken at having the government come in and raze their back yard trees.

On the way to Black Hammock Airboat Rides, we stopped by Thirst Tea. I’d never been to a shop like this before. They had sweetened teas, unsweetened teas, lemonades, and infused water. You could sample each one. The teas were flavored with dried fruit. The honeydew-infused water was too refreshing to pass up and we got a large size to go. The infused water lasted us the whole length of the airboat ride. 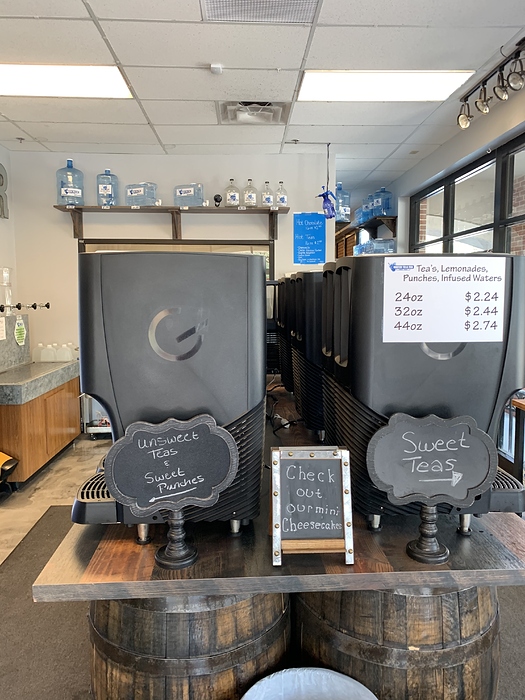 By the time we reached Black Hammock, the morning humidity had disappeared giving way to perfect weather. They even let you hold a baby alligator after the airboat ride is over! 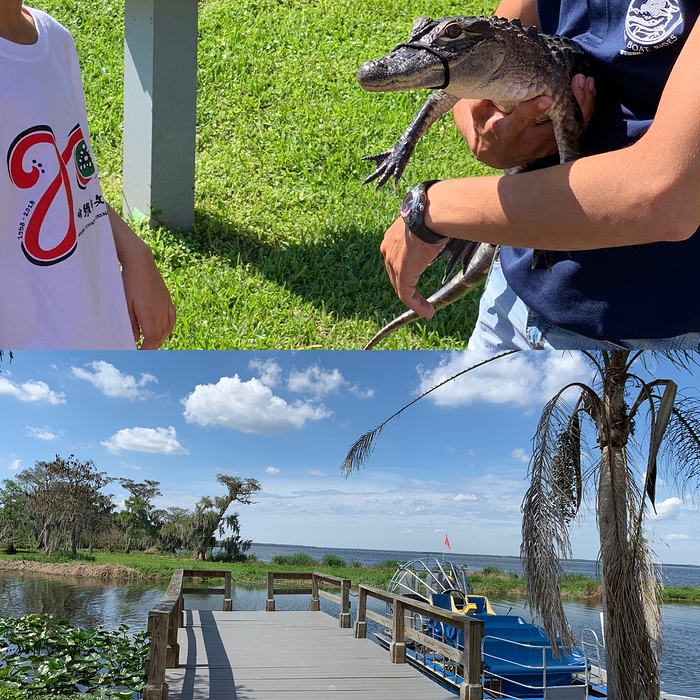