The new owners of Fiesta have opened their first refurbished store, revealing the direction they’ll be taking the chain. I’ve always found Fiesta to be a fun shopping experience; the two closest to me are mediocre and I seldom go but I frequently go to the big Bellaire/Hillcroft store and the one on S. Main @ Kirby. I have been concerned what the new owners would do so I went over to check it out. Plus, I like exploring new grocery stores.

I had been to this store twice in the past and liked it. Tho much smaller it was more like the Bellaire/Hillcroft store than the S. Main store, with several places to eat inside, as I recall.

As I drove up the first thing I noticed was the somewhat muted colors of the Fiesta logo. The parking lot has been completely resurfaced and all the shopping carts are new. I neglected to really look at the colors inside but my impression is that they are somewhat muted, too.

Just inside the door is La Comida Fiesta, a steam table eatery (I think the only tables and chairs are outside where there is also a tin-roofed stand that looks like it has barbecue smokers in it - it wasn’t in operation). Some of the food looked good. i remember about 15-20 years ago, all the Fiestas, including even the smallest one near me, had such a steam table operation but they pulled them all out and brought in fast food stands (mostly, Church’s Fried Chicken that I’ve seen). I’m glad to see the steam table return. In front of the steam table section is a display of bakery items which was actually rather small. I don’t remember seeing any other bakery display throughout the store so that’s a bit of a disappointment.

The produce department is probably a little larger but looks a lot larger; in fact the whole store, though it actually hasn’t been enlarged, feels much more spacious. I saw a couple of items in the produce section that I don’t think I’ve ever seen before but can’t remember the names and everything in the produce department looked good. That’s one of the main reasons I don’t shop at the Fiestas near me - variable and often poor quality produce. Towards the back of the produce section is a stand where there is a lady stripping cactus leaves and bagging up the stripped paddles or cutting them into strips. I’ve only seen that before at the Bellaire/Hillcroft store. That stand also included some store prepared takeaway items including entrees, sides, and tortas, plus some brand name items and lots of juices.

The meat department is large and impressive. Meats are displayed as they are in a caniceria, stacked up against the glass of the front of the display case instead of splayed out on a sloping shelf. There was a well stocked seafood department; I got some Jeri’s oysters (shucked - haven’t tried them yet).

I do enjoy exploring new grocery stores and I enjoyed the visit very much; the staff was all very friendly. I won’t be driving all the way over there to do my shopping, but I am greatly relieved about the new ownership. Of course, that Bellaire/Hillcroft store is iconic and they better be careful with that one

It’s been announced that the larger/better of the two stores near me, on S. Fondren @ W. Bellfort, will be expanding. They’re taking over the space next door. I presume, though it hasn’t be explicitly stated so far as I know, that this will also entail refurbishing the whole store and bringing it inline with the new look and features. If so, I’ll probably be shopping there a lot more in the future.

Didn’t realize Fiesta has been sold.

I shop at the pretty good sized store at Westheimer and Dairy Ashford. It’s one of my seven or eight "usual"grocery stops!

I don’t know if you remember radio host Alvin Van Black. He always said the one must take place for out of town visitors was the Fiesta at Bellaire and Hillcroft, especially people from the north.

That Fiesta used to be a Globe, think K Mart. I grew up within walking distance and worked at the Loew’s drive in theater across the street, cooking in the snack bar.

Oh I remember Globe. I shopped at that store and the one at Gulfgate. Whenever I came to town from college in the 60s I went there for records - you know, those round, black, plastic-thingies with a hole in the middle that had music on 'em? I’ve still got one I bought there ca. 1963 with the Globe price sticker. Globe made K Mart look classy - or wait, was it the other way around? Man that was a long time ago.

BTW to all - sorry about the link in the original post. When I put that up, it was to a version of the story that wasn’t behind a pay wall. If anybody can’t get past the paywall, there are other articles online about the new store.

But yes, the new owners are going to be watched very carefully when they tackle the Hillcroft store.

I remember Globe but no Drive-In Theater in that area, closest was on South Main at the curve, the McClendon Triple. That was the 1970s.

Lambsy, you had me for a moment as I thought I misremembered two years of my life.

Holy cow, how could I have not known of this? Moved to SW area in 72. Licensed to drive in 75. Now I’m questioning my disremembrance. Other than McClendon, the only other drive in was Red Bluff in Pasadena, and I never went there, only the guys did, for reasons you can assume. Yikes! I’m running this past my high school crowd!

We preferred The Triple because they had better movies. The only time Loew’s had first run in my tenure was after the 1971 Academy Awards with Patton and MASH. This pegs me at 15 years old multi-tasking out my rear.

The place was completely sold out. We had all four cafeteria style lanes open for the only time in my career and brought back the who’s who of ex Loew’s teenage boys to help out.

Utterly off-topic, but the only drive-in I remember was the Airline, (I think) at Airline and I-45. A trip to the drive-in usually entailed a trip to the nearby Monterrey House first.

Love those candies in the bottom of the chip basket. Late-60’s for me. I was just a little kid the last time I was at a drive-in though.

We had better places to make out by the time I was driving.

Moving right along, another refurbished store. This is the store on S. Main at S. Post Oak, not the one near NRG. I’ve been in both; they are/were very similar, very large stores, much larger than the Wayside store.

The illustrations behind the signs on the exterior make them hard to read.

Saw this at the Westheimer/Dairy Ashford store a couple of years ago: 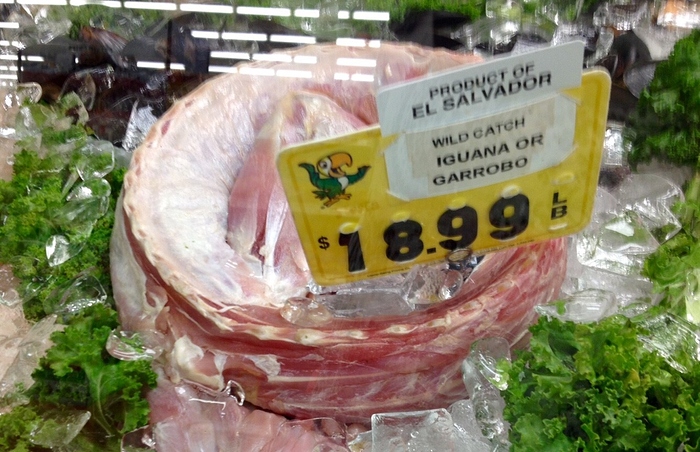 Of course I know by now you have worked up a recipe for Iguana Guisado, no?

But was this in the seafood section? According to the WikiThingie, Garrodo is a fish.

Of course I know by now you have worked up a recipe for Iguana Guisado, no?

But was this in the seafood section? According to the WikiThingie, Garrodo is a fish.

Of course I didn’t buy it. I’m way too cheap to pay $20/lb for something that “tastes like chicken”. HAHA!

Yeah, seafood department. “Garrobo” with a “b” is “iguana” apparently.