I love my sandwiches. I mean, I love “My” sandwiches. “My” Smoked Chicken Salad, “My” Italian Sausage, “My” Corned Beef, etc. are legendary in my own mind. But sometimes, you just have to eat out and a good sandwich can be a great, reliable and consistent option.

I have several favorites around town, to whit:

First and foremost, a Corned Beef or Pastrami from Kenny & Ziggy’s. As I’ve noted before both on Chowhound and here, I love K&Z’s for its unique and mountainous sandwiches. My faves come on two slices of rye and that’s it. Russian dressing is available on request and deli style mustard is on the table. A side of potato salad or cole slaw comes with. I love the potato salad. It’s rich and slightly sweet and so so so good. To be honest, I usually split a sandwich with a buddy and have a cup of chicken soup. It ain’t a cheap lunch by any means, but in my opinion, it’s worth every cent. I saw that they are also expanding to the West U area and eventually to Austin.

For a cheaper and much quicker lunch, (proximity!), I’ll often stop into Buffalo Grille at Woodway and Voss for a Grilled Chicken Club. The usual club sandwich, bacon, lettuce, mayo, but instead of ham and turkey, (or whatever), you get a grilled chicken breast. Usually perfectly cooked, it’s a great light lunch. (Light for me, anyway; I don’t know what YOU eat!)

The Union Kitchen on Memorial between Beltway 8 and Gessner serves an Ahi Tuna Steak Sandwich that is outstanding. Cooked to order of course. As they describe it: “Grilled tuna steak, roasted jalapeño, English cucumber, beefsteak tomato, sweet chili sauce, wasabi mayo, & fresh cilantro on a jalapeño cheddar bun”. You know what it tastes like to me? A really great Spicy Tuna Roll at my favorite sushi restaurant. I want one right now.

I’ve mentioned Mexico’s Deli on here before, but I would be remiss not to mention their three dozen or so varieties of tortas on a sandwich thread. The Munchkin and I have been eating there since they opened and he and I would often split a torta, (usually the Lomita Argentino), and have a bowl of their fantastic cream of poblano soup; (are you seeing a trend here?) I’ve had a lot of their different sandwiches over the years and they’re really good. And enough for two growing boys, obviously!

I’ll give you one more to make it an even handful. At Roegel’s BBQ on Voss, you can have a pulled pork, sausage, turkey or sliced brisket sandwich served on a bun. OR you can be like me, and order a half pound of sliced brisket and request four slices of bread and have four nice foldovers with a small snack left over for later. I don’t know why, but BBQ tastes better with a slice of white bread wrapped around it. Their sandwiches are fine, their buns are fresh and perfectly acceptable. But I’d rather have a foldover every single time. It’s a personal thing and you just wouldn’t understand.

Unless you do. We should have a secret handshake or something.

So, what are your favorites?

Here is a list of cheap lunch sandwiches from Houstonia.

I just had a soft shelled crab po-boy at BB’s Cafe.

It’s their featured po-boy of the month, (or something), and it was pretty darned good. It was dressed with lettuce, tomato, pickles and remoulade.

My top two favorite sandwiches in Houston are the Ahi Tuna Steak Sandwich at Union Kitchen and the Gulf Shrimp and Texas Blue Crab at the original location of Local Foods in The Village. It would be impossible for me to rank one ahead of the other, I think.

I’m going to try to steer my senior’s lunch gang back to UK sometime so I can get another one of those. I see the original location of Local Foods still lists the sandwich as made with green goddess dressing but the newer locations show it’s made with ranch dressing. I’m going for the GG version and hope the recipe hasn’t been changed - I just don’t need another opportunity to work ranch dressing into my diet!

I mentioned somewhere, maybe on Chowhound, the Tampa/Ybor City style Cubano at the Cuban Cafe in Baytown (with a slice of salami) and how it was the best Cubano I’d ever had. That’s way far over there and I’ve only had it twice but I’ve also like the Pork Cuban at Amazon Grill, which doesn’t strive for tradition, and I could list that as one of my favorite sandwiches. I’ve seen Cubanos on numerous menus around town of places that aren’t Cuban, too. I’m a little leery but I’m going to take a chance on some of these.

I’ve had the migas at Manena’s, best I’ve had of any of the Argentinan places in town. I can see how they can be addictive but I don’t think I could list them as a big favorite. That’s one of the things I want to get back to Andes for although from the menu, it doesn’t look like their version is much like the traditional versions.

Another sandwich I’d love to find a good version of is a New Orleans style roast beef po-boy with gravy and debris. Best I ever had was at the place originally called Calliope on Jefferson, east of 59 (she didn’t protect the name and lost it to a place out near me so she had to change her name to The Cajun Stop). I went a couple of months ago and didn’t have the roast beef but I thought the food was not as good as I remembered. Anybody got any recs?

I had a pretty darned good roast beef debris poboy at BB’s Cafe a couple of weeks ago.

On Tuesdays, they have a half poboy/cup of gumbo special.

As noted above, this week it was a Soft Shelled Crab poboy.

Several weeks ago it was fried shrimp AND roast beef debris.

No telling how many catfish po-boys there are to be had in Houston, between cajun, soul food, seafood and you-buy-we-fry places, etc. This one near me at Lotus Seafood Market on S. Braeswood is a good one.

Big enough for two and very reasonable. The place was already a mad house before Katherine Shilcutt wrote it up. Parking is inadequate, the lines are long and dining accommodations barely suffice. I always phone in an order and take it home. Unfortunately its a little far for me to walk so I sometimes have to circle the block repeatedly hoping for a parking slot to open.

This is the Texas Blue Crab and Gulf Shrimp sandwich at Local Foods mentioned above. 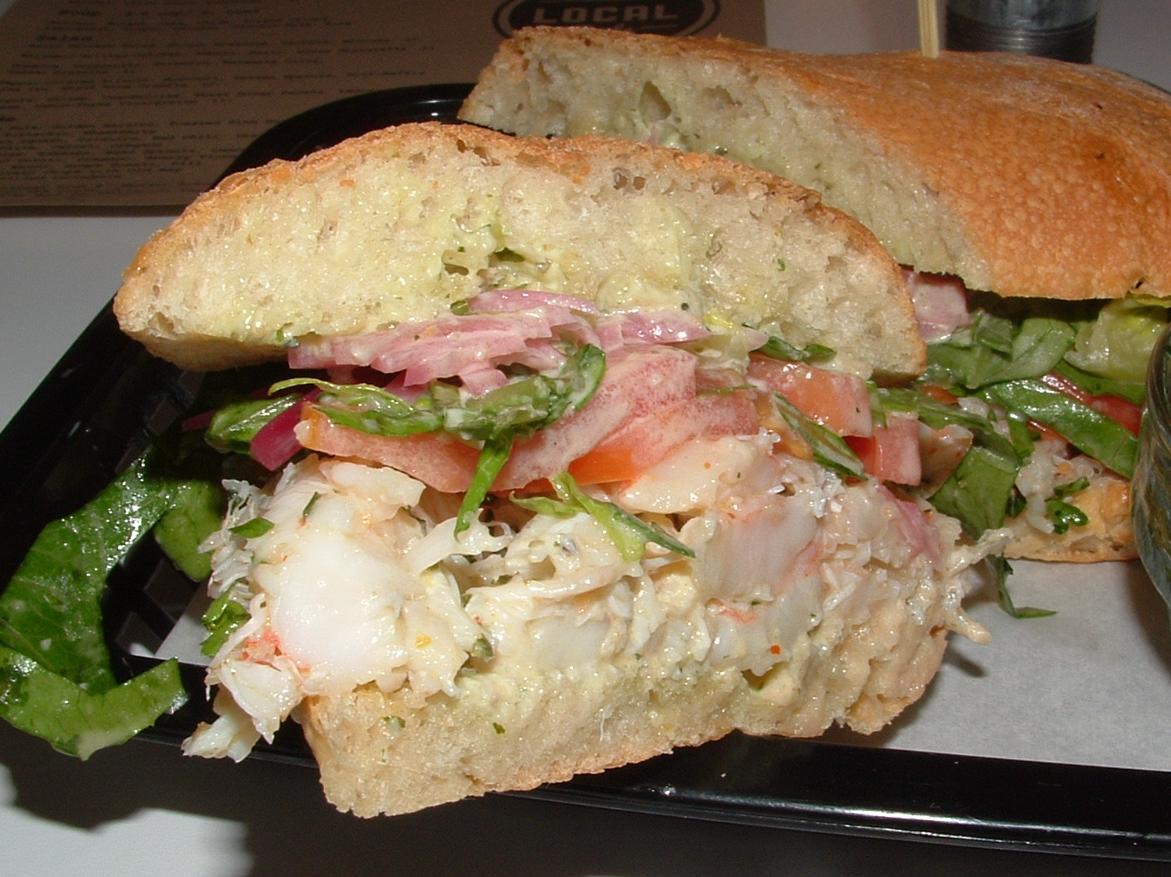 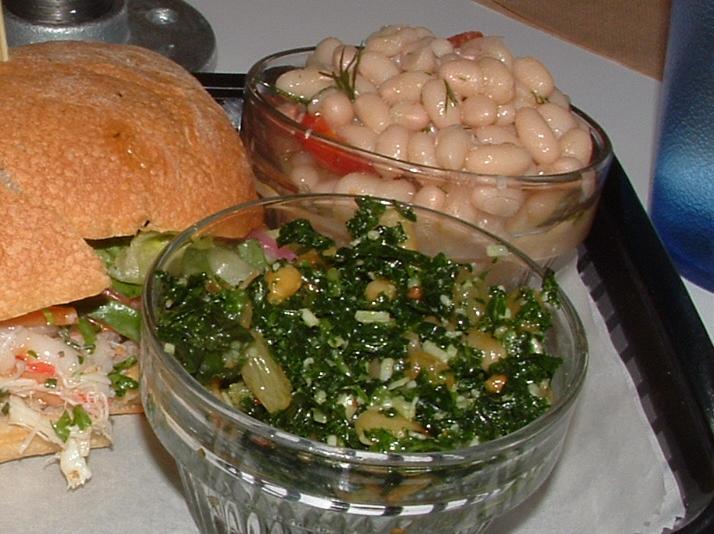 This is the Tampa Bay/Ybor City style Cubano at The Cuban Cafe in Baytown mentioned above. 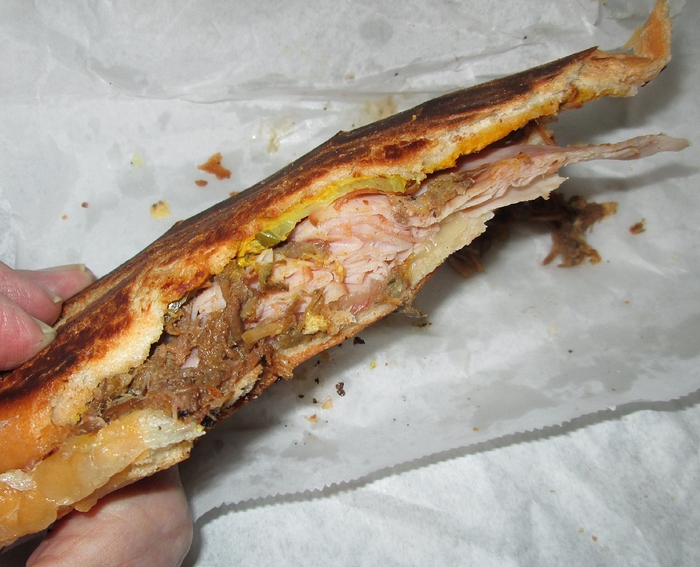 Pulled roast marinated pork, ham, a thin slice of Genoa salami, Swiss cheese, mustard and pickle on a very well toasted Cuban roll, very well pressed, too. I had never had a Cubano in the Tampa Bay/Ybor City style (the salami is supposed to be because Italian immigrants worked alongside Cuban immigrants at the cigar factories) nor one as well toasted and pressed as this one. This was a revelation to me and caused the Cubano to climb dramatically on my list of favorite sandwiches. Unfortunately, there doesn’t seem to be any other place in the area doing the T/Y style Cubanos and it’s a long way over there.

This is the non-traditional take on a Cubano at Cordua’s Amazon Grill. 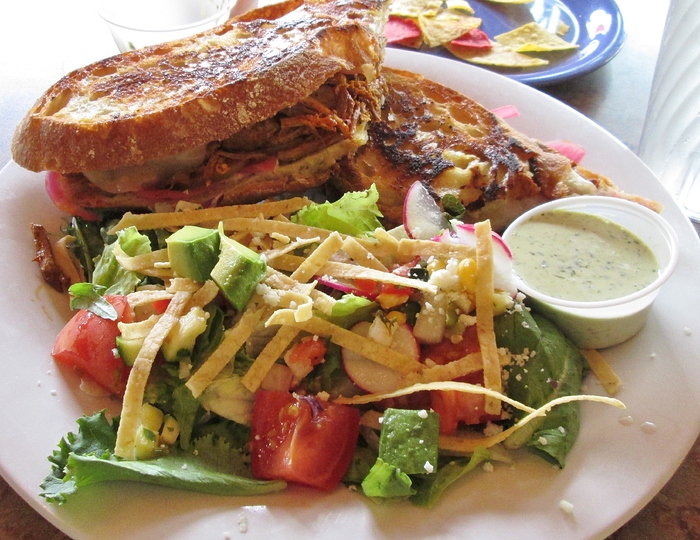 Called the Pork Cubano (they used to offer other meats but the current online menu only lists this one): Coco Cola braised pulled pork, country ham, provolone, smoked mustard and pickle on a crisp (toasted) rustic bread. Comes with a choice of sides and of course the free chips, remnants of which are visible in the background. So far, this is the best thing I’ve had at Amazon. It’s on the menu at at least one other Cordua restaurant - America’s?

Sandwiches are heating up in Houston so to speak and we are moving beyond Jersey Mike’s and Subway.

East Hampton has made a splash in a couple of locations.

I’ll tell you though, I’m excited about this place after hearing about it on a podcast. Apparently actual loop dwellers are packing a bag and lots of water and setting out to travel beyond the hinterlands to Westheimer between Gessner and Fondren just for a pork sandwich. Rhotey Rotisserie even gets the rare 5 stars on Yelp.

Has anyone been? If I’m not mistook, @NotDoobieWah t’aint that far as the crow flies during working hours at least.

A chef on the podcast raved about the Rotisserie Porchetta and now I must have it.

I added to a post on the Deli Man documentary post that I thought was in the Houston forum, but it’s not so, Kenny & Ziggy news, he’s building out the largest deli in the land. 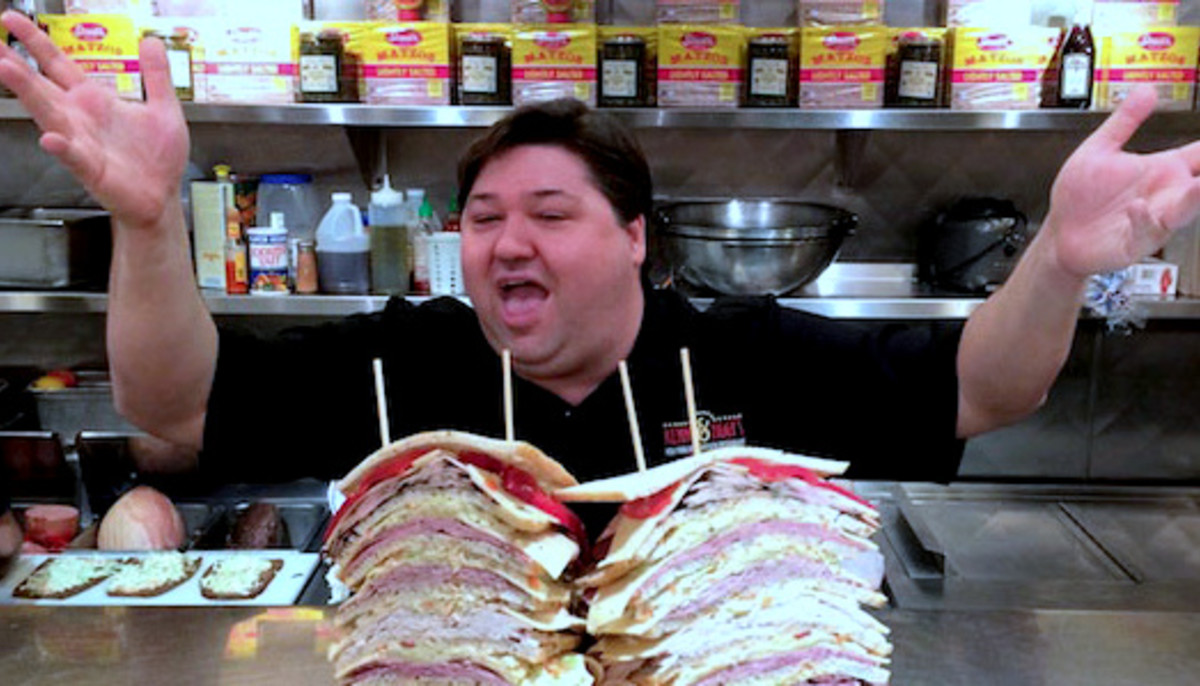 Houston's best deli will have a new home in 2021. Kenny & Ziggy's New York Delicatessen Restaurant announced it will be relocating from its current home at 2327 Post Oak ...

We’re regretting that Houston isn’t on our foreseeable circuit. In our book, making your own pastrami and corned beef is the real deal. Whitefish salad and tongue would have been enough to get us through the door, and they’re on the menu we just saw.

I love reubens. What are some favorites? Larger doesn’t mean better. 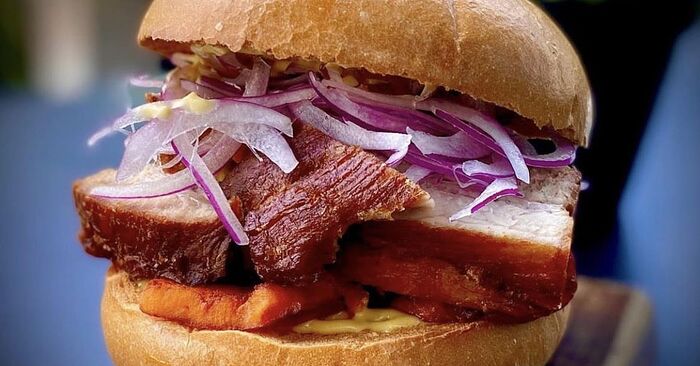 Glad to see Spec’s and Common Bond on the list. I’ve picked up many a sandwich at Spec’s (downtown location only, unfortunately) whilst perusing their liquid refreshments offerings. Good chili/chili pie, too, plus a good place to pick up specialty, hard to find sodas. Common Bond – solid, solid, solid.

The Paulie’s Po’boys on Bellaire in West U was one of the last Antone’s Original shops forced to drop the use of the Antone’s name. I haven’t been to it since the name change but have to Angelo’z on Kirby @ OST, the other orphaned Antone’s, and had a very good muffaletta.

The Fiesta on Fondren @ W. Bellfort carries store baked teleras now, and they’re pretty good. I posted a breakfast torta I made recently in the breakfast thread. Nice not to have to go all the way up to El Bollilo on Airline for telera rolls.

And what have you guys been up to lately? @Lambowner - that rotisserie place you mentioned up thread didn’t last did it? Has it reopened anywhere?

@NotDoobieWah - been to the new Ziggy’s yet? Comments, reviews? 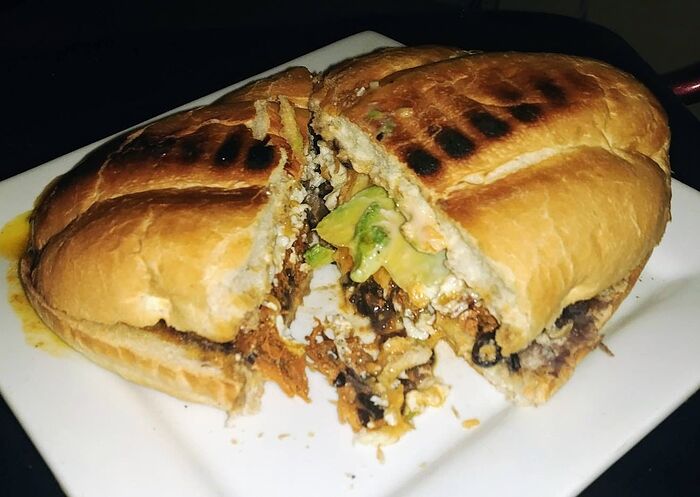 Wow, you hosting the next brunch? Outstanding.