Is cheese without dairy still allowed to be called “cheese”?

Oh glorious cheese, my raison d’être! The best food in.the.world! There’s nothing above it. Absolutely nothing! 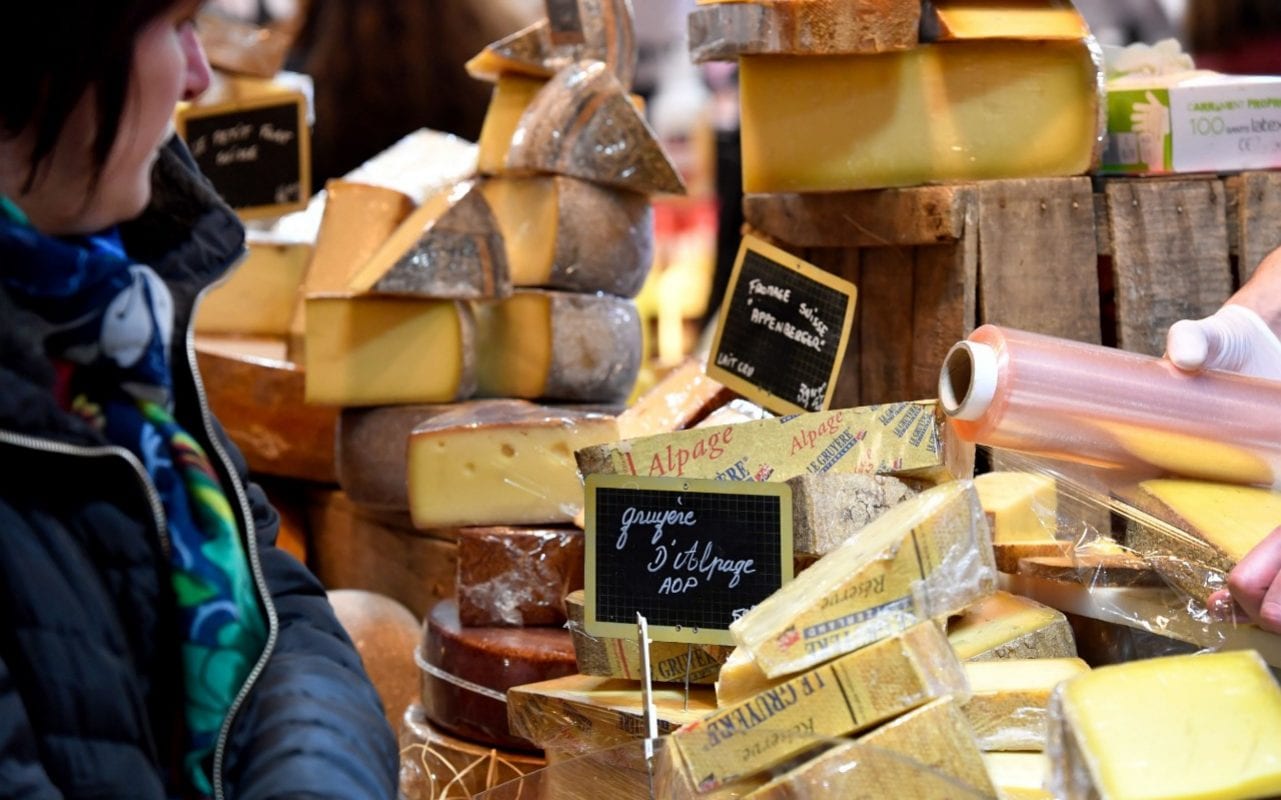 The dairy industry is taking action against the first vegan cheese monger, arguing that calling plant-based products “cheese” is “misleading”.

Is cheese without dairy still allowed to be called “cheese”

Presumably - at least in the UK. That said, I have absolutely no idea what is the British legal definition of cheese. Or even if there is one.

There are dishes we eat that are completely plant based and we enjoy eating them. Until its success (and consequent relocation to the city), there was a vegan restaurant in our borough. It wasnt there long and we only went once. All they offered was a tasting menu which we completely enjoyed. Until we got to the cheese course. It was the only course where you could say they were trying to replicate an omnivore dish. And it was just vile. There were three “cheeses”, none of them the slightest bit enjoyable. It wasnt that this was a just a failed replication of cheese but the flavours and textures were just horrible. I presume that, as there were three “cheeses”, those flavours and textures are probably inherent in the general making of vegan cheese.

Quoting the first paragraph from wiki:

Cheese is a dairy product derived from milk that is produced in a wide range of flavors, textures, and forms by coagulation of the milk protein casein.It comprises proteins and fat from milk, usually the milk of cows, buffalo, goats, or sheep.

What they sell isn’t cheese. Full stop. If the dairy industry has their way the word would have to be changed. Something like “imitation cheese”, “cheese substitute”, non-dairy “cheese” etc. The word cheese in quotes, too.

Harters, I won’t knock it until I try it. I often hear this “cheese” tastes vile, your experience must have been deeply unpleasant.

I dreamt about drinking non-alcoholic beer and barfing afterwards. Got a bunch to try and thought most tasted awful, save for one. If I could have a taste of non-dairy “cheese” in the shop I would make my assessment but don’t think I’d want to pay full price for a chunk and then throw it out.

If the dairy industry has their way the word would have to be changed.

Within the EU, at least, there may well be something in this European Court of Justice ruling: 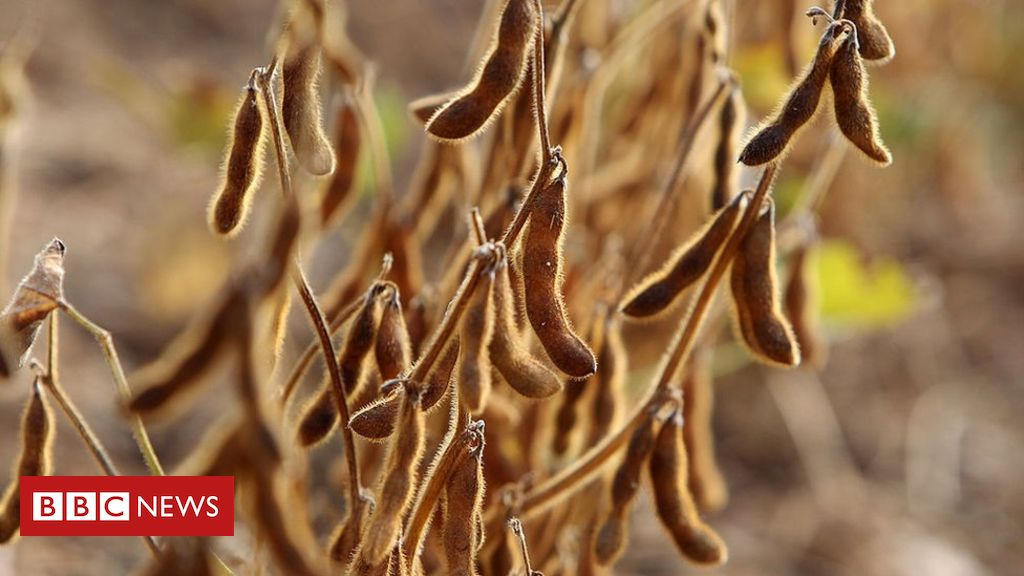 European Court of Justice rules names like milk and butter cannot be used to describe soya and tofu.

And don’t get me wrong about our experience with the vegan “cheese” (made from nuts). This was way beyond simply not liking the flavour of a proper dairy cheese. The three we tried were made from nuts (which Wikip indicates is usually the case) - in themselves, the texture and taste was unpleasant, as well as being nothing like cheese. You really need to search one out to try - maybe one day when an alternative to self-flagellation is called for.

What they sell isn’t cheese. Full stop. If the dairy industry has their way the word would have to be changed. Something like “imitation cheese”, “cheese substitute”, non-dairy “cheese” etc. The word cheese in quotes, too.

I was in LA a few months ago and wandered into a place selling Butter Coffee (no quotes, no ingredient preceding butter) to learn about what kind of cultural appropriation they were up to. Turns out they were a vegan paleo place, and were using almond milk for everything, not consistently labeled, which is an allergy lawsuit waiting to happen.

Vegan cheese has historically been an industrial product closer to plastic than anything edible, but there are a few companies now that use cultures and actual cheese techniques to make a decent product. Miyoko’s cultured butter (well, not “cheese”

is barely distinguishable in taste from dairy butter.

is barely distinguishable in taste from dairy butter.

Mtyoko’s is quite good! I was traveling with a vegan friend (GF too) a few years ago. We had stopped at a food coop and she found several “dairy” products that she had read good reviews on. I was able to try the variety she purchased. A few of the “cheese” could have passed for the real thing, a few were tasty but did not read as “cheese”, one as pretty bad. This niche has had some good development in recent years and there are some producers who are putting out good products!

Now the wording gets complicated. I’m fine with the word cheese, just make it clear that it’s non-dairy. What about fruit butter and fruit cheeses?

My partner switched to soya butter many years ago. It’s easier to eat at work (does not need time to soften). I think it tastes fine.

Thanks, Harters, for the link to that story. I read BBC news (and listen to BBC4 radio) every day but somehow I missed this. Interesting that they made some exceptions.

“There are some exceptions. Coconut milk is allowed, for example, as are peanut butter, almond milk and ice cream. However, soya and tofu are not exempted.”

I shall check out the “cheeses” at a plant-based food shop this weekend.

This one says “pasteurized prepared cheese product”. There’s a milk bottle on the packaging but I can’t see if it contains any dairy at all. 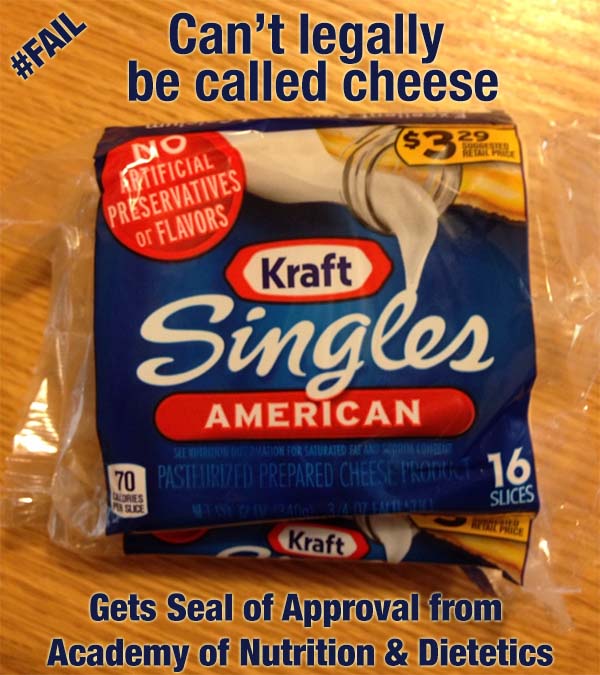 The word cheese is nowhere to be seen. It’s truly an imitation “cheese” product. 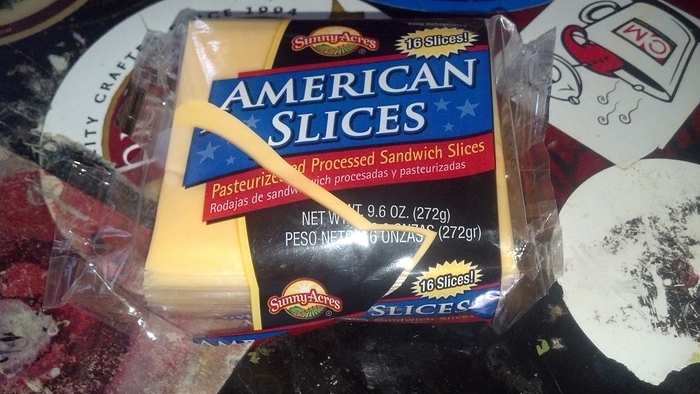 The dairy people are just mad because everyone calls almond milk and coconut milk and such “milk” and- well, they’re getting their asses kicked watching sales nosedive.
And no vegan cheeses aren’t “cheese” but then again edamame hummus isn’t “hummus” and nobody’s freaking out over that

I’m lactose intolerant/all dairy hates me and have tried waaaayyy too many really bad totally horrible vegan cheeses.
But! there are finally some that are quite good. Dr Cow makes aged nut based cheeses that my omni friends have eaten off the cheeseboard before the nearby dairy cheeses. They’re expensive enough it’s a rare treat for me and i buy most often to bring to a friends gathering. 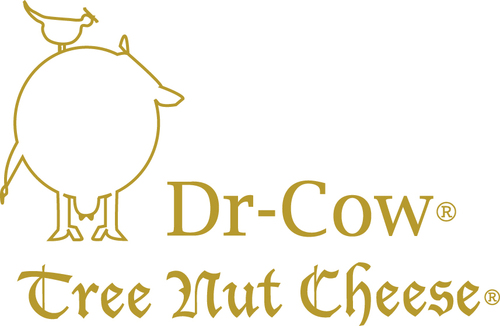 
Miyokos makes great softer cheeses and cream cheese. (And their cultured butter is AMAZING)
Treeline and Kite Hill make good soft cheeses and ricotta. Chao is great for when you need something melty but not great to eat as is, same goes for Daiya. Homemade cashew cheeses , more like a soft spreadable cheese, can be really good- or grainy and gross.
Vegan cheeses are a very long way from being commonly available and even further away from developing the techniques to create the variety of flavors and textures that dairy cheeses have
2 Likes
seamunky February 19, 2019, 11:12pm #10

Miyoko’s soon might not be allowed to call their products cheese and butter either. The same issue has been brought up as the Dairy Pride Act in the U.S. 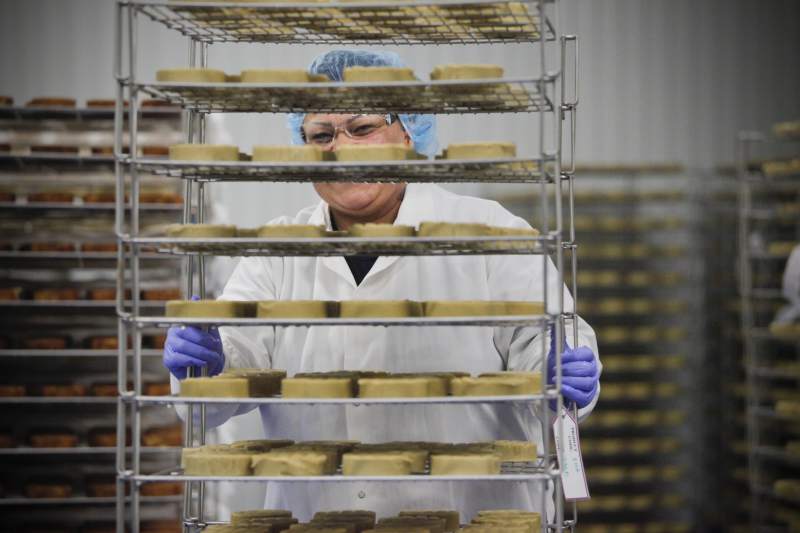 North Bay companies are caught up in the national discussion about what to call non-animal-based dairy products.

The FDA was soliciting comments on the issue but the deadline has just passed. 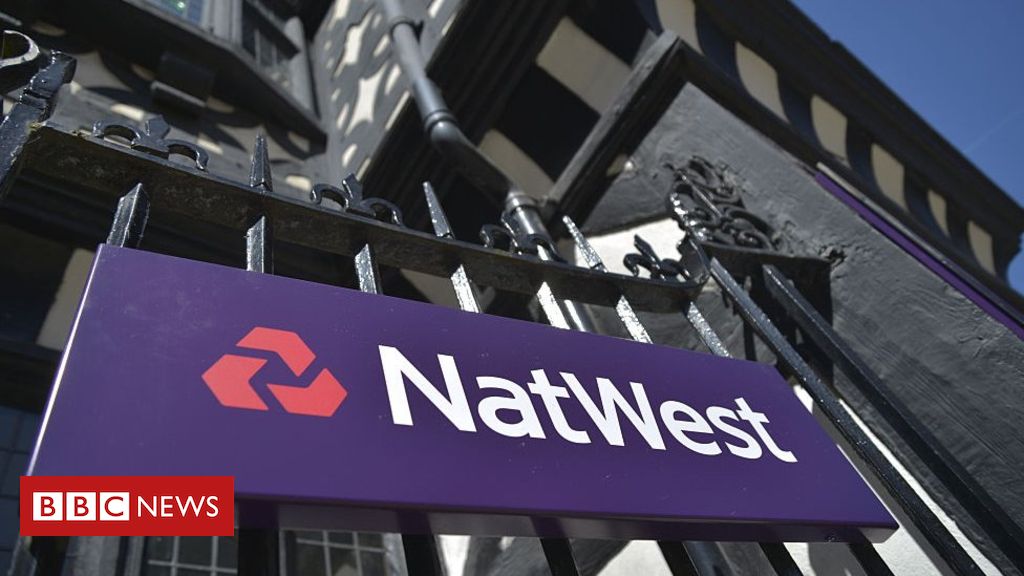 A NatWest worker said he felt vegans were forcing their beliefs on him but the bank apologised for his outburst.

I don’t need to punch anybody, just don’t call it cheese! (Or ice cream, etc)

My inner 12 year old was laughing hysterically at this 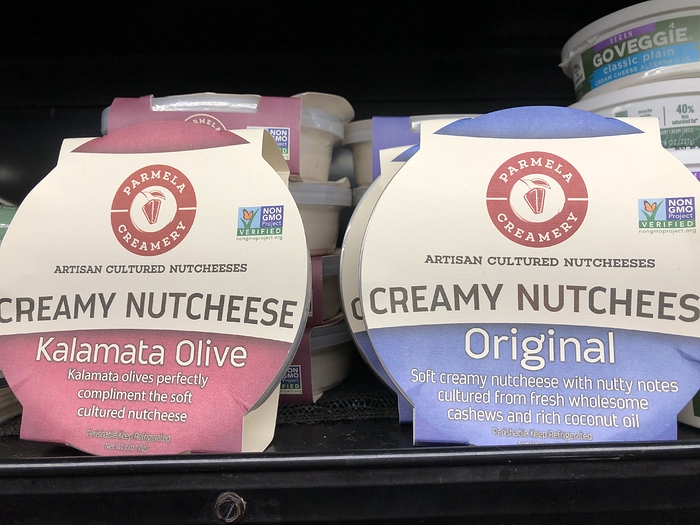 Stephen Colbert did a segment on this. Your inner 12-year-old should start watching at 2:41.

Omfg!!! That is freaking hysterical!! I have a stitch i my side from laughing so hard!
Thanks for that

This is a nacho cheese-like dip. It’s okay, but I presented it as cashew dip, not cheese dip, otherwise the family gets upset when I misrepresent things like that. 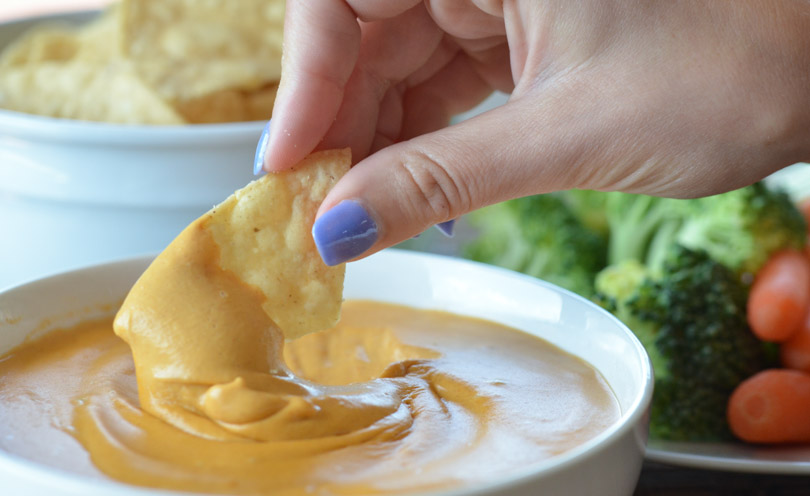 This 5-ingredient queso is a hall of fame recipe. So unbelievably, irresistibly delicious. And if there's a recipe that will have you fall in love with Life is NOYOKE or fantastic vegan food or your Vitamix, it's this!

This is a nacho cheese-like dip. It’s okay, but I presented it as cashew dip, not cheese dip, otherwise the family gets upset when I misrepresent things like that.

Given that original recipe queso is made with Velveeta it’s not a real cheese dip either. I haven’t had the cashew/almond version but I don’t doubt that it’s an improvement.

From the linked article:
"

Pasteurized process cheese food is a variation of process cheese that may have dry milk, whey solids, or anhydrous milkfat added, which reduces the amount of cheese in the finished product. It must contain at least 51% of the cheese ingredient by weight, have a moisture content less than 44%, and have at least 23% milkfat.

Pasteurized process cheese spread is a variation on cheese food that may contain a sweetener and a stabilizing agent, such as the polysaccharide xanthan gum or the Irish moss colloid carrageenan, to prevent separation of the ingredients. The cheese must be spreadable at 70

Imitation cheese is made from vegetable oil; it is less expensive, but also has less flavor and doesn’t melt well.

The “cashew fiesta dip” from trader joe’s is similar, but really good! I had read a review saying it was 100xs better warmed up and after trying myself room temp and warm they were right. Good stuff if you’re not inspired to make your own. And label says it has chilis but it’s surprisingly not spicy