I don’t know Eureka. If there isn’t anything in Eureka, Arcata is nearby. hopefully with the student population there may be more interesting choices.

But then again, is food really the attraction around there?

Ha, you are right, we’re going for hiking, so I’m trying to avoid foods for college student sized stomachs, which will put me to sleep before we hit nature! In the college town spirit, Wildflower Cafe and Lost Coast Cafe look like decent vegetarian food.

Other possibilities are a Caribbean place, a Taste of Bim and Brick and Fire Bistro, which has Cal – Italian

Take this with a grain of salt, as it’s been a long time since my last trip to Eureka, but here’s what I’ve dug up from my notes:

I really can’t offer feedback on any of them, but then I tend not to prioritize meals when that far north in the Redwoods as it’s pretty slim pickin’s. If memory serves, we stayed at the Eagle House Victorian Inn and Abigail’s, and I seem to recall there was an old pub with good atmosphere and passable food in the lobby of one of them.

Edit: I just Googled Samoa and I remember it being surprisingly good! I think we chose it for the history and setting but ended up having a really good casual dinner. It’s on the northern edge of the peninsula across the Eureka channel; a short drive from downtown.

Moonstone Grill north of Arcata right on the water, glorious at sunset, very popular with locals. Probably should try to reserve.

Hard to find. Exit at Westhaven Drive if going north on 101. Use google maps.

Whoops, not open for lunch, but maybe on your way back?

Oh, I was thinking about something other than hiking in Humboldt county, but I guess you can combine it with hiking:

Anyway, I am butting out of the thread now.

According to Yelp their review rating still holds up. A nice casual CA/Italian place.

But in general, the food in Eureka was by far the worst on the whole trip, from Oakland to Oregon/Washington and back again. We used Hwy 5 going up and 101/1 coming home.

Sorry that I don’t have specific recommendations. Last time I was there was the mid-90’s, and my traveling friend knew someone who owned a bar. We spent most of our time in this lesbian dive bar, and I don’t remember eating solid food. Except the Samoa Cookhouse, which was great.

Thanks for the recommendations and keep them coming-- I have a few more trips planned that will take me through Eureka and Arcata.

We went to the Wildflower Cafe in Arcata this time. Humboldt Hash was good. I liked the smoked paprika on the potato and lentils. They had some good house salsas, red and green, in squirt bottles.

Stop by Dick Taylor craft chocolate if you are a chocolate fan. They are bean to bar, and very good. Fuel for hiking!

Small batch bean to bar craft chocolate makers specializing in single origin two ingredient chocolate. All of our chocolate is made in our factory in California

Since starting this thread, we’ve done four trips from the Bay Area to Del Norte county. We had a couple of mediocre meals not worth mentioning. My favorite stop along the way has been Taste Buds, a vegan cafe in Ukiah.

I really enjoyed the BLT. The tomatoes were juicy yellow heirloom tomatoes, good enough that they could star as their own sandwich, but used here more to complement the “B”. The B were 1/4" slabs of tempeh, marinated in Bragg’s liquid amino, liquid smoke, and Italian seasoning. Nothing like bacon in terms of texture or flavor, but a strong umami flavor that worked beautifully in the sandwich. This is a damn good sandwich.

I tend to avoid steam table food, but everything looked so good I had to try some dishes. A zucchini stir-fry was crisp, not greasy, and seasoned just enough to keep the vegetables as the main flavor. “Stewed soy fish,” with soy pieces draped in seaweed as the skin, had a great texture and a mild flavor of the sea. The black-eyed peas were outstanding, especially since they weren’t cooked with animal products.

Oh yeah, excellent french fries too, better than the ones I got served with burgers or fish elsewhere in Mendocino or Del Norte Counties. I asked if they soaked the fries, and the guy at the counter said they blanched them.

Our meal here was at lunchtime, which may be the better time to go-- a Chowhound post of a meal eaten around closing time wasn’t as positive.

Trinidad Bay Eatery was okay. Chowder was the gluey style, as if designed to not saturate a bread bowl, but flavorful with big chunks of clam and vegetables. Fish sandwich, Alaskan cod with an under-seasoned cabbage and canned pineapple slaw, had too small a piece of fish for the ciabatta bun. But they did a good job cooking the fish. Good thin, skin-on fries. Chopped salad had a good range of veggies.

On our next trips, probably not until next year, I’ve bookmarked places recommended above. Locals have recommended Cafe Brio in Trinidad and Jyun Kang Vegetarian Restaurant in Ukiah, which are also on the agenda.

Thanks for the report! It would be useful to also know the names of the restaurants you didn’t like, as a short summary.

Luckily, we didn’t have any bad meals in this area! Two that were just fine were:

Big Chief in Laytonville would be worth a stop for their good beer selection, outdoor seating, and growlers of kombucha. Food wise, I didn’t think much of the po-boys.

Tandoori Bites in Eureka was as good as neighborhood Indian places in the Bay Area. Dishes ordered as “spicy” we’re lacking both heat and fragrance. I requested mango pickle, which helped.

Bump. Anything new notable between Ukiah and Trinidad? 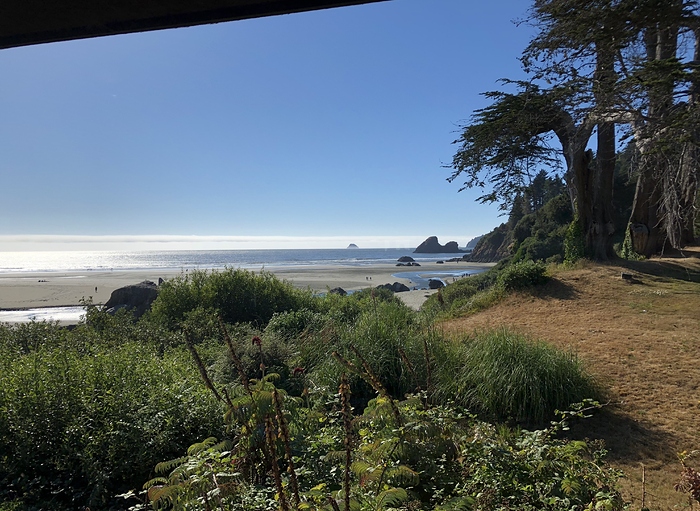 Moonstone Grill north of Arcata right on the water, glorious at sunset, very popular with locals. Probably should try to reserve.

We lucked out in going there the one non-foggy night of the trip!

We went early enough that they let us walk in. Our seats were pretty good and I snuck to the best seat in the house to capture the above photo.

Food and service was good all around. They have lots of wines, two types of Navarro grape juice, and beer in bottles but not on tap. 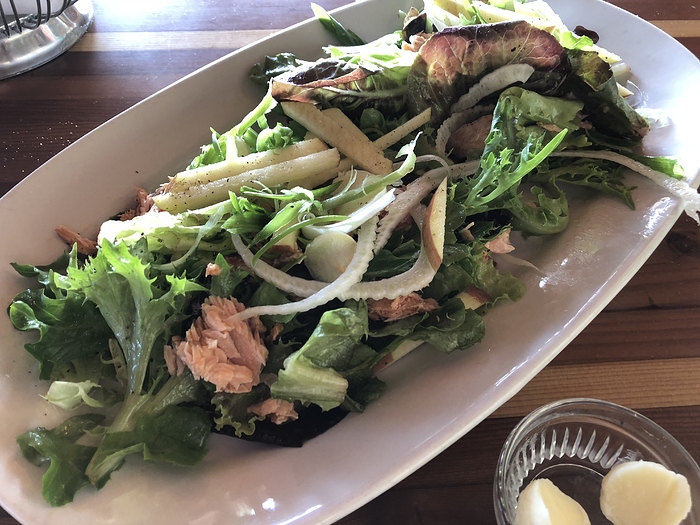 The smoked steelhead salad with shaved fennel and apples, scallions, and a tarragon vinaigrette. This was the most lightly dressed salad we’ve had in our trips north of Eureka, and it perfectly coated the super fresh spring mix. 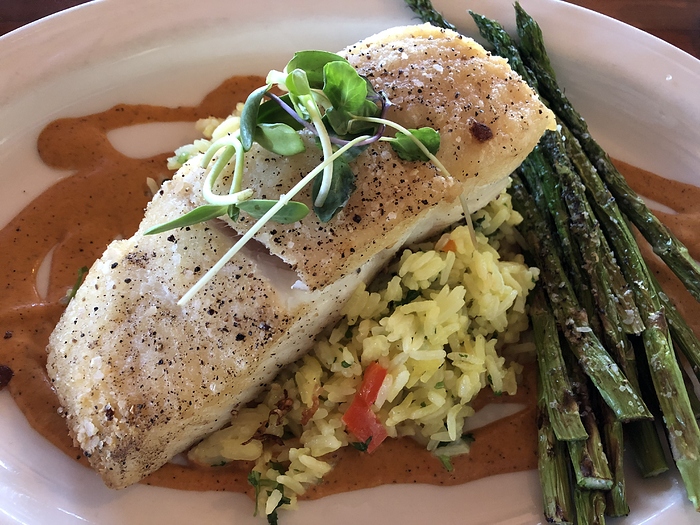 Halibut with a muhammara-like sauce. 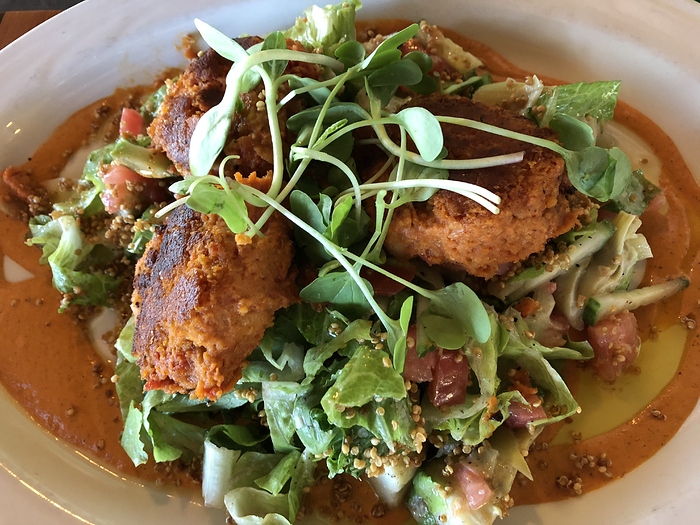 Vegan entree, sundried tomato chickpea cakes on a chopped salad with a red pepper purée, tahini dressing, and crispy quinoa which texturally tied the dish together. 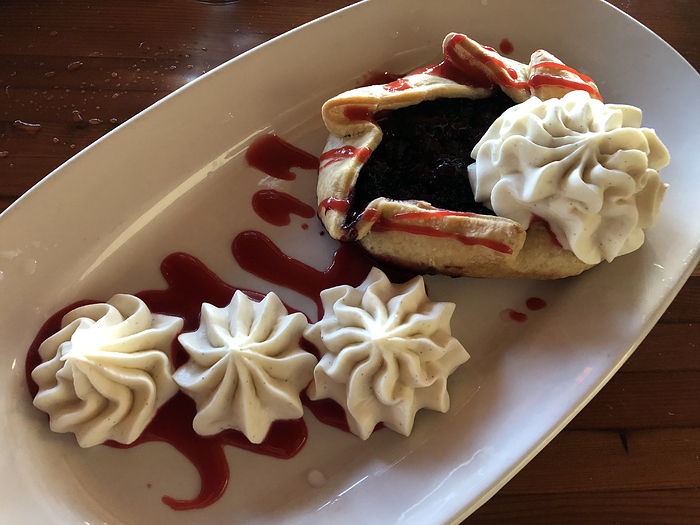 Flaky crust on the blackberry galette with thick vanilla cream. Next time we drive north, I’d be very happy to sit at the bar, eat this galette, and appreciate the views. 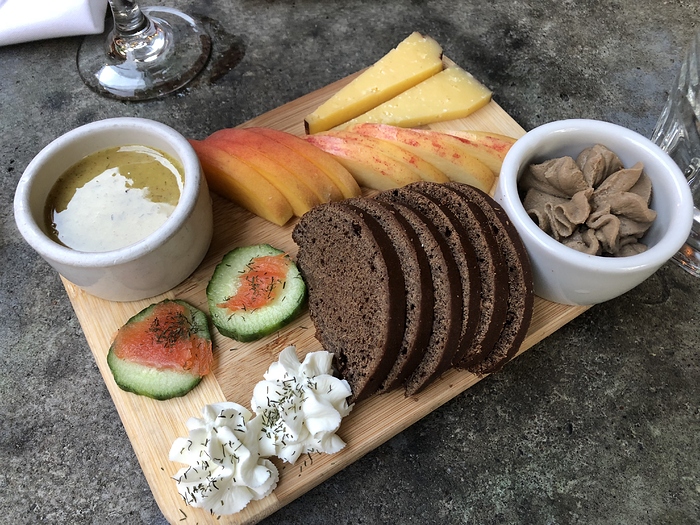 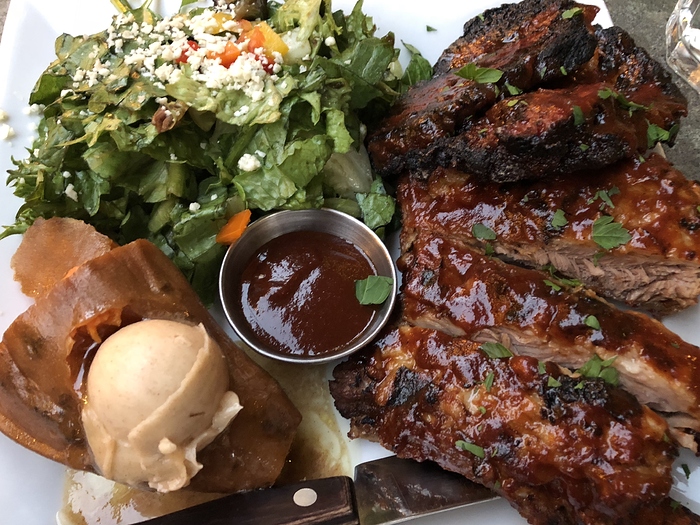 The half and half had ribs and smoked brisket. Sauce overpowered any smoke in the meats. 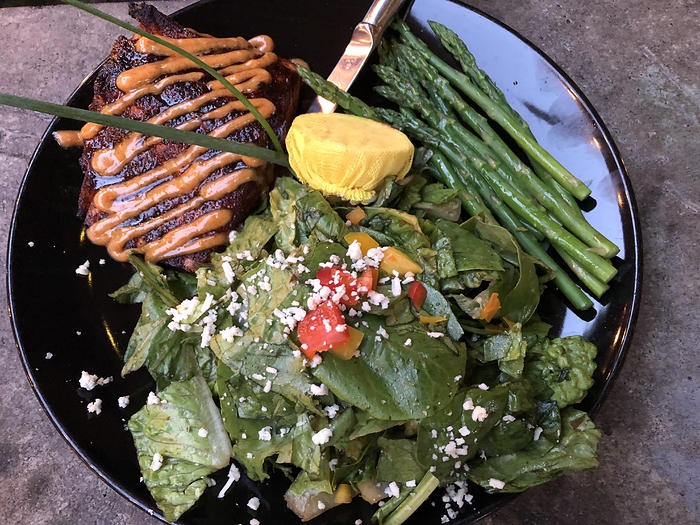 Grilled steelhead was fantastic. Best savory bite of the trip.

Jyun Kang Vegetarian Restaurant is located in Ukiah’s City of 10,000 Buddhas, a 700 acre monastic community site whose highlights include the beautiful, and accurately named, Jewelled Hall of Ten Thousand Buddhas. This is a destination restaurant if there ever was one.

Should you have leftovers (yes!), they request that you bring your own containers. We didn’t because another group ordered the last of the stir-fried seasonal vegetables, and we finished everything else. 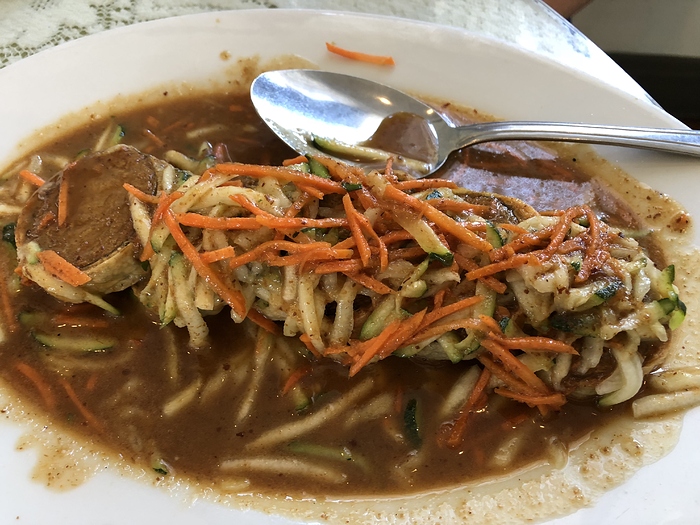 Seaweed Roll, Cucumber, and Carrot with Thai Style Tom Yam Sauce 四六吉祥. One of the best dish I’ve had at a vegan Asian restaurant, the complex and sour Tom Yam sauce redeemed what I grew to loathe as tourist food, along with banana pancakes, in Malaysia. The protein here is vegan fish, a seasoned soy protein patty surrounded by seaweed, giving an oceany taste (Hayward’s Veggie Lee gets theirs from SoCol, perhaps from this company). 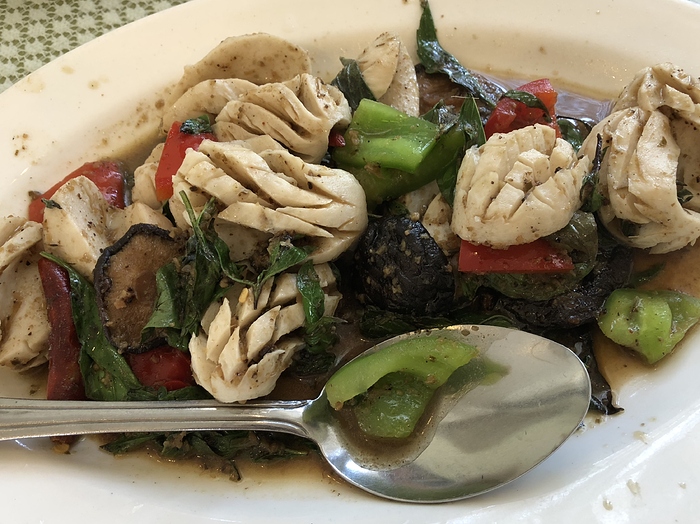 Snow Lily 雪蒟. Another excellent dish, texturally a cross between mushrooms and squid, with a basil sauce. 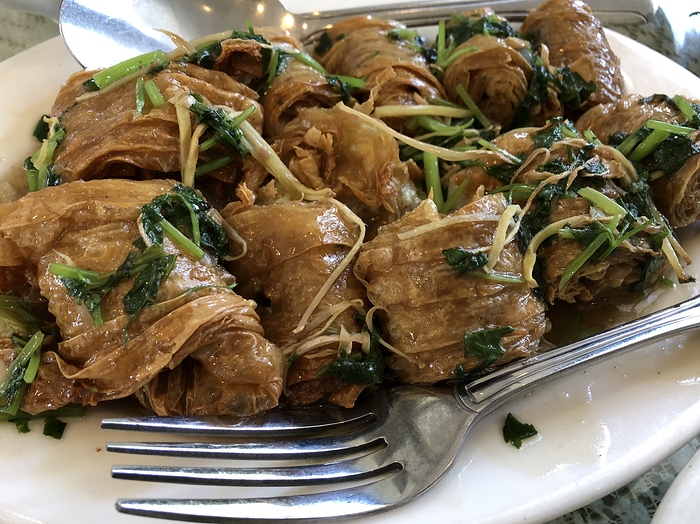 Napa Cabbage with Bean Curd Rolls 琉璃卷.
Rolls of Crispy bean curd skin with a light sauce and cilantro. The cabbage is an accompaniment rather than part of the rolls as far as we could tell.