I haven’t found much current info on Chowhound to use as guidance. I’ll be updating this post as I collect info from Tripadvisor, the internets, etc.

We’re going to try to get to Berbere Tera, the market in Addis where spices are ground (see an interesting article on the transformation of Ethiopian cuisine ). That article makes the case that spices define the diversity of Ethiopian cuisine, but if there are regional dishes we should expect to encounter outside of Addis, let me know so we can be on the lookout for them.

A May Chowhound report has some cool leads:

Does the drought affect any of these places and their food supply?

I don’t have a specific recommendation; however, keep in mind that many restaurants are first and foremost bars.

I was only able to visit Addis and Debre Zeit, and a garrulous fellow passenger in the minivan between the two advised me to say “atkilt bayayent” - or it might’ve been bayayent atkilt - which refers to a vegetarian (fasting) meal. Say that at one of those barstaurants, and you maybe be pleasantly surprised with lentils and beets, among other pulses/vegetables.

Also, if a fellow diner at a restaurant offers to feed you a bite, he/she (fortunately in my case, it was a she) is just being hospitable. Utter “amasakenaloo” (thanks) after and you’ll be set.

You probably saw this already but here may be something interesting: 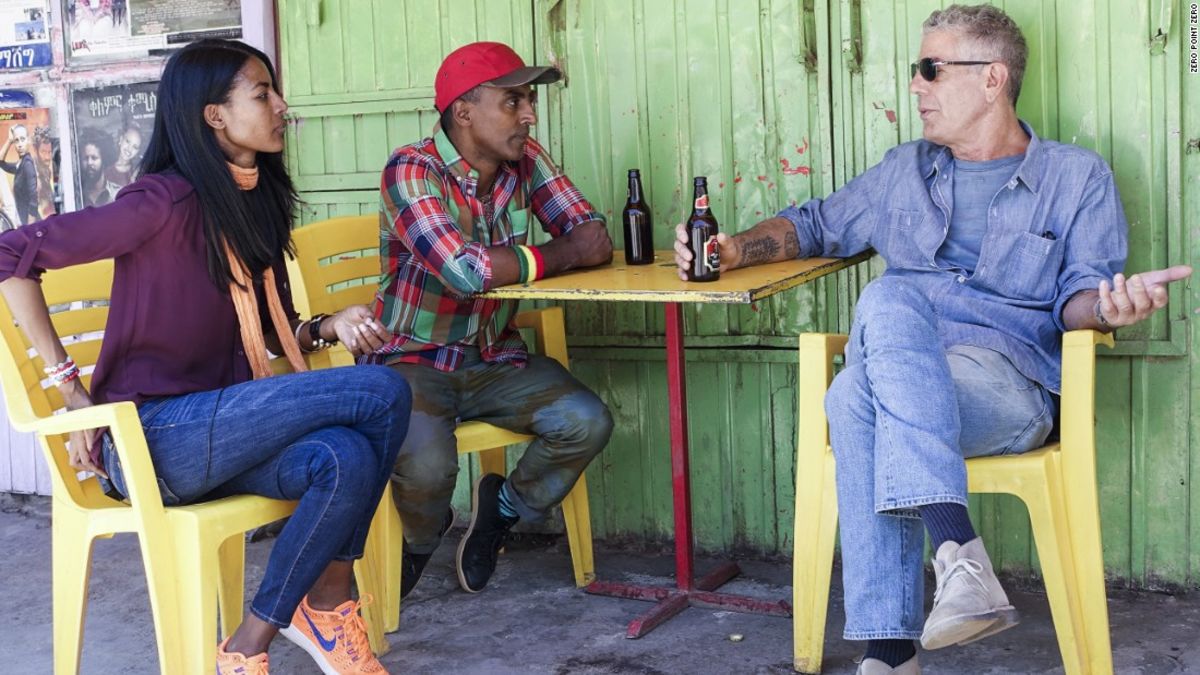 Marcus Samuelsson and his wife, Maya, take Anthony Bourdain back to Ethiopia, to the towns where they were born and share their fascinating stories.

Thanks! We watched it on the plane ride

I’m trying to book a tour with a company that Bourdain used… If I can get a reservation, a report will follow!

Back to the states!

The culinary highlight of our Tanzania trip was a village tour of Mto Wa Mbu (“River of Mosquitos”), near Lake Manyara. The produce is grown in the village and its freshness shined in all the dishes. A simple sauté of pumpkin leaves and minced red onions was my favorite dish in Africa. 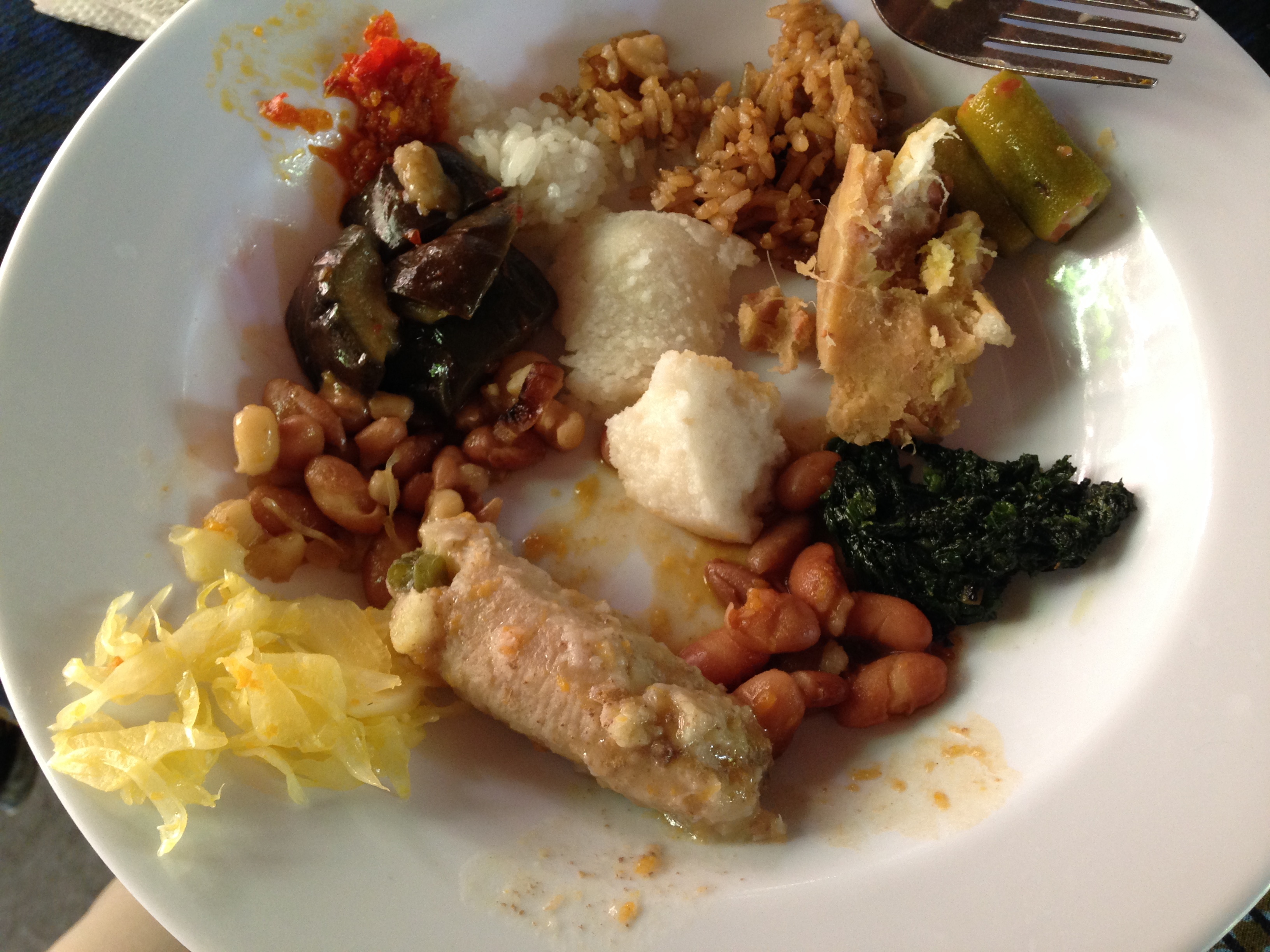 Everything was delicious and other dishes included okra, a pilaf, mashed sweet potato and plantain, a white fine grained polenta meant to scoop up other dishes, beans, eggplant, plantain, and a thick hot sauce. Prior to lunch we tasted locally made banana “beer.” We also picked and tasted a “piri piri” chile against the advice of our guide— it was a super spicy bird’s eye chili!

The best food on our four days of safari was local pineapple, mango, banana, and orange marmalade— other than that, it was boring continental and Indian cuisine. British style sausage and bacon was a cool breakfast treat.

We spent the rest of the trip in Ethiopia, where we had some regional dishes, but mostly dishes familiar to us from Ethiopian
restaurants in the US. The centrally located capital, Addis Ababa was our base, and we traveled to its north and south west.

Doro wot, a chicken stew with one boiled egg per diner, is an iconic Ethiopian dish in the US, but I was told it’s more a holiday dish in Ethiopia. We mainly saw it at restaurants which featured exhaustive menus of traditional dishes.

We never saw mushroom tibs, which is common in the Bay Area.

Oranges were green; pineapples, garlic, and red onions were small; and I never saw a ripe red tomato (roma) being sold. Egg yolks, especially in Omo Valley, were the deep orange of dreams.

And then there’s injera…

We learned a lot about injera, the pancake-like flatbread that’s used both to scoop up food with your hands and to balance the flavor of the food. It’s the foundation of most meals. The best injera we had was sour from 3+ days of fermentation, leavened only with natural yeast, and made from 100% tef, a grain endemic to Ethiopia. Tef comes in light and “black” varieties. The black variety is higher in iron, but stigmatized as unrefined peasant food, kind of like how whole grains were once viewed as undesirable in the US.

Injera made from tef in the US often leaves a sandy residue on your fingers. We never encountered that in Ethiopia and a few Ethiopians had no idea what I was taking about when I mentioned it. A guide told us that sandiness is due to under-fermenting the dough.

Tef is an expensive grain, so a few places in Addis used a mix of tef and wheat or rice flour for injera. We also encountered regional variations in injera based partly on what crops the local elevations could sustain. In Lower Omo Valley, for example, some boys guided us to a market that sold whitish corn injera, a reddish brown sorghum injera, and standard grayish tef injera.

Berbere, a reddish dried spice mix, found its way into nearly every meal. Like Garam Masala, there’s no standard recipe but if often includes onions, garlic, herbs, chilies, salt, and several dried spices such as fenugreek and cumin varieties unlike what’s typical in the US. Sometimes Berbere was cooked into a dish, sometimes it was mixed with oil and served as a condiment. Berbere prices have gone up recently, supposedly because of the effect of drought on growing chilies.

Another dried spice mix, mitmita, has more heat than Berbere and was served either mixed with oil as a condiment, or as a powder dip for scrambled eggs or meat.

In the Lower Omo region, they served a wet condiment called dada. It was made with fresh green or red chilies and had quite a kick.

We being farenjis (foreigners), seasonings and/or condiment portions were sometimes toned down. A group of Chinese tourists spiked their food with some laoganma, a chile paste, they must have smuggled in.

To my American eyes, Ethiopian (“Habesha”) food is traditional to a fault— innovation is focused on tweaks to traditional dishes rather than creating new dishes. For example, the Ethiopian cook on our Danikil trip made some kick-ass fried goat on the bone and boneless goat tibs— his special ingredient was soy sauce!

I spoke to Ethiopian guides and lots of international folks living in Addis,
and they expressed confusion or laughter when I asked them to name a restaurant or dish that advanced Habesha cuisine.

That’s why Meshane’s recommendation, Kaba, was such a cool spot to visit. The chef’s tweaks to more traditional dishes distinguished themselves in flavor and quality from previous versions we’d eaten. We didn’t eat any of the four fully experimental dishes— they were out of the one that appealed most to us, and our group wasn’t as excited about the other three.

The meal started with a complimentary wedge of crisp, mitmita (?) flavored injera topped with a tomato, pepper, and onion salsa. It reminded me of a dosa.

We followed with a typical breakfast item, chechebsa, thin unleavened pancakes torn by hand and coated in Berbere and honey. I loved the combination of chewy, sweet, and spicy.

The “special Doro wot” had a complex oniony base and the combination of spices and grilled chicken breast had an Indian feel.

I’ve never understood the appeal of kitfo in the US, but I liked the way we had it at Kaba. The ground raw beef was lightly seasoned with spices and butter (clarified niter kibbeh?). That in and of itself didn’t excite me, but I began to appreciate it for its texture when I dipped it in a spicy red paste, mitmita powder, or a crumbly white cheese (ayibe).

I hope Kaba succeeds— we were the only party there on a Friday night.

The last day of my trip, I took Addis Eats’ Hardcore Market tour. Even after 18 days in Ethiopia, the $85 price tag was well worth it— the guide was adept at answering the weeks worth of pent up food and culture related questions.

The pre-6am tour of the wholesale market was a ton of fun. Workers broke down the mountains of produce and moved them at a rapid pace over slippery, food covered ground. I got caught in the crossfire a few times and got yelled at by vendors— thank goodness for the guide! 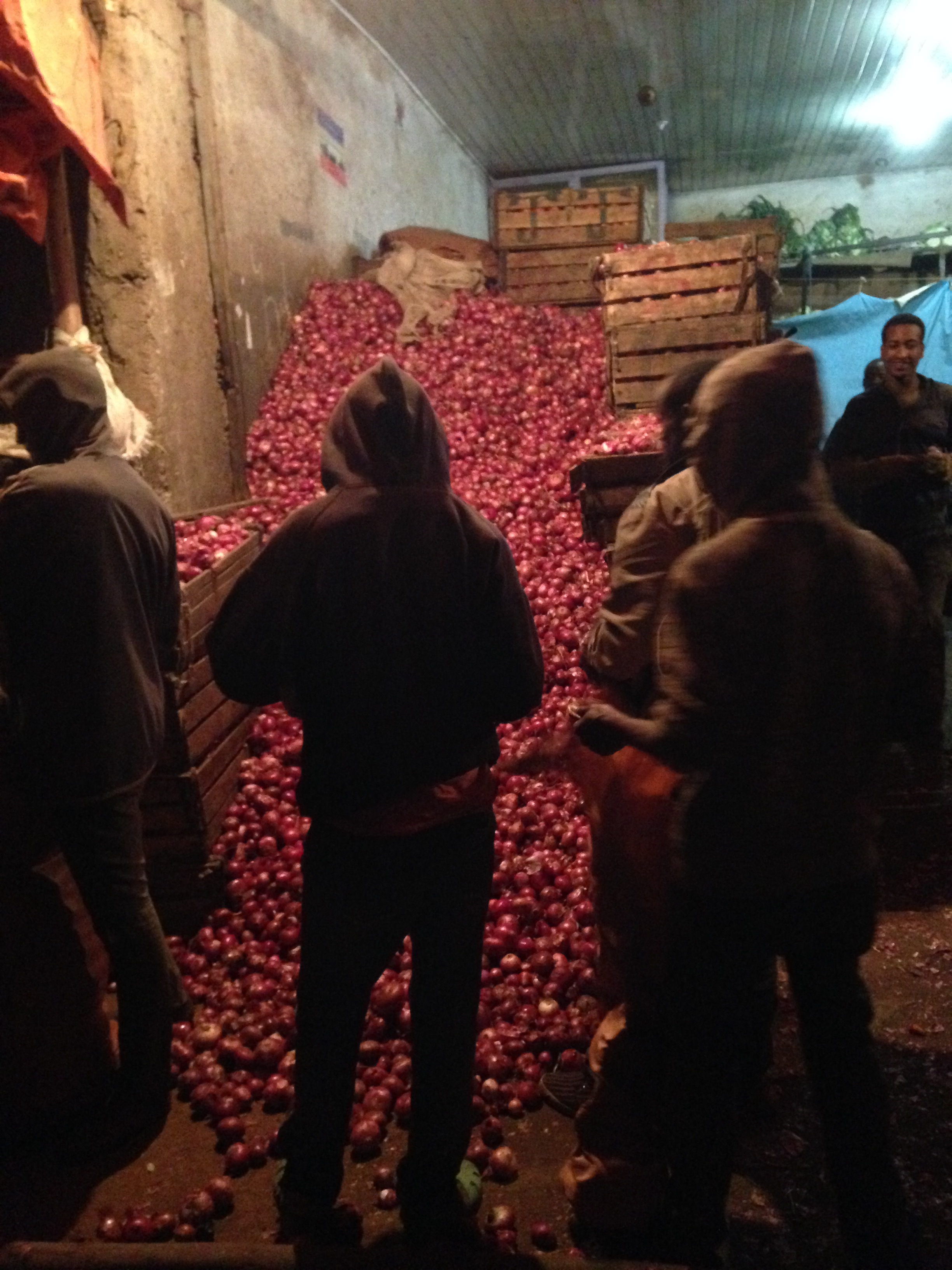 I won’t spoil the totality of the 4+ hour tour, but suffice it to say Addis Eats organized locations for Anthony Bourdain’s Ethiopia episode of “Parts Unknown.” Bourdain enjoyed his lunch at Kategna’s newest location-- my breakfast there was likewise stellar.

Schedules and/or geography often limited us to hotel meals, but one word saved us from eating spaghetti everyday – “habesha” refers to both the people and traditional foods of Ethiopia, and saying it to a server got us the good stuff. The only Habesha dishes we had at hotels for breakfast were fitfir (torn injera spiced with Berbere) and porridge (maybe sorghum). Otherwise, it was mostly breads, overcooked omelettes, and industrial toppings— honey, strawberry jam, and marmalade.

It’s unadventurous to eat mostly at hotels, but the limited range of Habesha dishes and odd travel schedules made us reluctant to explore more. There isn’t much incentive to try a random place’s tibs when your hotel is making the same dish, and with a better guarantee of refrigeration and hygienic cooking. Some highlights: 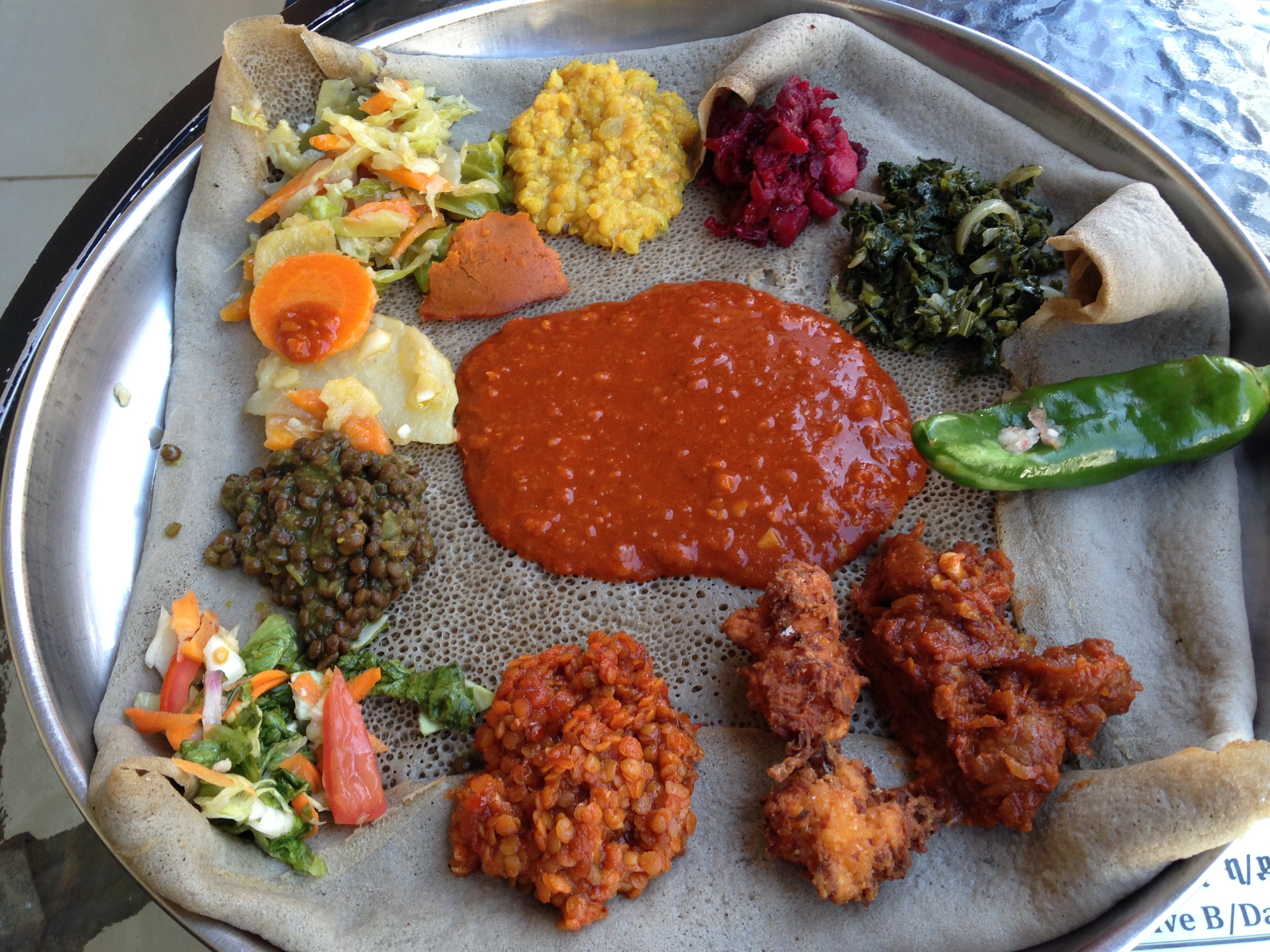 Bahir Dar: Cafe Olive and Restaurant had our first great beyaynetu. The messer wot was very fresh —each lentil retained its structure. 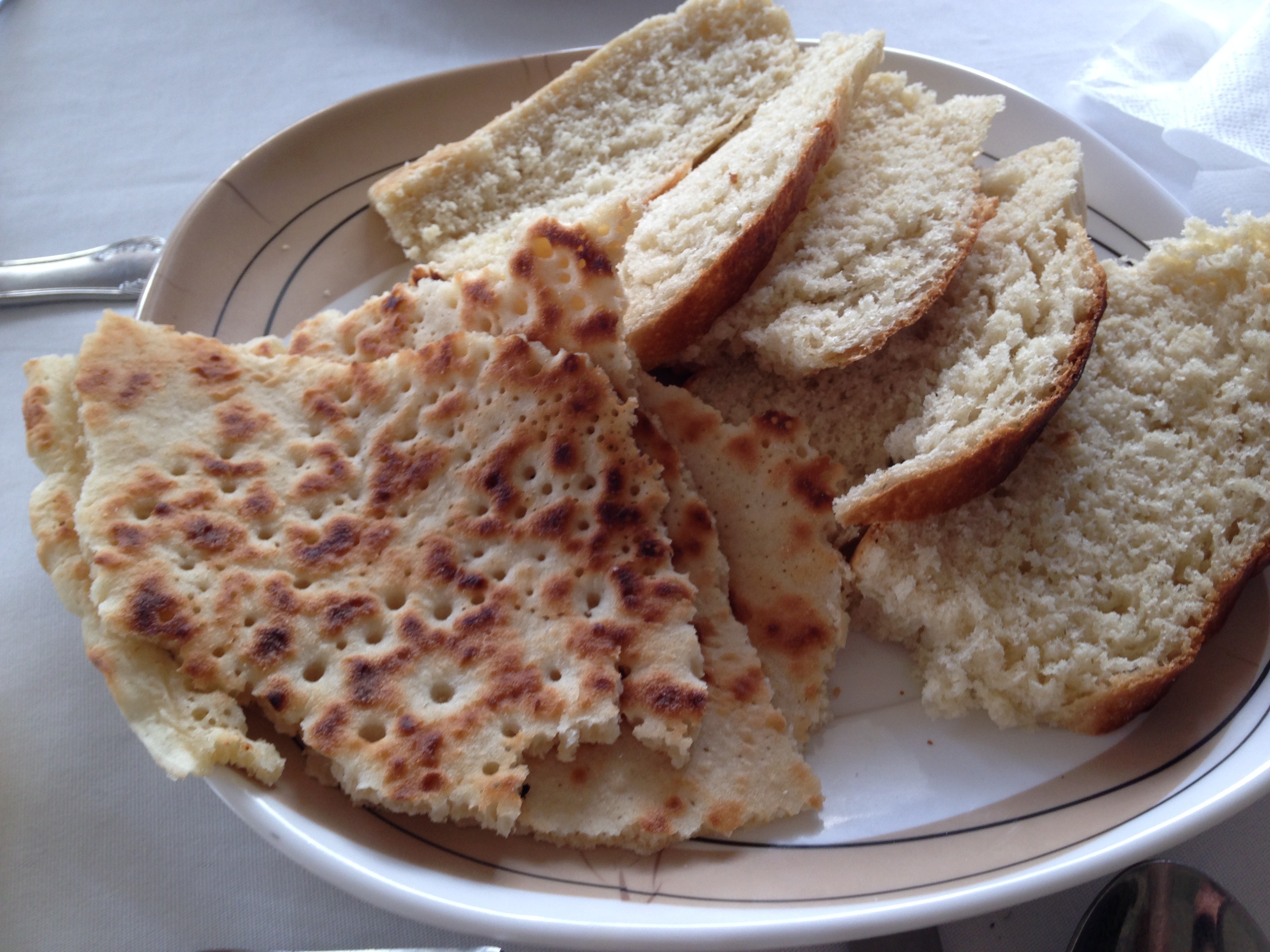 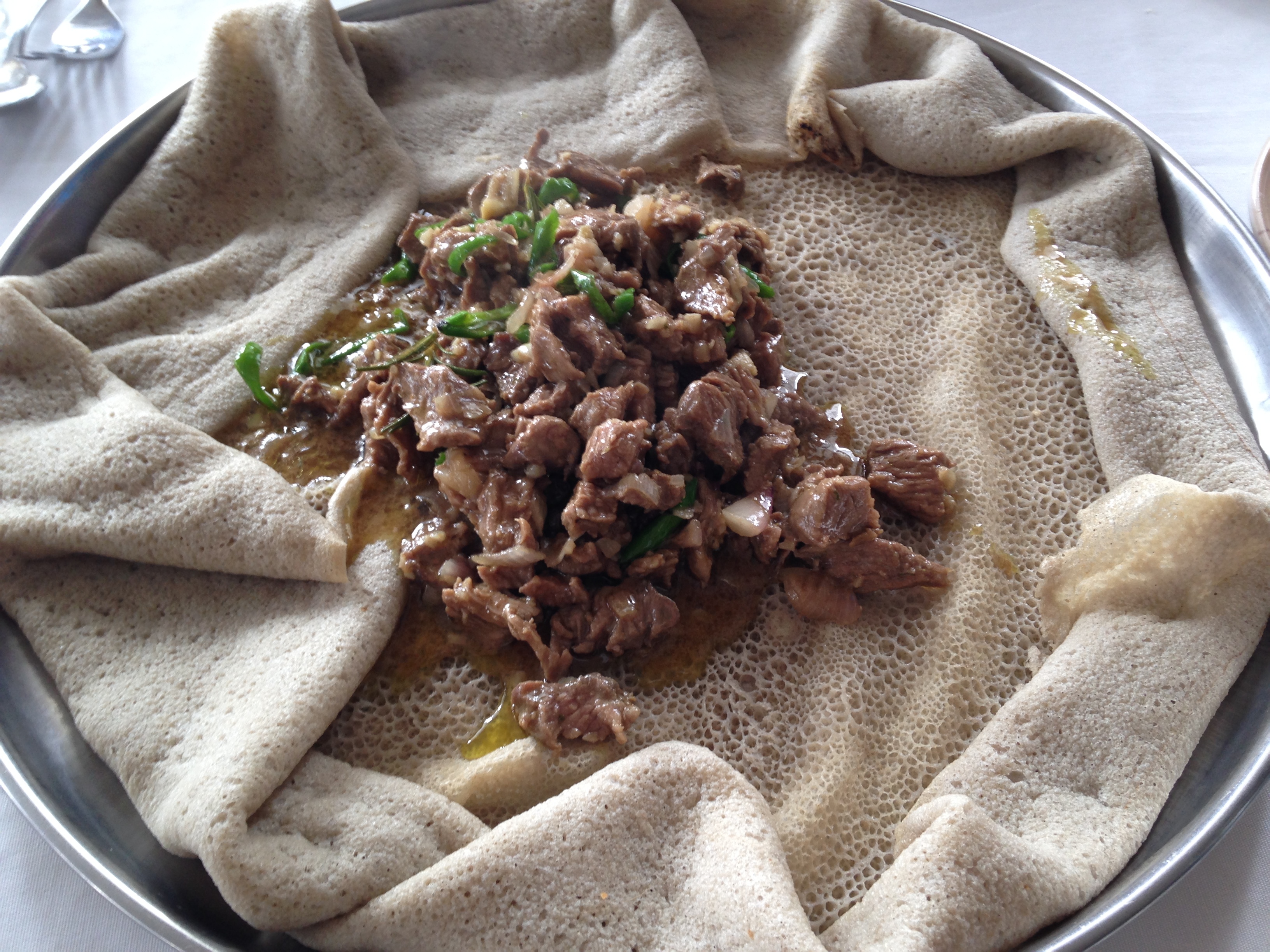 Lalibela : really good, rosemary heavy, lamb tibs at the Lalibela Lodge. They started us with a generous portion of complementary flatbread and local honey. 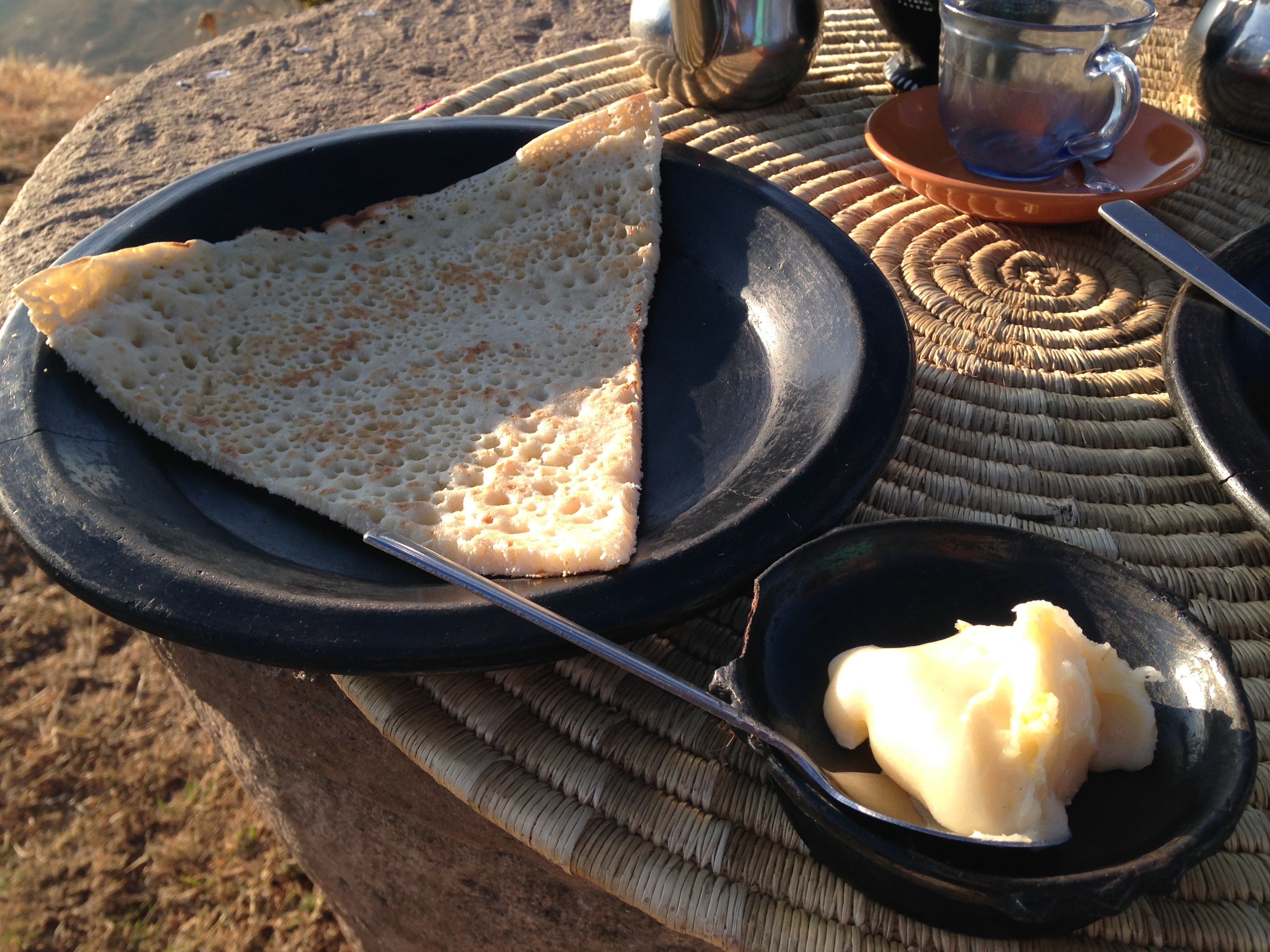 Lalibela : the Hudad Lodge is at 9000 ft and we did a beautiful 90 minute hike uphill to stay there. We ate dinner in the main hut, around a fire. Excellent beyaynetu for dinner followed by a great selection of fruit for dessert and traditional singing. Breakfast included milk straight from a cow, flatbread and local honey, and a choice view of the region. 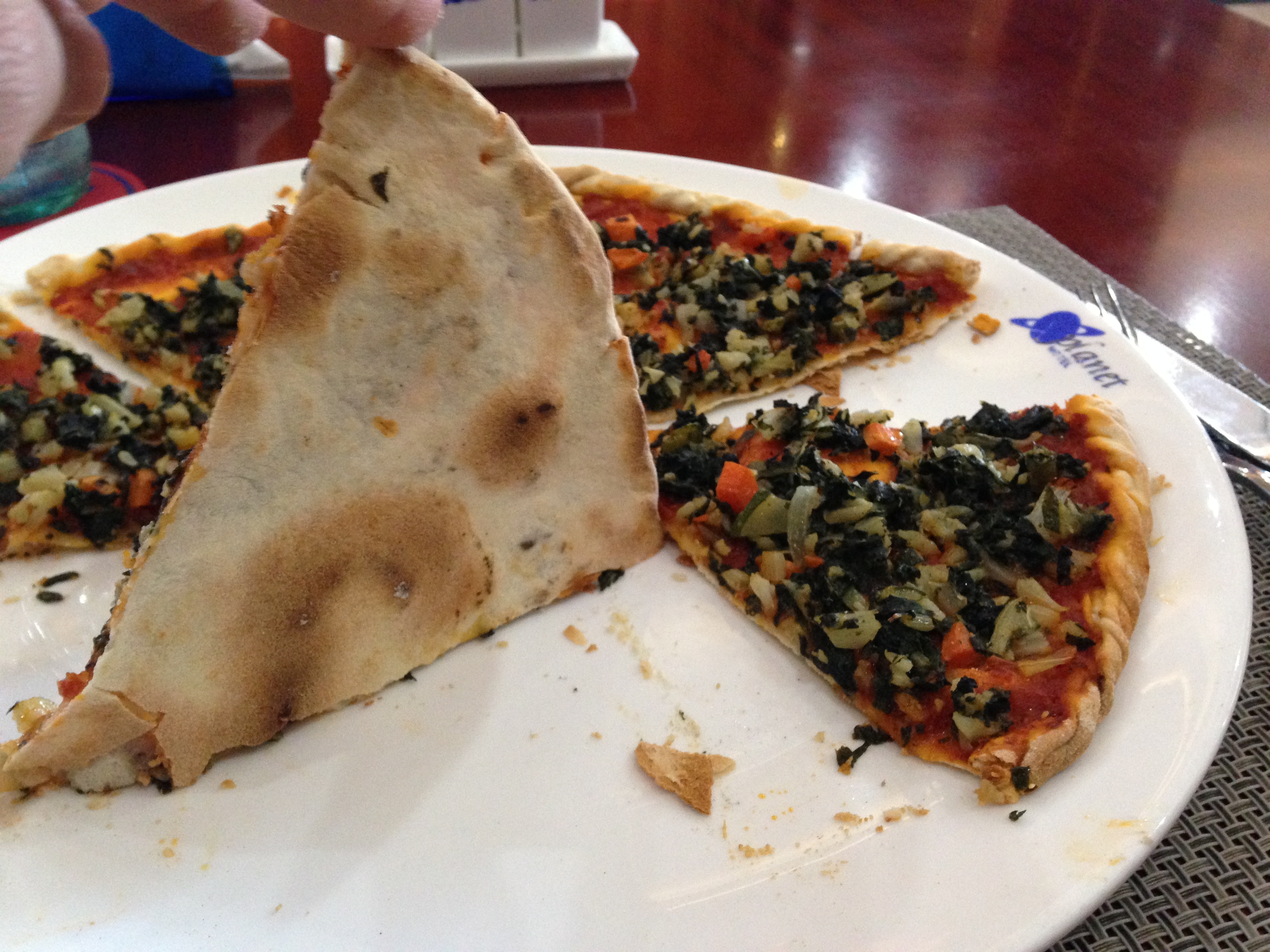 Mekele : Planet Hotel’s downstairs cafe had a “fasting pizza,” which was a fun fusion. Chopped carrots, greens (spinach?), and a hint of Berbere on a crackery crust. 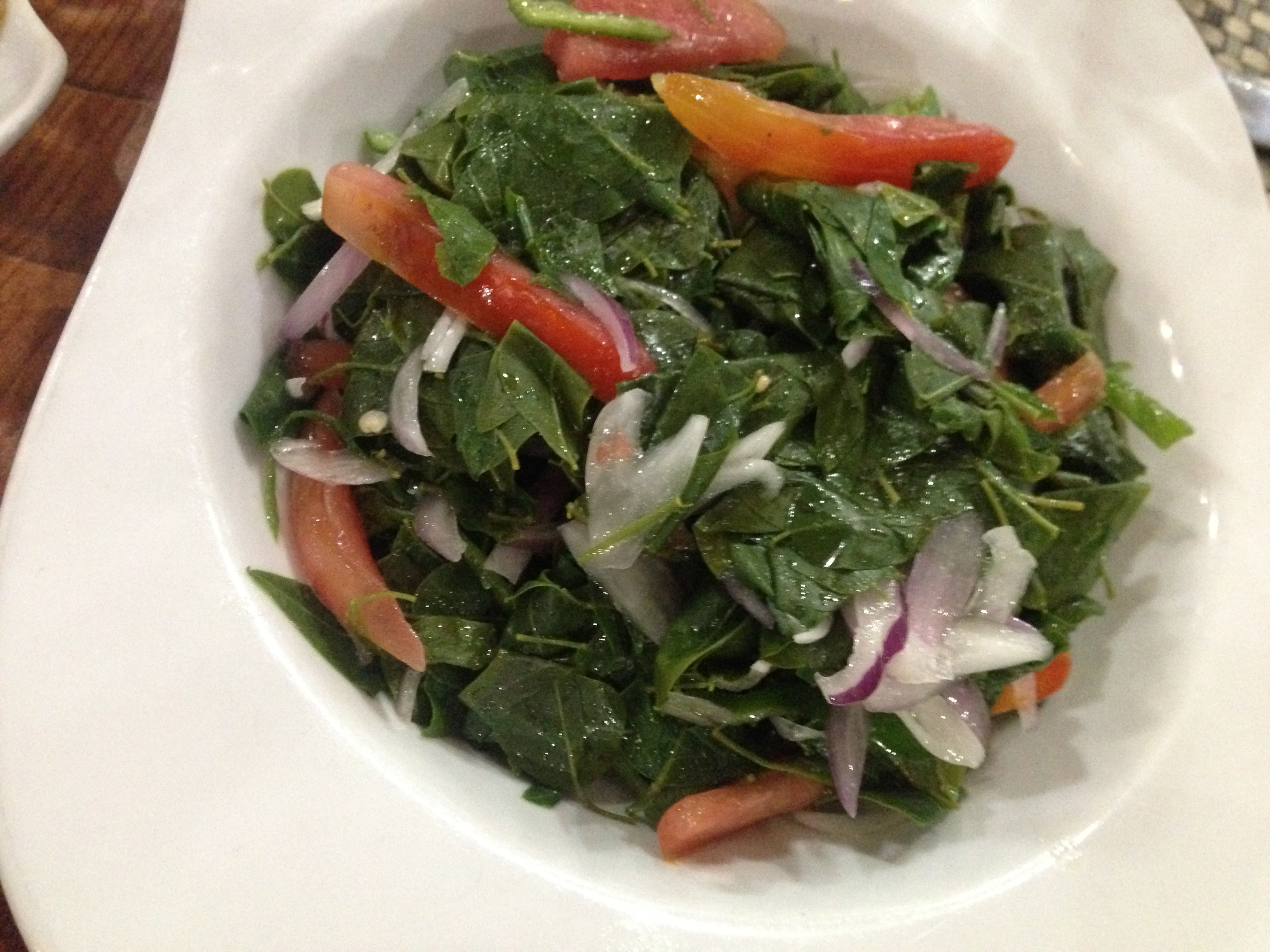 Arba Minch : the Paradise Lodge suckered us in with a crappy buffet the first night there, but enough goading got us access to an a la carte menu the second night. “Grilled” means pan-fried apparently, and we enjoyed the “grilled” Nile perch and the fish (tilapia?) tibs. A fish salad made from fried strips of fish and crunchy vegetables was also pretty good. Cooked moringa, a local green, made a good base for a tomato salad. 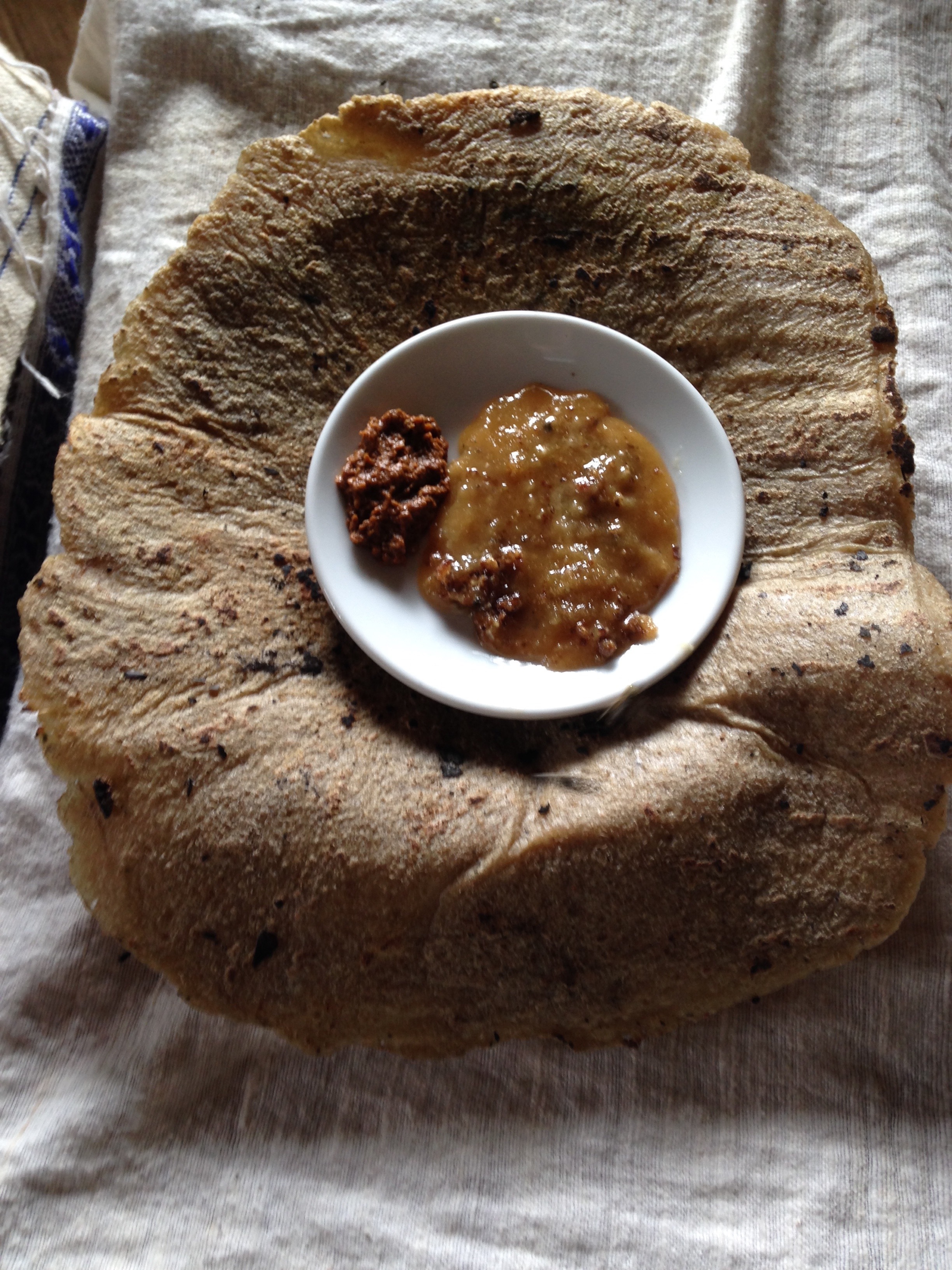 Dorze village (Omo Valley) : our tour showed us how they convert ensete (false banana) into a staple food: kocho. They first shave a wet pulp off each branch. It smells woody and a bit like cucumber. It ferments for several months, and then is chopped into a paste resembling corn masa. The kocho is then pressed flat between enset leaves and grilled. The texture and outside taste resemble a thick handmade tortilla, but the inside is kinda funky. They served it with a red dada made with garlic, ginger, and chilies and some awesome local honey, which a few dozen bees liked as much as we did. The tour, which ended before noon, also got us drunk on a local barley “shnappes” made from barley, and some servings of a very smooth honey wine (tej).

1 Like
Underrepresented national cuisines in the SFBA
Help cover Hungry Onion's costs when you shop at Amazon!