I have been a long time fan and following of the owner(s) of this establishment. To give you a bit of history behind it the owners are two brothers Jack & Jeff Sinanj, Jack is more commonly known from Ben and Jack’s Steakhouse which has been a staple in the New York Steakhouse scene for approximately 15 years.The Empire brand which the brothers are expanding has been around about 5+ years, this location is their latest which opened a few months ago, this was my second visit to this location.

Ben & Jack are both Peter Lugers descendants, and their steaks are fashioned after the Brooklyn landmark. For me Ben & Jacks served the closet quality and taste to Lugers as any steakhouse in Manhattan, done in a far more pleasing environment. Now with this latest location under the Empire brand, they have taken things to another level.

The quality is equal to what I have become accustom too, and I will place it on a very close level to Lugers, however the ambiance of this newest location far surpasses any other I have experienced in Manhattan. The service is top notch, never is your water glass left half empty or is anything left unattended to. The steaks are prime dry aged and truly of the highest quality, finished in butter and charred to perfection.

If you are looking for a truly exceptional meal and overall dining experience I strongly suggest you check out Empire Steakhouse at 151 E. 50th. Below are a couple of pics from my meal last night;
Apps: Bluepoint oysters - Shrimp Cocktail - Bacon
Entree: Porterhouse for 2 - Creamed Spinach - Truffle mac-n-cheese (as decadent as the surroundings)

Everything was EXCELLENT. I highly recommend.
(sorry I took the pic after I already started eating, I’m not a very good blogger) That looks like a boneless strip cut from the end of the center cut region.

I was back again tonight, same meal, same excellent results!

People…if you are from New York or if you are planning a visit I cannot encourage you enough to give Empire a try. This weekend (Aug. 13th) was my daughters 21st birthday and we did the day/night in the city. Dinner was here, in the private “Wine Room” which was perfect for a party our size. (15 people)

Both the overall dining room/atmosphere is so far superior to any other steakhouse I have ever been to (and I’ve been to my share) to the continued quality of the food, I just love this place. Here are some pic’s of the festivities. I’ve previously posted pics of the food, this time of the venue. 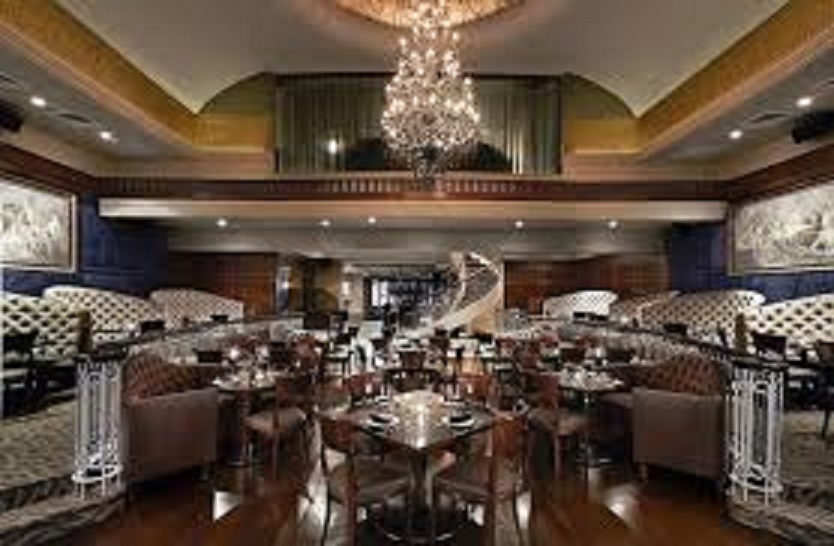 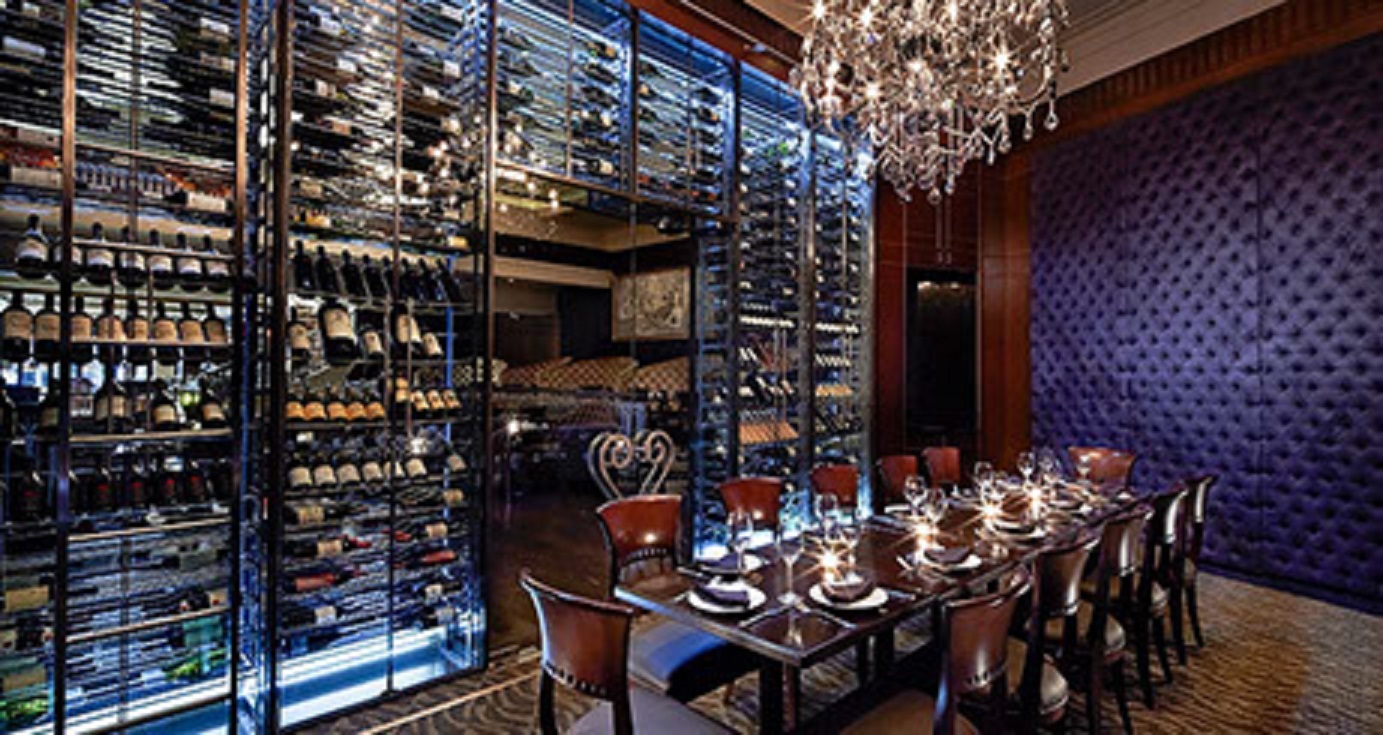 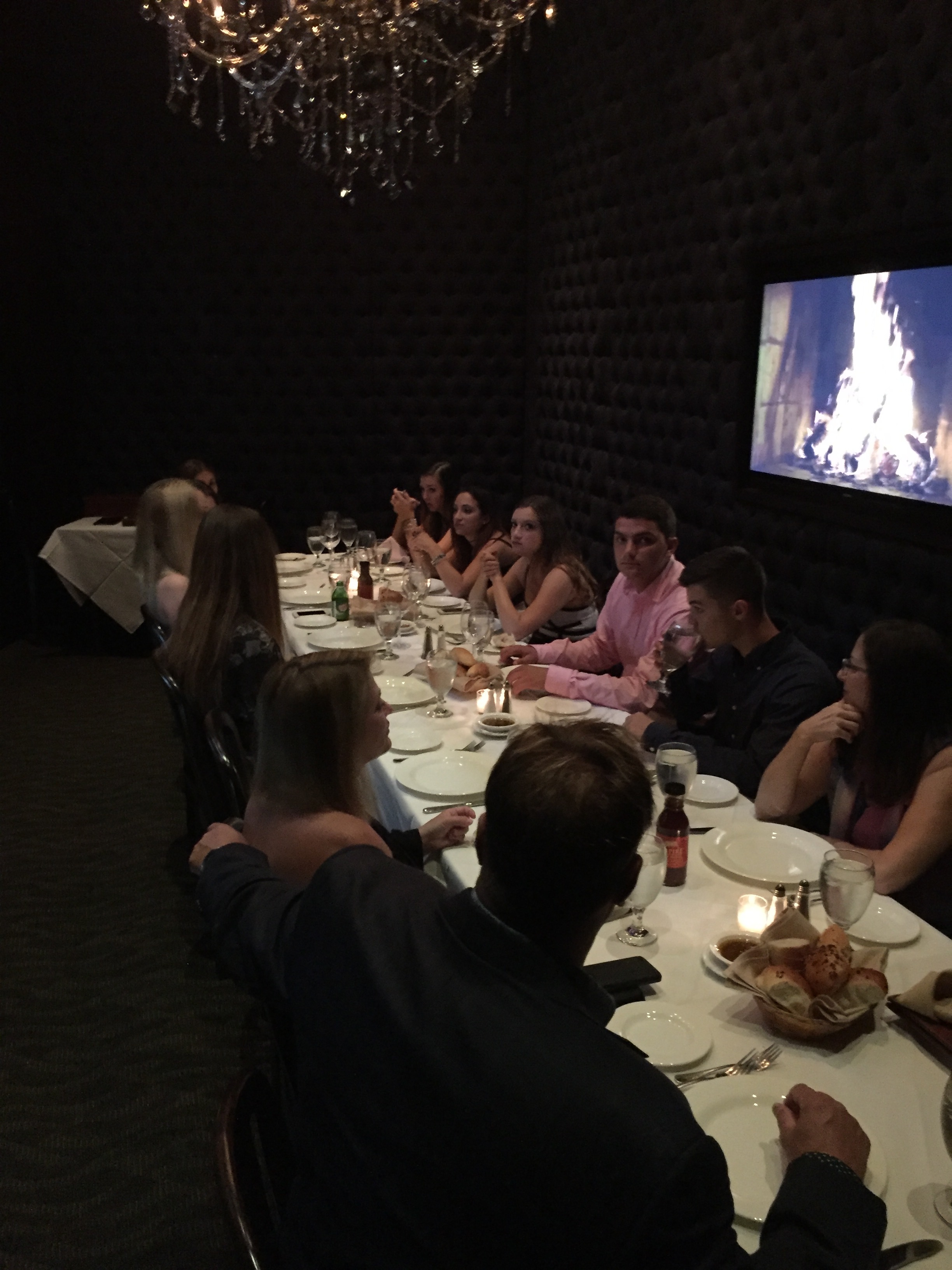 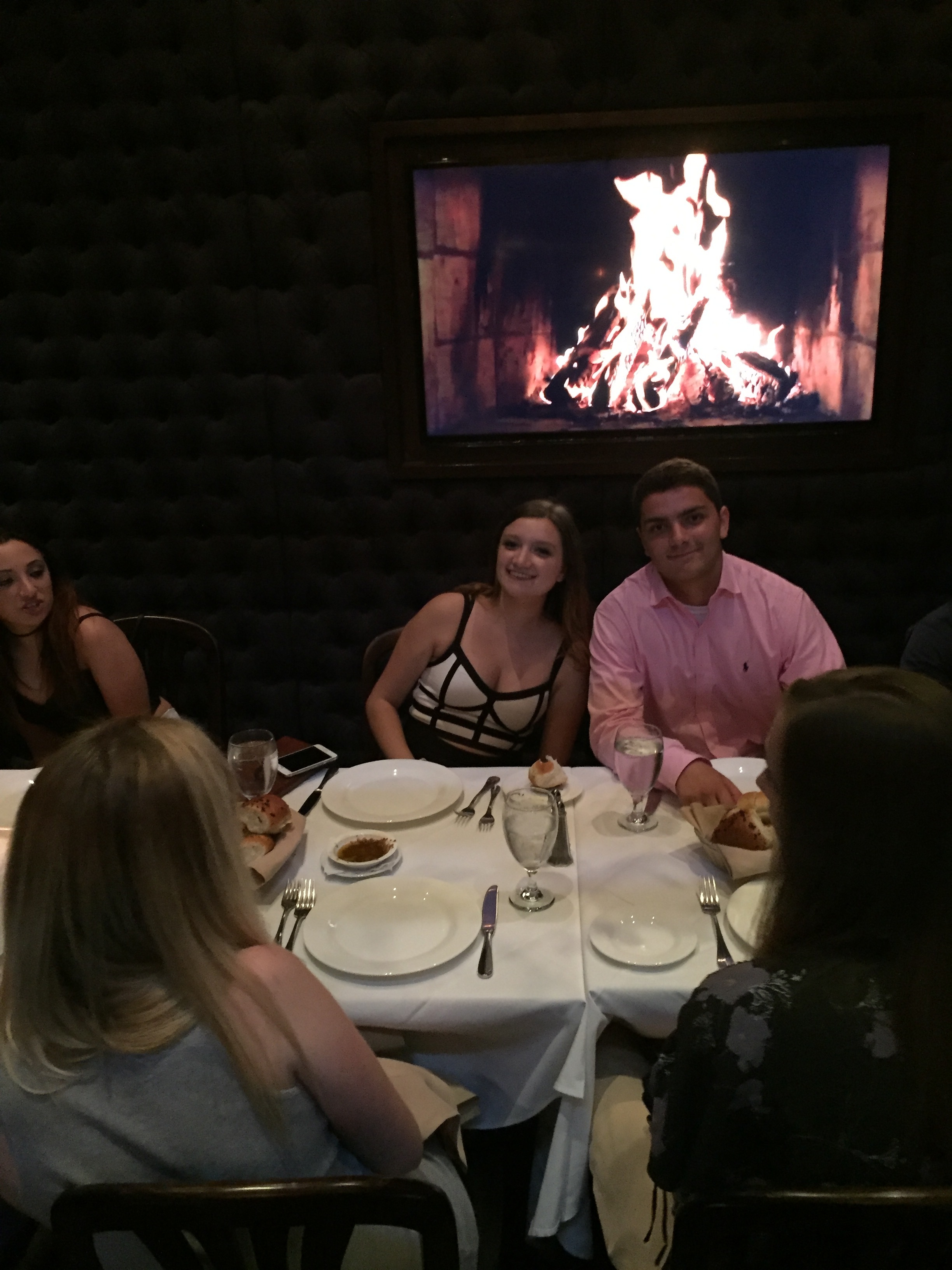 Belated Happy birthday to your daughter.
Is that mini me in pink?
The ambiance is very appealing to me.

Yes that is my son! The ambiance is truly one of the best on any restaurant I have been to, let alone of a steakhouse.

@NotJrvedivici, based on your recommendations, we’re heading to Empire East tonight for an impromptu date night. A Manhattan, a big fat ribeye and a side of creamed spinach will hit the spot on this wet and nasty day! I shall report back in full tomorrow…

Awesome!! I look forward to hearing how you enjoy it!!

Well, last night was kind of a mixed bag. The space is very nice, definitely not your standard-issue dark wood paneling steakhouse. I can see how the long tables in the center would be great for a big party! We were seated at one of the round tables along the side, which was just a little awkward for intimate conversation, but comfortable enough. Service was good, although our waiter was a bit obsequious for my taste - a few too many bill-padding recommendations and a few too many ill-timed inquiries about whether everything was good (he must have caught me with my mouth full 4 or 5 times).

As for the food and drink, I was pleased with some aspects and disappointed in others. The drink menu/beer/wine list did not impress. Aside from a few classic cocktails like a Manhattan, Collins, etc., the rest of their cocktails were syrup and flavored vodka concoctions - it made me think that their core clientele must be 20-something sorority girls. The Manhattan I ordered was fine, but I was hoping for a more interesting/creative list (they do have their cocktail menu online, so mea culpa - I should have looked beforehand instead of having expectations of grandeur). The wine list was HIDEOUSLY overpriced. I’m used to a 3-4x markup, but I was seeing bottles that I buy at the supermarket for less than $10 marked up to $55-60. Also, almost the entire “by the glass” list was Coppola, which isn’t bad wine, but I don’t care to pay $14 a glass for it. I had a second Manhattan instead. DH stuck with beer despite the lackluster selection and small pours.

They started the food off on the wrong foot with a basket of stale rolls. We don’t eat much bread anyway and certainly don’t expect anything special in the bread basket at a steakhouse, but stale rolls are really inexcusable. We had a slice of bacon each, each ordered a ribeye (mine medium rare, his rare) and creamed spinach and sauteed broccoli. The bacon was excellent, thick and tender with just the right amount of chew, nicely seasoned. The waiter recommended their steak sauce with it and it was a good combo - I would never put such a sauce on a steak, but with the pork it was good, more or less a tangy BBQ sauce with some warm (nutmeggy?) spices. Broccoli was fine but the creamed spinach wasn’t actually creamed! It was a bright green puree of spinach, not a hint of cream to be seen or tasted. It tasted fine but not like creamed spinach, and the texture was basically baby food.

Steaks were not up to snuff, though, IMO. The meat wasn’t especially well-marbled and didn’t have the dry-aged funk or texture I was hoping for. Mine was also cooked closer to medium - grey edges and light pink middle near the bone, with the outer edge/deckle cooked to a solid medium. I expect a ribeye to be cooked more at the edge than at the bone, but IMO it was overcooked, although not enough for me to complain or send it back. However, when a manager (or maybe owner - my husband was embarrassed enough by my critique so I didn’t ask) stopped by to ask how it was, I showed him my steak and mentioned that I ordered medium rare and asked if that was how medium rare is meant to look at this particular restaurant, because I know each steakhouse does it a little differently but by my reckoning it was a bit over. Instead of owning it, he gave me a song and dance about how their burners are at 18000 BTUs, which causes it to cook one way, and the steak is thinner on one side, yada yada. I basically stopped listening after he tried to convince me that 18000 BTUs has anything to do with how a steak is cooked (or that it’s a strong flame, my stove at home has an 18000 BTU burner!). The one saving grace was that the more-cooked steak had a lot of delicious crispy bits around the bone and exterior, which my husband’s less-cooked steak was lacking.

Anyway, we passed on dessert, so here ends the review. It wasn’t a terrible dinner by any stretch and if I wanted to take people to a steakhouse with a non-traditional ambiance, I could see this being a decent option, especially if said people weren’t major steak snobs. I doubt very much that DH and I would return, though, especially given that my question regarding the steak temp was sidestepped. Too many other places to try to give this one a second chance!

Wow…I feel like I owe you a dinner! I’m so sorry the place didn’t live up to your expectations. I don’t think I’ve ever had the rib eye there it’s always porterhouse for 2+. When drinking I’m a stoli martini guy so I’ve never looked at a drink or wine menu. Geeze I truly apologize.

Wow…I feel like I owe you a dinner! I’m so sorry the place didn’t live up to your expectations. I don’t think I’ve ever had the rib eye there it’s always porterhouse for 2+. When drinking I’m a stoli martini guy so I’ve never looked at a drink or wine menu. Geeze I truly apologize.

No need to apologize! I appreciate the recommendation and it never hurts to try something new. We had a lovely evening even if the food wasn’t perfect, and I cleaned my plate (including chewing the crispy bits off the bone), so you know it wasn’t a BAD steak.

I would have done the porterhouse but my husband prefers ribeye, so when its just the two of us we generally get our own steaks rather than sharing the porterhouse for two.

So you sat in one of the circular booths? I had my daughters 21st birthday party in the wine room over the summer, they did a great job for us. Also the Kimberly Hotel next door is beautiful! (We stayed the weekend there)

So you sat in one of the circular booths?

No, we were actually at one of the tables on the floor - the ones that are basically round tables with one edge cut off. They are a smart design as they allow for more clearance along the aisle, but sitting there with DH felt just a little awkward, as we were neither directly next to each other nor directly across from each other. Once I got used to the angle it was fine, though!