Although I am still saddened by the loss of Via45, I found myself in that space enjoying my evening once again. The new restaurant at 45 Broad St in Red Bank, Elli’s Backyard, had its soft opening last night.

The menu leans towards Italian so I had the chicken parm. After all, any chef in this area worth his salt should be able to do a good parm. When it arrived, two massive white meat fried cutlets sat atop a mound of linguini. It was really good. Crispy juicy chicken with a nice tomato sauce and just enough sauce and cheese to accompany, not smother the chicken.

There is also an Asian bent to some other dishes, most notably the teriyaki with rice served in a hollowed out half pineapple. We saw a few go by and they looked beautiful. We opted for the miso glazed salmon over fried rice instead. The fish had a ton of flavor and the rice wasn’t at all greasy. We enjoyed it all very much.

We also shared a house-made flourless chocolate torte that was almost a light ganache and was just sweet enough. Very nice.

The owner said they are going to be changing up the menu every 90 days. He also said he is waiting for a huge wheel of imported cheese so he can do cacio y pepe tableside. I look forward to more meals here.

@seal Glad you enjoyed it. I wanted to check out the menu but… There is no website!

There’s something I’ll NEVER understand.
But if you can access Instagram, here’s their page. There’s also a link on IG to OpenTable. 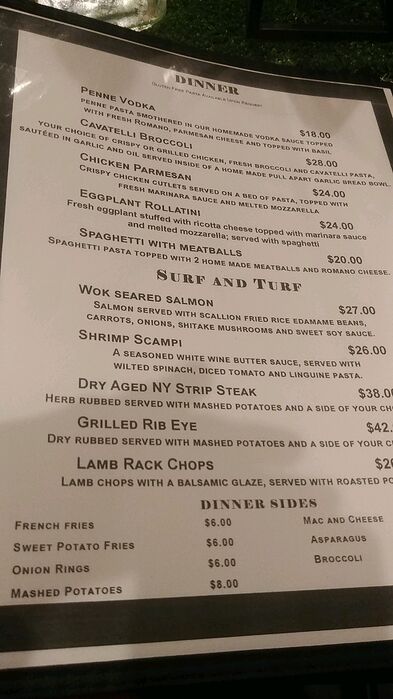 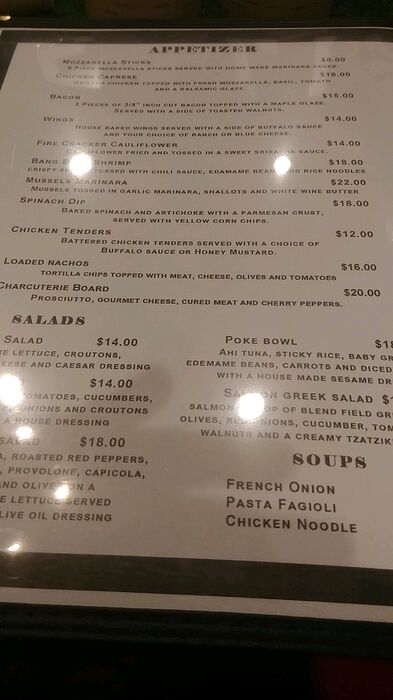 This place looks really interesting. Prices are fair. Could be a big hit.
Does anyone think it would be family friendly?

There was a bunch of kids there last night. Plus there is another page of menu items with some sandwiches and things so I think so.

Have you been to Pazzo? How would you compare it?

All I had was the chicken parm and that would compare well with Pazzo or any parm.

This place was AWESOME!!! the food was amazing
And Patrick (young owner) is on site everyday all day making sure service and needs are met… actually asked for a specific sugar and he went out of his way to make sure I got it
I wish him all the best with much success as this is definitely a little gem
It’s a must try!!!

This is not a “review.” It quotes the owner’s reasons for opening the restaurant and tells you some of the food you’ll find there. Nothing about the author’s opinion re: the quality of the food, the service, etc. So, imo, basically a p.r. piece.

I went last night and had an enjoyable time. A few observations, I’m not sure I agree with the seating arrangements, the tables are either picnic tables with attached benches or 8 tops. We were a party of 4 and we were seated at an 8 top (thankfully) if I was given a picnic table I probably would have left.

The “back yard” theme is throughout the meal. Picnic tables as well as fake greenery adorned the walls and ceilings. There are patches of artificial grass on the tables and your plate sits on a cross section of a tree.

The food was quite enjoyable we split the mussels as an appetizer and they were good. They give you a nice pre-sliced Italian bread with a nicely seasoned evoo that almost makes an appetizer itself.

Entrees were: Lamb Chops (myself) salmon (wife) and a burger (on special a smoked burger served in a glass bowl when removed a plume of smoke rises, interesting), I honestly forgot the 4th meal.

Everything was good 3 double cut lamb chops with a balsamic drizzle on top of home fries, all good and a decent value at $26.

My wife’s salmon she enjoyed and said it was cooked perfectly however it was served over “Chinese fried rice” which was “ok” but certainly nothing special.

The burger received good review - however the glass smoke thing is for “wow” factor vs any culinary enhancement. So good burger unique presentation.

Desert was back yard themed as well, it was a brownie sundae served in a mini wheelbarrow with small shovel as utensils. It again was good, but not “great”.

All in all a nice night but nothing to make me want to run back. Certainly not on a Semolina level nor on the level of their predecessors.

When I go back I will try the chicken parm which is supposed to be their signature dish, just wasn’t feeling it last night.

Give it a try for yourself just be warned about the seating!!

One side note: the owner is one of the servers or the food runner, he was all over the floor delivering food. One of our dinner companions wanted to chat him up a bit, she made a few attempts and while he was understandably busy, he seemed rather put off by the request to talk. I completely understand being busy “in the moment” but during the night you should be able to squeeze in 5 uninterrupted minutes to accommodate a customers inquires about your new venture. He seems as if he could use a bit of a hospitality refresher course.

@NotJrvedivici I replied upthread to a post by @CurlzNJ which she described as a “review,” but which I felt was just a p.r. piece. Her post seems to have disappeared. Now, we have a genuine, detailed review from someone we trust. So, thanks for that! Unfortunately, the fact that picnic tables with benches comprise most of the outdoor seating (very uncomfortable for me because of back problems), and I doubt they’d seat just the two of us at a table for eight, though the food sounds decent enough to give it a try, we won’t be going to Elli’s.

The picnic tables were half of the tables inside the restaurant! Outside they had two(3?) regular tables which I assume you can request when reserving.

Those of us mobility-challenged are not keen on booths; picnic tables with fixed benches are definitely not on. And if we’re short, getting up on stools doesn’t work either.

So Justin and I went to Elli’s Backyard today for a late breakfast/early lunch. We did not intend to eat there. Justin had wanted to go to Toast (I’m a fan of the Asbury location NOT Red Bank but we did not feel like driving all the way down there). However, we were unaware that this Toast location is actually closed on Sundays (what kind of diner/breakfast/brunch place closes on Sundays???). Anyway, we walked around, saw Elli’s Backyard, and I remembered this thread. So we went in.

The hostess was very friendly, as was the rest of the staff. The interior is quirky/interesting. Everything from the tables (some actual picnic benches, others “normal” tables/chairs), the walls, and ceiling, are reminiscent of truly being in someone’s backyard. They actually have herbs growing on their walls-- mint and basil from what I remember.

I saw pumpkin pancakes were a special and so I figured in the spirit of Halloween I would order them. Justin asked if they could do a waffle with the pumpkin batter and our waitress, the owner’s mother as it happens, was very honest with us and said that the pumpkin flavor is not very strong and it is mainly just orange colored batter-- she did not want him to be disappointed. She did however recommend a “secret menu” item which was the cinnamon roll waffle. She said it was quite good, and the icing would be served on the side. He went with that and I switched my order to that as well. It came with a breakfast meat of choice, with us both choosing bacon. 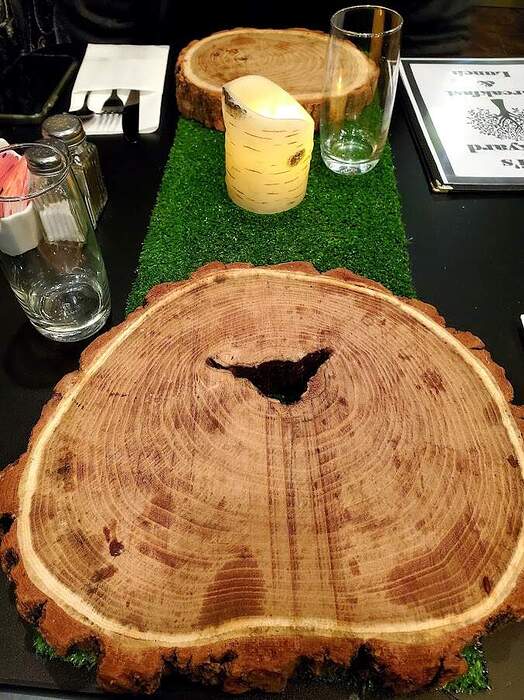 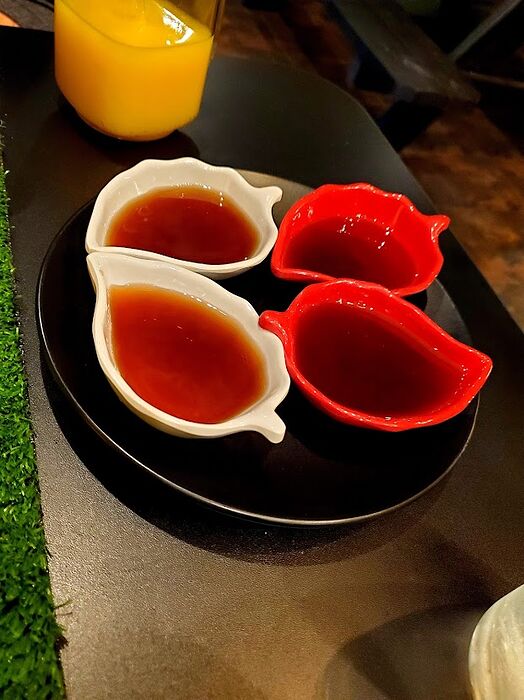 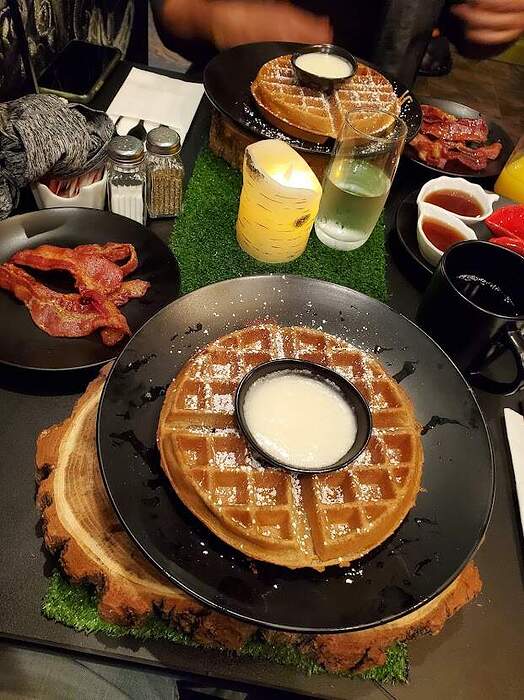 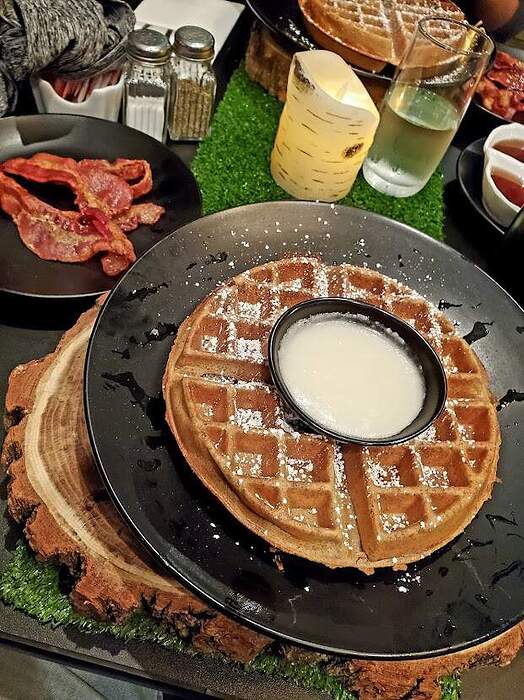 The waffle ended up being delicious. There was plenty of cinnamon flavor and the icing made a nice touch. They also gave us enough maple syrup for several people! I was very content with the food and service, and after perusing the dinner menu, I would probably give it a try. Hard to recommend a place based just on a waffle, but hey, I’ve been let down by simpler at other places.

Some criticisms: the tree ring place settings are adorable and lend to the obvious “nature” feel of the place, but when it came time to setting our plates down, it was hard to maneuver the dishes. Since the bacon was served in a separate dish, that meant four plates on our table. Yes, the two main plates went right on top of the wood, but being so bulky meant moving some things around on the table. Not a big deal but a matter of design vs. practicality.

Also, as mentioned by others in this thread, I don’t know why picnic bench seating was ever thought to be a good idea even within the confines of their theme. We were at a regular table, but after having time to think about it, I’m not sure if I came for dinner here that I would want to eat their $42 rib eye steak while hunched over on a wooden bench.

But overall an enjoyable experience. The hostess also insisted we take Halloween candy on our way out. Such pleasant service goes a long way (see my upcoming post in the genera Red Bank thread).

Re: Picnic Tables. We ran into this problem at Old Glory, in Keyport, in their outdoor space. All picnic tables with attached benches and umbrellas, except for two high top tables and a stretch of bar seats, none of which had shade. Picnic tables are very uncomfortable for us, and the other options not good on a very warm, sunny day. We stayed and sat at one of the high tops only because it was moderately warm and not sunny. I posted about our lunch there on the Old Glory thread.

I probably said this in the Old Glory thread, but for those of us with mobility problems, picnic tables, tall stools, and even booths can be the kiss of death for a visit. Then again, maybe the restaurant doesn’t care.

Well they do have quite a few regular tables. The picnic tables looked to be for parties of 4-6 people.

If I remember correctly the only tables/chairs indoor were all 8 tops. The only 2-4 tops were outside has that changed?