We always sit at the bar so we can get an occasional glimpse of the kitchen and the Wifeacita can supervise the ladies making tortillas, she being a self proclaimed expert.

We got there early when they weren’t busy so I could talk history in general and WWII in particular with my buddy Emilio.

After gently nursing some skinny ritas made by Emiliano, the best bartender, we ordered polaqueso and two crab enchiladas in marisco cream sauce.

The queso is queso flameado with bacon, mushrooms, poblanos, and onions. Be sure and request the cream sauce with the enchiladas or you’ll get the not as good default cheese, a mistake I’ve made a couple of times. They come loaded with chunks of lump crabmeat.

It doesn’t sound like a lot of food for two but we had a good amount of leftovers.

We were finishing our third margarita when I caught a lucky break, literally. Buddy Emilio broke a glass in front of me and made me a new one due to the risk of flying glass.

We were there quite awhile and by then the place was packed with non stop action.

The bar is the place to be for small parties, we made friends on both sides and the people watching is the best.

One girl ordered a margarita and a tequila shot, drained both in record time and went to meet who we presume was her mother.

Another carefully crafted a huge taco out of everything on her beef and chicken fajita plate and proceed to devour it in three bites in less than a minute. Repeat.

Can you tell we love this place? It’s the Washington Avenue location by the way.

One girl ordered a margarita and a tequila shot, drained both in record time and went to meet who we presume was her mother.

The mother/daughter relationship is special!

Back again for a lengthy stay at the bar and some mas ritas and queso.

That drew some smiles and chuckles from the staff as El Tiempo don’t serve no stinking ketchup.

Okay I’m watching a certain review site for the one-star review to be posted.

sit at the bar

Sittin here at the happy hour bar and those tortilla ladies are wasaay down there, I must be at the wrong end.

You have to be waaay to the right. If you’re having margaritas have Emiliano, the guy with the spiked hair make them skinny, he’s the best.

We’re jealous but we were there Saturday for nightcaps after a trip to Merida on Navigation to feed.

have Emiliano, the guy with the spiked hair make them skinny, he’s the best.

The guy who made our skinnies made them truly skinny, tequila, cointreau and lime juice. Another bar back made one for us from a gallon jug in the fridge, and our hero intercepted, dumped it out and made us his version. He had no hair! But very attentive. One interesting bar bloke regaled us with stories about his 3D printer and showed us his rook he was proud of making. See it on the bar between the skinnies? We also had queso which we augmented with the red salsa and diced jalapenos we ordered on the side, a little invention of mine that I’ve gotten friends hooked on. And some of the shrimp ratones, one per person and we about rolled out of there. I’ve never gone to this bar, so thanks for the reco. Definitely got rid of my headache from hardly working yesterday. 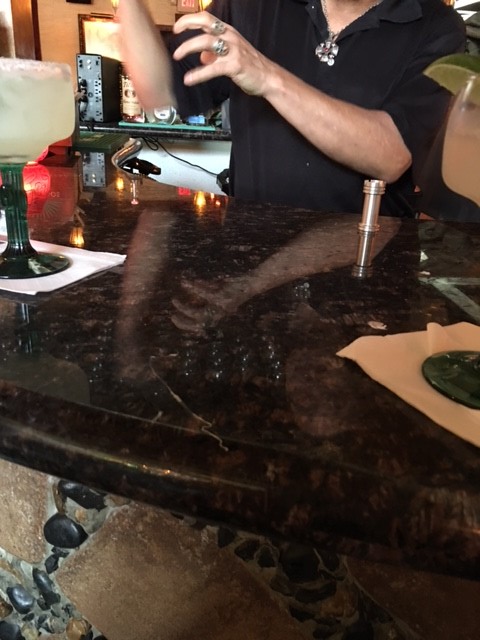 I know that rook, we saw it Saturday and the owner is very interesting, an extremely intelligent person. His name is Emilio, not to be confused with Emiliano and we talk World War II history among other things. I bet he leaned in close as he regaled you.

The guy with no hair made us a couple two weeks ago before Emiliano got there and they were good, not sure of his name.

The bar back that got the rita from the jug is a young guy with black hair if that’s who you saw. I think his name is Gilbert and is new to the position and his English is not very good but he is an extremely hard worker and Emilio sees great potential in him.

Wow, you know them all! Yes, Emilio is worldly and can talk most anything it seems. I wondered why he was working here, but he mentioned he was laid off of a flight industry job.

I’ll be having lunch at El Tiempo today just to spite the SJWs who are throwing their usual juvenile temper tantrum because El T had the temerity to serve AG Sessions.

I guess I’m looking at another oversized enchilada platter and a nap later on. The burdens I bear for my country!!!

I was there for lunch Friday hours before the a$$hats commenced yet another jihad against a business owner, this time right here in H-town. I’ll be going back again this week. I’m guessing all the boycotters, if there are really that many and not just a loud bunch of clowns in a car, understand that boycott hurts only those they pretend to care about, for there surely will be layoffs.

I go through phases, and lately I tried the run of the mill tex-mex combo, which I posted here a couple of weeks ago. It was terrific. Last Friday, I ordered the small jalapeno sausage nachos because my friend raves about the sausage and I wasn’t all that hungry. It too was terrific. Our usual waiter at the Montrose was back - he was gone the week before and I thought he had been transfered to the new 290 location, but turns out he was in a roll over accident. Luckily he and everyone else are fine. He showed us pictures and we all hugged, because we actually do care about him.

You are a great American!!

And an all around good guy.

I’ll be having lunch at El Tiempo today

So how was the food? Which one did you visit? Did you have to fight through protesters?

I had lunch at the 1308 Annex this week. I hadn’t been there before and as usual, it’s dark when you walk in, but they immediately asked if we wanted to sit in the bright upstairs and we jumped on that. I don’t know if I just never noticed it before, but now that my doctor says “eat more fish,” I see that this location at least has salmon and ahi fajitas! I ordered the salmon fajita lunch quesadilla which was darn good, but would have been better with bacon such as they put in the crab and bacon quesadillas. It had a mango salsa in it too. The area wasn’t overly busy when we were there, kinda late, but quite a few enjoying a Friday margarita.

We were delighted to see a favorite server from 1308 already working here, though the close date for 1308 is still up in the air. He wanted to secure a job at this location which is close for his commute. He has worked for the Laurenzos for 40 years!

Amazing! He’s a super nice guy who showed us his vacation pictures (to Russia for the World Cup no less!). Later he brought the location’s manager by and we had a long conversation with her. Again, just a lovely person who has worked her way up from hostess over many years.

Anyway, I liked the second floor, not so much the first. I didn’t see an outdoor area, though there may be one. 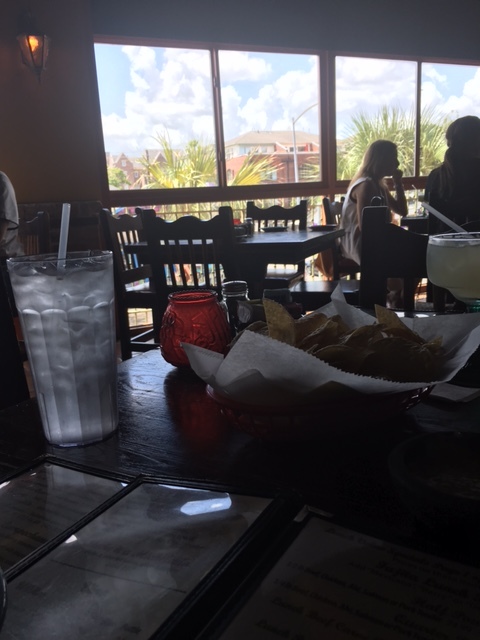 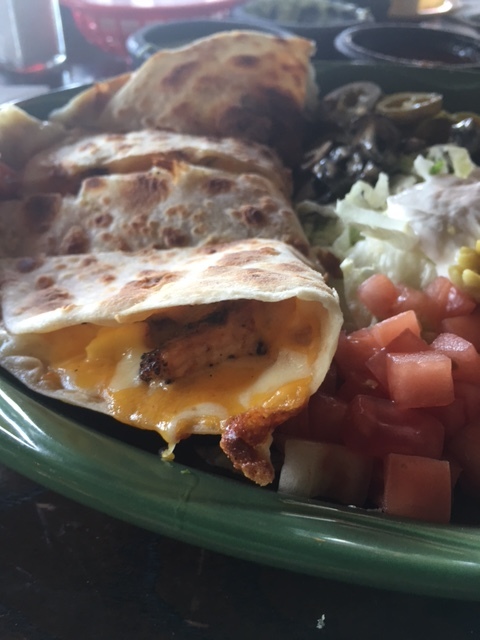 I don’t know what the SJWs did but it’s not working.

We got to El Tiempo Washington later than usual, 6pm Saturday and it was slammed. The Wifeacita was lucky to get her “happy place” at the end of the bar.

That place is a money making machine.

I wondered why he was working here, but he mentioned he was laid off of a flight industry job.

Emilio must be doing ok as he showed off the latest piece of his military collection on his phone a 50’s replica WWII German Sturmgewer 44, the first assault rifle, which he paid a cool $2900.

He came around the bar and showed his new prize carefully accenting each syllable several times.

I love the guy.

but it’s not working.

Great to hear. I
Haven’t been to the Navigation location, I need to check it out. 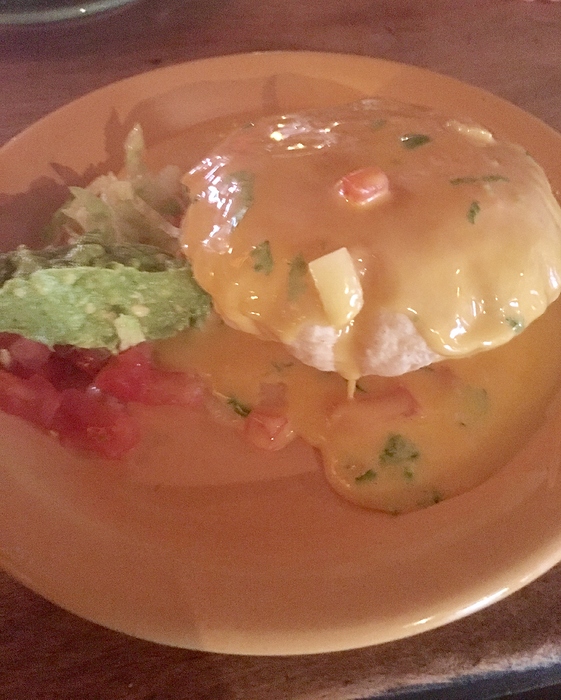