Who was the Edison Chinese food specialist here? I don’t remember. Anyway, here is my review of Edison Noodle House. Ate there just yesterday, and tried jellyfish for the first time.

It looked like a total dump on the outside. The picture I have of the place in the sidebar of this article does not do it justice. As it happens, moments before we ended up walking into the Edison Noodle House, I had remarked that we needed to find a hole-in-the-wall, authentic, dumpy-looking place. That’s when you know it isn’t going to suck. Being in Edison, probably the Asian food mecca of New Jersey, it was as good a place as any to find something authentic. But looks were deceiving here. On the inside of this small establishment was no dump, but rather a neat, clean dining area. It was minimalist—no decor at all—but at a place like this, there isn’t any need. Just give me some real Chinese food. No chicken and broccoli or General Tso here, my friends.

Feeling daring, perhaps from heat exhaustion from walking around Rutgers Gardens for an hour in the intense heat, Justin and I started off with an order of the jellyfish. There is no explanation or description on the menu. Just “Jellyfish”. We did not ask for further clarification, though the waiter, maybe from sheer amusement noted that it was spicy. He hesitated a second. Also as an appetizer we got an order of pork-leek dumplings. We figured we would balance out the bizarre with the recognizable. 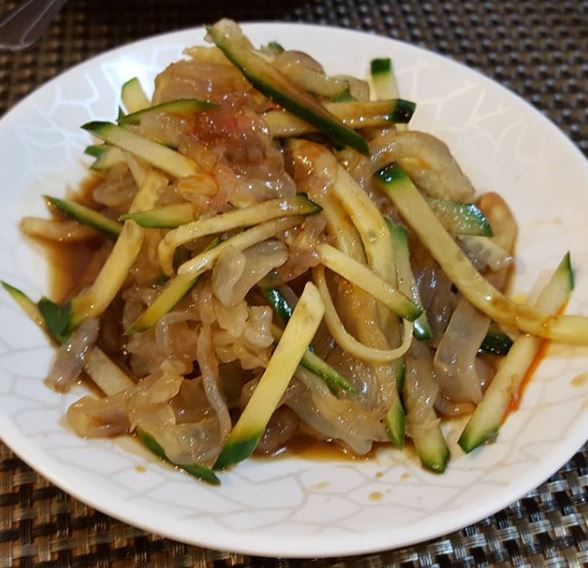 The jellyfish were the first to arrive. Served raw, they had been shredded along with cucumbers and tossed in an extremely mild hot sauce, akin to a chili oil. Our imaginations had run wild about what this would look like, and nothing we discussed came close. It actually was not too weird-looking. Being in the noodle house, they might have been confused for some kind of glass noodles had one not gotten close enough. They were difficult to pick up with our chopsticks, which were plastic and slippery. Nevertheless, we trudged forward. I slurped it into my mouth and was utterly surprised by their complexion. These were not soft, gooey, and mushy like you would expect from such a spineless creature. 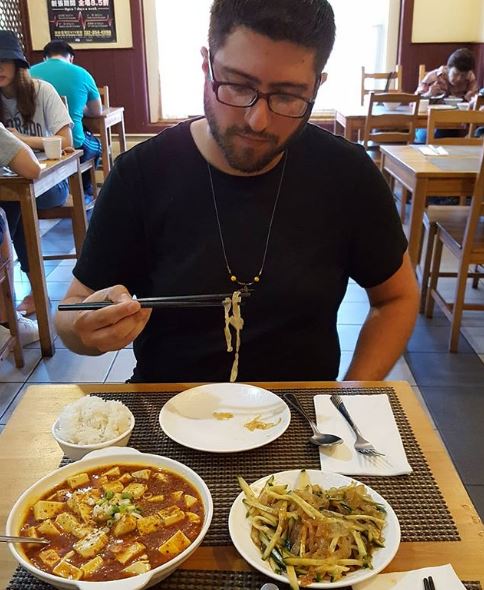 Instead, they had quite a crunch to them. I’m not kidding when I say there was a snap, crackle, and pop with every chewing motion. As for the flavor, there was none to speak of. The jellyfish itself had no taste. It tasted like what it was prepared with. In this case, cucumber and chili. I’m not a fan of cucumbers at all, so it was kind of off-putting. Imagine that: a plate of jellyfish in front of me and I am complaining about cucumber. We both looked at each other with a “that’s interesting” expression. We put the rest aside to save for later. The strips would end up serving as a nice, unexpected palate cleanser when switching back and forth between dishes. 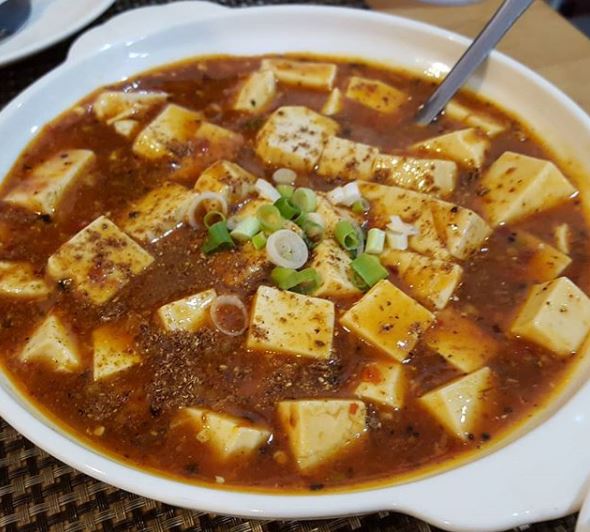 For our meals, we decided to share the Mapo Tofu and a pork noodle soup. The tofu was the second item to come out of the kitchen, followed by the soup. The Mapo was good, but it was missing something. It had the quality you would expect of a takeout joint in the middle of a non-Asian area. Not much flavor or zing, and despite having a sinister-looking sauce, hardly any heat. The menu gave an option of with or without minced meat. While I did ask for the meat, there was some confusion and it was done without. I don’t think it would have made much of a difference. 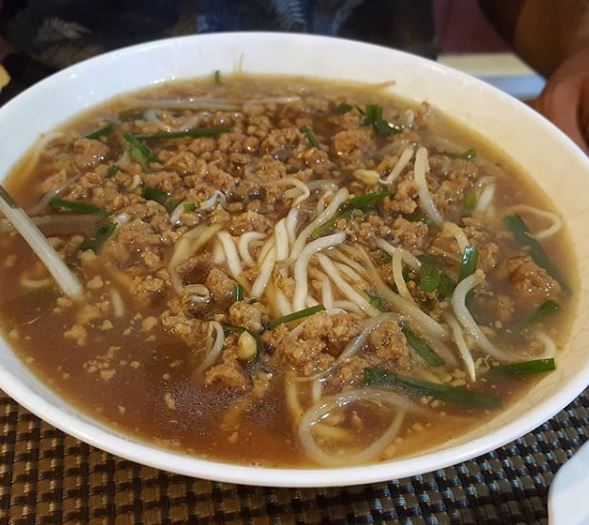 The soup was the winner here. Thankfully, the Noodle House churned out some awesome noodles. They were perfection. Just the right size and chewiness. The broth was wholesome and savory. The bits of meat and scallions that floated throughout added some solidity. Had it been 35 degrees outside instead of 95, this would have been the perfect comfort food. 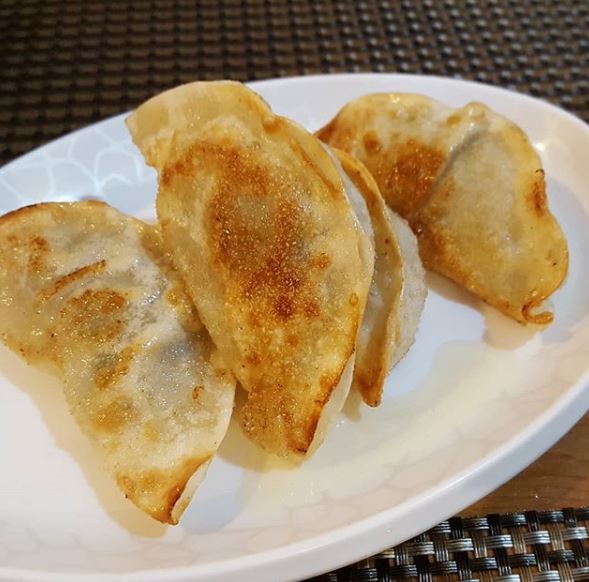 Last to arrive were the dumplings. These were handmade and done to order. We had just about finished our meals when they brought them out. Somewhere along the line, they had encountered an issue. The owner had come over and said, “We’re having a problem with the dumplings. It will be ten more minutes.” We didn’t mind. Those ten minutes passed and they set down four dumplings in front of us and said that the other two would be a few more minutes. I don’t really know what could have happened to cause this. In any event, they were delicious. So fresh that they were almost opening at the seams. The dough was paper-thin, not bulky, and there was a crunch with every bite. It was what every pub-grub potsticker you’ve ever had dreams it could be like. The filler consisting of pork and leeks was flavorful. The dipping sauce they brought over was different as well. I don’t think it was soy-based—it tasted like vinegar.

What to rate the Edison Noodle House? It was a place that allowed me to try something totally new. The service was friendly. Those dumplings and that soup were amazing. The only downer was the tofu which was just too bland to justify me giving this place a four-star rating. I might go back again (in the winter for that soup), but with so many Chinese restaurants (and my beloved H-Mart) up that way, I may have to pass it by. Still, a solid 3.5 out of 5 stars is awarded.

That tofu looks killer. Too bad it didn’t pack a punch.

I was excited when it arrived. Even the menu gave it 2 chili peppers, which is their hottest level. I asked for extra beyond that and it was a little more than mild.

My phone is all botched up.

@joonjoon can help. He eats in Edison. I rarely get there. I can’t even edit my last post so sorry about that. Cool post and pics!

Sichuan cottage will hook it up. They make some spicy dishes and will get your mouth numb lol. If you ask for spice, they usually deliver. I think you have been there and know this already so I’m preaching to the choir.

That is what I want. I can count on one hand the amount of restaurants that have nearly killed me.

Have you tried Sichuan cottage? I’m a fan and so are quite a few people on here. I have a few NYC spots too, but I’m not an nyc Asian food expert by any means. I remember one spot I used to get those tofu pots at and it was great. I really don’t even like tofu much to be honest. However, this Manhattan taiwanese girl I used to date introduced me to a cool spot and I got into it.

No, I haven’t tried it yet. Have seen it mentioned here several times and is on my go-to list.

I would make this your next spot. Order off the back page of the menu. You will have a good time! Other members can recommend some favorite dishes.

I love the soup dumplings, dumplings in hot oil, cumin lamb and fish hot pot. Others will chime in soon

Hey! So yeah there are a few hotpot places now. I think you’re referring to Little Sheep which was the original, and that place is constantly packed with people. In the summer they have an AYCE option also. Personally their broth is a little heavy on the MSG for me but their quality is pretty solid overall.

@gcaggiano I’m surprised you didn’t like that mapo tofu, it looks pretty good in the pic! But as CJ mentioned, you gotta give it a go at a legit Sichuan place. There are a bunch in the Edison area, and Sichuan Cottage puts out a decent version as well. Mapo Tofu seems to be one of those dishes that vary quite considerably from place to place so it’s really a matter of finding your preference.

So yeah, Edison noodle house is pretty solid IMO, along with all the other similar noodle/dumpling shops in town. If you want to try some stranger items in a similar-ish setting, give Tasty Moment a try, it’s on the other side of RT1 on Old Post Rd.

BTW jellyfish is one of my favorite foods! Kudos for trying it out. I keep trying to get my friends to eat it but so far no one has really liked it.

I love that texture!

Yeah Sichuan Cottage is an absolute local gem man. If I had to keep just one Asian place from Monmouth county it would probably be this one.

As far as what’s good… everything!

I’ve actually never had soup dumplings here, I would feel like I’m cheating on Shanghai Bun. I’m particularly fond of the fish with bean sauce. 924 on the menu I think. We should have a HOdown here and only order things we haven’t tried before!

Just say when!!! LOVE Sichuan Cottage. There are a few others on here who would probably drop what they’re doing for a meetup as well…

But if we had ten people, how many dishes would there be that no one had tried before?

I bet we could find 10 dishes no one has tried. I mean I think there are at least a couple that don’t even have a name of the menu…

I will certainly try anything. Order up!

Did you really just say that? Because it’s NO challenge…it’s ON. When??

Maybe you should take a survey regarding what dates and times work best for people.

Also a survey of which dishes everyone has had, hasn’t had, wants to try, doesn’t want to try, tried and liked, tried and didn’t like, tried but don’t know the name because the menu omits the name in english and finally preferences on different levels of spice using both linear and logarithmic scales.

Do they ever have frog legs? I could get into some of those. It’s been a while.

I don’t think so. I believe the unnamed menu items are intestine and maybe rabbit but I forget.