Edis of Ely, Cambs. End of an era? 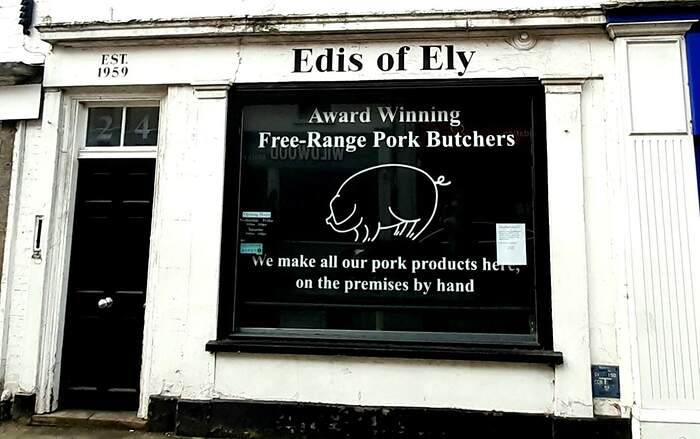 Edis of Ely , definitely qualifies as a local institution. At Christmas the queues are down the street.

I no longer live in Ely, but I grew up there and have recently been visiting my mother, where she told me of its predicament.

It’s been a local fixture for over 60 years. It’s where I had my first brawn. It’s where my mum got my haslet for my school packed lunches and where she bought sausage meat for sausage rolls. It also sells the renound ( well locally) Newmarket sausages

It’s been closed for while now refurbishment. It is though in a Grade II listed building, close to Ely Cathedral. The council and owners are at an impasse, re the alterations and according to my mother , it won’t reopen. I’m hoping a compromise can be reached. If not I hope this is a fitting tribute for the type of place we need to keep hold of.

That’s a shame. I don’t think I’ve ever come across a pork butcher.

They were quite common at the time of the Great War - many run by people of German heritage. This was obviously not a good time to be German in the UK and many premises were attacked and looted after the sinking of the Lusitania. It prompted one butcher in Stockport to change his name to Simpson - the company traded as Simpsons Sausages until about 20 years back