Before Dahlias became “flowers”, they were first raised for their edible tubers. Dahlias are very closely related to “Sunchokes” a.k.a. Jerusalem Artichokes, Yacon, and other sunflowers which make edible tubers. When I say “edible”, that does not necessarily mean digestible! These sunflower relatives have a polysaccharide called inulin, which can taste somewhat sweet, but can’t be digested by humans. So, these foods are safe for diabetics and those who need to watch their blood sugar levels. All should be eaten in moderation until your body gets used to the unusual food. Otherwise, symptoms of indigestion can occur.

Dahlias were often grown as food in Mexico and Central America, and that’s what Europeans originally had in mind. However, the discovery of potatoes happened about the time that a double-flowered Dahlia was bred. Potatoes taste better; Dahlias were lovelier, and the plants were assigned to different purposes.

I’m growing what is called “Pineapple Dahlia”, an old edible heirloom with simple red flowers. Supposedly, the tubers can have a pineapple flavor. I have not detected this yet. Here’s the plant:

The flowers are lovely! 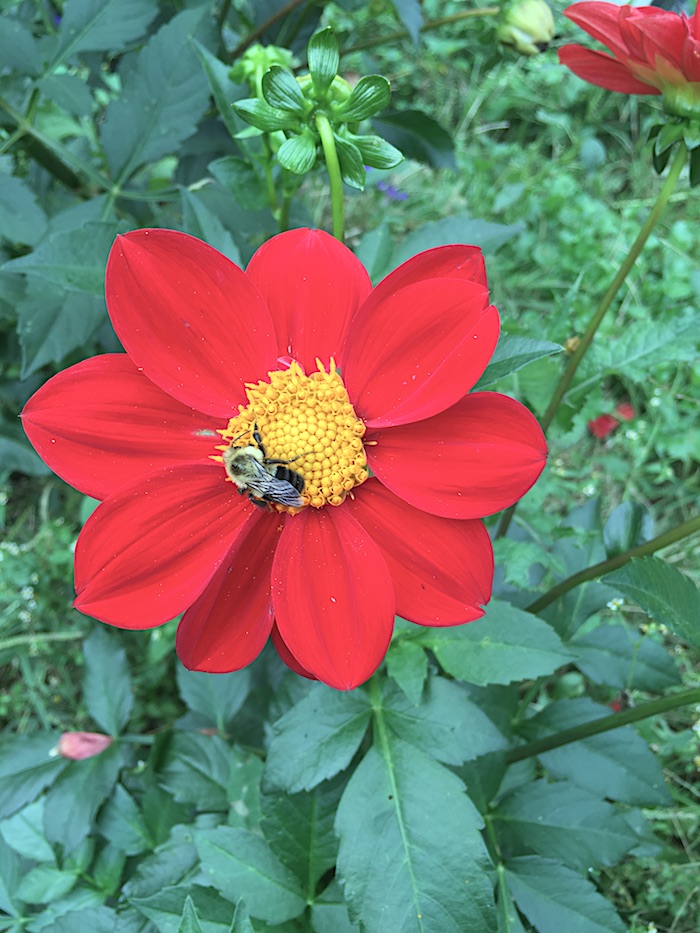 I dug a young, pale tuber and scrubbed it before tasting it. 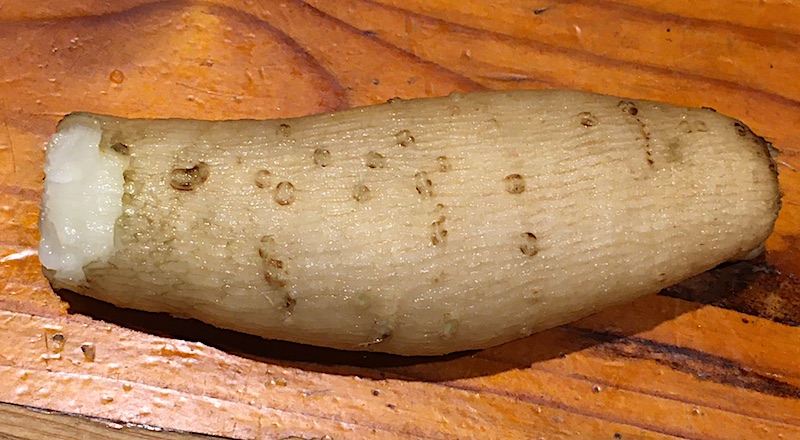 It was pleasant, nutty and sweet. Did it taste remotely of pineapple? No. I put some in the fridge to see if the fruity flavor develops. In any case, it’s an unusual addition to the vegetable garden.

Do you know what kind of climate they prefer? I don’t see them around here (Nor Cal) much.

This Dahlia, seems to be pretty rugged as Dahlias go. It tolerated mid to upper 90s F, humidity, low 40s. Ideally, they get warm days and cool nights, but it seems not too picky. They like a lot of sun and most of the time, benefit from staking or tomato cages.

I should be able to send you a start, tuber next spring, if they store successfully and you’d like to try one. However, you may need to email me at my gmail account to provide your address again. I’m sure it’s buried in some older email, but it might be on a different computer. Anyway, just put rob.botanique in front of the at symbol and gmail.com. No charge, of course!

Once I dig the plants, I’ll try to take a picture of the tuber clusters, which can get quite large. The Dahlias’ stems are thick as a broomstick. This variety was obtained through the Seed Savers Exchange.

My neighbours plant them, for the decorative flowers of course. I saw they have a few flowers in late spring, compound petals than the one you’ve showed above. Are all of them edible?

To my knowledge, all Dahlias are edible. However, none should be eaten if they’ve been treated with systemic pesticides. Peeling the skin is also necessary. Apparently, there are a lot of possible flavors, but I’ll need to contact growers breeding in this area to learn more.

Some varieties do not make massive enough tubers to be worth using as food.

Here’s an excellent article on edible Dahlias. It echoes my warning about consuming too much inulin. It’s not toxic, but can cause various indigestion symptoms, so folks need to try a little at a time. Your gut microbes can digest it just fine! Apparently, as the tubers age, some of the inulin converts to fructose, which is digestible. The inulin issue is also in Jerusalem Artichokes and Yacon. Boiling inulin in an acidic liquid might convert it to fructose, making the dish sweeter. I’ll have to experiment.

Thank you, and happy to send info again! I’m guessing they can bemanaged in containers, but how about hot dry climates and clay soil? I’m just wondering why I don’t see them much.

Shrinkrap, hot dry and clay soil doesn’t sound good for any tuber! Large pots should work fine, and I’m guessing 5+ gallon pots will be needed. Dahlias like very good drainage, so a good dose of perlite in the soil should help. Also, no saucers under the pots; that could start rot.

You might need to give them a little shade, since CA sun is very hot. They didn’t flinch with days here in the 90s. The cooler you can keep the root zone, the better. Maybe plant a decorative ground cover with shallow roots, to shade and cool the surface, like Dichondra Silver Falls. A light-colored pot should help.

You never know until you try! This variety is old and not highly bred for flowers. It appears to be Dahlia coccinea. Maybe it’s tougher.

Along with other frost-prep harvesting, it was time to dig up the Dahlia plants and take a gander at the roots. The plants did very well, with stems almost 2 inches thick. The roots were like small-medium sweet potatoes. 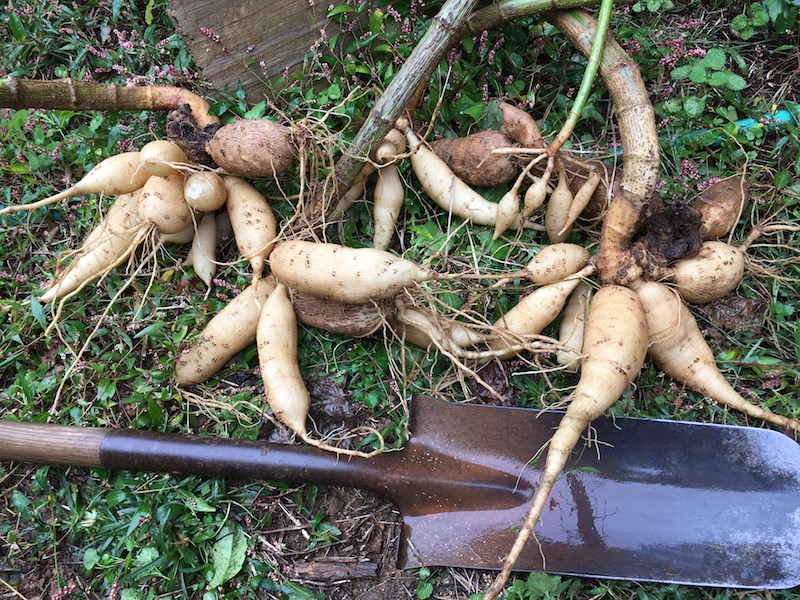 The white, thin-skinned roots are this year’s growth. As they age, they’ll get a thicker skin, which needs peeling if one is going to eat them. 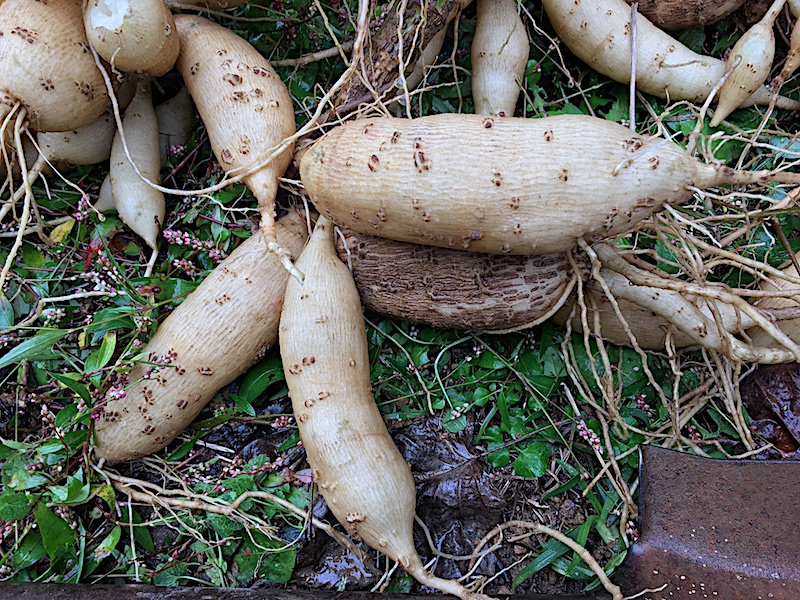 These are properly roots, not tubers, since the storage roots do not have buds and can’t be called a rhizome (an underground stem); a tuber is a swollen storage rhizome, like a potato.