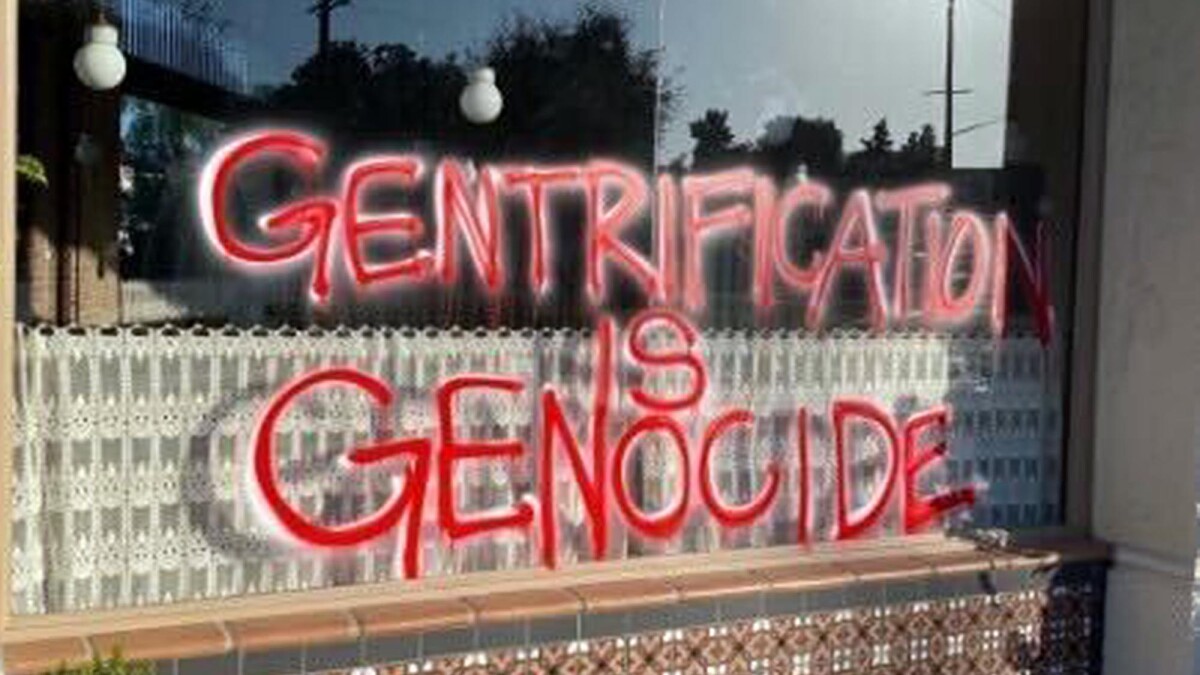 This L.A. restaurant was excited to open. Then the graffiti and protests...

Dunsmoor, an upscale new restaurant in L.A.'s Glassell Park neighborhood, was hit with protests and “Gentrification Is Genocide” graffiti on opening day.

Chef featured in high on the hog with the dinners and techniques commemorating James Hemmings.

People are so stupid.

Evolution has failed us. Obviously.

The location was essentially vacant for decades per the article. It’s an investment in the neighborhood. I never got to go to Hatchet Hall - I’d like to try it out.

Not everyone owns property, in fact most do not, so while property value increases do benefit homeowners, many longtime residents are set to be priced out. This can and should be considered violence, because often developers swoop in around this time hedging bets on neighborhoods and many cannot live there any longer.

I doubt any of the people at this protest are the homeowners seeing their property values increasing. Hence, not stupid. Protecting your family and your community is not fucking stupid.

My personal feelings are protests and picketing are fair game but the property damage is not and undermines the legitimate points of other folks.

I agree that property damage is not great in a vacuum, but unfortunately this does not exist in a vacuum. A lot of what is happening during gentrification is violent, and is violence directly on people… graffiti should be measured against that, not against a zero starting point, if that makes sense. I wish someone who was there and lives there and is living through that violence could comment here because it is important to listen to them. Their voices are out there if any are interested to follow up.

Yes I believe this will be an ongoing news story to follow.

This can and should be considered violence

A lot of what is happening during gentrification is violent, and is violence directly on people…

living through that violence

I’m sorry, I may have missed it, but specifically what acts of violence were committed by the opening of this restaurant Dunsmoor?

If I were to link to an article or two, what inevitably happens in a discussion like this is that the source will be questioned, or another article written at that source that is dubious will be compared, etc… So what I would suggest if you truly care about how gentrification is violent, is to do a quick search for “gentrification is violence” and choose what you would like to read. Revitalizing a space that has been vacant for decades, hiring locals, owners/management local, plans for a children’s garden doesn’t speak violence to me. The opposite. I am also very interested in the historically minded approach to food which is serving more than a dinner, it’s thoughtful and educational to a degree, homage to enslaved people as well in a significant way at least what I saw of the chef on high on the hog. @BradFord 's point is what did Dunsmoor restaurant do that was violence? It isn’t the predatory landlord of any displaced tenant. Surely there are other corporate restaurant groups that do have more culpability for having actually taken space of former renters ie around the soon to be renamed again crypto.com arena. I’m interested in listening and respect the voices of others. I can also say that I might feel physically intimidated like the folks that had their food packed up and left. That plus the property damage can be undermining of valid fears. It seems from your article and the latimes piece that there’s a want to be constructive not destructive on the part of the restaurant. I am glad this is making the news and hope good can come from it. I look forward to being able to try that spot out on a special occasion and learning about a neighborhood I haven’t explored and don’t know a lot about.

doesn’t speak violence to me

This sort of goes to my point about trying to see this through a different lens. This restaurant opening can certainly be framed in a history-less world and seem to be for the greater good, but it is pushing the needle on a neighborhood that wants to resist that push. The people involved in the restaurant probably do not have bad intentions, we can agree on that, but sometimes that is not enough. The chef’s previous restaurant did not see community push back, and this push back is not because he is a bad person.

I’m interested in listening and respect the voices of others.

This has been a surprisingly pleasant discussion, I often regret getting involved in things like this because when you can’t see people’s faces it often devolves with disrespect. I think this is the end of it on this thread though, just know those protesters have a longer history in their life than just one night and what has lead them to this point is important to be open to… whether eventually agreeing or disagreeing with their tactics. If there was no spray paint on the windows and no picketers during dining service, none of the “valid fears” would have been listened to in the first place.

Thank you; I’m looking into some articles now.

In the meantime, what I gather is that the term “violence” is being used metaphorically, as there’s no evidence of the people behind Dunsmoor committing any acts of actual violence, i.e. use of harmful physical force. I respectfully disagree with the characterization of violence so far, though, I would be open to discussing the concept that perhaps “gentrification may have negative unintended consequences for the very communities they inhabit.”

In the LA Times article, the Dunsmoor hospitality consultant / sommelier Taylor Parsons says “We all live here, close by.” Assuming that he isn’t lying, and rather that the Dunsmoor team actually are locals…if opening Dunsmoor in Glassell Park is somehow wrong, then is the fault with

I’m not trying to be sarcastic; I’m trying to understand the contours of what others think is permissible to be cooked where.

He has a rather unique culinary point of view in Los Angeles. I wonder what other stories of historical foods would be interesting to tell, and who are the proper stewards of those culinary traditions.

What’s being cooked there (dishes at those prices)?

Photo of a person holding a picket sign that read “Fuck your $23 lentils”. It’s a complex situation.

“The irony of all of this is that Brian and I are not multimillionaire restaurant fat cats,” says Taylor Parsons, a managing partner at Dunsmoor. “We are young people who rent their homes and work really hard in small businesses.” Parsons resides in Glassell Park, while Dunsmoor lives in Pasadena but plans to move closer to the restaurant once his current lease is finished.

Not sure what’s worse.

Letting a vacant building deterioriate so that property values remain depressed and the vibe and character of the neighborhood remains status quo?

Or, revitalizing an unused space to bring in jobs and tax revenue to the city, increase property values and perhaps change the vibe and character of the neighborhood?

Not sure what’s worse (or better).

Yes, there will always be those who are “hurt” by whatever path we choose. If No. 1, then those property owners never get to realize their returns on investment or their investment in their neighborhood.

If we choose option No. 2, then those who are not owners or stakeholders in the community are priced-out.

I dunno, I generally think a rising tide lifts all.

Yes, some may drown when the water rises, but that’s life I suppose.

Not sure what’s worse

For me it using the word genocide what other stories of historical foods would be interesting to tell,

Also related to high on the hog, it was fascinating and inexpensive to cook up a batch of Carolina Gold rice that was brought over from Africa in the 1600s, cultivated by enslaved Africans in the Carolinas, and then went sorta extinct here in the early 20th century before being brought back to life from a seed bank. Incidentally it is really good stuff as noted by @Chowseeker1999 talking about Angry Egret. Cooking and eating this was an experience that resonated. 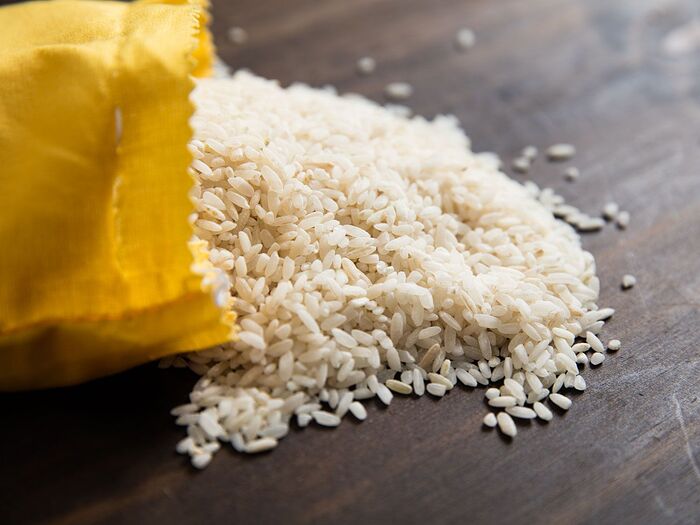 Due in large part to Glenn Roberts of Anson Mills, a Georgia optometrist, and several members of what's known as the Carolina Gold Rice Foundation (yes, that exists), Carolina Gold rice is back, allowing a new generation of home cooks to experience...

I’m really interested in what Dunsmoor is doing no matter his background and I admire that he is following his interest and sharing something more than just something that is tasty.

I hope to try out this spot and wish him success.

I’ve had the “Charleston Ice Cream” / Carolina Gold Rice in a Sean Brock dish of a “low-country oyster stew.” Incidentally, I was talking with someone about Dunsmoor today and comparisons to Sean Brock came up. Thanks for the link and I agree. Interested in more “lost” cuisines or dishes.

somehow my fingers deleted my post…too much rice!

I bet that was a fine stew. I assume you may have seen the high on the hog series on Netflix. I loved it and more episodes coming. I’d also be eager to learn more about lost cuisines and ingredients. Putting that rice in my mouth was a deep learning experience that I don’t take lightly. Not exactly brought back from extinction, but another inexpensive but fascinating drink for me is the aztec hot chocolate. Food for thought…

I generally think a rising tide lifts all

Yes, some may drown when the water rises

Regardless of what one thinks of gentrification, both those situations obvious cannot exist simultaneously.

Whether that is “good” or “bad” overall is a different issue. But one cannot have their cake and eat it, too.