Xiao Long Bao- thin skin, very fresh pork, made right in front of diners before going into the steamer, delicately made.

various dumplings- already trail XLB by a mile. though they are still nice, but the filling is salty.

Most menu items other than XLB. We usually find ourselves there ordering 3 trays of XLBs, a tray of dumpling and nothing else.

I Dumpling strength: (based on one visit)

Dumplings are better made than Panda, less salty. Much cheaper $6 for 12. vs $8 for 10 at Panda. I’d love to explore more of their noodle menu. Its great chewing on the tasty gelatinous tendons in the beef tendon noodle soup. the noodle was a little soft. broth had no MSG and the meaty taste seemed to come from beef stock. Their price overall is quite cheap, especially for RWC.

XLB- not their strong suit. Go to Panda instead.

Conclusion:
Go for good value variety like dumpling and noodle at I Dumpling, and satisfy the XLB craving at Panda.

Thanks for the overview!

Which dumplings do you like at Panda Dumpling? The ji-cai (sheperd’s purse) wontons are pretty good.

We usually get the shrimp dumpling.

Funny story. This week GF said “I want to go to Panda Dumpling, but the new jazz club is next door, and the chances are large we’ll get sucked in and have a few beers, but you’re feeling under the weather and I have work to do”. I think we ended up at Left Bank.

Nice report, and accurate to my taste.

I was a little curious last week at Panda so I counted- their XLBs have 18 pleats. Not that it really matters to me.

Tip 1: You can do a half and half beef tendon/ stew noodle soup if you can’t decide between the two. Yum. They said the noodle is hand shaved in house, though I am not sure.

Tip 2: try the Pork Dumpling with fennel (think its dill). not seen often around the bay area. It adds a very distinct and sharp herbal taste to the dumpling. 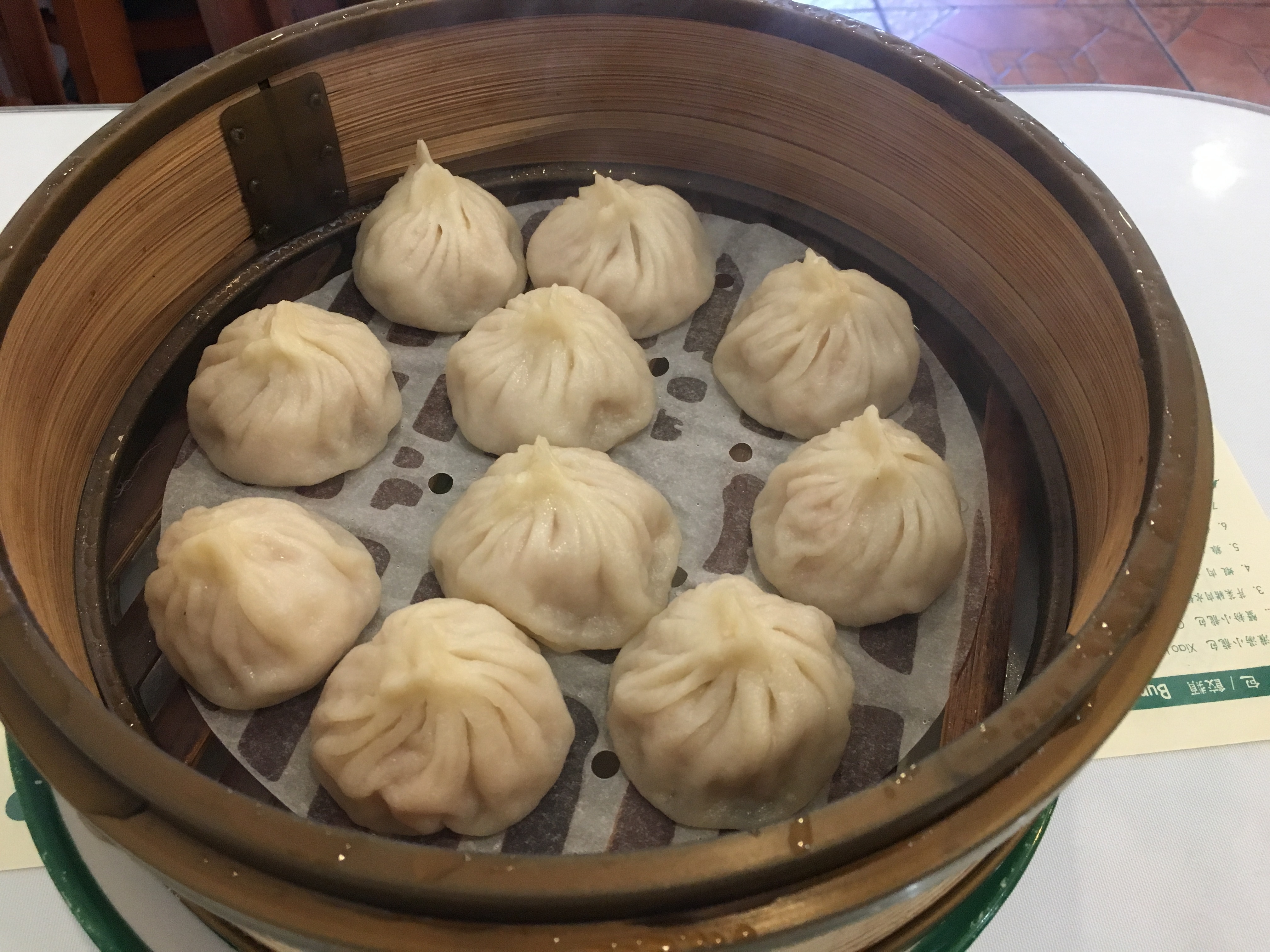 I got waylaid in San Carlos, and decided to follow up on your posts about panda dumpling’s XLB.

They are consistent, well constructed and very tasty. They are bigger than I was expecting, but well proportioned.

The server told me that the owner is from Northeast China, Harbin, and learned to make XLB in the US. She said that the Northeast specialties are the dumplings and two clay pot dishes, one of which was made with pork chop, and that the salty rather than sweet characteristic of the XLB suggests a more northern influence than Shanghai.

Based on your review, I think I probably will like I Dumpling better.

Thanks for the report. The picture on the right, from their web site, seems to show the pork chop clay pot. Interesting we were never recommended this dish…

The owner’s husband came from Canton, hence the Cantonese dishes on the menu.

My wife reminded me that we had the claypot in the past. My comment at the time was apparently that it wasn’t as fragrant as e.g. Cantonese or Japanese claypot.

I Dumpling’s pickled vegetable and pork noodle soup was disappointing. Pickled vegetable was one dimensional salty and not aromatic and the pork was cut too thick and overcooked.

Pickled vegetable was one dimensional salty and not aromatic

But maybe you are not judging in the eyes of the Northern dumplings? Just a possibility?

Its a noodle soup though.

By the way - Panda closes promptly at 9pm, which means they’re surly staring at 8:30, and they won’t seat you at 8:45 and the place is locked and dark promptly at 9pm. You can still get a take-out at 8:45 - although surly.

With Savanna Jazz two doors down, you can get take-out from Panda and eat it at Savanna Jazz. This week we got a heap of XLB and chomped it in the back of the jazz lounge listening to some great stuff. SJ does have a small kitchen, but the owners are relaxed about people bringing in food (the owner’s name is Pascal and I forget his wife’s name). They know they have a small kitchen that’s not a destination - people come for the music, and they have a high cover charge and drinks are on the pricy side. Between the pizza place next door and Panda on the other side, I do love me some jazz and good food. The pizza place is great - just say you’re ordering for the bar, and they’ll hustle your pizza over when it’s ready.

Tip 2: try the Pork Dumpling with fennel (think its dill). not seen often around the bay area. It adds a very distinct and sharp herbal taste to the dumpling.

After trying a few dumplings at I Dumpling, we both like the pork dumpling with napa cabbage the most. Fresh pork, laid back and nuanced filling with a little bit of pop from the ginger. Its also recommended by the server.

Pickled vegetable was one dimensional salty and not aromatic

But maybe you are not judging in the eyes of the Northern dumplings? Just a possibility?

Yeah I am not really sure how its supposed to be over there. I know the Koreans value complexity in their kimchee, so by extension I would think they would look for similar qualities in pickled vegetables in Northern China, but I am speculating.