I don’t think donuts were ever the subject of DOTM, but I greatly enjoy them as much as any of the high-brow breakfast pastries. This post started with my visit to Donut Savant, an Oakland donut shop specializing in donut holes, miniature donuts, and other breakfast sweets. Then last week my husband picked up some donuts from Johnny Donuts based in Marin, of course I started comparing them, and then I began reminiscing about all the great donuts out there.

First, I really enjoyed the donuts from Donut Savant especially the boston cream donut. The cream is smooth and eclair worthy. Their donuts are small and $2 each, which will drive some people away. The Johnny’s donut seemed supersize in comparison, but unfortunately the cream and the chocolate glaze were inferior.

Also in Oakland, Donut Dolly is delicious, with the classic naughty cream being my favorite of the 10 or so flavors I have tried. But sometimes I want a cake donut or an unfilled donut.

Back when I was living in SF, Dynamo was my favorite for their chocolate spice donut. I wasn’t a huge fan of the other donuts despite their popularity.

Bob’s in Russian hill was also a great classic donut place, though not really destination worthy. To round out the classic donut offerings in the Bay Area, I would like to import Top Pot from Seattle and Donut Man from Glendora (SoCal), both of which are tops in the classic donut department in my opinion.

Which shop makes your favorite donuts? I would love to try them.

1 Like
This Berkeley-based documentary project tells the stories of California ‘donut kids’
sck October 16, 2015, 8:38am #2

Have you been to Stan’s at Santa Clara? I have not been, but people seem to have good things to say about them.

Looks like I need to do an Oakland donut crawl. I second the sentiment about Top Pot. Wish there was a branch here. I liked [SF] Eagle Donuts on Mission, but they closed. [SF] Jelly Donut on 24th & So. Van Ness is a good, old-fashioned place, and they give everyone freebies. Dynamo’s flavors don’t work for me. Husband calls them “those vegan donuts” despite my protestations that they aren’t vegan. Kid and I were excited to try Psycho Donuts [San Jose], but they were terrible and stale.

My import wish is VG Donuts in Cardiff-by-the-Sea, CA. My favorite.

Donuts could be a great DOTM. Suggest it includes other fried dough things.

@felice, you nailed it— donut dolly and donut savant are destination worthy. Bob’s is erratic depending on time of day/night but the best choice for classic style. I agree with @atomica about not liking dynamo’s flavors-- I flat out don’t like their cake doughnuts, and which they’d put their tasty yeast recipe to better use.

Wait! I totally forgot about [SF] Mr. Holmes Bakeshop. Those donuts are outstanding. They don’t call them donuts–can’t remember now what he calls them. But god, the ones with passion fruit filling . . .

I was never a donut person, in general it is too sweet for me.
But I have tried the donut from Outerlands Cafe in SF, it is decent,
it is light and good texture, theirs is simple classic one.
If someone here have tried the donuts in outerlands as well, do some comparison, I will have a good referenece point, decide if I should go for the recommendations mentioned here.

Fan of the classic Apple Fritter at any of the 24 hour Happy Doughnuts. Also the buttermilk bar, glazed. Seem to be the same at every Happy Doughnut. Lowbrow and tasty.

Last night I stopped at Psycho Doughnuts in San Jose. The doughnuts aren’t that good, really, but they’re fun, and I’m always stopping in near closing when they’re stale. May be better when fresh.

Pizzaiolo has a wonderful pumpkin spice doughnut, doughnut holes, and a small apple fritter with texture and composition more like a bombolino.

No, they are also stale at 10AM. #hmmcurious

I will have to try the Pizzaiolo donuts next time I’m there for bread. Their morning bun has always tempted me too much and I haven’t had a chance to try other items.

Homestead does a breakfast pastry/coffee cafe/wifi thing too. Their vanilla glazed raised donut was excellent. Reminds me of the Dynamo yeast dough that hyperbowler praised, but put to good use with a simple vanilla glaze that doesn’t make the donut too sweet. I usually scrape off half the glaze, but didn’t have to this time. I haven’t tried their other donuts, so can’t put it in the destination-worthy camp.

Tried that pumpkin spice donut, it was great! One of my favorite standard donuts is the crumb donut, and this was like a gourmet version.

Doughnut Dolly has a second location; behind he REI on San Pablo in Berkeley. Take the Gilman exit and bring them as gifts en route to Berkeley, etc.

They’re generous with the filling, and each yeast risen doughnut is filled to order with either regular or seasonal flavors. She had a rhubarb rose last weekend.

Any recommendations for exceptional “normal” donuts (glazed, cake, old-fashioned, buttermilk, apple fritters, etc…) in the area?
Happy Donuts and Dream Fluff donuts have been pretty solid , but are there any out there that shine over all others?

For novelty donuts (RIP Doughnut Dolly), apparently once in a blue moon, Cheeseboard will have donuts, the creation of which is a mystery since they don’t have a fryer?

I stopped looking for exceptional standard doughnuts and am happy with Happy Doughnuts, or Bobs when I can get to Polk at midnight.l. The funny thing about donuts is that the vast majority of places use the same industrial mixes or Bakemark supplied ingredients. – – that means variation from one place to another has more to do with them screwing something up or having different Baking schedules than one place doing something unique to improve the base. I’ve seen a few listicles about the best Bay Area doughnuts, and none acknowledge this. Bob’s might be the one exception.

That’s a really interesting article! It does suggest that there’s room to set yourself above the pack within the confines of the standard ingredients and processes.

Here’s an interesting piece about how donut boxes came to be pink, particularly in LA, with asides about Cambodian-owned donut shops and big donut supplier Bakemark through some previous ownership. 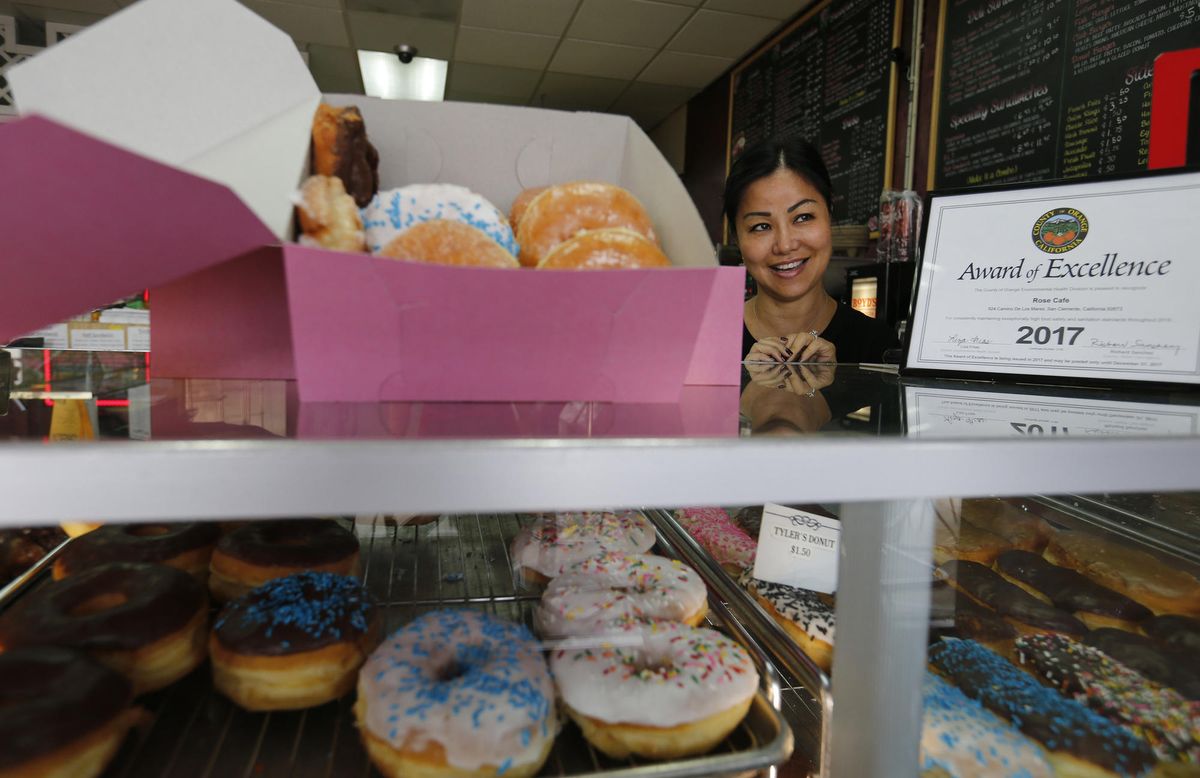 Why are doughnut boxes pink? The answer could only come out of Southern...

Everyone in Los Angeles knows what comes in a pink box: doughnuts. But the story behind those boxes is seldom told.