We went here on the basis of recommendations in That Other Site Which Shall Not be Named, and were reasonably pleased. (Well, I was more than Mark, though I don’t think he had any particular issues, just that he is not as keen on Korean food as I am.)

While we would have loved to try all the things recommended, we are not big eaters and could not take the leftovers home (for one thing, we were headed to a science fiction convention for the weekend). So we settled for a Dolsot Bibimbap for Mark and a Clam Soon Dubu for me (with tasting swap-offs). What distinguishes the Dolsot is the crispy rice at the bottom, which seems to be the same things as Puerto Rican “pagao” at the bottom of a pot of arroz con gandules.

I thought mine was okay though not very spicy (and I ordered a Level 4)–I probably would have preferred the Kimchee Jigae. Mark said the Dolsot was definitely better than the Dolsot in the non-defunct Lincroft restaurant had been–for one thing, the rice was much crispier. The prices at Dolsot House are the same all day, making them a bit higher for lunch, but cheaper for dinner, than what we have near us (Maru in East Brunswick).

One negative was the over-loud (non-Korean) pop music playing on the television.

We may come back here next year, or we may try one of the many other Korean places we saw in Cherry Hill. (Why do they have so many and we have only the one? Can’t they send us some in a CARE package or something?

Why do they have so many and we have only the one?

Good question. It’s got me thinking - maybe we could work a trade. Two, strip mall pizza places, a cupcake shop, and four daily badges to a beach of their choice (blackout dates may apply) for a good Korean restaurant and a Flyers cap?

We just returned here and Mark’s Calamari Dolsot had two problems: the calamari (squid) seemed to be octopus rather than squid, and we try to avoid eating octopus. The other was that the rice wasn’t crispy. When Mark mentioned that, the waitress seemed to be saying that is you want it crispy, you have to say so. (Joon Joon, is that true?)

We may try a different place next year.

Is this the place in the strip mall with the highly rated Chinese and Greek places? I think I ate there once a couple years back. I wish we had half the variety of Cherry hill in our area!

Hmm, I’ve never heard of anyone ordering their dolsot to be extra crispy, but I guess it wouldn’t be difficult for them to keep it on the fire another minute or two before bringing it out. The only thing I have to offer is to not mix the rice completely when you get it so that it can continue crisping while you get started. You don’t want to scrape at the layer of rice making contact with the bowl so that maximum crispness can be achieved.

You’re not the first person I’ve heard with complaints about Korean places mixing up octopus and squid. The only thing I can think of is to ask for it by name in Korean - squid is “Oh-jing-uh” and octo is “nakji.”

Yes, I think that’s the one (though we weren’t paying attention to the other restaurants very much).

He didn’t want it extra crispy; he said it wasn’t crispy at all.

We have also had the octopus-for-squid problem in other Korean restaurants (e.g., the now-defunct Lincroft restaurant). We’ll have to remember to order the squid in Korean in the future, though I am not convinced that that would actually do any good–they’ll serve what they have. The answer really seems to be not to order squid in a Korean restaurant at all.

I don’t know why anyone would serve octo over squid… squid is so much cheaper. I don’t get it.

At least if you order by the Korean word and you get the wrong thing, you’ll have more leverage in sending it back?

That “highly rated” Chinese place is Han Dynasty and I’ve eaten the wings at Dolsot House once when I also got some take out from HD. I thought they were pretty good.

One funny story about Han Dynasty is that the first time I tried to go to their website I forgot the space and found out that HandyNasty.com was an entirely different place.

Handy Nasty! Yes how could I forget. I remember really wanting to try that or Greek when I was there but peeps wanted Korean. I remember everything was decent at Dolsot, but nothing worth traveling for IMO.

Probably (hopefully!) we will be going here this week to dine in, but was wondering what we could order to go that would be good reheated the next day. Maybe the Spicy Pork Hoagie? Would Kimchi Jigae reheat well? Other suggestions?

Kimchi jjigae is one of those dishes a lot of people consider better the next day. In general I think most Korean foods do well the next day, any of the meats or soup/stewy things would fit that bill. Probably not a hoagie.

Did you end up going?

Current plan is for Thursday–waiting for a day with semi-decent weather and no scheduling conflicts.

Hope you enjoy!! I tend not to get stuff like kimchi jigs at a restaurant since it’s so easy to make at home. If it were me I’d probably get one of their combos or box sets. Also you can never go wrong with soondubu!

Kimchi jjigae is one of those dishes a lot of people consider better the next day. In general I think most Korean foods do well the next day, any of the meats or soup/stewy things would fit that bill. Probably not a hoagie.

If by “better the next day” you mean “takes the top of your head off”, this qualifies.

We went Friday and had wings and L.A. Kalbi Dolsot there. We ordered soy garlic wings, but the quantity of what looked like honey on the plate makes me think we got honey sesame instead. Still, they were good. We took two home–still tasty, but not crispy after reheating.

We also took about half the L.A. Dolsot home–I guess our appetites are not what they used to be. That’s probably lunch tomorrow or Tuesday (along with half the jigae which there was no way I could eat–I suspect Mark will get it). We also got a Kimchi Jigae and a Bulgogi hoagie, which seemed to re-heat okay. Maybe the bread would have been crispier the first time around, but it was perfectly acceptable.

Total with tax and tip was about $74, not bad for at least two meals for two people. They even gave us four small cups of banchan with the to-go items.

What are those white rubbery discs in the jigae? (I’m not criticizing them, just curious what they are–some sort of rice cake?) 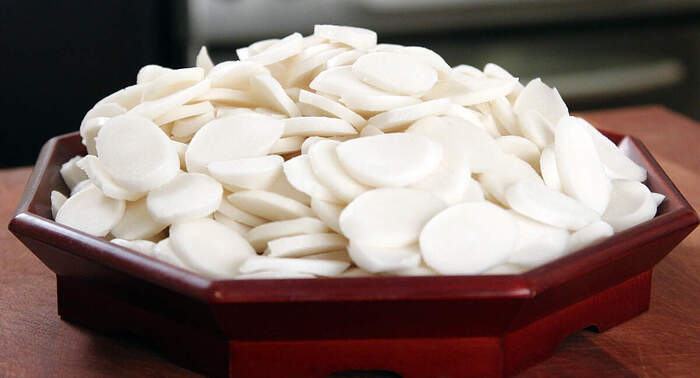 It’s like when we get take-out at Sichuan Cottage – we order three or four entrees, planning to get several meals out of them. Why waste a trip to a good restaurant on only one meal?