Does Jollibee make for a JollyMe? (open to find out more) Edison, NJ

About a month ago I was in the Edison area on business and while traversing the rt. 1 corridor north, I noticed a new occupant had taken over the beloved yet short lived Roy Rogers location. Not only did I notice the new occupants odd name; Jollibee, I also couldn’t miss the line of cars, spilling out into the right lane of rt. 1. Literally 20+ cars waiting in the drive thru line.

This ordeal made me want to see what Jollibee was all about so off to google I was, and all I can say is WOW…what an assortment of fast food;

This was so fascinating I privately nominated @seal to take one for the HO team, but as usual he failed me. So yesterday I was back in the area and decided to give them a try, well as the pictures below will show, there were still well over a dozen cars in line, two lines that actually that merged. The total wait was about 15-20 mins, which I really didn’t have to spare but I just couldn’t pull myself away from this place without giving it a try.

For as busy as they were the line moved and my order was ready in typical fast food manner. I imagine dining in must be an experience because you can tell they stress the “Jolly” portion of Jollibee. The worker at the window greeted me with an aggressive waive and a “Hello Jolly Day to you”… this was repeated once I received my food as well. I asked her how long they have been opened and she said 2 mos. I asked if it was always like this and that’s when I saw the sad eyes of an overworked fast food employee, peering out above her mask as she replied: " Yes, from opening to closing it never stops"…then with what I’m sure was a frown under her mask she waived and said; “Thank you have a Jolly day” and I was off.

I’m a moderate fried chicken fan, I enjoy it but I’m not going out of my way to get in line at Popeye’s etc. I do Popeye’s and KFC and would put them on the top of my fast food chicken list. I used to love Roy Rogers, but alas they are few and far between these days.

Onto the food! As you can see the chicken is nicely fried, they offer spicy so I oped for that. They put little “spicy” flags on the chicken to make sure you know. Wasn’t sure how to eat spaghetti as I drove, so fries were the safer choice. I also requested an up-charge for 1 piece of white meat, I was instructed they only carry dark meat.

Long story short, it was pretty meh, not really bad but not really good. I didn’t really care for the chicken. The spice was fine but overall it tasted like it was a spicy cheetos coating on it or something similar, nothing that really appealed to me at all. The fries were from the frozen bargain section of restaurant depot, the side of gravy was “ok” but after a few bites I noticed an odd flavor that I really think was sugar. It turned me off after the first few dips.

A pretty big let down, but perhaps I’m in the minority with my taste because they place is jam packed apparently every day. lol So who knows…don’t listen to me and go try for yourself and let me know what you think!! (though if you don’t like it you can’t blame me, I warned you!!!) 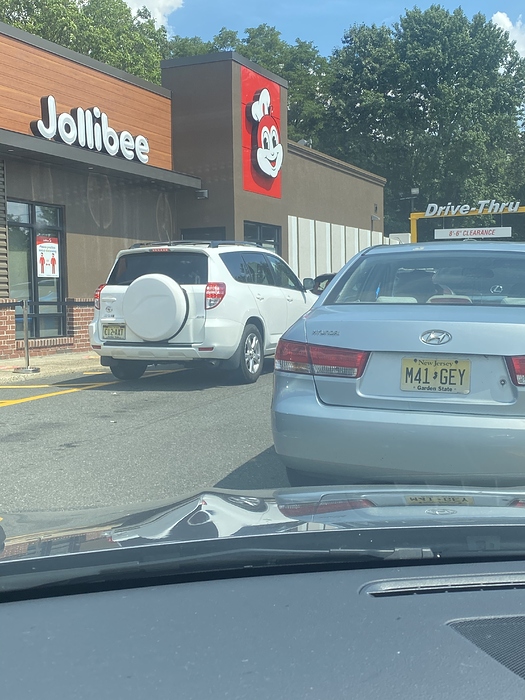 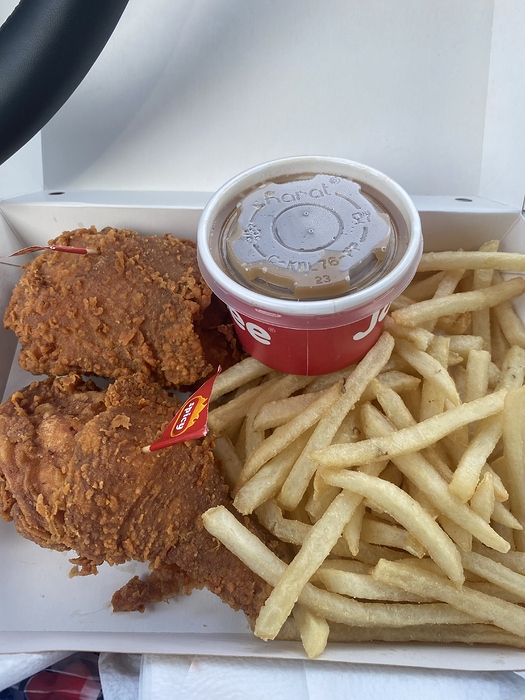 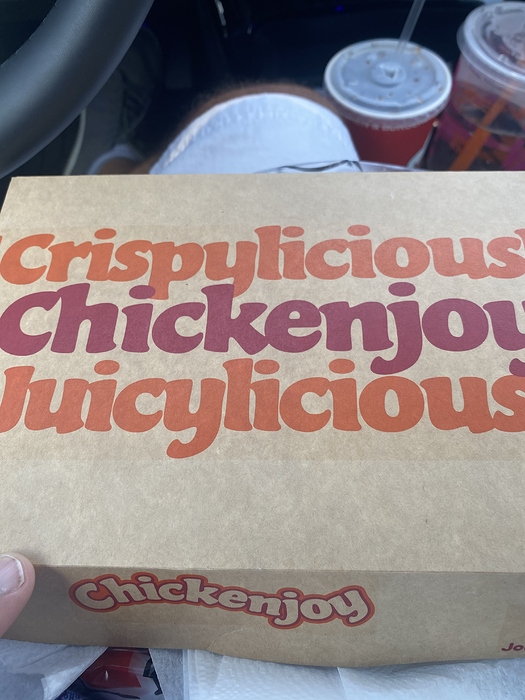 I privately nominated @seal to take one for the HO team, but as usual he failed me.

Lmao! I knew you couldn’t resist.

Seriously, with my daughter on a quest to try every pizza in NJ, I really don’t have time to be distracted by Jollibee. Besides, I like breasts and wings and they don’t serve those.

Thanks for the great review though!

This really is a great example of taking one for the team…thanks!

This is on my list to try since I love Filipino food and my Filipino friends talked about Jolibee with reverence before they ever opened in the USA.

I can’t believe you didn’t try the peach mango pie! 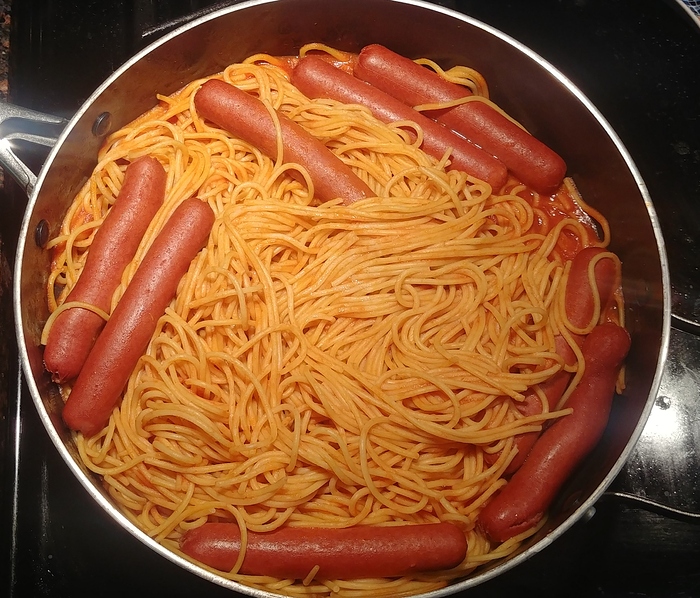 0000spaghettinhotdog2677×2289 1.18 MB
Really? Interesting…well I do hope the Filipino side of things is better than their fried chicken. Honestly I can only think of when a Filipino friend of mine prepared this and tried to pass it off as authentic Filipino dish, I think he was lying.
2 Likes
seal (David) July 23, 2020, 4:24pm #6

In the words of my Filipino brothers

I was back in the area on Monday, and right around 11:45 the line was not horrific at all. That said, after looking at the menu, I’m not sure I understand the hype. I will try their chicken and the burger looks interesting, but there is zero chance I’ll be twirling any of that spaghetti any time soon.

Please do and please do report back! I’m a bit fascinated by this place, even though I didn’t care for their chicken I’m still going to root for them!

Will be interesting to see if they can succeed at a location where others (Arby’s, Roy’s) failed.

They just opened up their 2nd location in Jersey City inside the Journal Square Path train station.

The Fung Bros take on Jollibee in LA: https://www.youtube.com/watch?v=OSux60v6jDo&t=120s

I have a haircut appointment in Edison at 10 AM, (no one in Hunterdon County knows how to cut Asian hair), and if done before 11 I plan to try the breakfast. 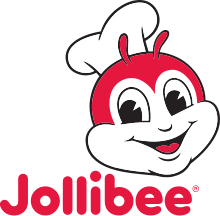 They also took ownership of Smashburger.

Aw, I’m a little sad you didn’t enjoy the food more. But I’m Filipino and I‘m sure nostalgia goes a long way in my thinking something is delicious. My standard order is Chickenjoy with rice (with gravy, of course) and a peach mango pie. Then I also get spaghetti and extra pies to go because a trip to Jollibee is special and I need to make sure I have enough for another meal

So just curious @tomt or @esjro or @anyone else has anyone given Jollibee a try yet?

I have not as of yet. Soon-ish

I did! It is half a mile from where I get my haircut, so during a mandatory vacation day (COVID cost savings!) I made an early appointment so I could get to Jollibee before the lunch rush. 11 AM was a good time to go: there was one car ahead of me when I got there, but by the time my order was filled cars were queueing up.

I wanted to try the spicy chicken and spaghetti. I didn’t study the menu before hand, so when it was my turn I got flustered and ordered the first thing I saw with both items, which turned out to be Bucket Treat B: 6 pieces of chicken, a family sized serving of spaghetti, and 3 mango peach pies. I also ordered a Pineapple Quencher for the long ride home. After paying, I was directed to a parking spot to wait for my order to be prepared. The order was brought after 5 minutes or so, and I was once again told to “have a jolly day.”

Deep fried pies are at their best when fresh, so I decided to eat one in the car. This was a mistake, and makes me understand why eating in the car can be a ticketable offense. I bit of a crispy corner of the pie, and it was good, so I took a bigger bite. When I took that big bite, a big blob of filling went into my mouth, but the liquid part squirted all over my shirt. That filling is HOT! My lip had a couple of small blisters later. It was delicious though, like the McDonalds pies before they started with that baking instead of frying BS. The combination of the pie and Pineapple Quencher is a LOT of sugar though: I got home in record time.

The spaghetti was surprisingly good. They put the sauce on top, so it is possible to adjust the pasta:sauce ratio to make it not so sweet. I like hotdogs, so didn’t mind the addition of them nor the shredded cheese.

The chicken is excellent. Unlike some chains (I’m looking at you, Popeye’s!) the pieces are large so 2 is sufficient for a meal. It was all dark meat, which I consider a positive. I ordered all spicy, and each piece had a little flag indicating that it was a spicy piece (as it is possible to get a mix). The breading was crispy and lighter than American fried chicken - I wonder if they use cornstarch, because the texture was similar to Korean fried chicken. It was also surprisingly spicy. (My friend who is Filipino said that her father went when they first opened and the chicken was not spicy compared to other locations. He called and complained, so I thank him for his activism!) My husband (who is from the south) said it was some of the best fried chicken he had ever had., and it was also good cold the next day.

It is a good thing that it is an hour away, or I would eat it more often than I should. The food did hold up remarkably well on the drive home though, so maybe it is worth a trip today…

Update: I did end up going there yesterday.

Got a 10 piece bucket and am still eating it. It is good cold, and still remarkably crispy. Also tried the adobo rice (as sadly they do not have garlic rice yet). It was kind of like a fried rice with bits of pork - not bad. The palabok fiesta is now available too. I liked it, but wish that there were more toppings (pork and egg) - it is mostly sauce with a few shrimp.

I just came from Jollibee after we helped Justin’s dad move (Edison area). Not the worst food I’ve ever had, just not my thing. Chicken was fine but that spaghetti was like a science experiment! Pics and review to come.