Besides our take-out favorites, we’ve had dinner out in restaurants three times.

The mid-peninsula has quite a few open-air dining spots. Three that we’ve hit are:

My understanding is Menlo Park downtown will shut to car traffic soon, probably for this coming weekend. The main drag - with left bank and others - will be fairly hopping, but it’s not as cheek-and-jowl as MV or PA. I don’t know whether Univ. Ave will be blocking off areas soon or not.

What are your stories? Where have you been?

I was told that University Avenue are now open to the pedestrians, just like California Avenue and restaurants will operate in the streets.

If so, hopefully that will keep some of the restaurants alive as they need some seriously help. Before the recent reopening I drove by University Avenue a few times during ‘peak’ eating hours. Its pretty dead every time. Its almost painful to look.

We still haven’t dined out since SIP. Though we have been getting takeouts. Let me post about those.

Far from PA/MP, here in Annapolis MD one of our major downtown streets is closed to traffic four afternoons and evenings each week. We used to have a restaurant festival once a year and the current closures are modeled on that for sidewalk and in-street dining.

We won’t be going.

Parking is a long walk down sidewalks and people just get too close. Too many people behaving poorly for us to feel safe even at widely spaced tables.

We are eating out about once a week, out doors. Last night was Union Local on University Ave. I chose it not because I love the food (“it’s fine”) but because it has a key location right in the middle of the block. The atmosphere was good, distances were well maintained. People did walk by on the street mostly 6 feet away, and mostly with masks but maybe about 50% to 60%.

Ramen Nagi still has a half hour wait.

Ramen Nagi still has a half hour wait.

I was at some point trying to see if Nagi does take out. But they don’t even have a phone number. Where are people sitting at Nagi, on the street?

SF Japantown has this “Picnic at the Plaza” thing going every Sat & Sun. We were there this past Sunday. We ordered from the wrong restaurant, but the experience was fun. Will pick the food more wisely next time. https://www.rafu.com/2020/07/picnic-at-the-plaza-in-japantown/

I see this question about Nagi. You queue in a line over by the alley by PAIX, sort of around the corner, and they have a set of tables. Every time so far, still a line. Now that you’ve got me thinking of Ramen, perhaps it’ll be orenichi over in RWC for lunch today, if they’ve organized outdoor seating.

Saw this outside the back of Terun today. Guy behind me and I were both amused by the sight. He commented that they also have a Rivian, in addition to this Maserati that does delivery. 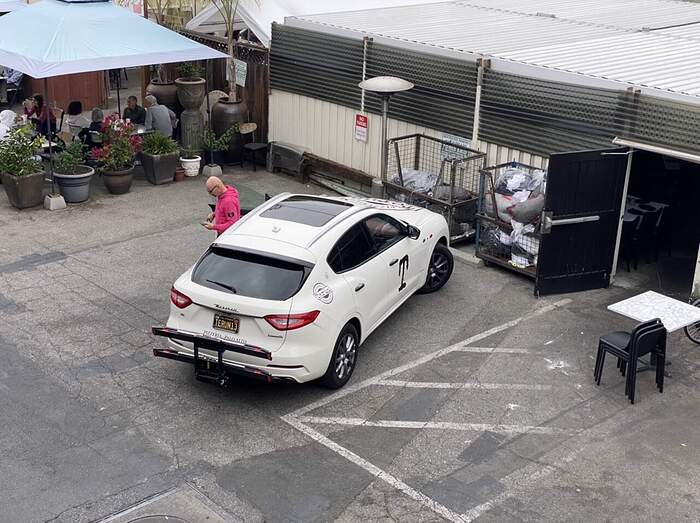 And it has a bike rack. Terun does some kind of bicycle sponsoring, at least you see their jerseys around here and there.

They only have indoor dining at Ramen Nagi that’s why the line is long!