Baity only opened a couple of nights ago and is, I believe, the first Palestinian restaurant in the metro area. It’s a small place with a bit of an air that opening had been rushed – minor, but obvious, issues hadn’t been sorted out. For example, the door to the single toilet needed to be refitted so it would actually shut; paint splashes needed cleaning off the floor – that sort of thing.

We love Middle Eastern food, often eating at Lebanese or Syrian restaurants, so we wanted to see what the menu had by way of distinctive Palestinian dishes. Well, the answer is not much. They’ve done the right thing in keeping to a short menu – around eight starters (or “small plates” as they’re fashionably described) and maybe six or so main courses. There’s only a couple of these that the owner mentioned were uniquely Palestinian, which was a bit of a disappointment.

All of the starters will be familiar to diners who have eaten at other Middle Eastern restaurants. We shared three of them. There was an excellent houmous (the owner later told us it was his recipe). Tabbouleh was OK but it was a bit wet – perhaps the parsley hadn’t been dried properly, but it meant that what was presumably intended as a quite lemony dressing was watered down. And mixed vegetables with sumac – fried potatoes, cauliflower and sliced aubergine, sprinkled with the spice. But it needed much more sumac. I’m almost sure the menu said it would come with a tahini sauce but my memory may not be perfect. Certainly it would have benefitted from it, had there been one.

For a main course, musakhan was one of the two distinct Palestinian dishes on the menu (the other is makluba which also originates from the Galilee, so no surprise that’s its migrated north and we’ve eaten it in Lebanese restaurants, like Yara in Cheadle). The plate is covered with a flatbread topped with a scattering of onion, tomato and sumac (?). That’s then topped with a couple of bone-in chicken pieces. It’s lovely moist chicken and it’s juices mingle with those of the onion and tomato to soften the bread. A little dish of yoghurt sauce adds nicely to the moistness. The other main was lamb sharwama (they also do chicken). It’s a generous portion of meat, served as a sandwich, folded into a flatbread and served with salad. There was another sauce (toum?) served separately.

It’s probably fair to say that the kitchen may not have got its feet properly under the table. With small menu and only eight diners in the room, it shouldn’t have taken as long as it did for the starters to come – and then the mains came while we were still eating them. So, there’s issues of timing, as well as the issues, albeit fairly minor, with the actual cooking. It’s early days but there is a fair amount of local competition from other Middle Eastern restaurants and Baity needs to get these matter sorted quickly.

the other is makluba which also originates from the Galilee

Coincidentally, I had chicken maklouba for dinner this evening at a Syrian restaurant. 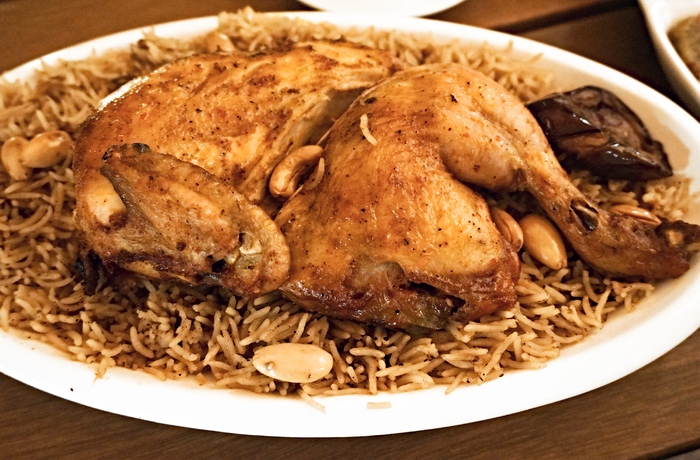 Toum tastes amazing! Though I’d suggest only eat it if the wife also agrees to, a sort of mutually assured destruction pact.

The food science is also amazing! How on earth does (yellow) olive oil whisked with minced garlic become fluffy and pure white like a cloud?

The best I’ve eaten was at a Lebanese place in Kew, a few years back, with a chicken kebab. Really garlicky.