Food theater is growing. Culinary celebrities are taking to stages and concert halls around the country bringing their own brand of food related entertainment. The Alton Brown Tour 2016: Eat Your Science, has been travelling across the country with his interactive show. Meanwhile, the Anthony Bourdain Tour 2016: The Hunger, more of a high powered discussion, question and answer type of performance, is also making waves coast to coast. Tickets can range from the 40s to the 100s of dollars. 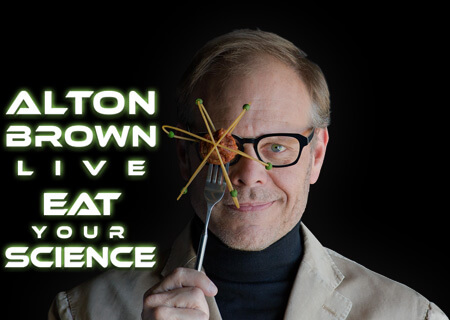 
www.anthonybourdaintour.com
I hear that Cook’s Illustrated has a show they are doing in the Boston area.
Have you been? Are you interested?
[France] Food, the new fantasy for the idiots.
Elsieb October 10, 2016, 7:01pm #2

To each his own, but…to pay that kind of price for viewing a ‘famous’ chef seems sad. Neither could keep my attention for a 30 min free tv show, much less to pay $100-500 for viewing. But, they must be filling the seats or it wouldn’t be happening.

The question is, what are they doing on the show that makes it $100-$400 more interesting than their TV show which most people can view for free after they pay for cable TV.

If I want to/ can spend that amount of money, I’d rather just have a nice expensive meal in town, and then come home to watch their show.

The question is, what are they doing on the show that makes it $100-$400 more interesting than their TV show which most people can view for free after they pay for cable TV.

If I want to/ can spend that amount of money, I’d rather just have a nice expensive meal in town, and then come home to watch their show.

Isn’t that like saying you won’t go to a play/show and pay for $$ tickets because you can catch it on TV or Netflix at home?

With shows and plays, there are benefits from being there- the experience is more immersive. You have a wider angle view, the sound effects are ‘surrounding’. For Bourdain, he obviously can’t bring the audience to foreign lands or cook everyone a meal, hence the original question of what he can do on stage to create an experience. Similarly for Brown, I imagine he can demo cooking and run experiments, is there something else interesting that they are planning?

Has anyone been to one of these shows?

Not to this series of shows exactly, but I have attended culinary speaking engagements: a couple of years ago we got tickets to The Bushnell Theater in Hartford, CT. to hear a live interview and discussion with ‘The Barefoot Contessa’, Ina Garten. She packed the house and did a book signing after. On another occasion, we got tickets to the 92nd St. Y here in Manhattan to hear an interview and discussion between Jacques Pepin and Chris Kimball. Quite a combo, and it turned out great…neither event was terribly pricey.

I got curious so I clicked the link. Here’s what the promo says:

"“Alton Brown Live: Eat Your Science”, the follow-up to the smash “Edible Inevitable” tour, will hit the road in 2017. Fans can expect more comedy, talk show antics, multimedia presentations and music (yes, he sings), but Brown is adding a slew of fresh ingredients including new puppets, songs and bigger and potentially more dangerous experiments. Brown has a knack for mixing together a perfect base of science, music and food into two hours of pure entertainment. Critics and fans rave about the interactive fun when Brown invites an audience member on stage to serve as his assistant. According to Alton, “there will be plenty of new therapy inducing opportunities during our audience participation segments. I don’t want to give too much away, but we’re also going to play a little game with the audience,” says Brown. "