Hi all! I’ve been working in Elizabeth for a few months and have been attempting to uncover the food scene here.

When I first started, I asked my coworkers where the lunch was at, and they kind of gave me a ghost-like expression implying they’d never left the office.

As I began to research more and more, I found it hard to really find anyone discussing the food scene in Elizabeth. I found a few fringe and outdated topics on various forums, but nothing really substantial.

I’ve since been trying to map out all of the food spots I’ve been meaning to try, and compiled them all in a google sheet spreadsheet by cuisine and by neighborhood in Elizabeth.

When it comes to cuisine, especially South American food, Elizabeth is quite expansive in offerings. There are 20+ Colombian restaurants, 20+ Peruvian restaurants, 20+ Portuguese restaurants, and plenty of others represented such as Uruguayan, Brazilian (nearby in Hillside), Venezuelan, Cuban, Mexican, Ecuadorian, and Caribbean/Central American countries as well.

Obviously it would be exhaustive for me to go into detail about all of them, but I thought I would post occasional updates about good feeds I’ve had, and recommendations if anyone ever happens to be in the area as they happen.

I’ll start with a short suggestion of a lunch I had the other day:
Alabrasa’s Cafe in Linden, NJ.
Venezualan
Known for their stuffed arepas, cachapas, and shredded beef and chicken dishes. I saw their menu online and on Facebook and saw some crazy creations such as the YoYo (deep fried sweet plaintain sandwich) and had to come and try.

I ended up ordering a Pernil YoYo, the bread layer is deep fried sweet plaintains, inside filled with pernil, two kinds of cheese, sauce, lettuce. It was incredible. 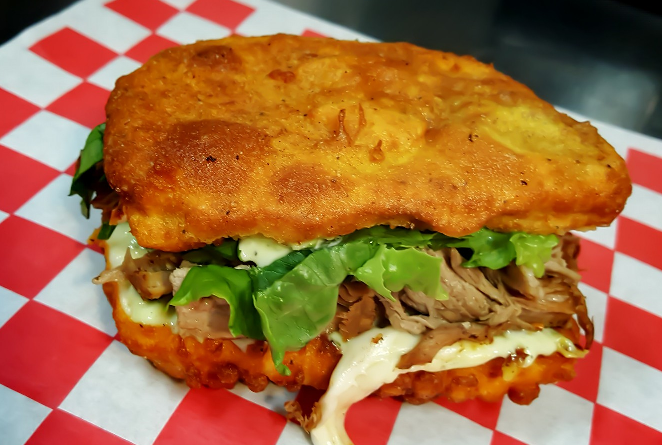 In Elizabeth, Yoly’s Cuban is very nice. I had their Bistec Palomilla with some croquetas and everything was tasty. Only been here once but very nice people and seems to be quality food.

Tommy’s for an Italian Hot dog.

Jerry’s for a dog with onions and chili.

Santillos for a great pizza.

Those are basically my 4 stops in Elizabeth.

Not on the same day though.

Yoly’s is awesome! Best medianoche I’ve had outside of Miami.

I can’t think of food worth checking out in Elizabeth without mentioning Spirito’s.
https://www.facebook.com/pages/Spiritos-Restaurant/102223626487764

The City Tavern is the best intro to Elizabeth dining IMHO. The make killer sangria azul, table side guac, and the best skirt steak on the planet, “entrana con cinco estrellas”…plus Latin delicacies and a fantastic burger served on an English muffin. The service is tops, the crowd is diverse and happy, and the jukebox spans the globe. It is a Sunday afternoon delight.

Awesome report goodparm! I too have been meaning to get my ass to Elizabeth for the ethnic eats, it looks like a great place for Latin and Caribbean food. Not Elizabeth, but I have been dying to check out White Rose in Linden, their sliders look awesome.

I’ll try to make my way up there more often and try some things out!

I’ll attempt to tackle Uruguayan cuisine in Elizabeth in this post. Given the decent sized population of Uruguayan immigrants in Elizabeth, there are around 7 places I’ve discovered.

Some of the locations are solely bakeries, some groceries, and some restaurants. Each location offers their own form of the Uruguayan staple: Bizcochos.

For the uninitiated, bizcochos are the main breakfast food/anytime snack in Uruguay and are made as varieties of the croissant. There are countless (20+) varieties and all have different fillings and textures (dulce de leche, apple, quince paste, cheese, ham, spinach, etc). Some are savory, some are sweet. All are delicious. 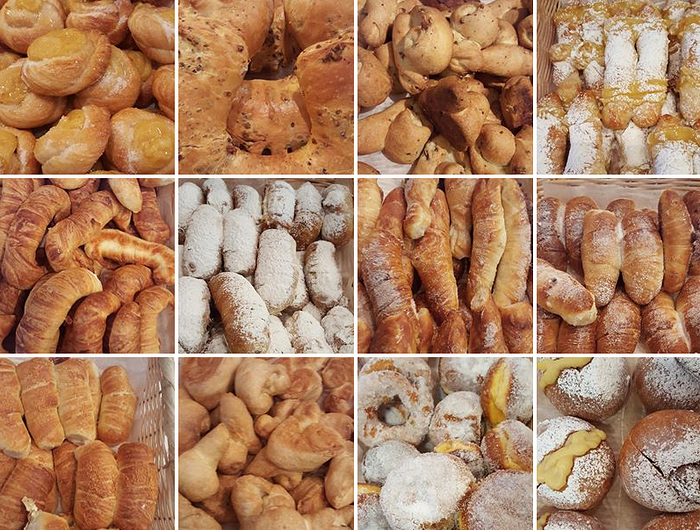 My favorite spot for bizcochos in Elizabeth (and I’ve tried them everywhere) are at Alkazar Bakery (https://www.yelp.com/biz/alkazar-bakery-elizabeth-2) near the Elizabethport area. I usually get a large cappacinno and get a few sweet bizcochos, the dulce de leche, margherita (custard filled), the membrillo filled (quince paste) are my favorites.

My favorite restaurant for typical Uruguayan cuisine in Elizabeth is La Estancia on Rahway Ave (https://www.yelp.com/biz/la-estancia-parrilada-pizzeria-elizabeth). Uruguayan food is most known for their Asado (BBQ), but a few of my favorite things to order there are: 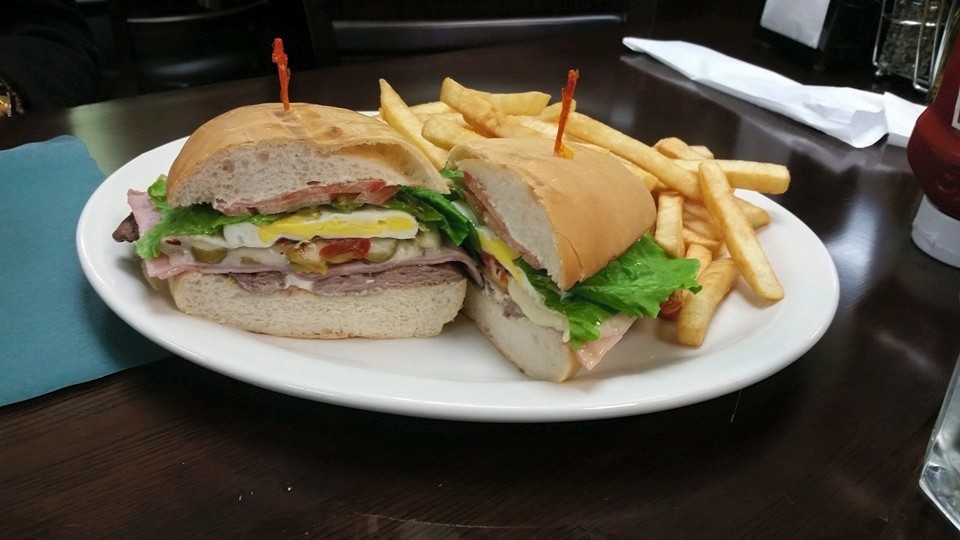 Uruguayan Pizza: Served by the meter, and with a variety of toppings. Often ordered with Faina (chickpea bread) and served on top of the pizza. 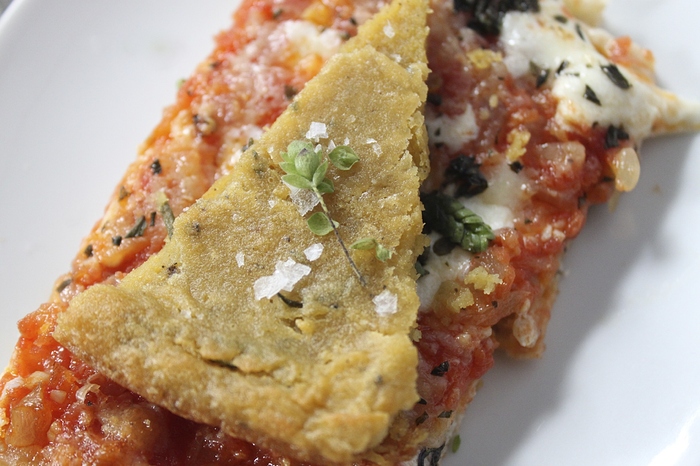 Shit GP, this is fucking awesome. I’m heading to Elizabeth as soon as I get back to NJ.

@goodparmesan Great post…thx. Are any of these spots (or others you’ve tried) in the vicinity of the courthouse?

Yoly’s is. It is on Elizabeth Ave and S Broad, like a block away from the courthouse. I can’t speak to the others.

The way that I’ve been choosing places/mapping them out has been categorized by cuisine and by neighborhood:

On my list, the ones closest to the court house/Midtown area are:
(Keep in mind there are many other restaurants, but my list only consists of ones I’ve chosen via interest by googling/research/reviews etc.)

Yolys: Cuban food, been there twice, and as thread also said, they are amazing. So far my favorite Cuban restaurant for sandwiches and traditional dishes.
Mr. Pan: Colombian bakery and restaurant for traditional Colombian dishes like Bandeja Paisa. This place was good but I’ve had better in town, that I’ll make in a seperate post.
Antojitos Y Mas: Colombian restaurant and bakery. I haven’t been here yet.
Cali Burger: Colombian street food and Colombian style burgers/cholado ice cream. Haven’t been here yet, but it looks very tasty.
City Tavern: As thread has said, one of the better Portuguese restaurants in Elizabeth and known for their skirt steak menu options.

Elizabeth is known for having a wide variety of Peruvian restaurants. I’ve ventured a few times to a newly opened spot in the Elizabethport area, called Puro Callao. 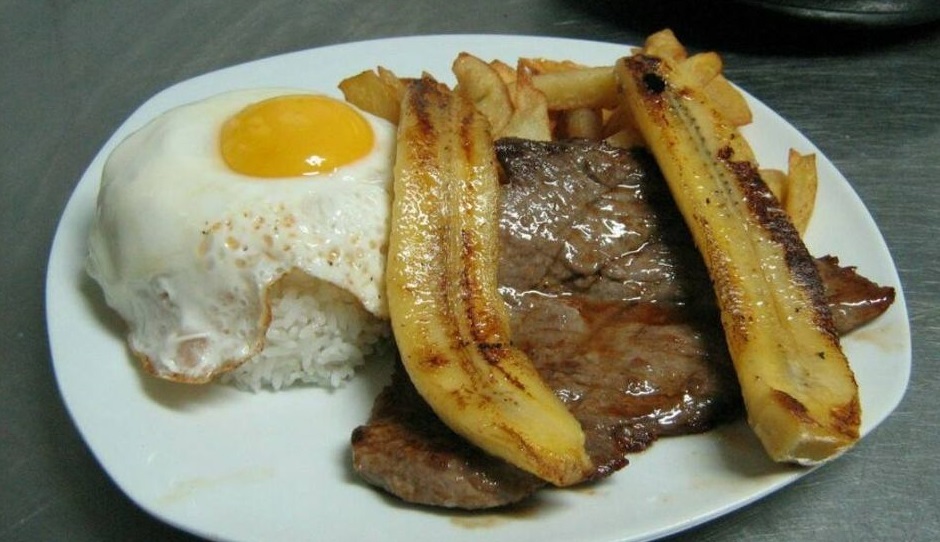 Other great dishes I’ve had are Lomo Saltado (beef stir fry, with onions, tomatos, served over fries and rice), and Parihuela (seafood soup similar to a gumbo with mussels, shrimp, flounder)

God damn I love steak and eggs and rice. You are my fucking hero!

I’m a huge fan of Brazilian food, and of course Rodizio style meats.

I’ve found that there being a small Brazilian population in nearby Hillside, NJ, that there are THREE Brazilian run places on one street (Liberty Ave) within walking distance and warranted multiple visits by me.

I ordered a meat pastel, coxinha (deep fried chicken croquette), and a Picanha sandwich, which in Brazilian sandwich fashion comes with a ton of fixings such as ham, mozzarella, potato stix, etc. 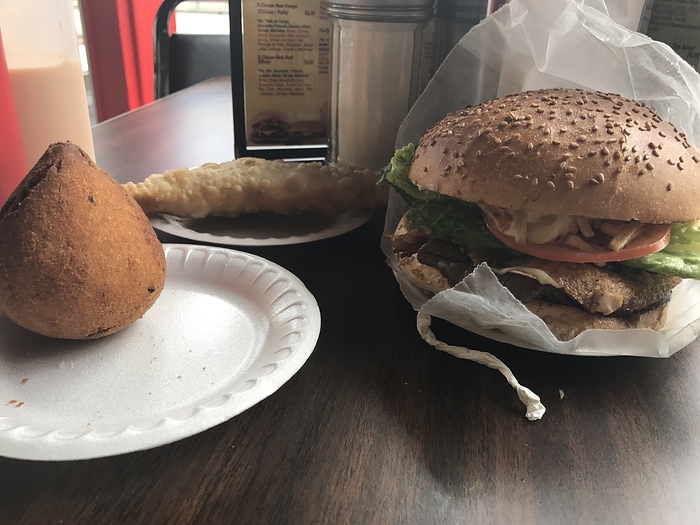 Pao De Mel Bakery: This is a bakery and deli, offering a multitude of Brazilian pastries and breads. They also make Brazilian style sandwiches/burgers similar to Sandubao Lanches. I haven’t ordered a sandwich from here yet, but they make delicious brigadeiros. (Rich chocolate balls similar to truffles).

Taste of Brazil: Small rodizio-style restaurant with similar setup to Sabor do Brasil in Long Branch, where you go up with a plate. $15 for all you can eat, can’t go wrong. The salad bar was a little lacking, but the meats satisfied. Had the picanha, pork ribs, chicken in garlic, chicken wings, pork sausage.

As far as Puerto Rican restaurants in Elizabeth, there are not many. There’s one on Elizabeth Ave. called El Palmar, but it appears to be a Cuban/Puerto Rican fusion.

However, over this past weekend, two opened up at once in the Elmora neighborhood area.
They are:
El Rinconcito Boricua Restaurant located at 335 Washington Ave, Elizabeth.

They appear to be “Kiosk” style Puerto Rican cuisine rather than sit-down restaurant style. Meaning many of their dishes are grill/mofongo-plates rather than traditional stews.

I went to El Rinconcito Boricua and ordered the Mofongo Relleno de Camarones, which consisted of shrimp, peppers, and onions, served over mofongo (smashed green plaintains). It was excellent. 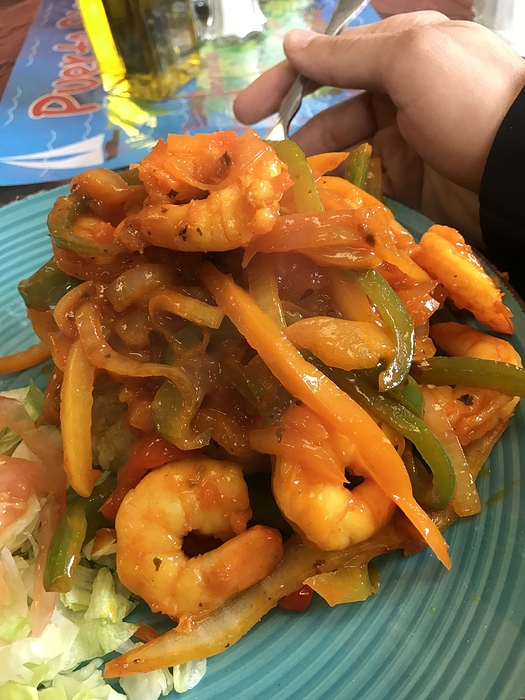 There are 3 Ecuadorian restaurants around Elizabeth. Today, I went to one Uptown called Balalaika El Consulado.

Balalaika El Consulado. 68 likes. Ecuadorian restaurant in Elizabeth NJ that specializes in typical Ecuadorian dishes. We cater, deliver, and allow our customers to reserve our location.

It was chicken breast and shrimp in a brown bechamel sauce. The sauce was awesome and mixed really well with the rice. 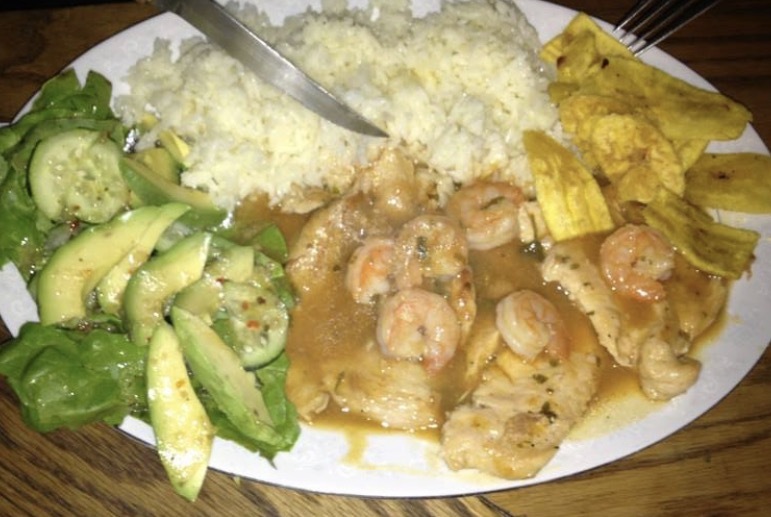 As far as I know, there’s only one Honduran restaurant I can find in Elizabeth. It’s located in the Midtown/Courthouse “Business District” area.

Aptly named, Honduras Restaurant. I went in and ordered the “pollo tabajas” which is fried chicken mixed together on a plate with green plaintains, a green chile sauce, white cheese, coleslaw, and cabbage. 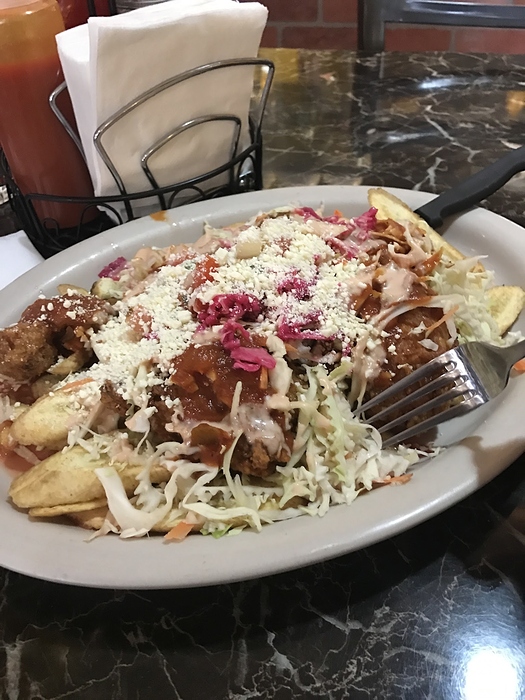 Went to an Ecuadorian restaurant today on Elizabeth Ave., Downtown, in the “Market District”

Called, La Tambora, they also have a location in Jersey City.

I opted for the Yapingacho (potato cakes), served with a peanut sauce, with roast pig (hornado), salad, egg, rice, fried plantains, and chorizo. 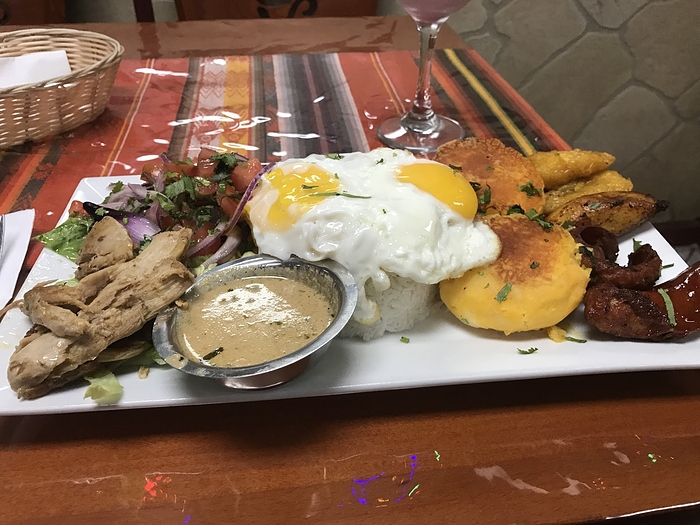 There are several Cuban restaurants in Elizabeth. Mainly on Elizabeth Ave. (such as Yoly’s mentioned earlier), but a new one recently opened that sets itself apart from the rest.

Specializing in Cuban-style pizza, La Tostano opened its doors a few months ago.

Cuban-style pizza refers to a type of deep-dish pizza, where the focus is more on the dough, sauce, and cheese rather than the toppings and typically eaten with knife and fork.

La Tostano offers a variety of pizza styles, as well as other Cuban street-food staples such as Cubano sandwiches, medianoches, croquettes, empanadas, and more.

La Tostano, Elizabeth, New Jersey. 325 likes. If you haven't try a Cuban style pizza you have to come here. We have a really good pastry cuban style too. Come and check it out.

Extremely affordable, and personal pizzas are 9" and range from $4-7 depending on toppings. I went with the house special, which is a cuban sandwich on a pizza (ham, pernil, mustard, pickles, cheese). 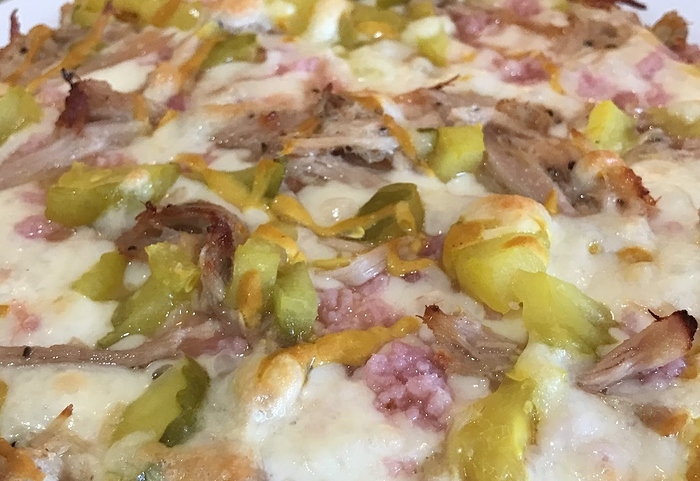 Discovered a new Uruguayan restaurant in the Elmora neighborhood area of Elizabeth.

Named, La Nonna, it’s a small deli-sized restaurant specializing in Italian-inspired dishes and traditional favorites such as the Chivito. I opted for the Chivito al Plato, served with potato salad. 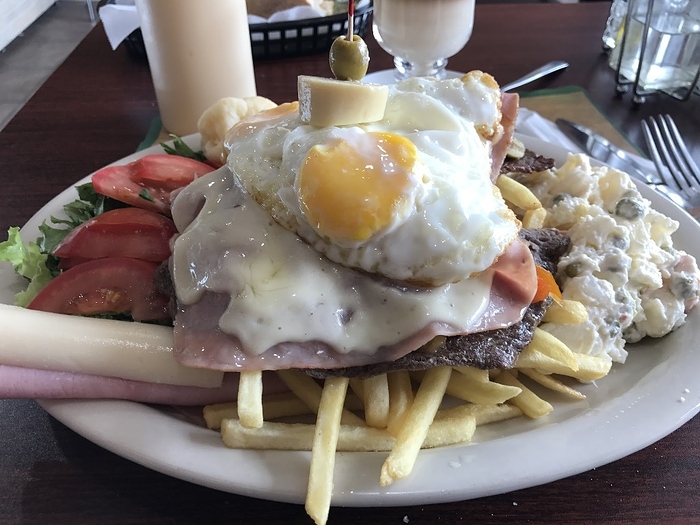 For dessert, I saw they had “chaja,” named after the chaja bird. Its is an insanely delicious Uruguayan specialty made of dulce de leche, peach meringue, vanilla sponge cake, and whipped cream. 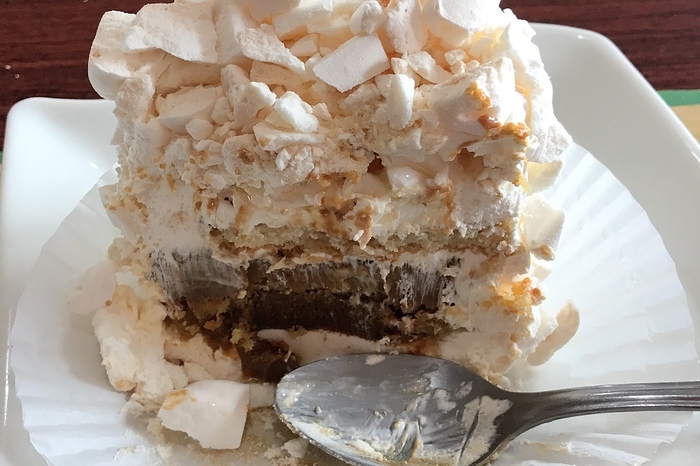