Cuchara is a Mexican bistro in Houston. It’s never achieved as much fame in the city or abroad as Chef Hugo Ortega’s nearby Hugo’s or his more recent Caracol but it’s stilll one of the best places in town to get upscale Mexican food from the interior. Unlike Hugo’s, which presents specialties drawn from many regions of Mexico, Cuchara focuses on the cuisine of Mexico City. It is particularly famous for its Comida Corrida, a prix fixe quick lunch, served in three courses. One of the featured dishes of the day is announced on Facebook at 11 am but there are choices for each course and the regular menu is also available. 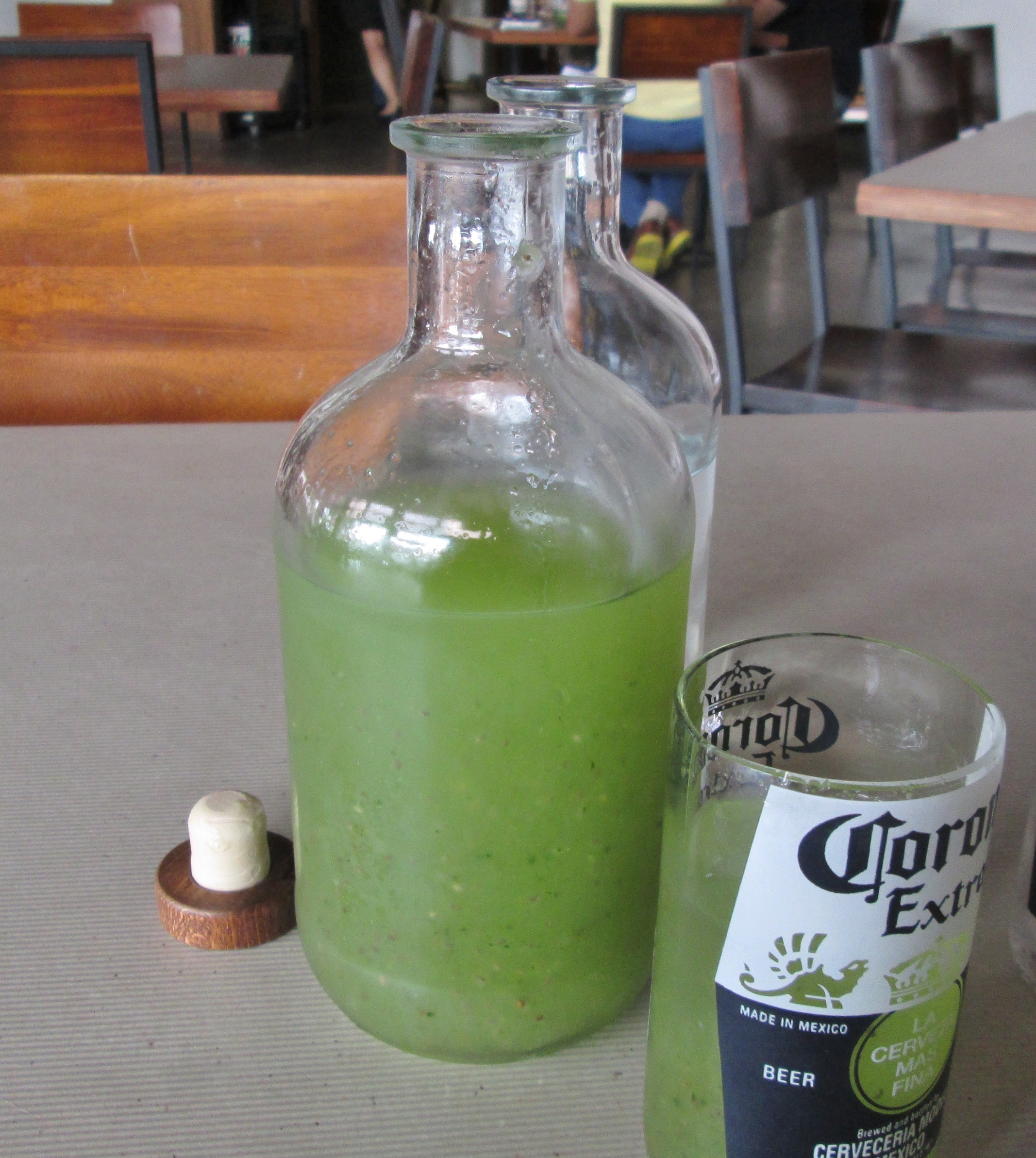 Each diner gets a one liter jug of the agua fresca of the day and the jug remains on the table, pretty much ensuring you’re going to leave with a very full tummy. Today’s was cucumber and lime and I couldn’t finish mine. 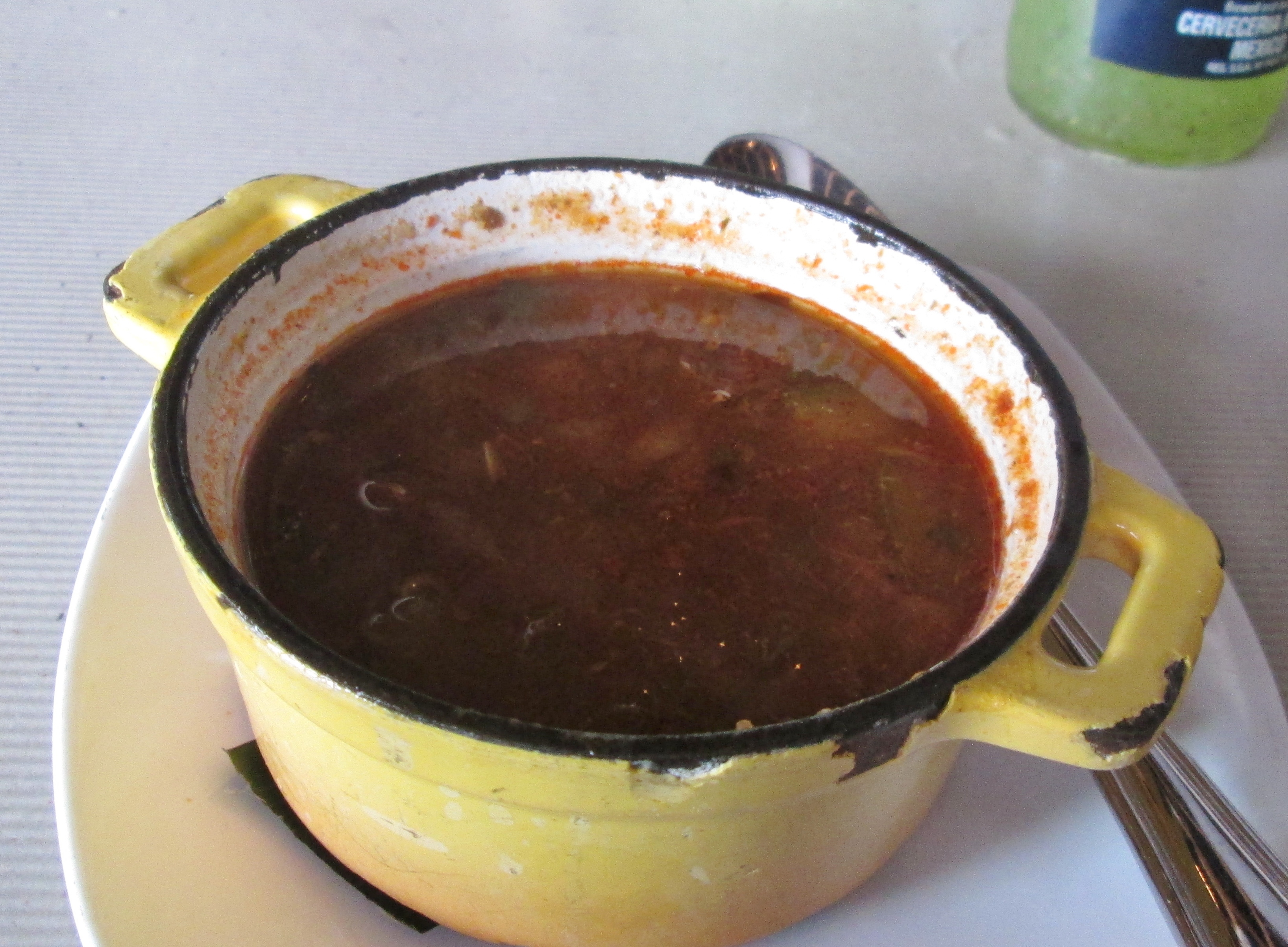 For my first course I went with the Consomme de Borrego, with lamb, chickpeas, potatoes, tomatoes and ancho chile. I think one of the other choices was chicken taquitos as I remember. 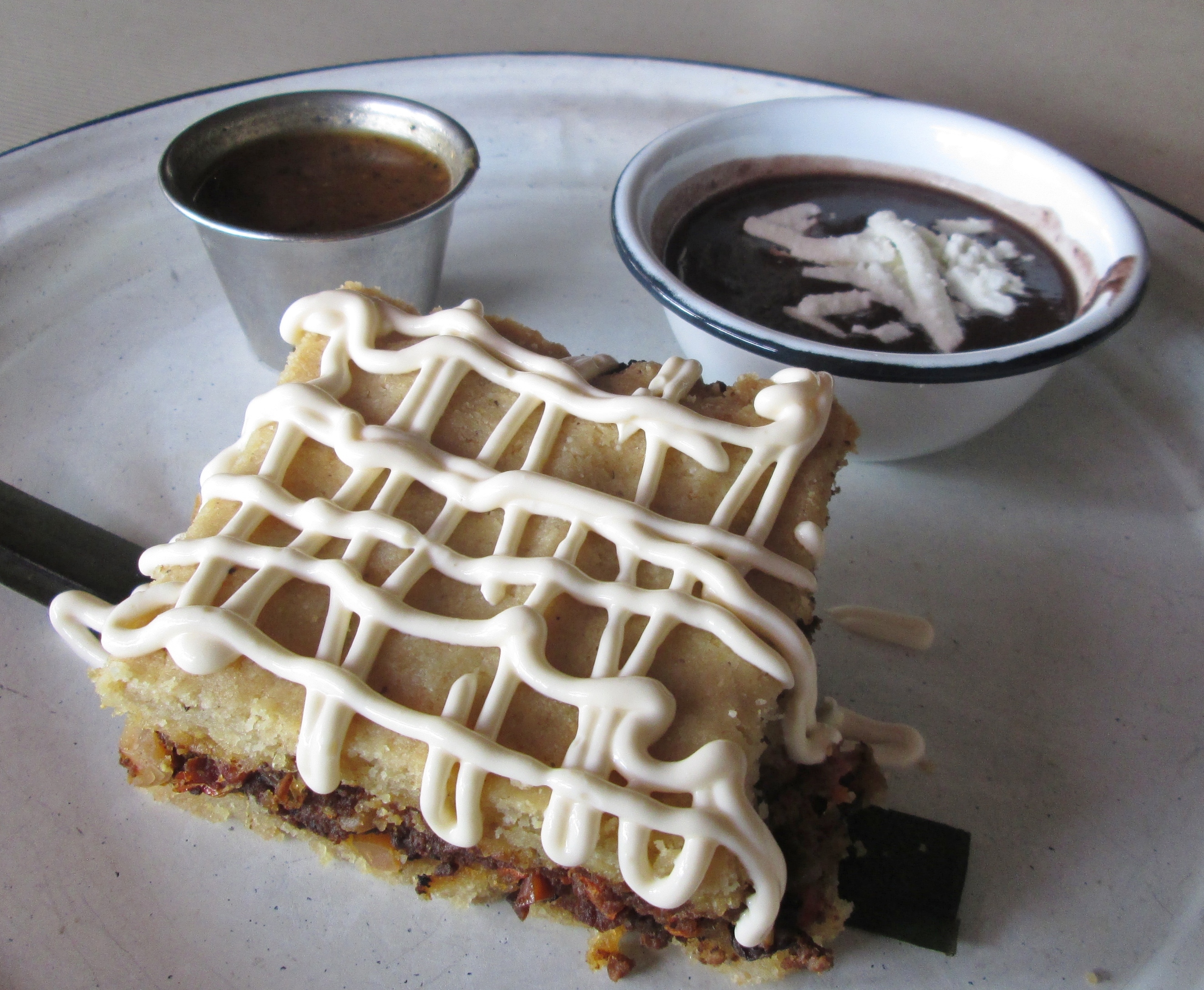 My main was the dish highlighted on Facebook today which drew me in, Tamal de Cazuela, a baked tamal with a filling of ground beef, slivered almonds, olives and raisins, dressed with crema. I got in very late for the Comida Corrida today and this had been pretty well dried out after being held so long. It should have been more moist and I’m sure earlier in the service it was but the smoky salsa helped. There was also a small cup of frijoles negroes refritos and queso fresco. One of the other choices today was Enchiladas Divorciamente.

There was also a desert course which I not only forgot to take a picture of, I can’t remember the name except it ended in de elote - yes, it was another corn cake, a sweet one this time. Fortunately it was much more moist than the tamal, with hints of dulce de leche and coconut.

The highlight of the meal was the consomme, not the best borrego in town perhaps but there’s never been one yet I’ve turned my nose up at. There is another tamal de cazuela on the regular menu but I don’t think I’ll ever order it.

Thanks for the heads-up. I’ll get by there. 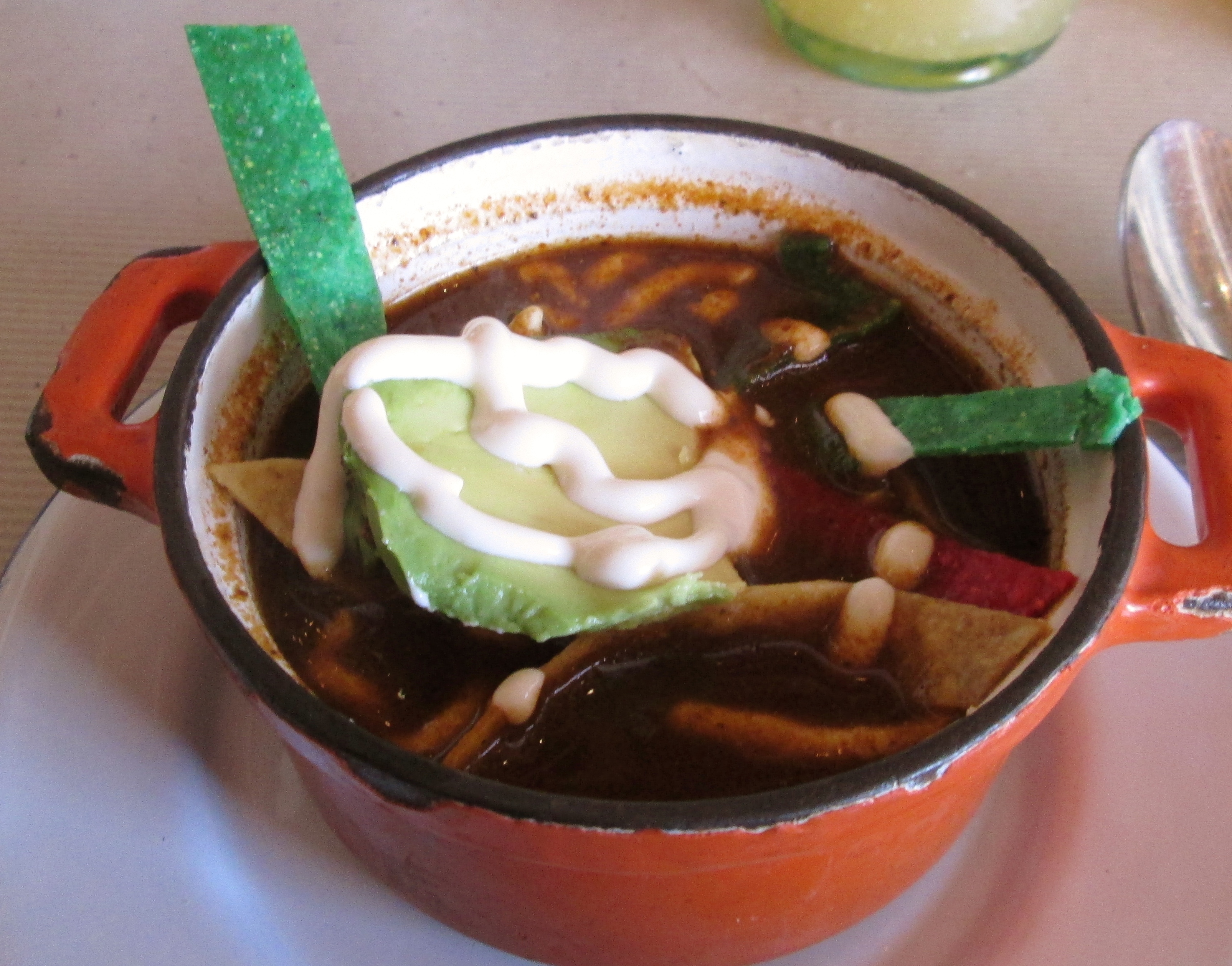 Another visit this week. I started with the Tortilla Soup - Sopita de Tortilla, with colorful, crisp tortilla strips, avocado and crema. I don’t often order tortilla soup but this was excellent, with ancho and probably one other chile. 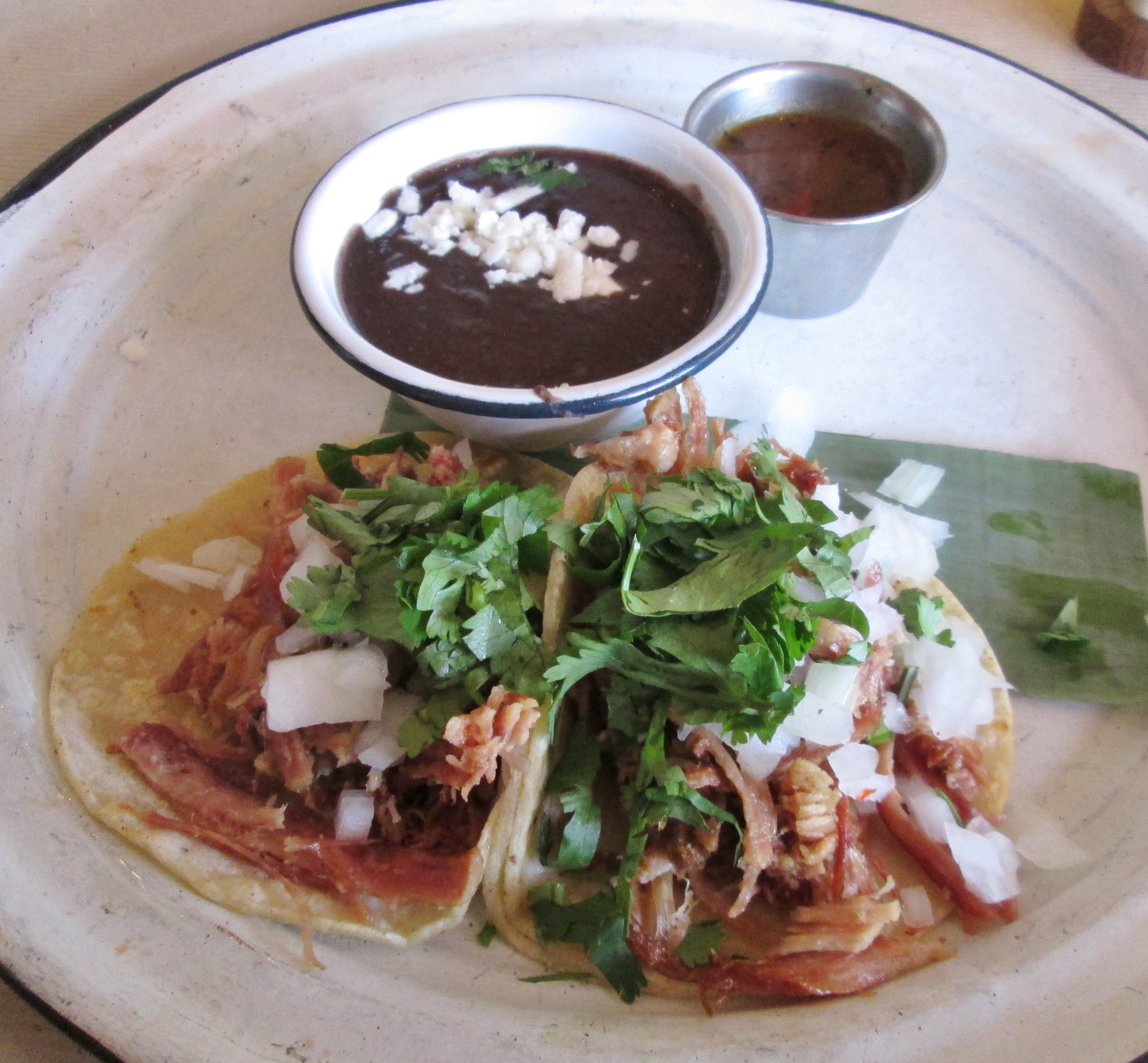 My main was the carnitas tacos - excellent, with lots of raw onions and cilantro. The meat was a little on the dry side but the very smoky salsa added the right amount of moisture.

The dessert was called a corn mousse but was bisque-like in texture, with dulce de leche more prominent than corn flavor. I was disappointed in the texture but it was good. 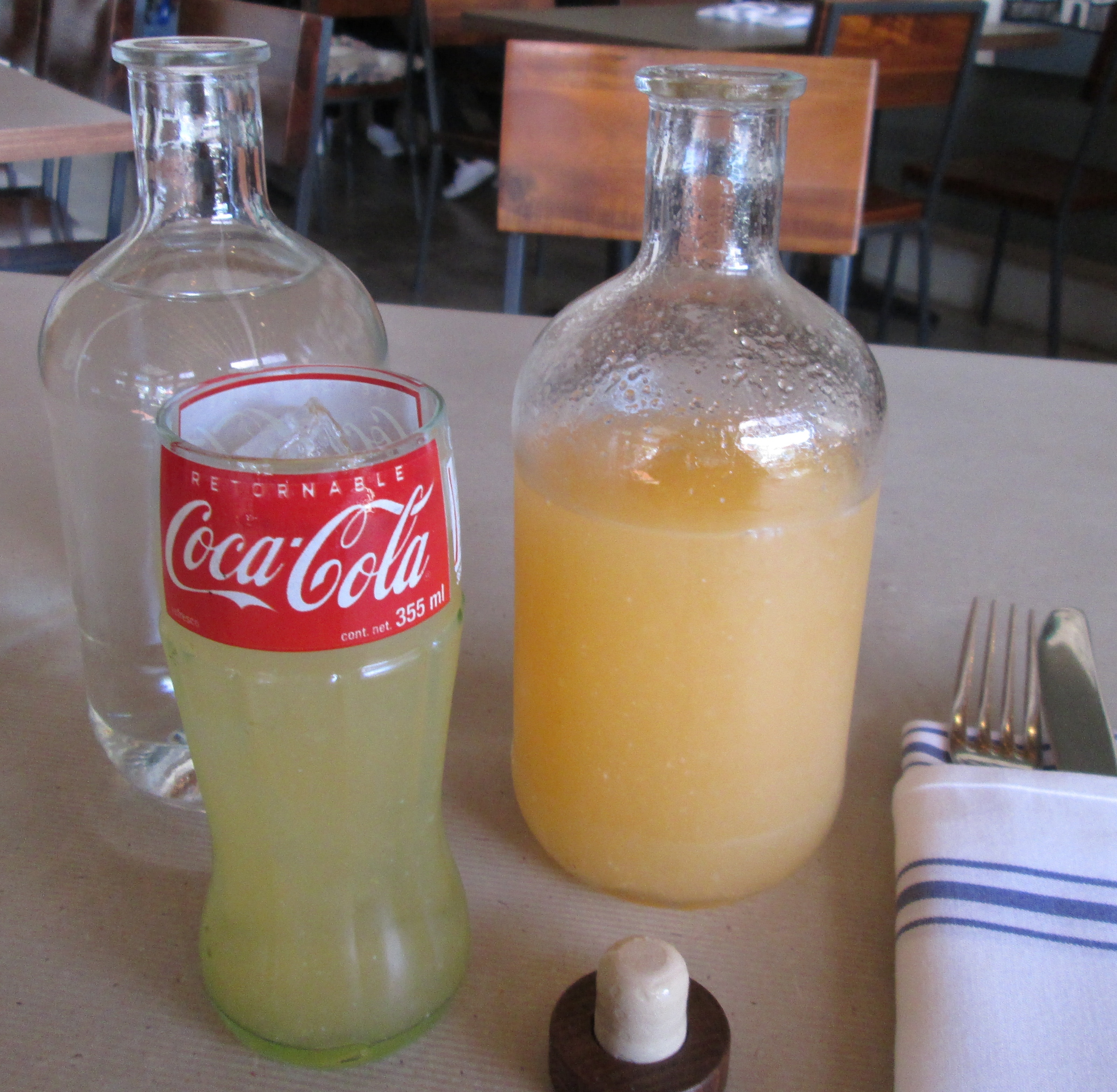 The agua fresca this time was Melon and again I couldn’t finish it. I realized the drinking glasses are made from old bottles. Cute.

A little pricey, especially compared to my more usual lunch fare,and the portions are smallish,but there’s lots of flavor and you don’t leave hungry. I wish this place was closer to me. I’ll try some of the regular menu one of these times when I’m really hungry.

A weekly menu of the Comida Corrida is posted on Facebook on Tuesdays (they’re closed Monday) so you don’t have to check in every day to see what’s offered.

That place looks wonderful, Bruce. I try to carry in my wallet a list of restaurants to try when I’m in Houston and hungry and trying to remember where it was that I wanted to go.

The “tortilla soup” looks a lot like Sopa Tarasca. By any chance was there mention of that? Or did they just call it tortilla soup?

No just Sopita de Tortilla aka Tortilla Soup. It was better than any tortilla soup I’ve ever had with a deeper, richer broth. I see from articles on Serious Eats and MexConnect that tarasca is a Michoacan style tortilla soup. FWIW, Cuchara is supposed to be Mexico City dishes so maybe a Mexico City variation on Tortila Soup that’s similar to the Michoacan one?

I see on the main menu BTW that they offer a fuller description of the soup and say it’s pasilla pepper - I thought it was ancho.

That tortilla soup looks wonderful. I had brunch here once and recall being disappointed in the surprise pricing of an off menu suggested dish especially when compared with portion size, but looks like I need to try again. They certainly didn’t have those agua frescas, are those gratis? I like how you tagged their website and FB page, I’ll figure it out too!

The owners were recently in the news for fighting back against parents of unruly children that were destroying the artwork on the walls, in once case, actually climbing a wall.

I think it’s fair to say it’s a bit pricey for what you get; the agua fresca ensures you will leave with a full tummy and there’s the quality of the food factor, so I don’t feel ripped off, though I wouldn’t want to spend that much for lunch every day. The AF is included in the $15 prixe fixe (you can keep the jug for an extra $5 bucks).

The orders I’ve seen coming out of the kitchen that were not the special, the plates looked fuller.

I saw that about the children. I have the luxury of eating at off hours since I’m retired and I have seldom seen any thing like that, although I have seen ‘Curb Your Children’ signs at taquerias before (in Spanish). Remember last year when Aquiles Chavez created quite a stir when he banned children after 7 pm at La Fisheria?