No toilet tissue shortages anymore (knocks wood), but most weekends still get crowded. Today was virtually no wait. Costco has not been immune to the good price increases, and it makes some of the bulk buys a bit more attractive, if you have the storage and fridge space.

For those interested in sous vide cooking, Costco has a good deal on the Anova sous vide immersion cooker kit. Comes with a plastic cooking bin, lid for the bin, and even a rack to hang multiple bags of food. $50 off at $149, but it’s in warehouse only deal.

Thumbs up on the white flesh peaches! White flesh nectarines and peaches are a favorite, and today’s peaches are delicious! Crisp as i like them, and very sweet. I much prefer the box of 9 vs the box of 15 or so they used to have.

We supplement dinners with the packaged sous vide entrees which are not frozen, except for the block of frozen white shrimp which are very good and a great buy., our favorites are lamb shanks, stuffed chicken breasts, lemon grass chicken, chicken tikka masala, spinach lasagna and a couple of others. It’s frustrating, though, that the 3 Costco’s near us all seem to carry the same ones and I’ve read online posts that there are lots more at other locations. Our dinners are mostly homemade from scratch but these, plus a few of Trader Joe’s frozen entrees, are great fill-ins when time is tight.

I was pleased to see that samples are back at my local, Richmond CA.

The chicken tiki masala was $4 off yesterday (and I assume might still be on sale). I agree - they’re a nice option if you didn’t have time to cook a whole meal from scratch.

@Midlife - yes, samples are back in the Boston suburbs too. Actually tried a pretty delicious coconut lentil dish, that i would have bought if I weren’t already quite full on the cart.

I don’t know if it’s interesting but I am a fan of the individually frozen peeled but tail on large shrimp ( forget the number per pound but it’s in the blue bag), the telicherry (sp?)peppercorns, pecan halves (might be sort of seasonal), unsalted butter ( which I keep in the freezer), and some of their EVOO

Don’t know if Costco still carries this, but the 4-pack of tiramisu from Italy we got last year was a find (look for it in the refrigerated case). Plus, the desserts come in real glasses, which we now use for short cocktails.

I saw that this weekend, next to the dark chocolate mousse! I’m not a huge tiramisu fan (simmer down, dessert fans), but they are still pretty good.

I also bought a jar of Girl Scout Thin Mints (r) Almonds. They are essentially minty dark chocolate coated almonds. These things are addicting, and yes, they do taste like actual thin mints.

I prefer Costco by far over Sam’s for product but for ease in checking out it’s Sam’s by a long long margin. I haven’t the need to buy in bulk so don’t use either any more.

I don’t remember how much this was but it was a good deal I recall, nice fresh mozzarella. Nice to have around for homemade pizza, salads and sandwiches. 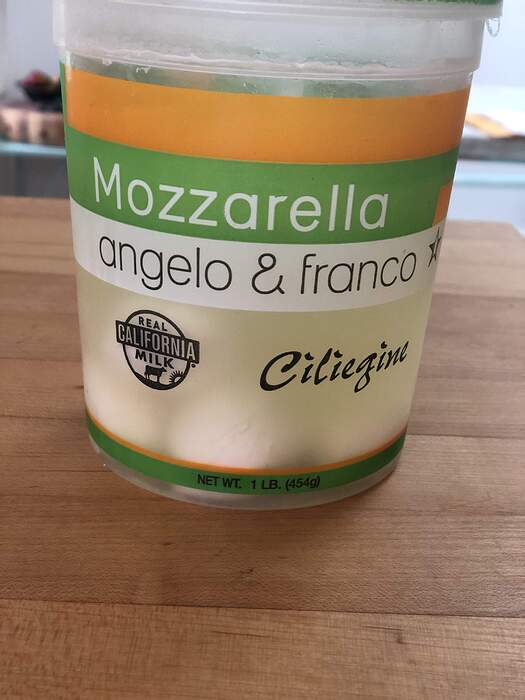 And in the everyone but me probably already noticed this department - Kirkland brand albacore tuna is 7 oz/5.4 oz. drained versus Starkist 5 oz/4 oz drained.
I’ve always liked Kirkland canned solid white albacore, but this makes the deal even better.

The Kirkland almond butter is the same price as most other almond butters, but the jar is double the size. That makes it a really good deal in my book. And it just includes almonds and salt–no sugar or palm oil.