Thanks for the heads-up.

And speaking of charges, the next time you use my credit card to fund your party - and don’t invite ME - I’ll be pressing them!

Yeah but we still have the ritas, or what’s left of them.

The Laurenzos are going to come down hard on you.

El Tiempo with a sign rita’s and fajitas to go. Please, we’re not gonna stop?

Our twenty bucks for fajitas for one got us four good servings done deliciously El Tiempo style with all the sides.

The ritas are pricey and strong como siempre. Hey, any port in a storm.

I think I’ll drive through Lopez and get their family pack (only item for sale now) and some of their margs by the quart/gallon. They are calling today Margarita Monday! 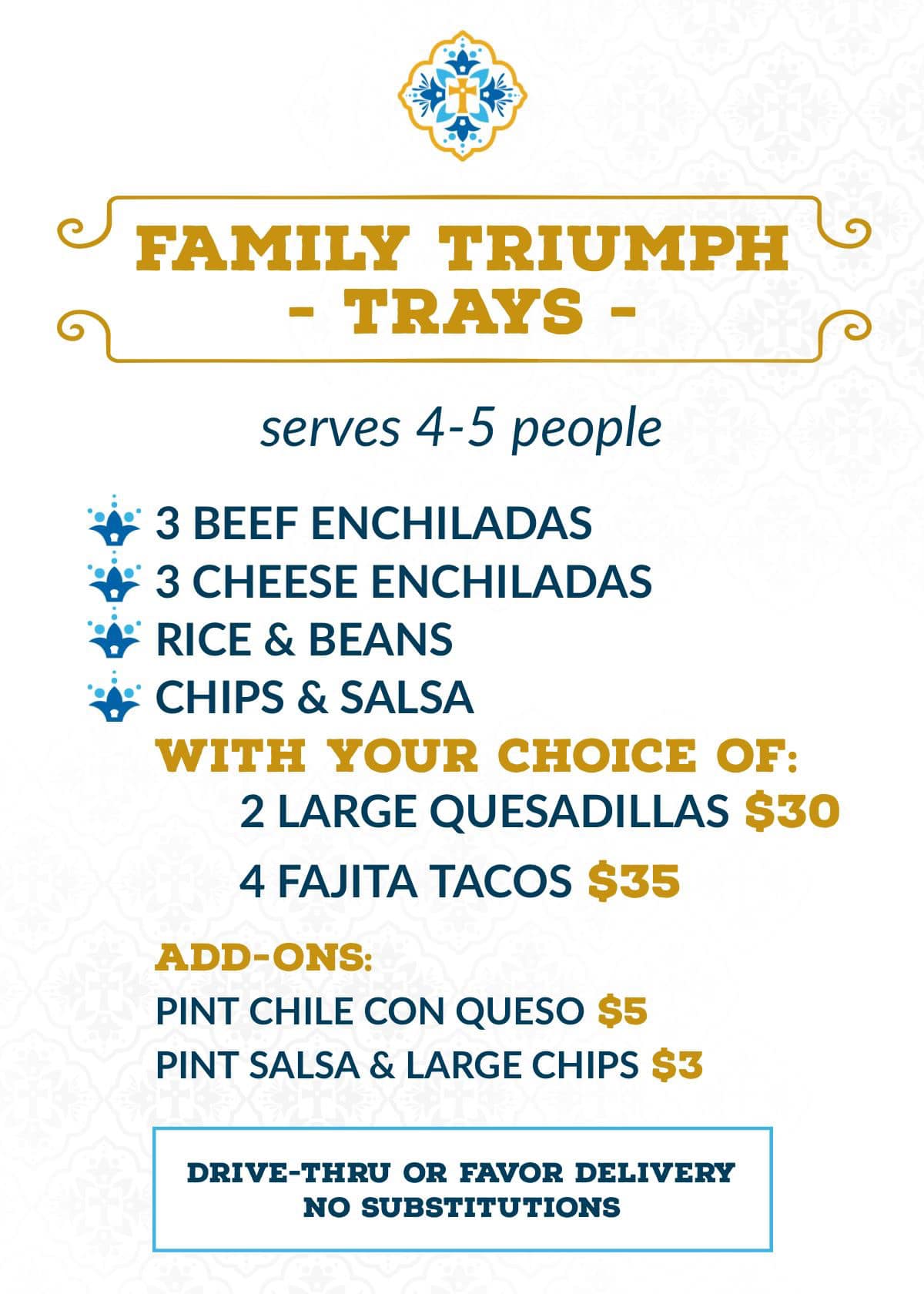 I decided to stay closer to home. 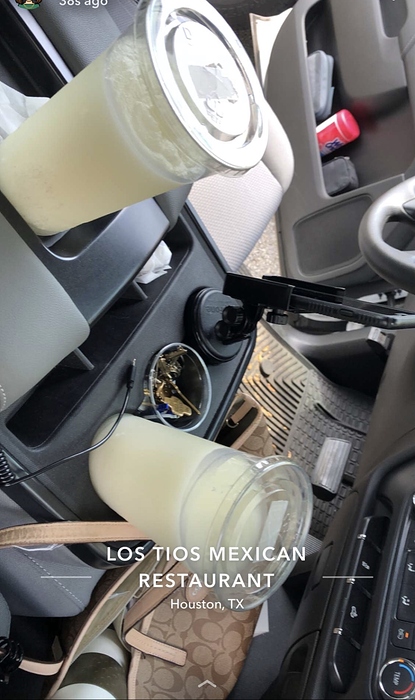 Second take-out of the quarantine today was Himalaya.

Lamb Vindaloo
Chicken Hara Masala
Saag Paneer
Rocket Naan
Some freebies from Kaiser: Samosas and his wonderful Magic Mustard Sauce that he serves with his Hunter’s Beef, which is actually Indian spiced corned beef, shredded and griddled on the flat top until crispy. As I recall, Bourdain loved that dish. 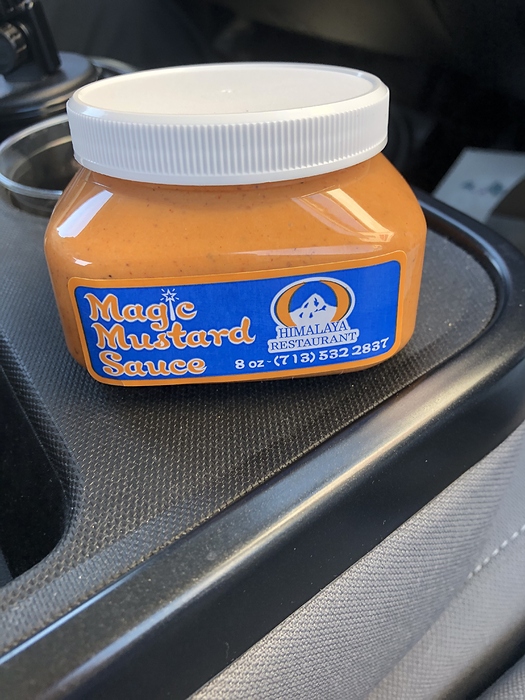 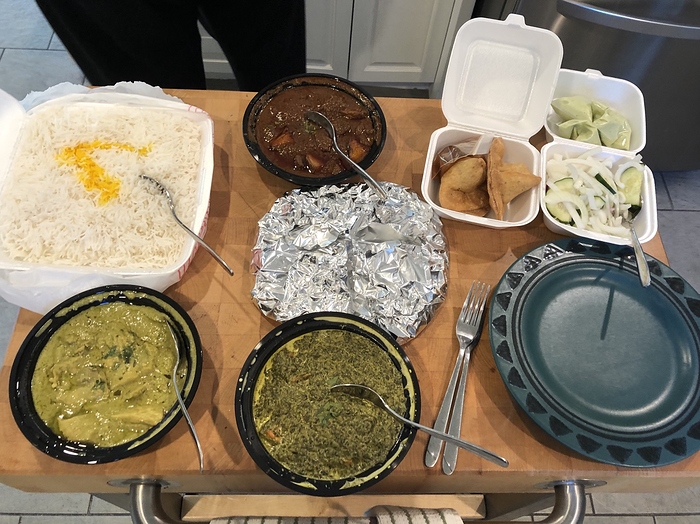 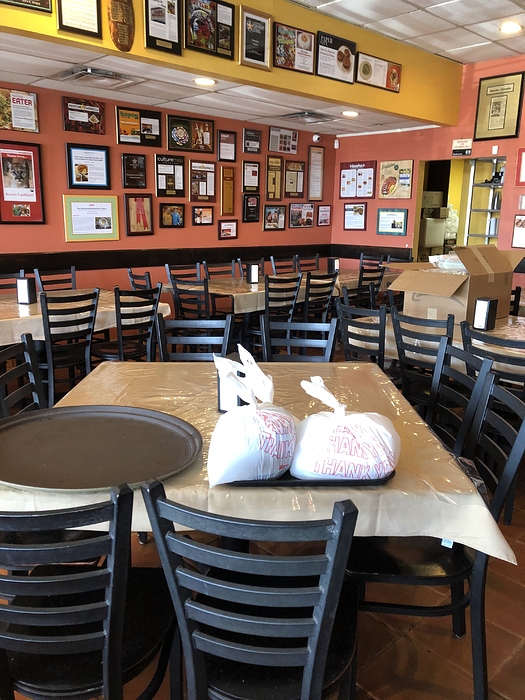 Do you want the truth?

The Wifeacita after several phone conversations with our doctor is assuming she has the corona.

She works for the health department and in their infinite wisdom she was sent to a city center where a thousand second graders were having their teeth looked at in mid March second week. She was crowd control and started seeing symptons a week later.

This was the week the rodeo was canceled on a Wednesday but they were sent back out on Thursday to soldier on. Friday HISD canceled classes and she was sent back to work.

I told her the stupid ass city was trying to kill both of us.

Today she calls in at work and was promptly bitched at by her beeatch supervisor because she had type a flu, we both had flu shots last year, in in January with a note from a positive test despite stern orders from our great doctor not to go to work.

I/we are so pissed. She had some choice words for the city but I came on one from the film Office Space, cock gobblers, she even used it with our doctor. The doctor says he will take care of the city.

She seems a little better but the evening fever hasn’t ramped up yet.

DO NOT go to the ER unless you have severe breathing problems because of all the sickness and you may get worse. They will cut you loose unless you need a ventilator

No Advil only Tylenol for fever

Any other questions please ask as I have some extra insight.

Oh my gosh I’m so sorry to hear this! I hope she feels better soon and it seems like she is pushing through at this point. I feel so bad for her. I was just talking yesterday with Mr. Lamb about how much business the lawyers are going to get out of this virus. Y’all take care and keep us updated, let us know when she fully recovers.

Oh my gosh I’m so sorry to hear this! I hope she feels better soon

Sorry about the b words that I haven’t used in 45 years with disastrous results, but we’re pissed at the city.

On my gosh, all of what Lambsy said. Please keep us informed and we’ll be sending good thoughts your way.

Count me in with the well-wishers. We’ll all be waiting to hear & hoping for the best possible news!

Somewhat optimistic. Fever 101.8 last night 100.4 tonight for what the CDC says is the minimum threshold for fever, if they say so.

She had the type a flu in January with consecutive 103.5 nights but this seriously shoved a boot up her butt, severe lethargy.

Oh, me being around her constantly, I’ve got the sniffles.

How about a meet up?

I was just talking yesterday with Mr. Lamb about how much business the lawyers are going to get out of this virus.

Not being litigious by nature but the mayor and the deer in the headlights county judge announce the closure of the rodeo yet the next day the city sends health care workers out to see hundreds of kids for tooth care in what is literally a life threatening situation.

I’m getting more upset by the second.

5 pm Thursday and so far no fever, knock on wooden head. This morning the doctor called and said she’s on the road to recovery.

He’s called every day since Tuesday and will call back tomorrow.

Great news! Continued prayers for you and the Mrs.

Thanks Bob. I love the New Jersey board and wish we had the activity down here. We have a few loyal posters and I’ve met them all and they are truly wonderful people.

The doctors at Village Family Practice are terrific, been going there for 15 years. Air hugs to you both.

Let me say this about that.

If you have severe symptons I suggest calling 911 and having the pros at HFD take care of you.

While the Wifeacita is having a bad health year I had one last year and trust me:

I suggest calling 911 and having the pros at HFD take care of you.

We live across the street from an HFD station and it’s eerily quiet, very little activity and all the trucks are there.