[Copley Square, Boston, MA]
Recently moved offices from South Station area to Boylston & Berkley area. There are an overwhelming number of lunch choices, so would appreciate any recommendations of good takeout within a 15-minute walking radius or so. Points for healthy and/or unusual, and non well-known chains.

After about 25 years in Cambridge I realized a few weeks ago that the Back Bay Amtrak Station – is $7.50 closer to my abode in Cambridge than South Station. So far I’ve used this new information only on the return – nights when I’m too tired to eat. On the way out, typically a Monday, I still go to SS because of the better food options in the vicinity – Gene’s, chopped pork-on-rice in Chinatown, oxtail/goat at a food truck. But if there’s better food near Copley, I’m there, bib tucked in, fork and knife in hand.

Welcome to the neighborhood! Ive been here for 35 years :-o

Blue Glass Café in the Hancock Tower
The Greek Grilled chicken cart on the Boylston St side of Copley Sq
The food trucks
Moodys
Mooncusser
Back Bay Sandwich in the Park Sq Bldg
Billy’s right over the bridge into the south end
Ill think of more ….

Cava is a decent chain that seems reasonably healthy. Jugos has really healthy offerings but more appropriate for snacking.

Stoked and Tenoch both have food trucks near Copley that match the quality of their brick and mortar locations.

Mooncussers’ website leads me to believe they don’t open until 5? Seems a bit late for lunch. Went to Blue Glass Cafe today, they have a decent if unremarkable salad bar.

I may be imagining this, but it seems like the prices are slightly lower here then downtown.

Haha, Mooncusser is the fine dining restaurant on the second floor, which doesn’t open until dinner, but they also serve casual lunch at Moon Bar on the first floor and via their takeout window, Cusser’s.

I quite liked Greco for a casual meal the one time I ate there.

Great to hear! And very timely - a coworker and I were actually planning to try it this week.

Davio’s takeaway in the lobby of the office building is usually really good.

New York Pizza and Maria’s Taqueria on Tremont are good

Dumpling Café is one of the first restaurants in Chinatown that you’ll hit on foot and its usually very good.

WGBH or BUR, i forget which, broadcasts live from a corner of the BPL on Boylston St. Bring your lunch or buy it from the café inside and watch and listen to their broadcast.

Went to Blue Glass Cafe today, they have a decent if unremarkable salad bar.

Sadly, it is one of the best around…

WGBH, Boston Public Radio. I always thought that would be a fun lunch break to listen to them broadcast from the Library. Too bad I work in the 'burbs!

I still like Cafe Jaffa after all these years.

Jugos juice bar in Back Bay station is a good grab and go spot in a pinch.

Luke’s lobster has a decent roll.

Dumpling Cafe was my last visit in Chinatown before leaving South Station! It seems farther from here, but really is only about 5 minutes more.

Hit Greco today, tasty pork gyro pita there. And Cafe Jaffa the other day as well, for a shawarma salad. I’d say Greco has the upper hand, but it wasn’t really a fair fight since the pita was stuffed with fried potatoes and tzatziki, which I think firmly changed its category to a (calorie) splurge. 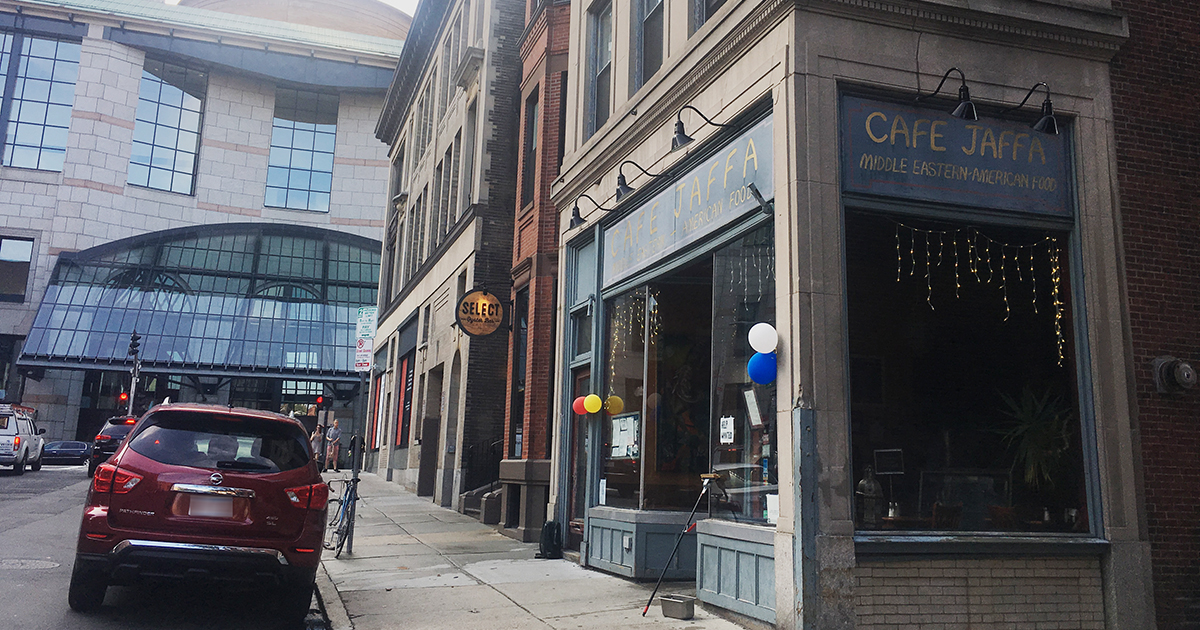 The owner of Cafe Jaffa is retiring and selling the long-running restaurant.

Still open, as of Tuesday.

Num Pang Kitchen (in Prudential Center) looks kind of interesting as well, may give that a shot soon.

ETA: Santouka only if you’re not doing takeout. Ramen does not travel well.

Sad! I’ve always loved Cafe Jaffa, and it was one of my go-to places when I worked in the Back Bay.

I used to make regular hikes to Chinatown from the Back Bay, and I was right off Boylston and Berkeley too so very walkable, IMO. I would grab banh mi’s, rice/noodle plates, and even other bakery items for a quick lunch. It’s been many years, though so maybe some of this is outdated.

Chili Duck had the a really good Thai menu and is good for takeout and more. Douzo has good sushi and Japanese food, and this is where the original b.Good started it all, so that’s a nice spot for a healthier take on burgers and such. I know friends who love sweetgreens, but I’m kind of meh. I guess always good to know where you can get a decent salad.

Last week discovered 207 Berkeley St, which, behind a rather unassuming doorway, is a block-long hallway with several eating options including:

Pretty positive experience at Num Pang Kitchen last week. They have a variety of cambodian sandwiches and salad variants. I had a pretty tasty salad with spiced catfish on top last week. It is in the middle of the Pru mall, next to Anna’s Taqueria.