50 States, 50 Cuisines: The Food Worth Traveling for in Every State

Found this to be a fun read about what cuisine outside of the main local cuisine is worthy for food explorers like ourselves. Some may be well-known (e.g., Hmong food in Minnesota), but I found a few surprising recommendations, even for my own state.

MA has a reputation for having a sizable Vietnamese population, and also a Cape Verdean population. Even though I know there are a lot with Armenian heritage locally, I have never thought about Armenian cuisine and haven’t tried the places mentioned in the article. I’ve heard of Anoush’ella, but rarely venture to that area since it’s not the easiest for me to get to. I hope many of these places can weather through the pandemic so I can give these places a try.

Like to ask everyone, do you agree with the proposed cuisine in your state?

Yes to NY, NJ, and CA, though I wish the NY recs had focused away from New York City. I had the pleasure of eating at Asanka Cuisine in Somerset, NJ one New Year’s Eve. It’s tucked away in a little strip mall, and the owners were so happy that us 3 white ladies (a) knew about Ghanaian food; (b) had eaten it before and so ate with our hands; and © were not afraid of spice. It was a great meal.

I can only speak for my state, but I think it’s a good call out for cuisines we don’t always seek out. Coming to Boston, I think most people want seafood (clam chowder, lobster). Those in the know might seek out Vietnamese, since pho and banh mi have had their moments in the media too. I mentioned Cape Verdean in my post, and I think that would have been a food that’s good to highlight, but it’s got similarities to Portuguese food because of their historical relationship. With that being said, Boston has a few really interesting Portuguese and Brazilian places too that could use a shout out. To me, Armenian is just as good worthy of a nomination to showcase. We have a few lovely restaurants (and I mean a sit down, full service experience in a nice space) that focus on that cuisine that could impress someone trying the food out.

I appreciate calling out the non-traditional cuisines, or at least the recommendation that might not be top of mind for food travelers and locals. Korean isn’t that adventurous for me, but I like that if I go to Georgia in the future, I might find some good Korean while I’m there.

I’m with you - while I of course love discovering new foods in NYC, it’s become such a well-known corner of diverse ethnic foods that, it wouldn’t surprise anyone that there is more foods here. I like the off-the-beaten path suggestion of Guyanese, but I wish they would break any cuisine analysis into multi-parts – NYC and then upstate NY (and maybe even other sub-divisions). I’ve spent a few business trips up in Rochester and there has been some good discoveries there too (had a pretty good Vietnamese meal there!).

For a publication like Condé Nast, which usually focuses on the good life, a pretty detailed and interesting list.
Various ethnic groups settled in America all over based on employment and similar climates to their origin, but not always.
Cool

Yup. It’s definitely worth seeking a Basque restaurant in Boise and a Vietnamese kitchen in New Orleans.

And I would have never thought that Basque and Boise would belong in the same sentence, let alone in the same region as a dining option. I can’t say Boise is on my travel list, but I’ve had trips that take me to unexpected corners. I love, love Spanish food, so if the Basque food retains some of that influence, I’d be in heaven.

Sheepherders all over the Mountain West.
Winnemucca in Northern Nevada still has a Basque culture. The Martin Hotel, driving back to KC with my mother, was an all time experience.

And Persian cuisine for California needs to be mentioned, not only for the big community in LA but also for the community in the Bay Area, particularly the South Bay. One of the few cuisines I couldn’t get in NYC, other than one guy operating out of a pizzeria.

With that being said, Boston has a few really interesting Portuguese and Brazilian places too that could use a shout out.

And just to elaborate a bit more, much of the Portuguese food in MA is actually Azorean.

Re-Post 213 – Mennonite Ethnic Foods – Faspa: Faspa was a part of my life growing up on a wheat farm in Kansas. Faspa (a Low-German word) is a late afternoon (light) meal on Sunday or also during busy farming days. The tradition of Faspa continues on today with many Mennonite Farmers, in our family it was typical to have Faspa brought to the field by my mother for dad (and the whole family during harvest time). Mom would often bring a blanket that was spread out in the shade of the truck or the combine. Food (typically) consisted of Zwieback, bologna, ham or cold sausage, round Colby cheese weges, sweet iced-tea and a desert of “Schnetje/Schnetke,” or Platz”. Sometimes for a very light snack we might have just watermelon and “Crullers.” I will share about these foods in the upcoming posts. Source and Image 1: Glen Ediger. Image 2: Faspa in the field, date unknown, MLA collection.

This is from one of my FB pages, The Mennonite Farmer 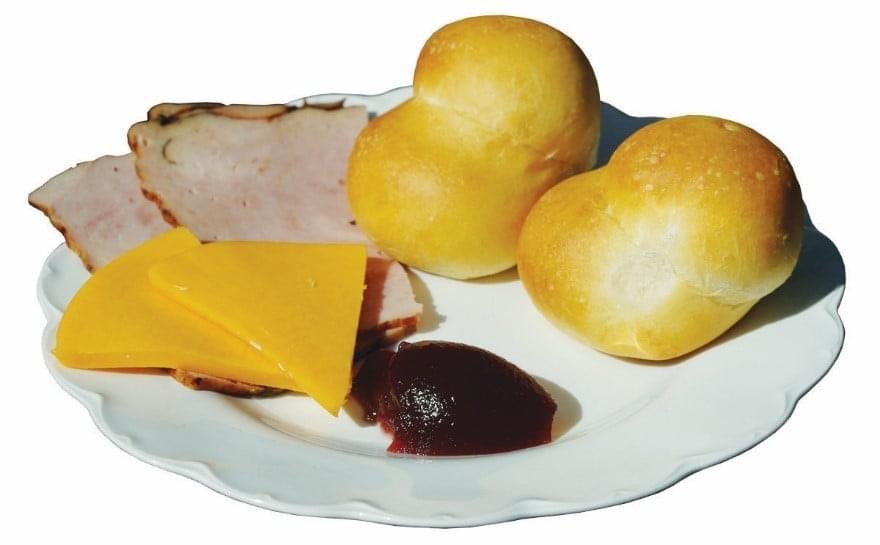 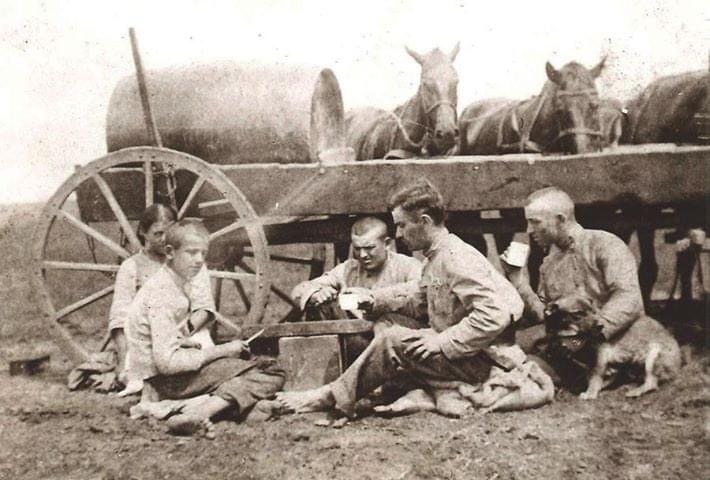 Re-Post 216b – Mennonite Ethnic Foods – Rollkuake (Crullers): The Crullers have been popular with Mennonites from the Vistula Delta to the Ukraine, to Canada, and Paraguay, and can be found most easily in the United States Midwest, where many German immigrants settled. The recipe and quote are from Mennonite Girls Can Cook: http://www.mennonitegirlscancook.ca/2009/06/rollkuchen.html online 1.9.17 “Every Mennonite recipe book needs at least a few different recipes for Rollkuchen. . .and that way when you are out of ingredients for one of the recipes maybe you’ll have the ingredients for another. . . This recipe is my mother-in-law’s…and I’ve been making it this way. . .for 31 years. . .with no complaints.
Rollkuchen:
• 1 cup whipping cream
• 3 farm fresh eggs
• 1 tsp. salt
• 3/4 tsp. baking powder
• 3 cups of flour 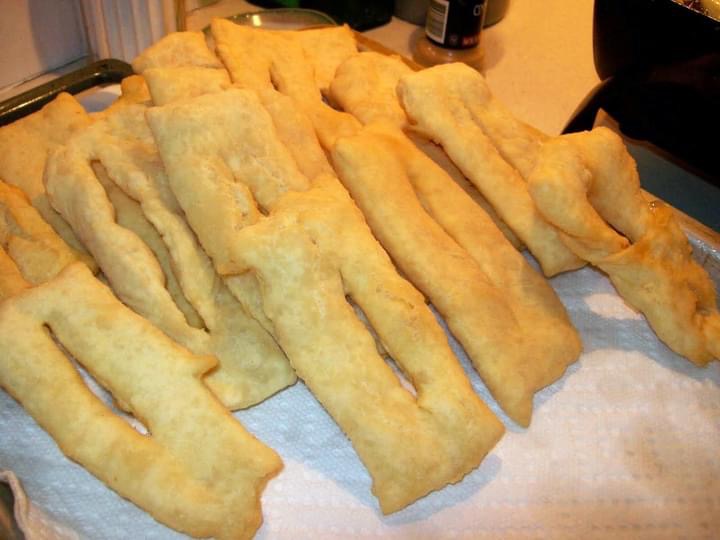 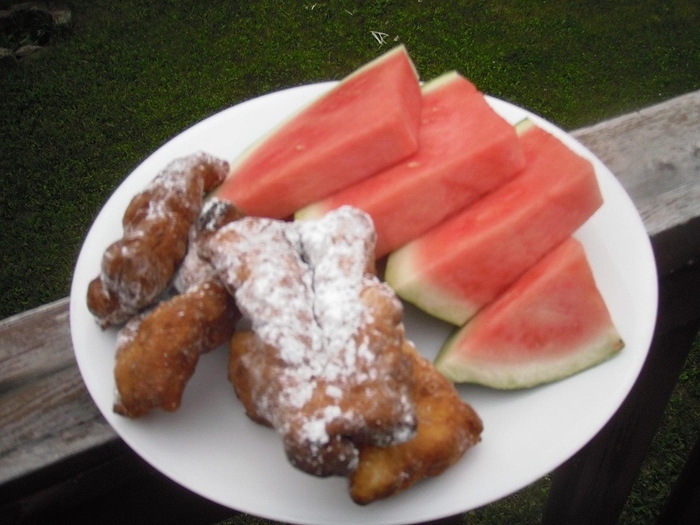 The Basque talk on this thread intrigued me; I spent most of my young life in Idaho, and was first exposed to the food and culture there. Mainly in seeing the sheepherders temporary homes. They’re all over in Wyoming, as well as Nevada. Having lived in Reno for 9 years, we always stopped for Basque food while driving across the state or little junkets here and there.
Our very favorite place is the Star in Elko.

H confirmed that we did indeed eat at the Martin Hotel as well. Great food and ambience, seating a little atypical for Basque restaurants. Many places have benches, and it’s more like family eating, rather than a restaurant. As I recall from 1990, the tables were round, and it had more of a restaurant aspect than most. But the food was awesome.

Oh, if anyone does make it to Boise, Idaho has a thing about fried “finger steaks” - the good ones are well and truly delicious. Seasoned, lightly dusted with flour and spices, then deep fried. What could be wrong with that? Answer - not very healthy but great for an occasional indulgence. I’ve tried to hack them, with mixed results. The only other state I’ve visited that had great ones was Pa, Pittsburgh area. Don’t know where else they might pop up. 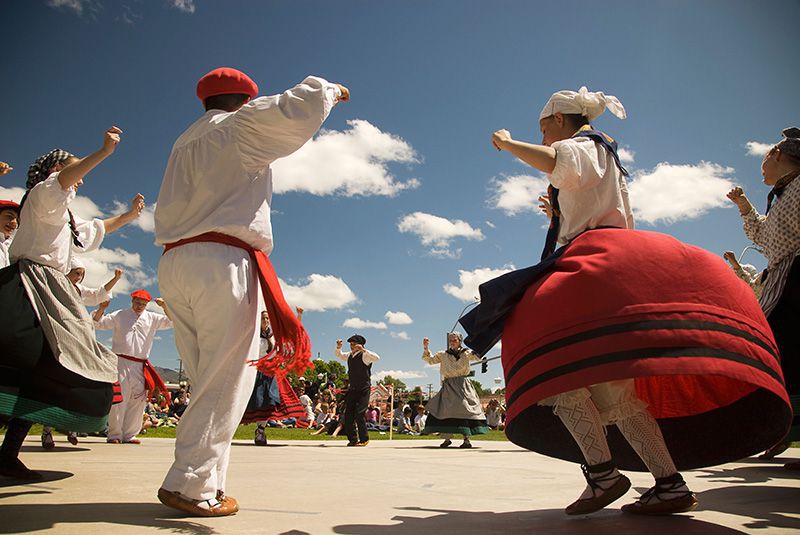 How a Remote Nevada Town Became a Bastion of Basque Culture

Tiny Winnemucca, with its high concentration of Basque restaurants, is doing its part to preserve Basque traditions

Very interesting - thanks @bbqboy. Think I’ll make a post about the Star in Elko.
The interior of the Martin, I do recognize, but I misremembered the tables. They did have the same colored cloths on the table though. The Basques really know how to cook their lambs, and that is a fact! They do a great job on steaks too.

I have sought out some of the cuisines they mention for their respective States. I am a regional food and ethnic food geek, so I usually seek out whatever is regional, as well as ethnic stuff that’s hard to find in Canada.

I enjoyed the Hawaiian foods in Hawaii. I had a few lists of foods to try and I used a search of the key word with GoogleMaps to help find specific dishes like chicken long rice, saimin or ensaimadas.

I didn’t know Colorado had Slovenian food. I visit fairly often, and usually seek out chile verde- Colorado Springs is largely a city of chain restaurants.

My last few visits to NYC, I was focusing on seeking out Russian, Georgian, bourekas and Bolivian food.

I really enjoyed the Cuban foods I tried in Miami, especially some pastries and the coffee. Miami also seems to have better Peruvian restaurants than Toronto.

I will keep the article bookmarked for when the border opens up and I can visit the States again.

I have enjoyed Pennsylvania Dutch food north of Pittsburgh. I visit PA and OH fairly often- hope to explore some other ethnic stuff on my next road trip.

There are similar places in the California Central Valley. There was a thread with several posts about it. In fact I wondered if that was the thread you were thinking of in your recent query.

From the article - The area’s oldest Basque restaurant — and, so it is said, the world’s last surviving establishment of its kind — was founded in 1893 by Faustino Noriega, a Basque immigrant who beat the railroad here by six years. The hotel, which Noriega ran with partner Fernando Etcheverry, catered to young Basque men engaged in what was then a common vocation for imported workers from the Pyrenees mountain range of northern Spain and southwestern France: sheepherding.

I thought of Bakersfield as soon as I saw Basque. I meant to stop there to try out a Basque restaurant on a few trips, but we are always in a rush to or from the Bay Area and always end up having a quick stop for a burger near the freeway instead.

I also remember reading about a Basque bakery somewhere near Mammoth Lakes back in 2008 before I visited. I didn’t end up venturing beyond the town, and didn’t get a chance to try it.