Commuting breakfast from Mission to Peninsula

There are a couple places for jook on San Bruno Ave. Hoy Sun has mediocre take out dim sum and pretty good jook. I like the chicken and mushroom, but they have a bunch of other kinds. Further down, Red House Bakery has really good BBQ pork buns and pretty good jook. They have a breakfast special that is chicken jook, soy sauce chow mien and milk tea for somewhere around $5.50. My two young daughters and I shared it for breakfast on Saturday morning with an add on bun for the older of the two. It’s one of our post-farmer’s market breakfasts on Saturdays when my husband isn’t around. Jook is not breakfast to him.

Thanks for the tip! That neighborhood is very accessible and there are ton of places open. 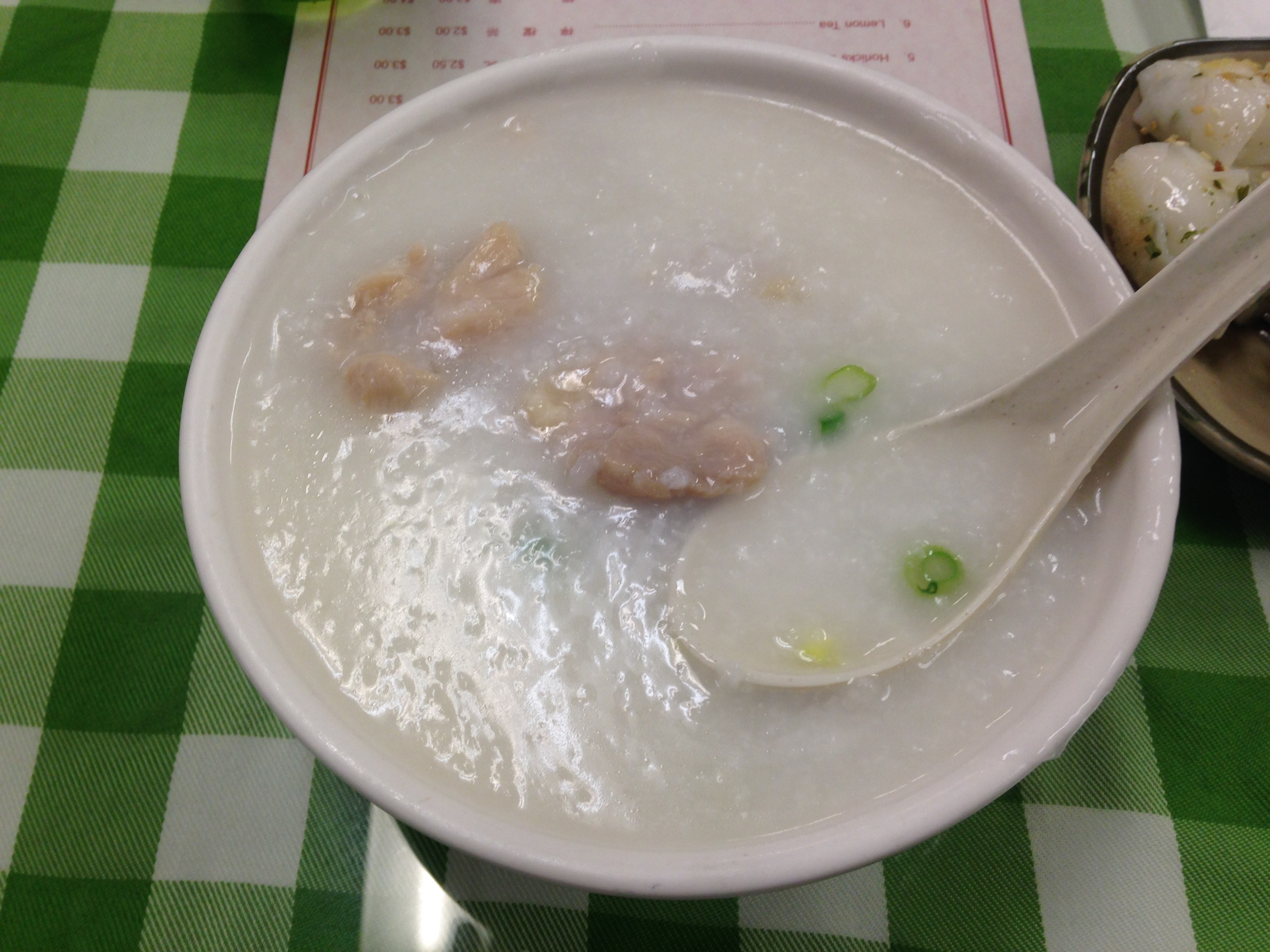 A bowl of chicken Jook at red house bakery warmed me up. I liked the consistency, lack of noticeable MSG, and distribution of sliced green onions. The chicken tasted a bit off, so I will get a different variety next time. 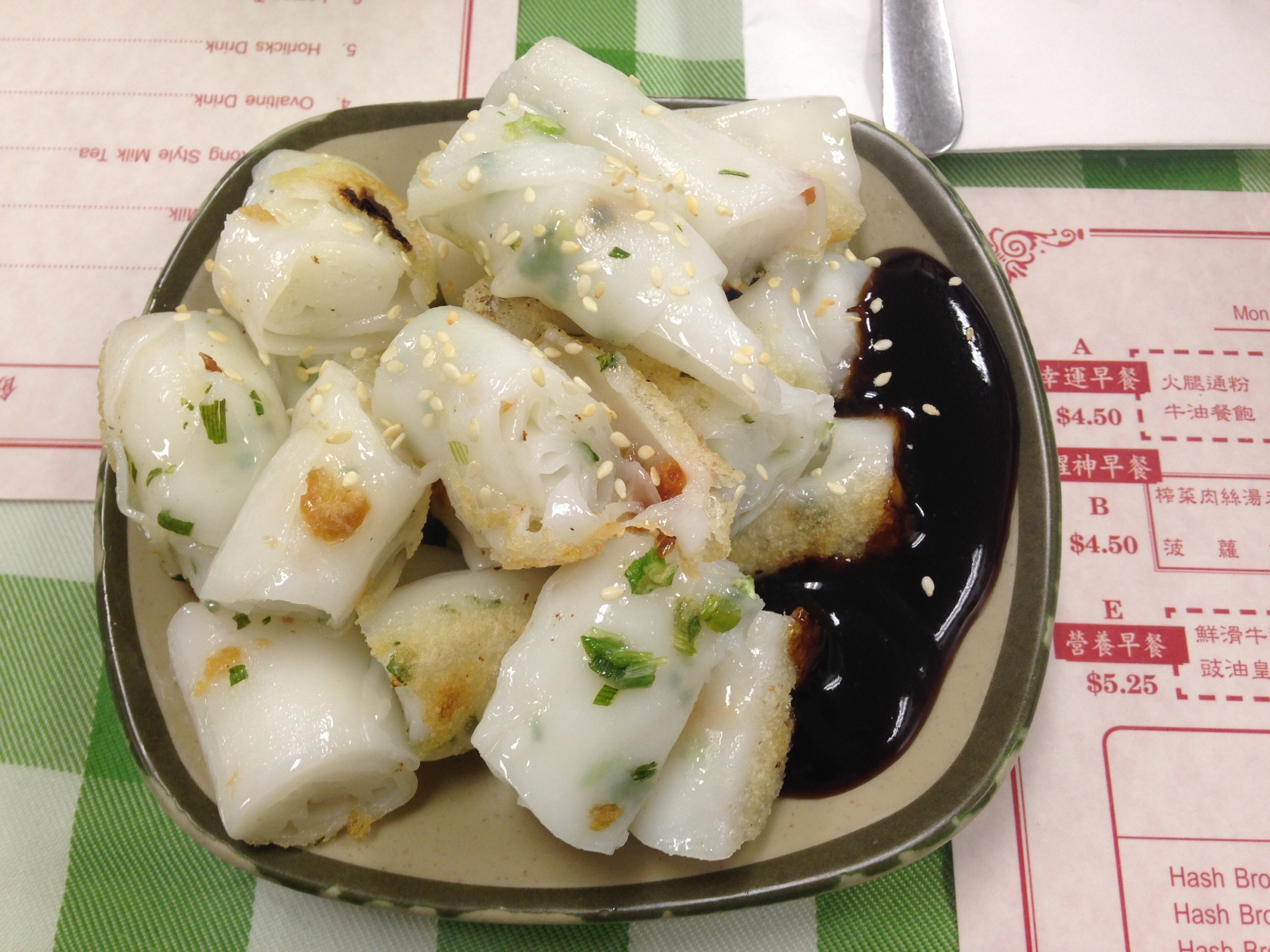 I also had panfried rice rolls (cheong fun) with a side of hoisin sauce— fresh chewy tops and crispy bottoms. 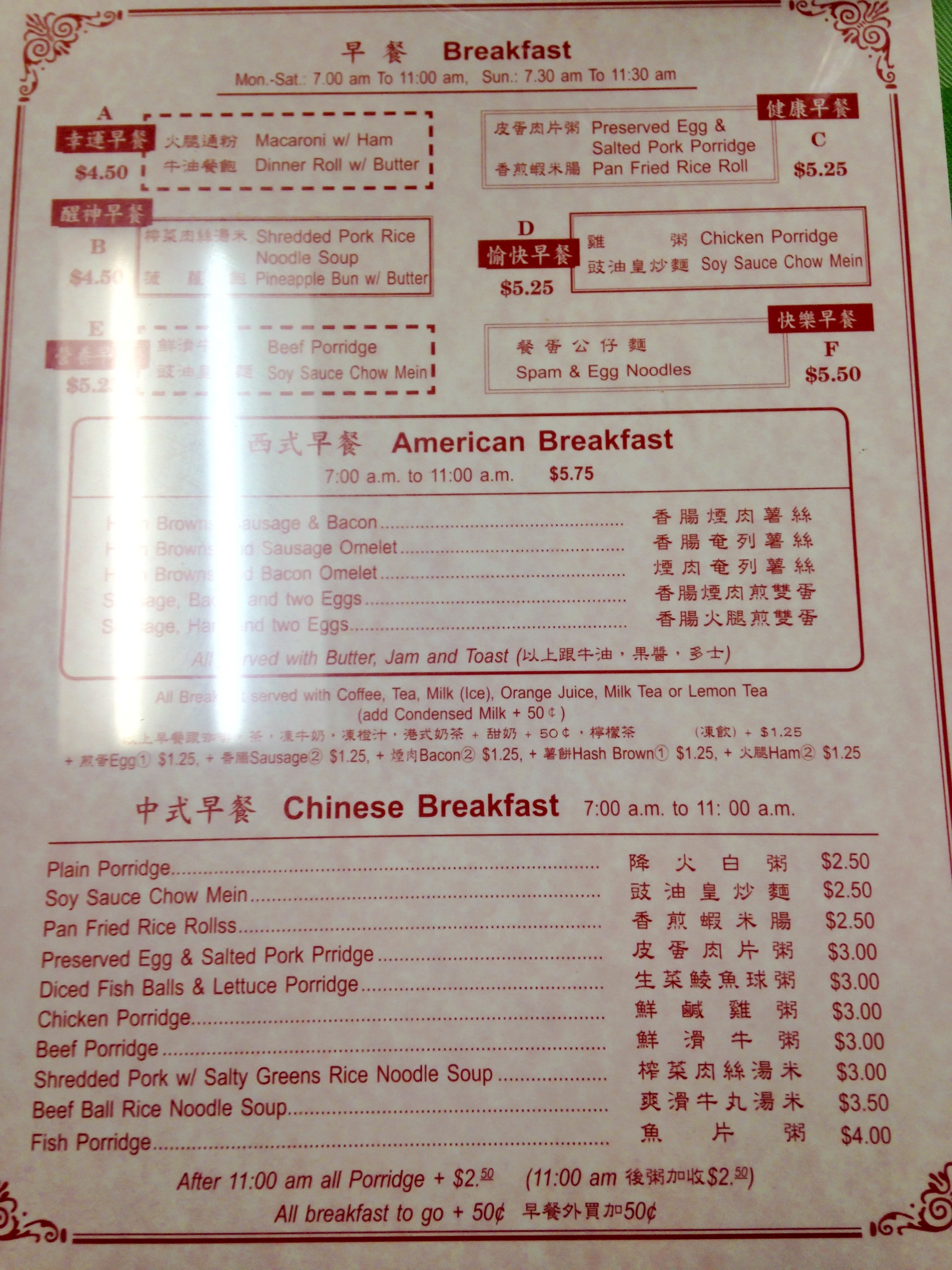 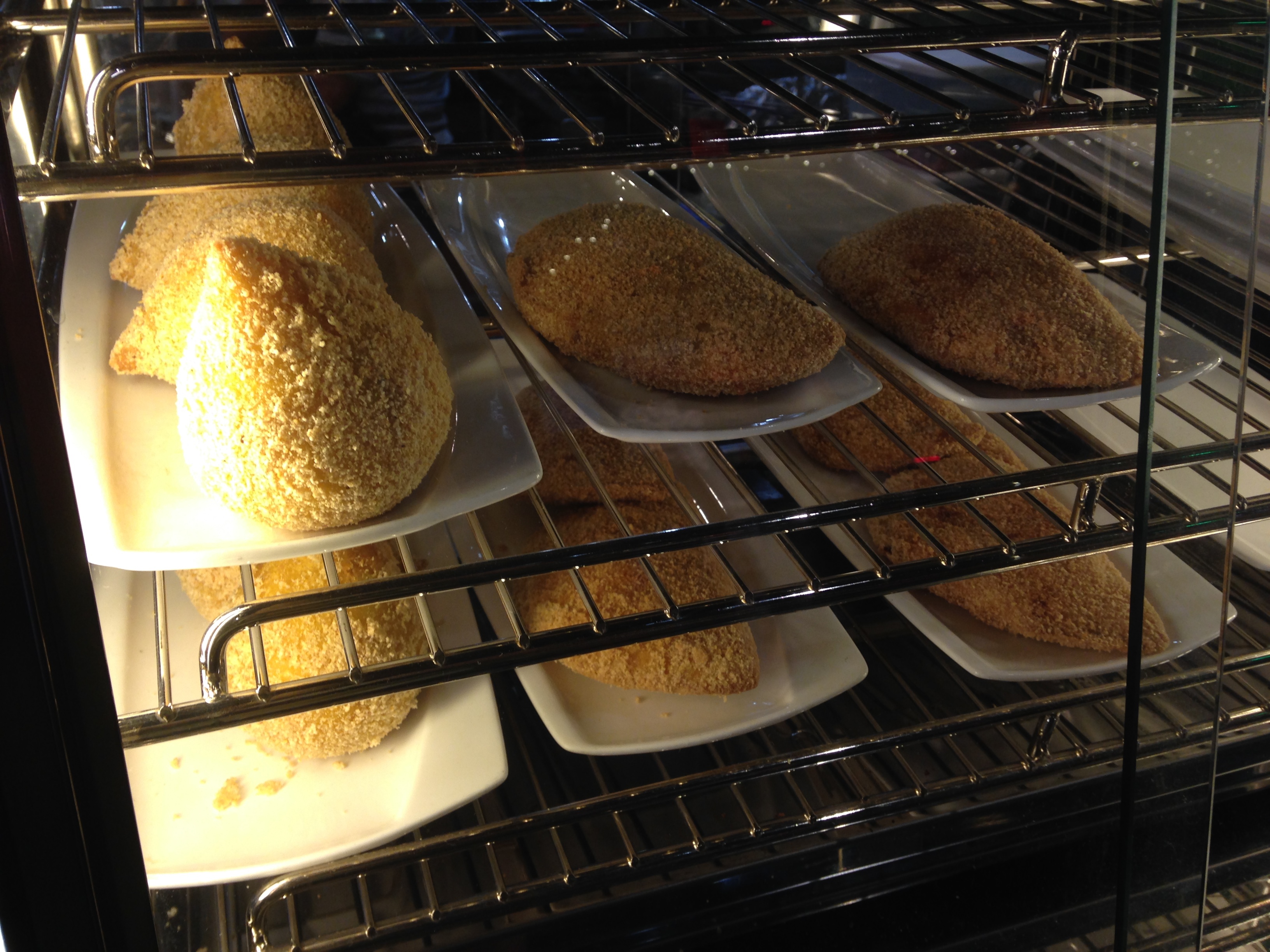 Pastel Brazzuca in Portrero Hill / SoMa has a few ready to go Brazilian pastries including house made pao de quejo (kind of like Brazilian could shar kind of like Brazilian gougeres made with yuca flour. The coxinha, A croquette stuffed
with shredded chicken, and the empanada shaped pasteles both use a yellow/orange dough that is crisp on the outside, covered with breadcrumbs, and pasty but firm Texter.

Ha, I’m in that area frequently yet never noticed any Brazilian cafe. It turns out it is inside the World Gym. Surprisingly highly-rated on yalp, and one of the few places in the area to try to track down feijoada (maybe on Saturdays?).

Pastel Brazzuca has a storefront on 16th, between Yoga Tree and World Gym, and a tree blocks much of its signage except “acai.” I’ve ignored it too many times!

Based on those y*lp reviews and its DeHaro address, it sounds like they also have an entrance abutting the World Gym that I hadn’t noticed. IIRC, they said they only do feijoada on Saturday— they’re closed on Sundays.

I liked the coxinha and the ham & cheese pastel, but wasn’t too keen on the ground meat pastel, which didn’t have much seasoning.

Craftsman and wolves opened up their third location (the den) in Bayview. 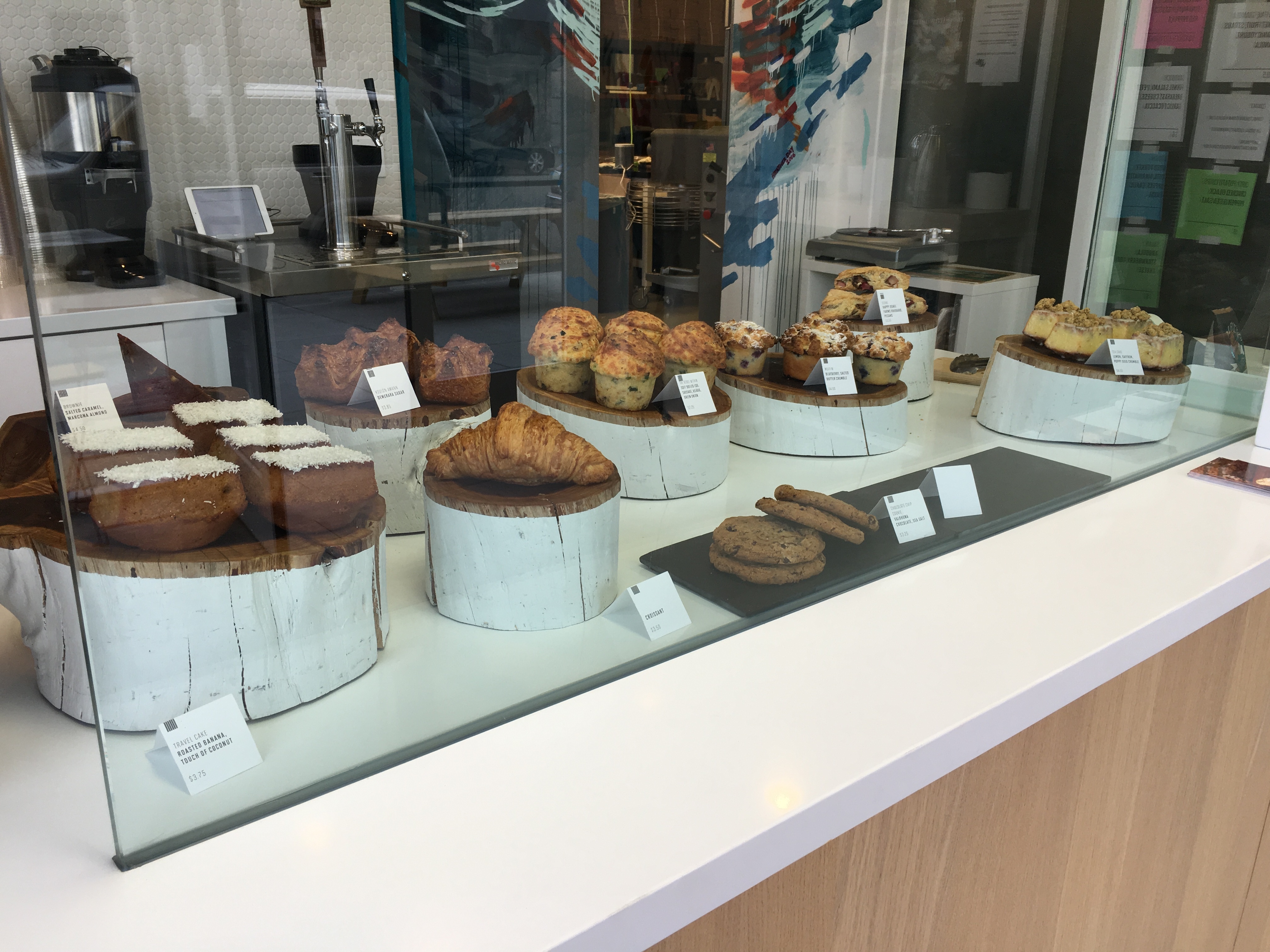 I tried Red House Bakery yesterday. Like hyperbowler, for the rice porridge, I liked the consistency and the distribution of green onions. I had the beef version; the beef was mediocre (about half the pieces had tendons attached). Overall, fine enough, though I wouldn’t go out of my way for this. Amazingly cheap though ($3 for porridge; about the same for a fine small plate of soy sauce chow mein).

I also tried Pastel Brazzuca recently. Had a pastel with chicken and cheese. It was good, and, though deep-fried (I wasn’t aware pastels are when I ordered it; I guess I should’ve known), wasn’t too greasy. The shell was rectangular and reminded me of fried crispy wontons (the kind you sometimes see on American Chinese salads, not at Chinese restaurants). It was the right size, leaving me a little hungry afterward, not weighed down, and the shredded chicken was pleasant and in a good balance / proportion. I might try some other items here.

Although Plow doesn’t fit your exact request, it opens at 7am and is pretty easy to walk into between 7-8am as a party of one. I’m not a western style breakfast person either, but all of the baked goods I’ve tried have been great, as have been the slow scrambled eggs and the Chinese Breakfast (not always ready that early). At that hour, the baked goods are usually warm, fresh from the oven.

The Lemon Ricotta Pancakes and Smashed Potatoes have lots of fans too.

Although Plow doesn’t fit your exact request, it opens at 7am and is pretty easy to walk into between 7-8am as a party of one. I’m not a western style breakfast person either, but all of the baked goods I’ve tried have been great,

Wow, I’ve avoided Plow because of the wait, but hadn’t realized they opened so early! Their porridge sounds good.

Speaking of porridge, I followed a good tip about porridge at Cafe St Jorge in La Lengua from @atomica . They also have lots of Portuguese baked goods and you can park in the Safeway parking lot.

I’ve had very poor experiences at Sunrise. Red Cafe is one of our favorite diners. Their cooks are very skilled. They actually know how to make decent scrambled eggs.

Panaderia Universal on Mission (near Cortland) opens at 0600! It’s a favorite of my daughter and husband, and the people who own it could not be nicer. (Might be cash only–not sure.)

What do you get at Panaderia Universal? I used to live near there and I was always intrigued by the inclusion of chow mein on their menu. Pan con chow mein, chow mein con frijoles.

Red Cafe is a fave of ours, too.

Never had chow mein there. My daughter likes all of the empanadas. Husband is working in NM at the moment, but I’ll ask him. It’s really their place–when I have weekend work, sometimes they’ll leave me behind and go there.

Piccolo Pete’s Cafe opens at 5:30 am, closes at 1 pm.
breakfast sandwiches and beverages to go at this tiny gem with limited seating at two 2-tops.
2155 Bayshore.
Visitacion Valley

Although Plow doesn’t fit your exact request, it opens at 7am and is pretty easy to walk into between 7-8am as a party of one.

Plow was busy at 7:30 AM, but there were plenty of counter seats and one or two tables available. I wonder how often they have the Chinese breakfast – – despite it being listed on their online daily menu, they didn’t have it today and the server seemed a bit annoyed when I ask her about it. She said they have it off an on without prediction.

The lemon ricotta pancakes were great, crisp exterior and curdy but set interior. 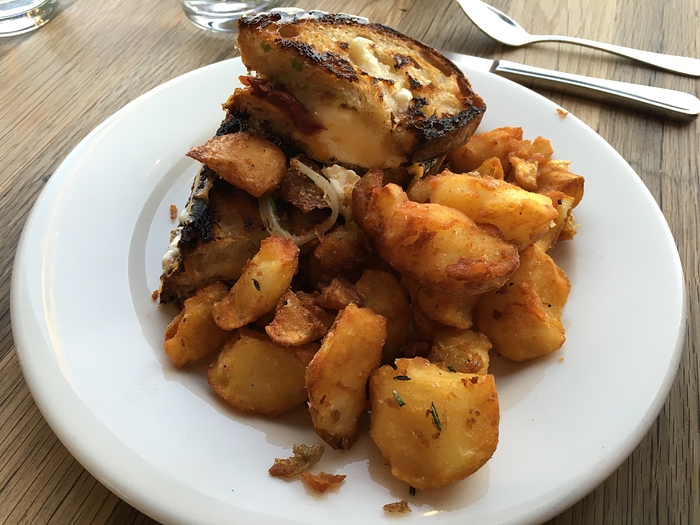 Potatoes were puffy and crisp, but lacking the flavor of the last time I had them. They were paler than the heavy skin and dark brown ones pictured in SF Weekly years ago or even Yelp photos from a month ago.

I recommend Amis Creperie + Cafe in South San Francisco. It’s a short hop off/on 101. they open early, at 7 AM M-F. If you arrive before 8 AM (IIRC), you don’t have to put money in the parking meters, and there is ample street parking right outside. They serve the crepes in convenient cardboard holders, which allows one-handed snacking.

The breakfast crepe with egg, cheese, and ham was very good: nice chewy “snap” to the dough, just the right amount of filling to let the crepe itself play the leading role.

The crepe suzette was excellent. The granulated sugar adds a nice crunch. 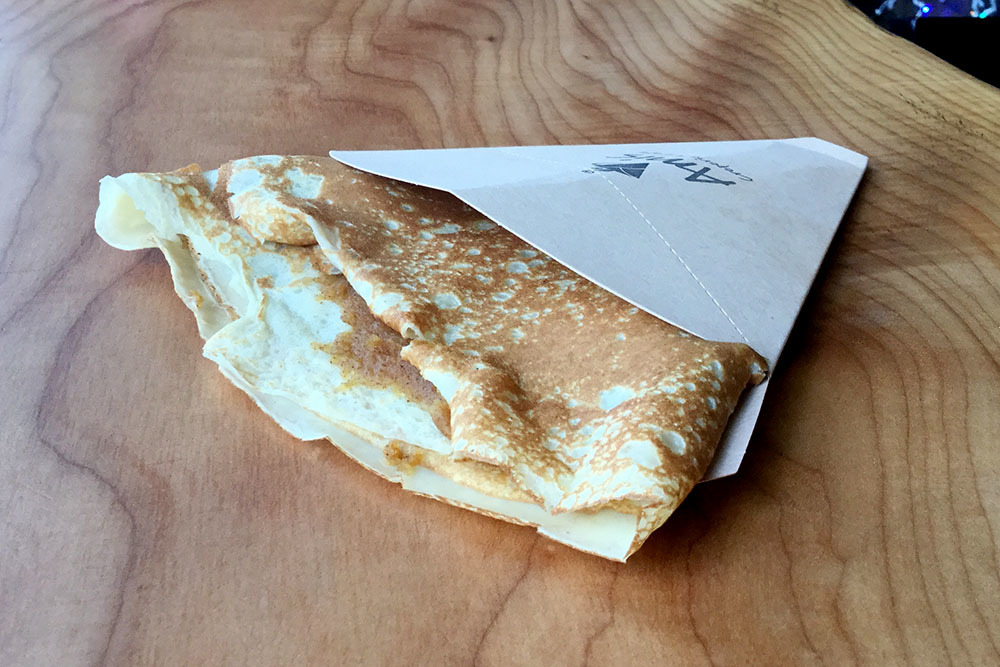 check out the Daily Specials as you walk in the door.

Banh Mi House on San Bruno Ave in Portola SF opens at 8 AM. I had two sandwiches from them yesterday and they were both tightly constructed and delicious . The combo had plenty of meat and enough pickles for balance, and not so much as to cause excess drippage— the Baker’s of Paris bread stayed crisp even a few hours later. 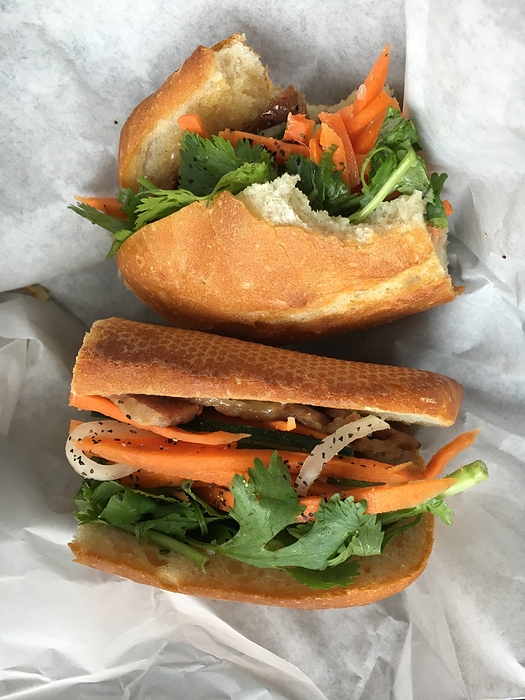