I feel like western New Jersey is very underrepresented here. I love the Frenchtown/Lambertville area. It is very picturesque, and although the food scene is loaded with restaurants, they are usually overpriced and very hit-or-miss. Here’s a review of a lovely Mexican restaurant I went to last week.

If I had to describe Cocina del Sol in only two words, I would say “fun” and “interesting”. It is located in the basement of Frenchtown’s historic Gem Building, which dates back to the 1800’s. There are a few tables street level for al fresco dining, but the bulk of the restaurant is underground. You make your way down a short stone staircase before entering a colorful and festive main dining area. The walls are painted in bright, loud colors. There is Mexican decor and a large painting of Pancho Villa on the wall. To the left is another dining area, almost hidden. There are plenty of exposed stone walls to give you the feel that you are eating somewhere historic. 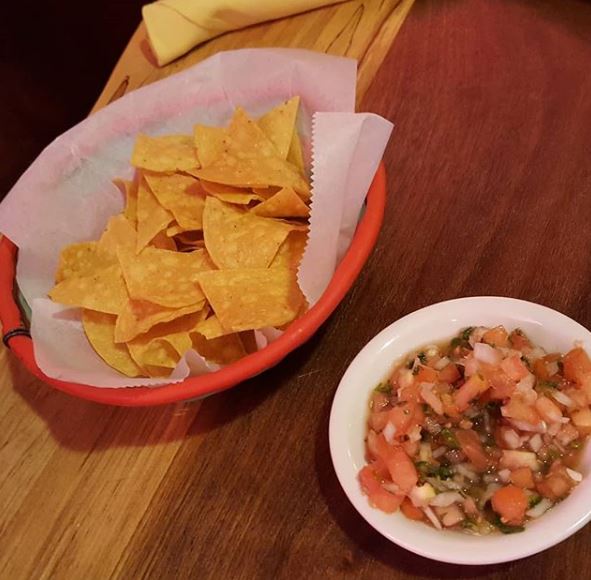 A complimentary basket of chips and bowl of pico de gallo hit the table as soon as you sit down. While this is commonplace in almost every Mexican restaurant, these were top-notch. The chips were warm and crispy, bereft of any grease or salt. The pico was delicious. Clearly homemade, it was more than just the average salsa you are usually greeted with. This was fresh and popped with flavor. It was the ultimate way to open the palate for the meal to come.

We were not starving and could not settle on an appetizer (they had limited offerings, and the prices were nearly as high as their meals), so we just asked for a side of guacamole. This was the perfect addition to the chunky pico, as this was smooth and creamy. It is important to note than Cocina del Sol is a BYOB, which is great considering the cost of drinks in this town can run high. They also boast an extensive menu of Jarritos sodas (probably around 20). Justin had a bottle of Mandarin Orange, while I wanted to try something totally off the wall: Tamarind. I wasn’t crazy about the flavor. It was so mild that there was hardly anything there—like drinking carbonated water. But that is no fault of the restaurant. 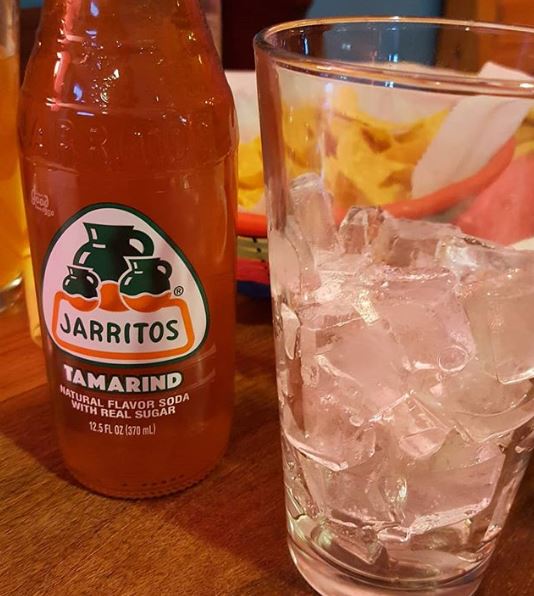 For meals, Justin had the chimichangas with chicken and I had chile relleno. Even on a Saturday, the lunch menu was available. It took more than 20 minutes for the food to arrive. This was fine because the end result was worth it. These were clearly two dishes which had been cooked with care and love. All too often I have eaten in Mexican restaurants and the food hit the table before I even closed the menu. I am left wondering, “How could you have even cooked it that quickly?” and then I remind myself that everything is probably pre-made and sitting around. Well, that was not the case here. There was an authenticity present. 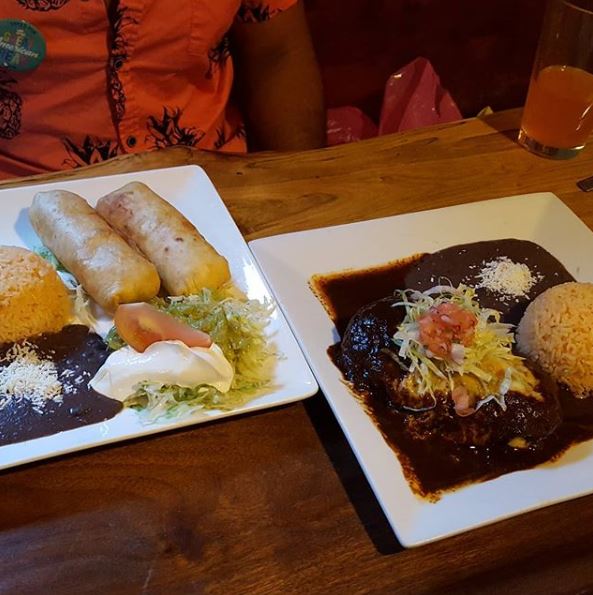 Justin’s chimichangas were crispy and there was no grease or sogginess anywhere to be found. I took a couple of fork-fulls and thought they were good. A nice mix of shredded chicken and cheese. It came with a side of salsa verde as well as lettuce, tomatoes, sour cream, guacamole, and rice and beans. I like how each bite crackled. As for my chile relleno, I was impressed. I have never ordered this item before: a poblano pepper stuffed with chicken and a blend of cheese, smothered in sauce. I was asked which sauce I wanted and responded by asking for whatever was their spiciest. They chose to top it with a mole-like sauce. It was brown, thick, and more on the bitter side. But that bitterness complimented the creaminess of the cheese well. This tasted like a true Mexican meal. The rice and beans on the side were also pretty good. 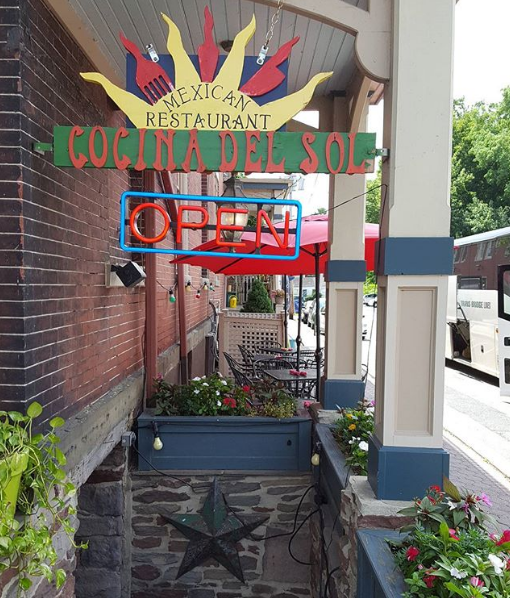 I cannot help but be pleasantly surprised that Frenchtown has a delightful Mexican restaurant, and in a basement no less. You would practically walk right past it if not intentionally looking for it. For lunch portions, we were stuffed. The pictures might not seem it, but that was a lot of food. My portion was one pepper. I read that the dinner version is two. I could not imagine a portion double what I had. There would have been leftovers. Our waiter was also very friendly and attentive. Overall, a 4 out of 5 stars for Cocina del Sol. I will definitely return!

If anyone wants to see the original blog post, it is located here.

I am so happy to see my hometown represented on your blog! I enjoyed many meals at Cocina del Sol too.

Next time you venture out to that part of NJ, I urge you to try The Lovin’ Oven. Slightly outside of the main drag in Frenchtown, but still walkable. Full disclosure, I used to work with the owner before she opened but it still holds the title as my favorite restaurant for breakfast/brunch.

I’m glad to see someone from your area on here! Me, along with about 90% of the NJ users (I estimate) are from the shore area/eastern NJ. What’s it like living in Frenchtown? And more importantly, where do you do your grocery shopping? Never seen a supermarket out there!

I’ve also done other reviews of your town. Please see the following:

And a feature on the nearby town of Pittstown and a new coffee shop that opened, Brew 362. 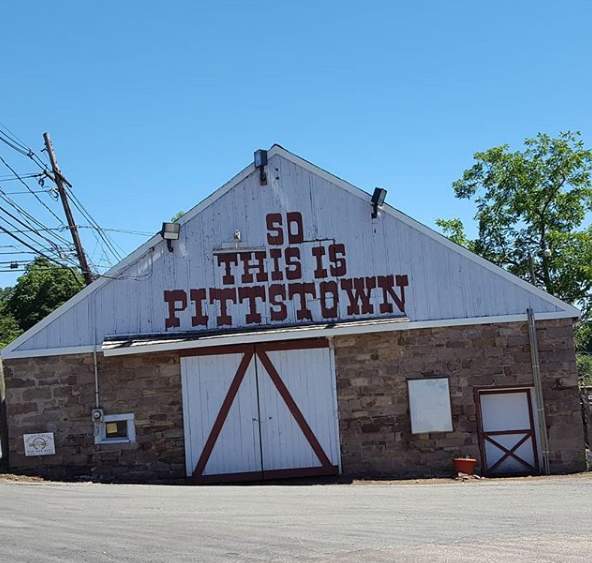 I grew up in the area and then lived in Frenchtown for 2 years after college. I now live with the rest of the 90%

There is a tiny grocery store in Frenchtown itself but I avoided doing my real shopping there. My parents still live in the area and do a weekly trip to ShopRite in Flemington. It is a good 20-25 minutes to a real grocery store so it does take a bit of planning. I will check out those other reviews.