Typical lists touting “Italy for foodies” focus repeatedly on Bologna, Naples, maybe the truffle-and-Barolo areas of Piemonte, and pretty places in Tuscany, but this useful list bypasses all of them for destinations much less well known but with some star gastronomic attractions. 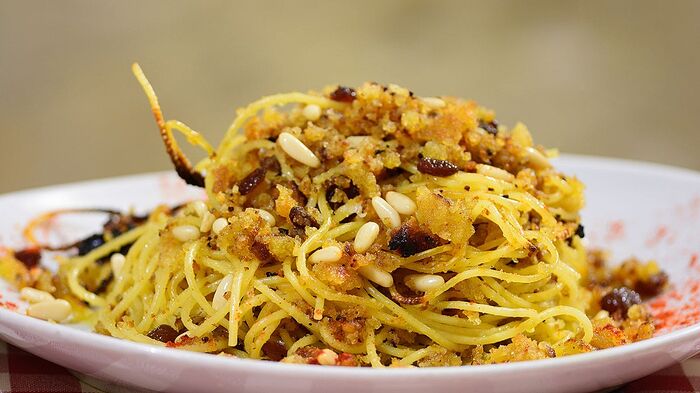 While the Mediterranean diet tends to be relatively healthy, these nine restaurants in Italy will have you packing on the pounds.

Note: the author, who is Italian or of Italian heritage, uses the historic name “Nursia” for the Umbrian town most people know as Norcia. Also, the article is presented in a way that gives the impression it is just a slideshow with a few captions, but if you scroll down, there is a longer entry for each destination named, including suggestions of where to stay.

Thanks for the link, interesting article.

It’s been a while I have been to Italy. The country is so big that food are completely different North from South. I did have good memories of sicilian food, their seafood, cured meat and ham, the cheeses and the sweets rested in my memory. Last christmas, I bought some excellent Pannetone from an Italian shop here that is made in Milan, very good!

Yes, but the funny thing is that Italy looks rather small on a map, compared with many other European countries and certainly the US. But the multiplicity of micro-climates, plus the long isolation of so many small towns from each other, guarantees this huge variety in traditional cuisines, and the locals really resist globalisation of their diet.

For me, pannetone is best sliced and toasted in a dry pan and eaten warm. The best of it is from Milano, and is an ubiquitous gift at Christmastime, but almost every region has its own special Christmas cake or sweet. One of my favorites is the colorful marzipan"fruits" and “vegetables” of Palermo 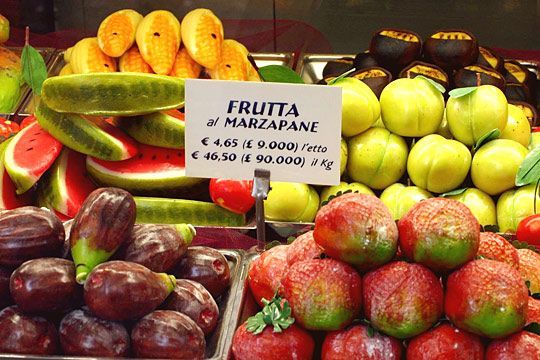 the multiplicity of micro-climates, plus the long isolation of so many small towns from each other, guarantees this huge variety in traditional cuisines

I have lived in Sicily for a year some years ago. Indeed, the locals resists changes! In fact an interesting fact is Italy they still keep their local dialect and everybody speaks italian (this point is very similar to China), so even nearby villages, cities view each other as foreigners, the southerners see the northerners (and vice versa) like they are from another country. I think it’s how they can have so big varieties in their cooking.

For me, pannetone is best sliced and toasted in a dry pan and eaten warm.

I will try to order some this year. I never tried toasted. Last year, mine was from Morandin. There aren’t a lot of Italian speciality shops in Paris right now. Eatly will be opened in 2018, I don’t how this will change the landscape of Italian food in Paris.

[quote=“HolyTerroir, post:3, topic:2352”]
One of my favorites is the colorful marzipan"fruits" and “vegetables” of Palermo
[/quote] They are eye candles too. Too cute and beautiful to eat. My personal favorites are the Cannoli.

They are eye candles too. Too cute and beautiful to eat. My personal favorites are the Cannoli.

I am less sentimental or aesthete than you! I slice them up and eat them with abandon! I love the taste, although they are very, very sweet, so it’s only possible to eat a bit at a time.

I agree with you that speaking dialect instead of standard Italian reinforces the isolation, which in turn strengthens the purely local food traditions. I was once talking to a woman who was born in Catania, but in her teens, her family moved to Palermo – and they couldn’t get used to the food! They found it much too rich and sweet.

It is remarkable in mainland Italy how physically isolated many places are from one another. It is really not a simple matter to know your neighbours in the region. It can take a long time to get from one area to another, even if you have a car. So it’s not like you are going to go shopping for a lot of ingredients that don’t grow where you live.

The North/South divide is still quite bitter politically, and in some of the autonomous regions of the far north, even children will tell you they aren’t really Italian, but are first and foremost loyal to their town and province. But wherever you go, people are very proud of their food, and with good reason I think.

In the article, there is a picture of “Assassin spaghetti”, do you have more information about it? It seems the spaghetti is “fried”.

A while ago, I bought some good Mozzarella di Bufala Compana, and also some cuor di burrata. The taste are much finer and more flavours than those Galbani supermarket stuff. I really like the Burrata which is very creamy and it melted in the mouth. I also bought a smoked Mozzarella, usually, I love smoke taste in food, but I wasn’t very hot about this one, as the smoke flavour was too overwhelming, and the texture was more a bit “rubber”.

I’ve never tasted it, but if you do a Google search for “spaghetti all’assassina ricette” you’ll come up with lots of recipes in Italian, and you can use Google Translate.

Fresh mozzarella di bufala from Campania is really quite strong and aromatic. Tastes like the barnyard to me! Sometimes the smoked cheeses can be too much, I agree, but smoked provolone is often good. One of my favourite smoked cheeses is smoked ricotta – but it is very hard to find a good version outside of Friuli-Venezia-Giulia, where it is used in lots of dishes.

I think it is not hard to make burrata. I’ve never tried, but there are lots of recipes online.

I also bought a smoked Mozzarella,

Do you have any leftover? If so, you might try this winter recipe from Napoli, which is pasta and potatoes, and smoked cheese from Campania

Pasta e Patate Soup is perfect for this Autumn weather.

Thanks for the recipes! Everything is eaten. But starting tomorrow and this weekend is the once a year Salon Saveur in Paris where many Italian producers will come. I will probably get some Italian cheese and smoked Provola for sure. Sun dried tomatoes will be on the list too.