Decided on a long weekend away from London and I have never actually been to The Cotswolds, despite it being not all that far from London. I will try and post the other places I ate but Jesse’s Bistro definitely deserves it’s own post.

It’s a small place in tucked away in a courtyard and it’s the kind of local restaurant that every town should have. The reason it piqued my interest is that it is a restaurant that grew out of a butcher’s shop but in the end we didn’t end up eating any meat. 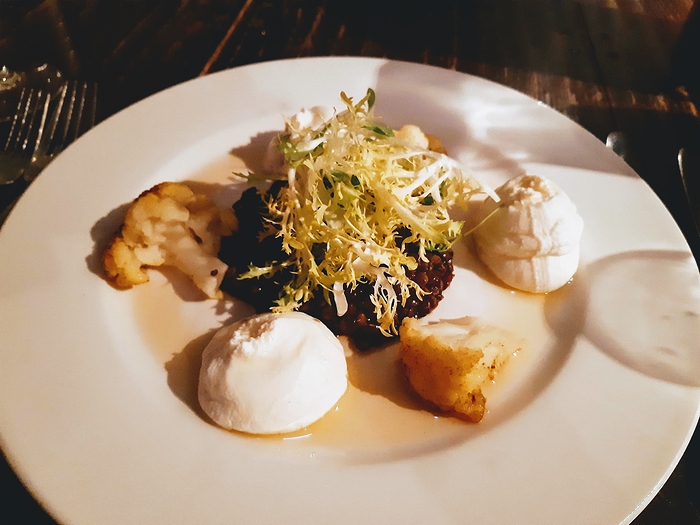 Ciren lentils.jpg4608×3456 1.55 MB
My starter was North Cerney goats cheese curd, roasted cauliflower, spiced lentils, curry oil. The cauliflower and lentils worked beautifully together and the curry oil was not overpowering. The curd gave a lovely creaminess. My only gripe was there was too much curd for the amount of cauliflower. Ciren salmon.jpg4608×3456 1.68 MB
The missus chose Severn Valley smoked salmon, compressed cucumber, kohlrabi, caviar, creme fraiche, baby leaves. I manged to try some and the salmon was cut quite thickly, which I liked. You would expect a lovely freshness from the kohlrabi and cucumber to cut through the richness of the salmon which is exactly what you got. A dish that tastes exactly as you’d want from the menu description. 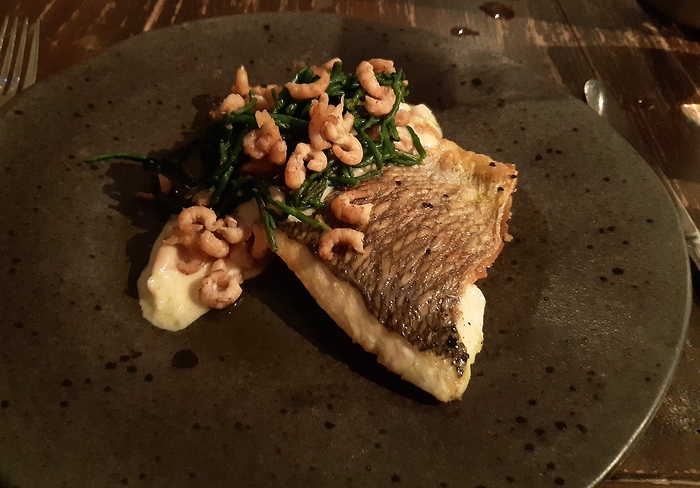 Ciren gilthead.jpg4160×2906 1.76 MB
I assumed I would be ordering meat for main what with them having a butchers shop. However they had one of my favourite fish on the menu- gilthead bream. This was a great piece of cooking. Crisp skin, which I ate all of , with perfectly cooked soft fish beneath. It came with brown shrimp and samphire, which were great accompaniments.Only issue is that it came with mash potato and I’m not a fan of that with fish . Ciren plaice.jpg4608×2873 1.96 MB
The missus also went for fish- plaice with pickled clams and fennel. She declared it perfectly cook and especially liked the fennel with it. 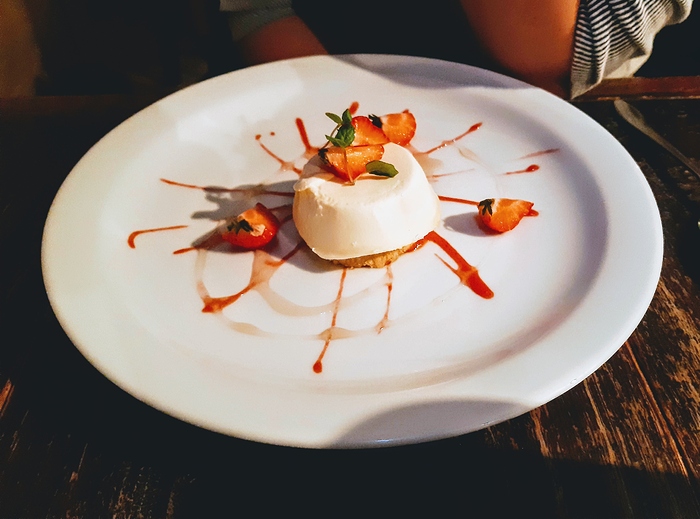 ciren pana.jpg4319×3207 1.15 MB
Panna Cotta for the missus. Now I love panna cotta but have had so many disappointing versions. Either it’s far too solid or they serve it in a bowl which takes out the skill of making a panna cotta that melts in the mouth but still stands up. ( I’m still searching one as good as the one with roasted peaches and lavender that I had at Babylon , Kensington Roof Gardens. ) I didn’t try it but I was informed that I would have found it too set but I have very high standards when it comes to panna cotta. 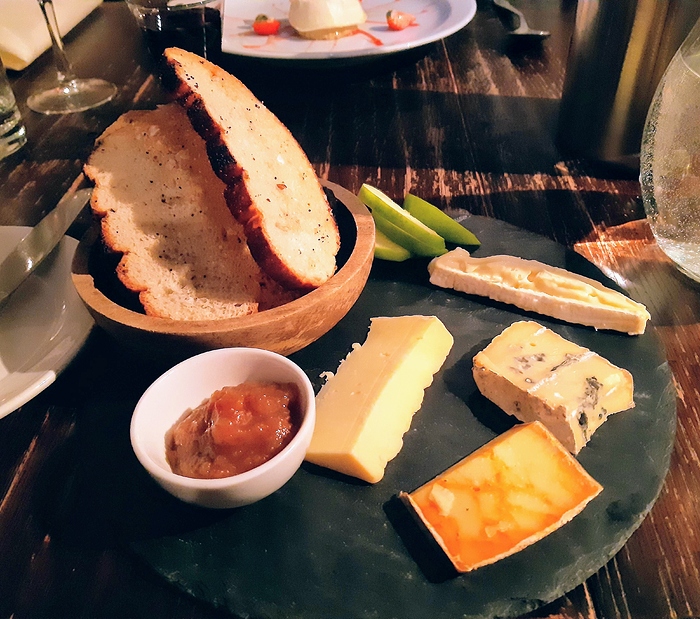 ciren cheeseboard.jpg3902×3456 2.55 MB
I decided on the South West Cheese Board Clockwise from the top; Bath Soft, Blue Horizon, Holy Smoked and Cornish Smuggler. My favourite by a long way was the Bath Soft , a very ripe brie type cheese. I hadn’t actually ordered the Holy Smoked (a smoked Single Gloucester) not being a fan of smoked cheese but had wanted Devon Oke. It was the only misstep in the whole meal.

Service was friendly and unobtrusive as it should be.
All in all a very good meal. Nothing revolutionary but good cooking with good ingredients in dishes that make sense. Not as common as perhaps it should be. If I lived in Cirencester I’m sure I’d be a regular and count myself lucky.

Good report, mate. I reckon plaice is such an under-rated fish.

I like your wife’s plaice but prefer your starter. Everything looks and sounds nice.

Used to scoff at plaice but I eat it now. Flatfish have got so expensive these days, even plaice, I refrain from buying my favourite brill every week. Besides, they used to be a lot more common. “Used to be” as in only last year.

This meal/restaurants is right up our alley. I’ve never seen “gilthead” bream here in the Boston area but I have seen “sea bream.” I wonder if they the same variety of bream. And I’ve only had plaice in fish and chips, but never quite so elevated, as @Harters implies. That’s cool. I wonder if it’s plentiful in your corner of the world. I don’t think I ever see it here.

Yes, pretty common in the UK. Very reasonably priced and stocks are now at sustainable levels. When I was growing up in the 1950s and 60s, my recollection is that it was pretty much the only fish Mum cooked at home.

Lovely!
Should you visit the Cotswolds again, I encourage you to stop at a tea room and try some Lardy Cake

I’m slowly working my way through all the regional baked goods in the UK.

Hope it is ok with the admins that I link to this very old thread I started over a decade ago.

I’ve never seen “gilthead” bream here in the Boston area but I have seen “sea bream.”

Gilthead bream is Dorade, Daurade, Dorada, Orata and Tsipoura. (Or adding the gold-colored meaning to the Latin -based words for the fish. ) It is on most Greek, Portuguese, and many Italian and French resto menus.

Other breams are not gilthead, and are often cheaper. There is red sea bream, and others.

If I see bream or sea bream listed on a menu, but gilthead is not specified, I assume it’s a cheaper porgy/bream.

Ps Dorado in Mexico is the term for Mahi mahi or dolphinfish, whereas Dorada is the Spanish term for Gilthead Bream.

I’m slowly working my way through all the regional baked goods in the UK.

Have you caught up with the Chorley cake yet - the “hard man” cousin of the Eccles cake?

I see it’s nearly a decade since I recommended folk to it on your linked thread.

It is on most Greek, Portuguese, and many Italian and French resto menus.

A regular menu item in the bits of Spain I visit regularly.

Have you caught up with the Chorley cake yet - the “hard man” cousin of the Eccles cake?

Still haven’t had a proper Chorley Cake. I will move it to the top of my list for my next visit. Hopefully in 2020.

I’m also working my way through regional sweets in Bavaria and Tyrol. I checked Prinzregententorte off my list last March.

It’s very localised. Chorley itself is 30 miles north of me and I presume it’ll be easy to find it there. I usually buy mine at Bury market (which is on the other side of the Manchester metro area to me). Bury’s definitely worth a visit for anyone touristing in the northwest.

And, if you’re in the northwest, you’d want to go up to the Lake District for Grasmere gingerbread - https://www.grasmeregingerbread.co.uk/

And be on the lookout for sticky toffee pudding - it was invented in the Lakes.

And, if you’re in the northwest, you’d want to go up to the Lake District for Grasmere gingerbread - https://www.grasmeregingerbread.co.uk/

And be on the lookout for sticky toffee pudding - it was invented in the Lakes.

I missed the gingerbread when I was in the Lakes in 2008. Next time.

I have had a couple dozen different Sticky Toffee Puddings in the UK and in Canada. It has been a fairly popular dessert here for about 10 years, probably one of the top 10 desserts you see in pubs and gastropubs, as well as in upscale restaurants that aren’t trying to be French or Italian in Ontario. I tried a few versions in the UK last year (London, Cambridge, Oxford, Peak District). I only spent 2 nights in the Lake District, in Windermere, in 2008, and while I remember having some Cornish crab and Manx kippers, I can’t remember having any sticky toffee pudding or any other desserts.
It’s a delicious dessert, for sure. So many variations, too.

I would like to spend more time in the northwest, and I’d like to visit more of Wales and Scotland, too, on future visits.