To my mind, Manchester has three main food shopping areas. There’s the South Asian supermarkets along Rusholme’s “Curry Mile”, Chinatown in the city centre and, for more European based food, there’s Chorlton.

For a variety of reasons, Covid being the main one, we haven’t been for a goodly while and knew there had been a couple of recent openings that we had to have a look at.

First up, was Lily’s Deli. Lily’s restaurant in Ashton under Lyne is a long time favourite of ours for vegetarian Indian food. It now has a deli and this is an offshoot of that. We bought a small box of about eight different Indian sweets (which will kept a secret from my diabetes nurse). There was also a pack of Manglori Mix – presumably something similar to the more common Bombay Mix. And a couple of packs of poppadums which will just need to go under the grill for a few seconds.

A few steps further along is the fairly long established Unicorn Grocery – completely vegetarian. Lots of dried pulses, dried fruit and the like. They also stock Zaytoun – the organic Palestinian olive oil that I regard as the best I know. They also do a fine range of fruit and vegetables – often organic, often very locally produced – I think the radish came from Sale about 3 miles away.

Across the road is the Barbakan Deli. Opened in 1964, it majors on a vast range of in-house made bread. We bought bagels, barm cakes and a couple of Danish pastries. There’s also a large deli counter selling charcuterie, cheese, olives and the like.

Out of the Blue is the best fishmongers I know in the area. And, yes, we should go more often rather than relying on the supermarket. Today, it provided us with a piece of tuna, a smoked haddock fillet and a couple of mackerel.

The other new opening is the Chorlton Cheesemonger. It’s a couple of doors down from the fishmonger. They have a fab selection of mainly British cheeses – but we’d spotted on their website that they sell a couple of Irish ones that took our fancy. Gubbeen is one of those semi-soft cheeses that remind you of French production. We first came across this when we had a holiday near Cork a few years back. The other is Coolea, also produced in Cork. The producers are Dutch, moving to Ireland in the 1970s, and they produce their cheese in the style of Edam or Gouda. You’re not going to find either outside of a specialist shop or online purchase (which is what we’ve been doing for the Gubbeen since the first lockdown).

And finally, we went to Frosts the butchers. We bought a pack of four lamb rumps – each big enough for a meal for the two of us. It’s very much a restaurant cut of meat and not something you see in a local butchers.

In amongst this shopping, we had lunch. Chorlton is home to a goodly number of small independently owned restaurants and bars but, for lunch, we find it hard to look past the Chapati Café. It’s a slightly more refined suburban version of the “curry cafes” in the city’s Northern Quarter. But they still follow the classic “rice and three” – big plate of rice and your choice of three curries from the day’s selection of six (three meat based, three vegan), plus maybe a special as well. The refinement comes as it’s served on a thali tray, with rice or chapatti, a little salad and chutney, rather than heaped up on paper plate as the city places. Price varies depending on the ratio of meat to veg in your choice. In the photo, from left to right, you’re looking at lamb with spinach, aubergine with tomatoes flavoured with paprika and Giloda (also known as ivy gourd). There’s the rice, salad (mainly cabbage) and tamarind chutney 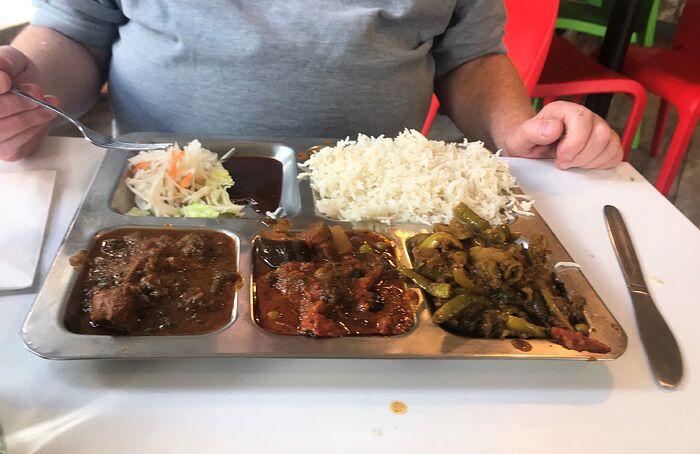 In the photo, from left to right, you’re looking at lamb with spinach, aubergine with tomatoes flavoured with paprika and Giloda (also known as ivy gourd). There’s the rice, salad (mainly cabbage) and tamarind chutney

Disappointing news that the Chapati Cafe is to close.

They recently opened a second branch at Media City, in Salford, and that will continue. Presumably, it has a more footfall than Chorlton.

The owners cite a combination of increased costs, staffing difficulties and unspecified family issues. So, it looks like I’m back to the Northern Quarter curry cafes for a “rice and three” fix.

I haven’t heard the term “Giloda” after my grandmother passed - for some reason we all call it “Tindola” which is the more common name, odd that we didn’t just use the term she was using when we mostly ate it at her house. Made me think of her, so thank you.

Disappointing news that the Chapati Cafe is to close

That’s a pity, for a local favorite. Is the other branch too far for you to get to, or just out of the way vs normal course?

Loved the description of your walk around.

Just out of the way - and expensive parking.

I could get the tram there but it’d be easier to get it into the city and have lunch at one of the original “rice and three” places.

Maybe something new and exciting will open up in the space.

This term is funny to read as context for an Indian meal, because in the US there’s “meat and three” in the midwest and elsewhere for a “typical” meal.

I may have written about the curry cafes before and, if so, apologies.

From the early 19th century , Manchester was the centre of the UK’s cotton trade and, by the latter part of the century, the city was known as Cottonopolis. The warehouses and offices of the major players were in what is now known as the Northern Quarter. And garment making companies sprang up on the back of the main industry. My father spent his working life there. with a company wholsesaling women’s coats. They were made by small “sweat shops” all around the Quarter, originally often with Jewish immigrant workers. Later, from the 1970s, Pakistani immigrants took over the jobs. And the curry cafes were started up, effectively as canteens for the Asian workers. Nowadays, hardly anything is made in the Quarter and the lunchtme customers are now generally Anglo. They still do very good business.