We used to enjoy going to Mary-Ellen McTague’s old restaurant in Prestwich, although it always divided us a bit and it’s fair to say that I was keener on it than my partner. It’s also fair to say that the Creameries divided us, but the positions are reversed with my partner being the keener of the two on our evening. We did agree on the positives and negatives, although we gave different emphasis to them.

As for the positives, service was engaging and friendly. And the food was generally good. And they’re only charging £35 for their set dinner, or supper as they call it (no, it’s not a Rich Tea biscuit and a glass of milk before going to bed).

But there are negatives. They’ve done their best to make the room as attractive as possible but, to me, it still looked like it was an old storeroom, given a coat of emulsion and decorated with a few plants and photos. And, let’s be frank here, bench seats are never going to be comfortable. They’ll be OK if you’re having a quick lunch in a noodle bar but if you have to sit on them for getting on for 3 hours to have dinner (sorry, supper), it is damned uncomfortable. And you’re sitting there for getting on for 3 hours because there are big waits between each plate of food being brought.

It’s set menu with alternatives only at starter and main course, where there is a vegetarian dish or an omnivore one. There’s some snacks to start. A cheese gougere was really tasty, using Old Winchester – I’ve had it elsewhere and recall it being like a mature Gouda. Then there’s a single bite of nicely seasoned potted rabbit on bread and, for my partner who isn’t keen on game, their “chips” made from split peas crispy fried, with mushroom ketchup. A sharing plate of lightly pickled vegetables is next – beetroot, kohl rabi and something now forgotten. At this point they bring bread, two slices each of a good sourdough. The bread is very welcome. You’ve been sat there for the best part of an hour and really only had two mouthfuls of snack to eat. You’re hungry! This fills you up a fair bit. Which is a good thing as the “proper” courses” are, disappointingly, of general tasting menu size and, without that carb, you’re going to go away wanting a bag of chips on the way home. In fact, you may want chips afterwards in any event.

There’s then a small fillet of smoked mackerel, perfectly cooked. It comes with a very poky mustard cream, pickled beetroot and the crunch from a couple of rye bread croutons. A successful take on North European flavours. Beetroot makes another appearance as the star of the show in a soup, enhanced with smoked apple and a swirl of sour cream. More successful North European food.

A main course plate of roast pheasant was, frankly, miserly even if this had been an actual tasting menu. Maybe four wafer thin slices. Cavolo nero works well here. A liver parfait perked up the flavours here but it didn’t have the absolute smoothness of texture that you might expect. For the non-game loving partner, there was a potato and shitake butter pie – a Chorlton take on the traditional Lancashire pie which usually just has potato and onion in it. And it’s absolutely delicious. Cavolo nero also works well.

For dessert, there was the intriguingly named “Quire of Paper. It’s not a stack of 24 leaves but two small, crisp pancakes, which top a quince custard – lightly fruity and not overly sweet. There’s a roasted damson and a sprinkling of almond brittle. It’s the sort of dessert which made you wish The Creameries charged a bit more and gave you decent portions.

Jay Rayner reviews the Creameries in today’s Observer. He liked it more than I did. Neither of us are going back, though. 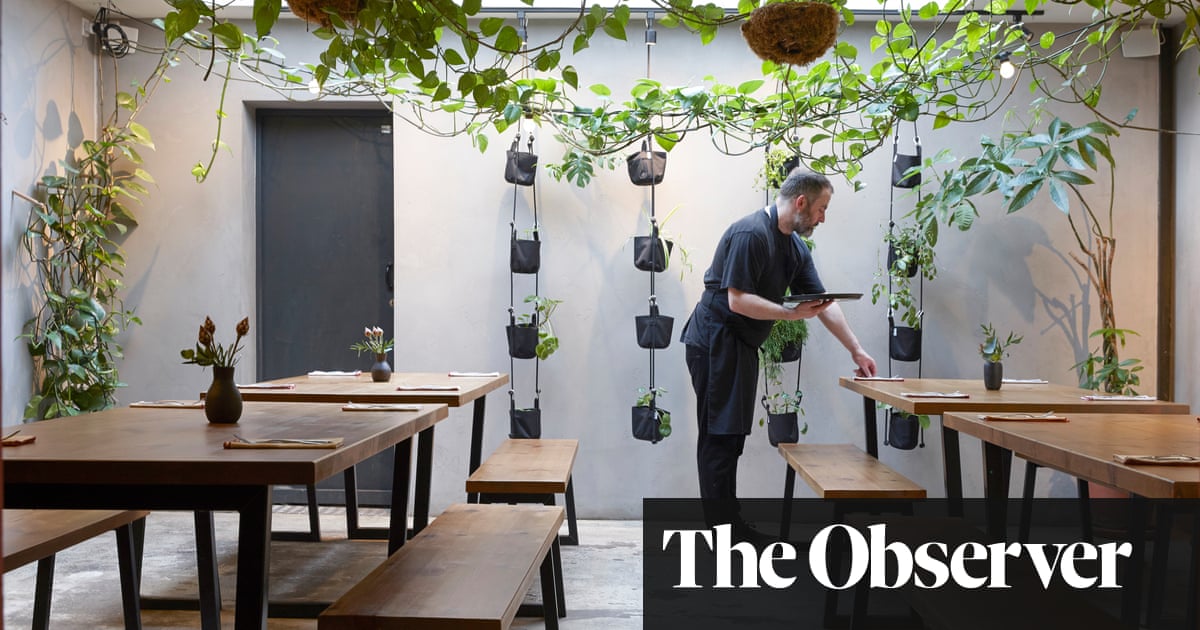 For sheer tehnical virtuosity and ridiculously good value, have a meal at the Creameries

I love Jay Rayner’s reviews. As well as yours, of course. Thanks for posting the link

And a relevent mention for this thread, seeing as I mentioned “supper” in my review. It has different meanings in the UK depending on geography and social class. Rayner uses it in the middle class style of the south of England for the meal most of us call dinner (although for some Brits dinner is what you eat at lunchtime and the evening meal is then “tea”). But for me and, I suspect many northerners, supper is a snack you have before going to bed. Foreigners need to be aware of these differences just in case some Brit invites you round for supper, if you get my drift

@Harters
In the Prairies, especially in farming communities, dinner is the mid day meal , and supper is the evening meal (between 5 and 7 pm). At some Prairie wedding receptions I have attended, the midnight buffet is called the midnight lunch!
In Ontario, quite a few people who are older Canadian stock (3rd + generation), especially in smaller cities outside the Greater Toronto area call their evening meal supper. But the Canadian supper is a full -sized meal, not a snack, and it usually includes meat, starch and veg.
I’ll see if I can find a copy of his book.

One of my four books is a history of food during the Great War. In those times everyone in this area (northwest England) seems to refer to dinner as the midday meal. In the army of that time, it is when a full meal was served. The late afternoon or early evening fooid was “tea” and would be bread and jam, or similar.

The concept of the main meal being in the middle of the day, and called dinner, lingers on. Even though these days everyone calls the meal lunch, on Christmas Day, everyone has “Christmas dinner”. And the staff in school kitchens are still known by everyone as the “dinner ladies”.

One of my four books is a history of food during the Great War.

Ah, so this is one of your books: 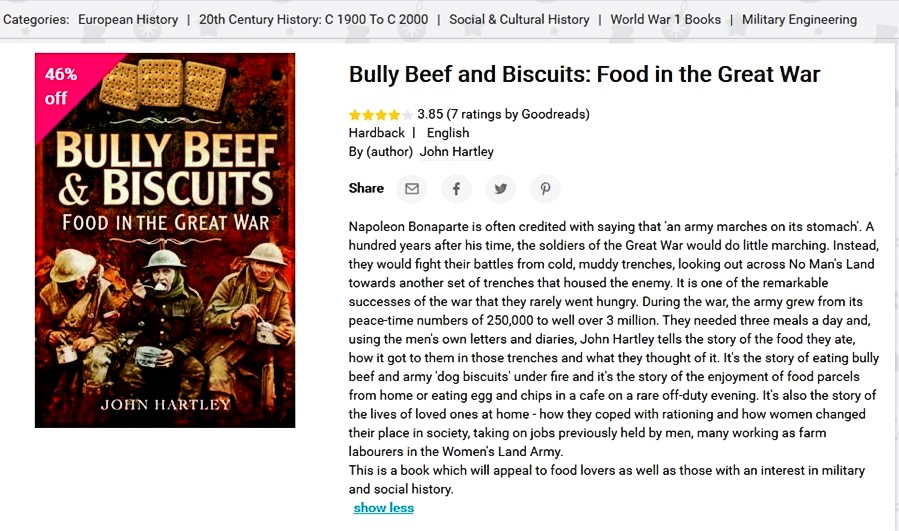 Bully Beef and Biscuits: Food in the Great War by John Hartley, 9781473827455, available at Book Depository with free delivery worldwide.

One of my four books is a history of food during the Great War. In those times everyone in this area (northwest England) seems to refer to dinner as the midday meal. In the army of that time, it is when a full meal was served. The late afternoon or early evening fooid was “tea” and would be bread and jam, or similar.

We certainly have many Canadians whose ancestors came from the northwest of England (as well as other parts of England, Scotland , Wales and Ireland), so there will be some words and customs that will be more common in parts of Canada which continue to have a stronger British (and Irish) tradition.

We have nearly 3000 men (and one woman) commemorated on my borough’s war memorials who died during the Great War. Over 30 were serving with Canadian forces and will, almost certainly, be first generation immigrants. Bound to be others where the immigrants were earlier generations.

Erich Maria Remarque’s “All Quiet on the Western Front” was one of the prescribed texts for English literature when I did my matriculation in Australia back in the early 80s. As a 17-going-on-18, imagine my horror at the thought of young men my age being sent out to die in the trenches during that time, all for the glory of king and country.

On a separate subject, it’s rather fascinating that the term “bully beef” was rather unfamiliar to us in this part of the world as a reference to corned beef. Generations of children in Singapore and Malaysia who grew up on Dandy (and Beano) comics would only know Bully Beef as the cartoon character!! 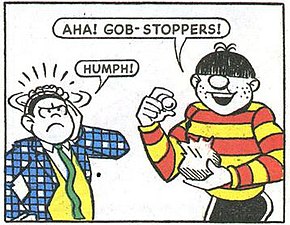 imagine my horror at the thought of young men my age being sent out to die in the trenches during that time,

I have a friend who acts as a guide for school trips to the battlefields. Before the trip, he visits the school to give a talk to the students, aged 15/16. He reminds them that, if this was 1914, they were going to be conscripted into the army in a couple of years and that some wouldn’t be coming home.

“Bully beef” wouldnt be a very familiar term to Brits, either. I can’t really remember it being used until I became interested in the war, when it is a very common term amongst soldiers (not least, as it is often what they are eating day after day, when in the front line trenches, so gets lots of mentions in letters home).