Chinese in the DC/DMV area?

I just learned that Full Kee is now on Columbia Pike in Falls Church. They still have that wonderful Hong Kong style noodle sou and other great dishes.

Interesting. I looked at a photo and I think it is still the same place I was last in probably 20 years ago at least. I’m wondering what connection it now has or ever had to the other (now gone?) Full Keys, like downtown, but what difference does it make anyway. Enjoy and let us know what you think.

This Washingtonian article, from way back in 2006, says the Falls Church Full Kee was then run by the same team that ran the DC Full Kee.

From Best of Falls Church 2004 Diners familiar with the...

They certainly were the same ownership back in the day, and to this day both menus are almost identical. When the DC location was closed for refurbishment, they referred folks to the VA location. They have separate websites.

I thought that the Virginia location was never quite as good, and they never offered one of my favorite dishes, duck stuffed with shrimp paste. I have heard the DC location these days is hit or miss, but still worth considering.

My experience with the Falls Church Full Kee was the same as Steve’s. I was a regular for a while, but it always seemed a little dull.

Chinatown DC has mostly been off my radar screen for years now, but about 5 years ago a large group of friends went to New Big Wong and had an excellent meal. One of our group had grown up in Hong Kong and got them to bring us several off-menu items.

But my favorite places for Chinese are mostly the same as have already been mentioned here – A&J, Mama Chang (the best), Northwest China, Bob’s Shanghai 66 in Rockville. But I’d add Panda Gourmet in Northeast DC, Yu Noodles, which is on Lee Highway in Fairfax, and Hong Kong Pearl at Seven Corners in Falls Church for dim sum.

Hong Kong Palace in Seven Corners is more hit and miss than it used to be but you still can usually get decent Sichuan there. Sichuan Pavilion on K Street NW in downtown DC also has serviceable Sichuan food (which is oddly far better for eat-in than takeout). Old timer Peking Gourmet Inn on Route 7 in Falls Church is also still decent.

I know Steve has a deep knowledge of the Rockville array of Chinese restaurants and can add a lot to this list. Sichuan Jin River was excellent the one time I ate there (a long time ago) and a friend whose husband is an immigrant from China says he views it as the most authentic and best of the Rockville restaurants.

Sichuan Jin River continues to be a gem and the most varied and exciting of the Sichuan choices.

Hong Kong Palace still puts out some super high quality food, but is far more limited and some of their landmark dishes are not being offered, at least for now.

Kung Fu Kitchen in Alexandria (don’t sleep on their chinese lettuce dish) and Yong Kang Street in Pentagon City for noodle soups (but not the dumplings!).

In Fairfax, Nanjing Bistro for lions head meatball, tofu with 1,000 year egg and cabbage stir fried with fermented shrimp, one of my favorite meals in the DC area!

FlemSnipes: “… a little dull.”
Me: “Yeah, I have to try that! “
And shockingly it was kind of flavorless. Color me surprised. LOL.
I was in Annandale and hungry so I gave Full Kee a try. I used to love all the soups at XO Taste on Rte 50 and after the change of ownership several years ago, XO has never been as good. So I figured I had nothing to lose so I tried the Shanghai Roll and the Hong Kong Style Shrimp Dumpling and Noodle Soup.
The Shanghai Roll looked and tasted like a vegetable roll, not bad though a touch greasy.
The HK Shrimp Dumpling soup was ok but kind of one dimensional. The dumplings did have a nice shrimp kick to them and the noodles were ok but the broth was lacking.
A solid “ok”. Not a great meal though. But at $19 total before tip, not a terrible deal. 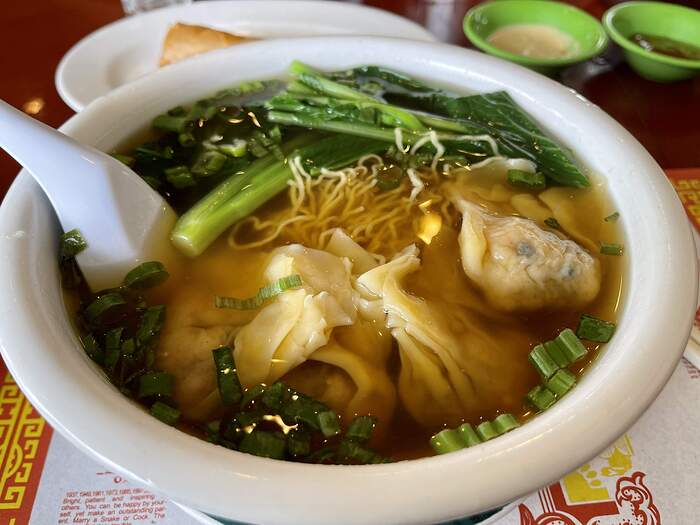 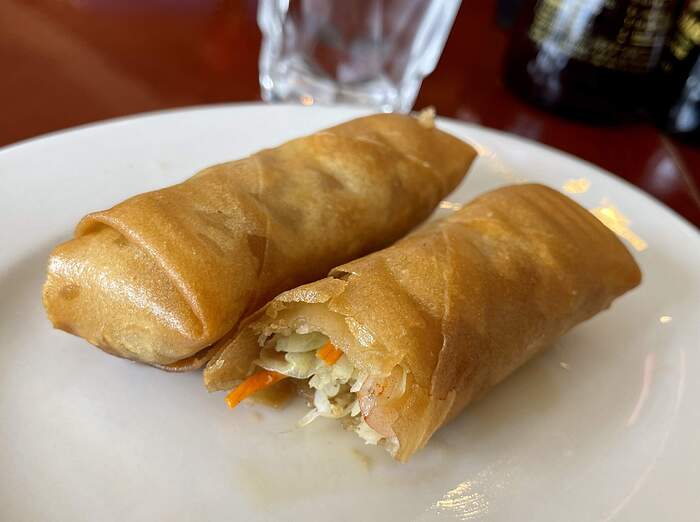 Wow! The broth used to be stellar. Sic transit gloria. Sigh. Oh well, you saved me a trek to Falls Church.

John, I wonder if chefs/waitresses assign a spice/flavor profile to guests, I.e. waitress tells chef “this is for a whitebread old dude, tone the spices down!” And I end up w a mild Hong Kong Noodle Soup.
Or, conversely, “I recognize this guy, he isn’t Chinese but he likes it spicy, don’t dumb down the spice level.”
Could that be a thing? Because when I go to a Thai or Chinese restaurant where the waiter/waitress and I recognize each other it seems like I get spicier food. Or it could be me overthinking it.
Flip side of the coin, I went to Hong King Palace at 7 Corners a while back and when the waiter asked me how I liked my Cumin Lamb prepared I said I liked spicy food. My lamb arrived covered in pepper corns and the spice level was so high (much higher than the previous versions I had gotten of that dish there) that not only my forehead was sweating, I had sweat running freely down the back of my neck. So sometimes maybe the waiter just tells the chef to roll the Scovilles with little thought to how the dish will taste.

What makes a good Hong Kong Noodle Soup has to do with long preparation, so not really a spur-of-the-moment decision.

For the Cumin Lamb, you want to make sure they don’t chintz on the prickly ash or ’ sichuan peppercorns, ’ which are a flower, not a pepper. They provide the ‘ma’ of ‘mala’ cooking which gives it a numbing sensation - so in some ways it makes it seem less hot. I have been told to ask for it ‘ja ma’.

I agree with Steve on the broth. I suppose some servers stereotype customers, but most seem to target a general audience or just cook it the way they like it/the way they think it ought to be cooked. If a sever asks if I want a dish hot, I say yes. If it isn’t hot enough, I add peppers.

Went to East Pearl in Rockville last weekend. Good full menu and it was packed!

What did you order and enjoy?

Sichuan green beans, Singapore noodles, fried squid and the spicy shrimp dumplings were good. I wasn’t a fan of the shrimp balls or half duck. There were 5 of us.