My nephew and his GF are in town for a month and I would like to take them to a hot pot place. Both are Vegan. Do any of the Chinese hot pot places stand out as having more/better options for vegans (broths as well as ingredients, of course) than others?

Also, are there any other good Asian or other ethnic vegan options in town that fly under the radar? I’m sure he will have done his research on dedicated vegan restaurants.
TIA

I’m not in SF, but i can say that after a lot of phone calls I couldn’t find a vegan broth chinese hot pot in manhattan.
I have the best luck ordering off the menu at korean and japanese restaurants (as well as regular chinese). Korean omni restaurants always have a bibimbap that can be made vegan fairly easily, although ask if they have a white kimchi that’s usually vegan the red never is. Veggie japchae, and the fermented soybean paste soup base is usually offered for a version of soondubu. And then there are usually a veggie gimbap and some banchan that are also vegan.
Shabu shabu might be a similar enough experience if you’re not finding vegan hot pot broth, it seems to be fairly common the shabu shabu broth is accidentally vegan.

Terra-cotta warrior works really great for vegetarians. Last time I checked they didn’t use egg in there noodles, but it would be best to confirm

I’m somewhat surprised that vegan is not the default hot pot base for the modal spicy style of hot pot. I looked at the ingredients for several varieties of spicy hot pot seasonings at manila oriental market. None had obvious animal products, And all directed to cook in water. Do restaurants use broth? I took a photo of little sheep’s seasoning mix. 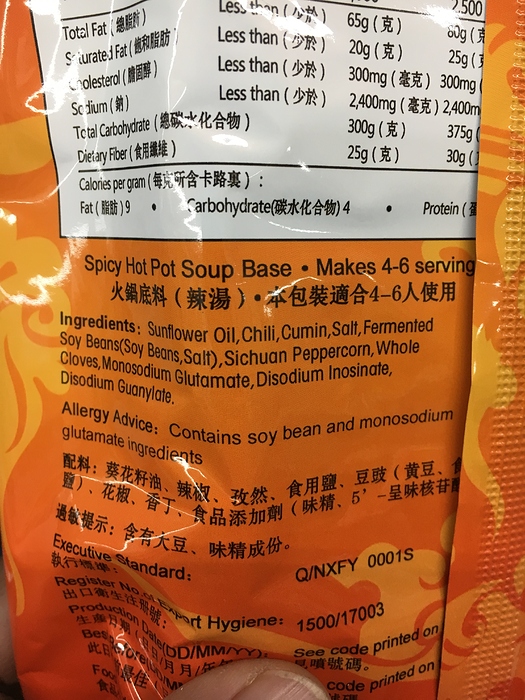 Disodium inosinate is frequently from animal sources, esp in China.

Yikes, thanks for pointing that out. Yelpers report that a “vegetarian mushroom broth” is available at Little sheep. I wonder if it is actually vegetarian, or just vegetarian in the sense that fooled me.

@souperman, one possible lead—- Dragon Beaux has a Miso Konbu Broth (at night).

BTW, Wikipedia says that another food additive typically paired with MSG, Disodium Guanylate, also in the Little Sheep mix, is sometimes derived from fish. Huh—- this and disodium inosate are listed on a few “no dairy added” brands of chips, that people, including a list I found from PETA, assume are vegan (the lack of a kosher symbol might be another clue).