I love pizza–thick crust, thin crust, cracker crust, few toppings or loaded. But I have this weird Ahab/Moby thing going with “Chicago-style” deep dish pies. I’ve never had one I particularly liked.

So I was excited last night to try a new place that’s got all the buzz. You know how the write-ups go… Owner studied ChiPie for years, perfecting this-n-that, so good getting one is an underground, “meet me in the parking lot” deal, etc. Your order must be placed 24 hrs in advance, etc., etc.

Meh again, Chapter 243. Been to Chicago. Tried it lots of places, and other than bulk and weight, I’m mystified what this style has to recommend it over… pizza.

No judgement on those who think it’s pizza (or the subset who actually like it), but I conclude that I’m never going to find a Chicago pizza I’ll like.

I’m with you on this… I used to go with people to Zachary’s in Berkeley. And we would wait in line and they would rave and I would think “Huh, it tastes kind of like a pizza-flavored casserole.” But not pizza.

I’m also totally not a fan. Just doesn’t work for me.

Have you tried making it yourself? I admit I am a fan of the style in general (I love excess!) but I do think the crust sometimes gets in the way. I make it myself in a cast iron skillet from time to time, taking care to ensure that the crust is evenly thin and the toppings are of good quality, and it really is wonderful. It’s certainly a fun kitchen project, too!

The toppings ALWAYS need to be thicker than the crust. The favorite topping is sassage wit lots of browned and stringy moozerell.

It is found on the South Side, not on Wabash Ave.

Perhaps the classic example of a true Chicago pizza is Vito & Nick’s on Pulaski:

There are numerous other fine establishments, known in Chicago as as pizza tschoints, on Pulaski and acrosst da Sout Side serving similar delectations.

And the ONLY thing to drink wit a true Chicago pizza is a plastic pitcher of Old Style.

That other stuff, (often called “chicago-style” but should referred to as doggy-style IMO) is an undigestable large hockey puck made of flour with a can of tomatoes dropped on top and baked until inedible in a skillet. It is for tourists and cake-eating cubs fans from the near North side, but real people from Chicago don’t eat that stuff if they can help it. Unfortunately some people have started chains which have spread across the country based on that crap but it is not a true Chicago pizza.

If you are ever in Chicago again you have to go to Vito & Nick’s or similar on the South Side. You will love it. Guaranteed.

Have you tried nearby Star or Patxi ?

I hesitated to even post this thread, for fear I’d get the equivalent of the usual “Cheesesteak” responses, or spark a spat between New Yorkers and Chicagoans as to which style is best.

The same thing happens when people talk about Cheesesteaks in Philly or muffalettas in NOLA–The one sure response one gets is like yours: “You have to go to S. Philly/Canal Street/Pulaski…” (the inference being no one outside of the neighborhood knows what 'true" is). But in reality, there’s little agreement on what makes a “true” or authentic one even among experts who live blocks apart in THE city or 'hood.

I’m attaching a cross-section photo of the pie in question. I’m sure I’ll be told that crust is inauthentic in some way, and that I’ll have to come to Chicago to get “real” deepdish pizza. Incidentally, I’ve been to Vito & Nick’s.

I think I’ve officially given up on this style “pizza”. 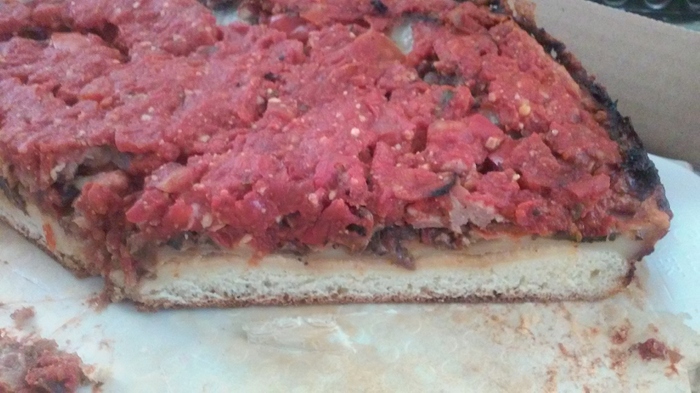 That looks awful. It’s exactly the crap I was describing. How people can say that’s good is beyond me.

I swear that Wabash st is more about the street party than the food.

I’m attaching a cross-section photo of the pie in question. I’m sure I’ll be told that crust is inauthentic in some way, and that I’ll have to come to Chicago to get “real” deepdish pizza. Incidentally, I’ve been to Vito & Nick’s.

That does not look like any Chicago Pizza I’ve seen before. Looks super dry, and too much crust to filling.

Corn meal and olive oil appear to be missing.

Corn meal and olive oil appear to be missing.

It looks like they pressed a regular pizza dough into the pan. Chicago pizza crust is completely different, almost flaky and crumbly.

It was OK. I’m sure this will get me death threats, but I’ve had chain pies I liked better.

Not dry at all, but definitely bready. Soggy, even, except at the rim.

It was OK. I’m sure this will get me death threats, but I’ve had chain pies I liked better.

I find pizza is highly subjective.

It’s also a bit like salmon, you usually return to what you were brought up with.

I haven’t been to Vito & Nick’s in a while, but I may be going back at the end of the month.

So I will check for slippage.

BTW, I didn’t find Vito & Nick’s particularly deep. Do you think this is the “true” Chicago style?

Vito & Nick’s is not deep dish.

A real Chicago pizza has a thin, flaky crust.

That other stuff is for tourists.

Not dry at all, but definitely bready. Soggy, even, except at the rim.

That’s the thing – it shouldn’t be bready. It should be closer to crackerlike, not breadlike. And when I said dry, I was referring to the tomatoes on top – it wasn’t saucy enough. 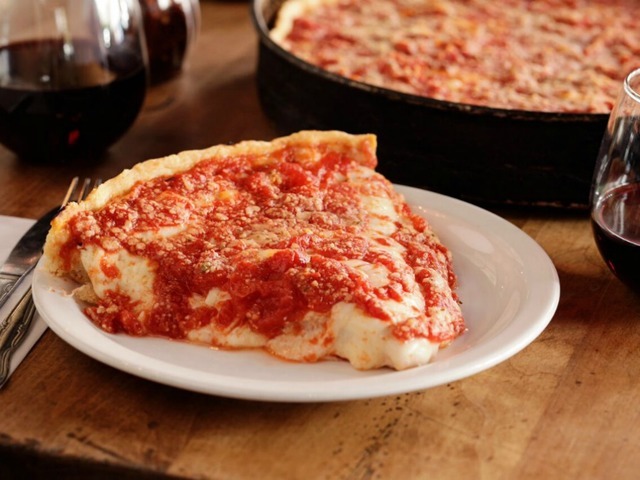 And a pic of Giordano’s: 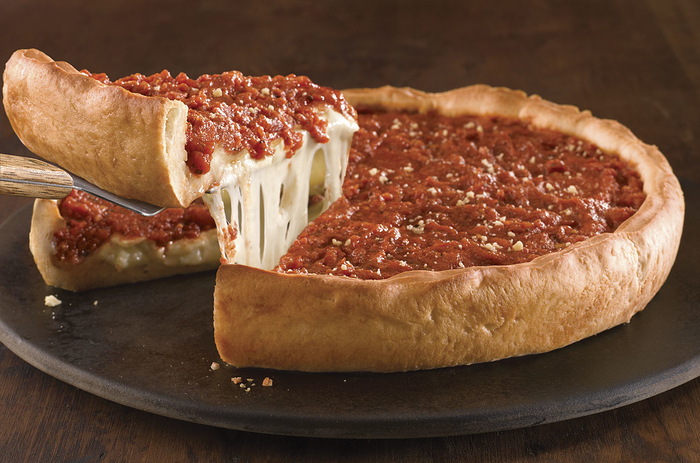 When I make Chicago pizza at home, mine resembles the Lou Malnati’s version – lots of cheese and sauce.

Here is a shot of Uno from the web: 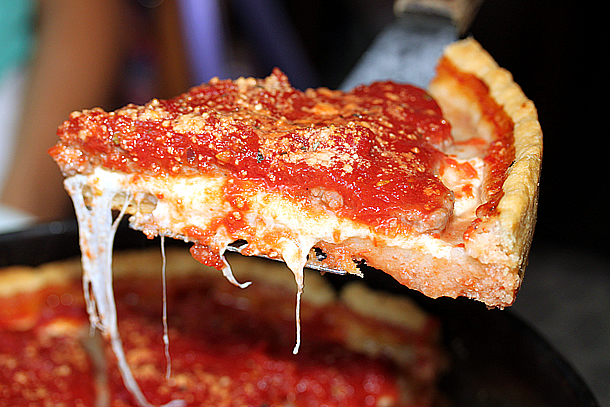 Not that I consider that to be a true Chicago pizza. It was invented in the 40’s by a former University of Texas football player as an alternative to opening a Mexican restaurant in Chicago…