Its getting confusing with all the restaurants called Chef Zhao around here (There’s a Sichuan Chef Zhao in Mountain View). This one, a new Shanghainese restaurant in the Edgewood Plaza in Palo Alto, is open by the same people as Shanghai Garden in Cupertino. I only ate at Shanghai Garden once and wasn’t planning on a visit until somebody claimed that their XLB was better than DTF’s. So I paid them a visit.

I will compare the XLB to my personal favorite around the peninsula and south bay- Panda. The skin was thinner, and felt like it had more gluten in it. Its also easier to break. The craftsmanship was a bit more haphazard vs Panda’s. The meatball tasted more ‘complicated’ and ‘restaurant-y’ but its not as fresh/ high quality as that of Panda’s, which tasted more homey and simple. The soup was a bit on the salty and one dimensional side. Its ok. $8 for 6. Sheng jian bao was fine. Same meatball and soup inside as the XLB. The fried nian gao (rice cake) was recommended to us. We saw the other table with Shanghainese people eating the soup nian gao and asked the waiter. He suggested the fried version instead. Greasy. Based on the three dishes, quality was comparable to Shanghai Garden in Cupertino, which was ok, but not worth driving far for. The search for the elusive great Shanghainese restaurant continues. Thanks for the note, I had missed the opening. Wonder what you think of Now added to my search to eat all the restaurants of PA.

Here are some of my underrated dumplings of the peninsula:
Bamboo Garden - easy to get to, my chinese co-worker says “it’s all about the dumplings”
Tai Pan / Steam - harder to get to & park, choose whether you like quiet atmosphere or more rowdy.

Wonder what you think of

Can you clarify the question?

Bamboo Garden - easy to get to, my chinese co-worker says "it’s all about the dumplings"Tai Pan / Steam - harder to get to & park, choose whether you like quiet atmosphere or more rowdy.

Its been a while that I have been to Bamboo Garden. So I only remember that its a positive XLB experience. Don’t recall I had other dumplings though. Is that what you had?

Taipan/ Steam- My wife commented that the dimsum like hargao were real tiny. So I have never been…

I finally made it to chef zhao.

I really, really liked the XLB & SJB. Flavor was good… juice was good… wrapper was thin.

The rest of the menu is actually quite small, and we only had two non-dumpling dishes. I can’t figure out what they really specialize in, although they say Shanghai-ese, they have a smattering of other thing. They don’t have a lot of other dumplings - just won tons, I think.

Re: haven’t gone to steam because the portions were small. The portions are small there, although I don’t remember the har gow being particularly small. The good news is that - FOR PALO ALTO - the prices are low per dish. I think we end up eating more dishes and leaving appropriately full at a reasonable price. But — we don’t take an extra meal’s worth of take out home. If that’s a deal-breaker, I understand.

re: bamboo garden. I’ve had some kind of mixed “budda’s delight” kind of dish, ordered in chinese by my friend. I’ve puttered around the rest of the menu. But really it’s about the dumplings. Portions are normal ( unlike steam ). 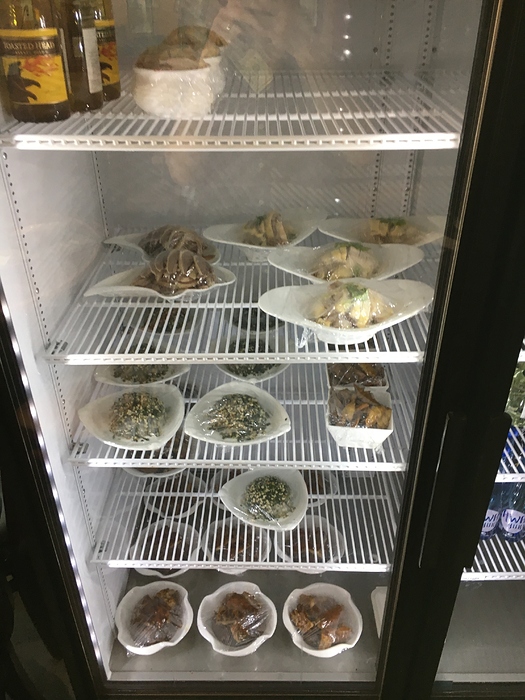 @bbulkow, I can see why you said it’s difficult to see what they specialize in— the menu on the screen above the cash register doesn’t list the cold Shanghainese dishes (malan bean curd, drunken chicken, etc.). They are listed on the paper menu, and are kept in a refrigerator in the eating area or behind the counter for takeout. I didn’t realize this until after I ordered, but went for a second round and enjoyed the stewed bamboo.

Salted and pepper prawns were the deep fried, shell-less, thick coating variety. Batter was crisp, not cakey, and airy, but the shrimp got lost.

The comments above didn’t mention how much juice was inside the Sheng Jian Bao. My curiosity was sated as I watched a woman bite into one only to have it explode on her shirt. I’ll try them next time!

The SJB are really good, but hard to eat. The crust is extra crusty, which means you have to bite harder and break through, and the soup/juice level is high. When I find myself missing SJB I come here…

I’d love to get there on a weekend to try the xian doujiang and see how it stacks up against the stellar version I had at Shanghai House.